The Morning After: a.m.BS Sets a New Standard for Breakfast Takeout

Con: It is a pop-up, so the supplies are limited (if it’s nice out, get there early.)

It is no secret that opening a restaurant can be a financial nightmare. For the entrepreneurial chef, cutting overhead costs — where rent and ingredients rank at the top of the list — is only the first of many obstacles that block the road to independence and success. One way to address both issues, however, is to cater to Americans’ mobile lifestyle by making quality food that can be consumed on the go. Drive-thrus, high cholesterol and greasy fingers number among the more common associations with “fast food.” However, some thrifty chefs have dug through to the ethos of time-consciousness and turned to the food truck and the humble street-food eatery as scaled-down solutions to the issue of cost. One such chef is Jared Brant, whose new pop-up breakfast sandwich shop, a.m.BS, is a welcome addition to a city where it’s surprisingly hard to find a quality breakfast sandwich… 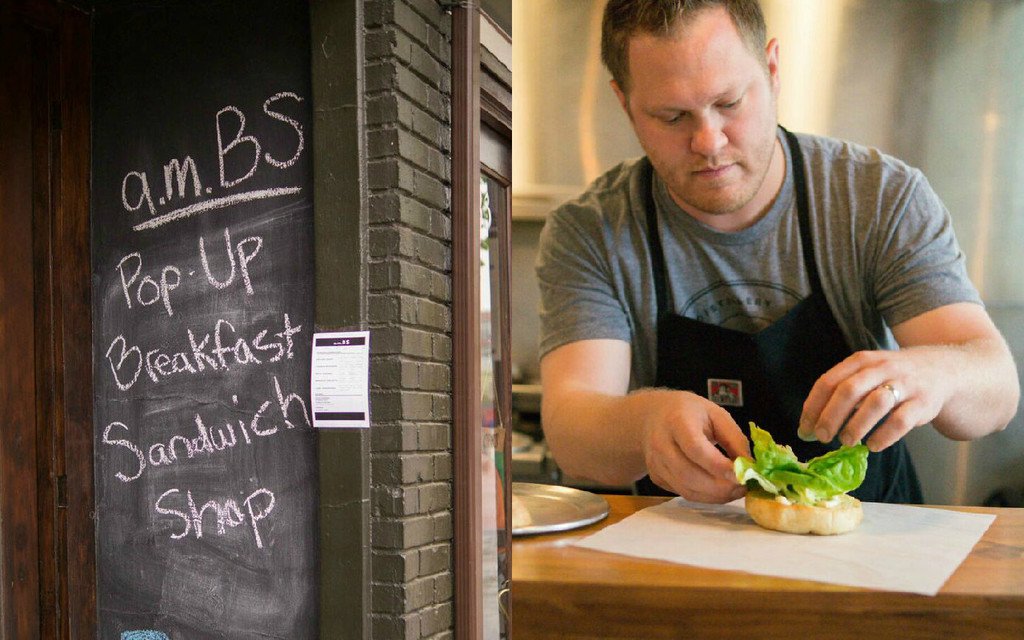 All Photography by Kiddest Metaferia

Like all seasoned cooks, Brant has worked in many kitchens and in many different capacities within them. After years of slugging it out in some of Denver’s standout restaurants— such as Mizuna and Bones — Brant wanted to stake his own claim and contribute to the new era of rapid growth that is currently taking place in the city. Of course, at the outset of such an endeavor, it helps to know some people:

“[To the Wind chef/owner Royce Oliveira] heard that I was working on some pop-up concepts, and he called me to see if I’d be interested in doing my own thing out of his restaurant on Sundays. It seemed like a great opportunity for me to get my own business started, whatever it was going to be,” said Brant.

After sorting through his ideas, Brant decided to go with a concept that featured a simple menu of breakfast sandwiches. “I wanted to do breakfast sandwiches that had quality ingredients and could either be eaten in the restaurant with mimosas or taken down the street to City Park. We decided to skip the traditional brunch sit down service that can ultimately end up taking two hours just to sit down and get some eggs and potatoes,” he said.

Brant has secured To the Wind’s space (which itself is a remarkable, unpretentious take on fine dining and the brainchild of Oliveira and his wife Leanne Adamson) for at least May and June but beyond that, he is unsure of what will become of a.m.BS. Bottom line: it’s in your best interest to get in to try the food while you can. Armed with just over a hundred Black Sheep Bakers house rolls, and the various fixings that comprise a.m.BS’s four sandwich selections (the fifth is a cheeseburger on ciabatta), Brant and his sister Caitlin, who runs the front of the house, open for business on Sundays at 8 a.m. Over the past month the shop has been in operation, it has been selling out of product by 1 p.m. 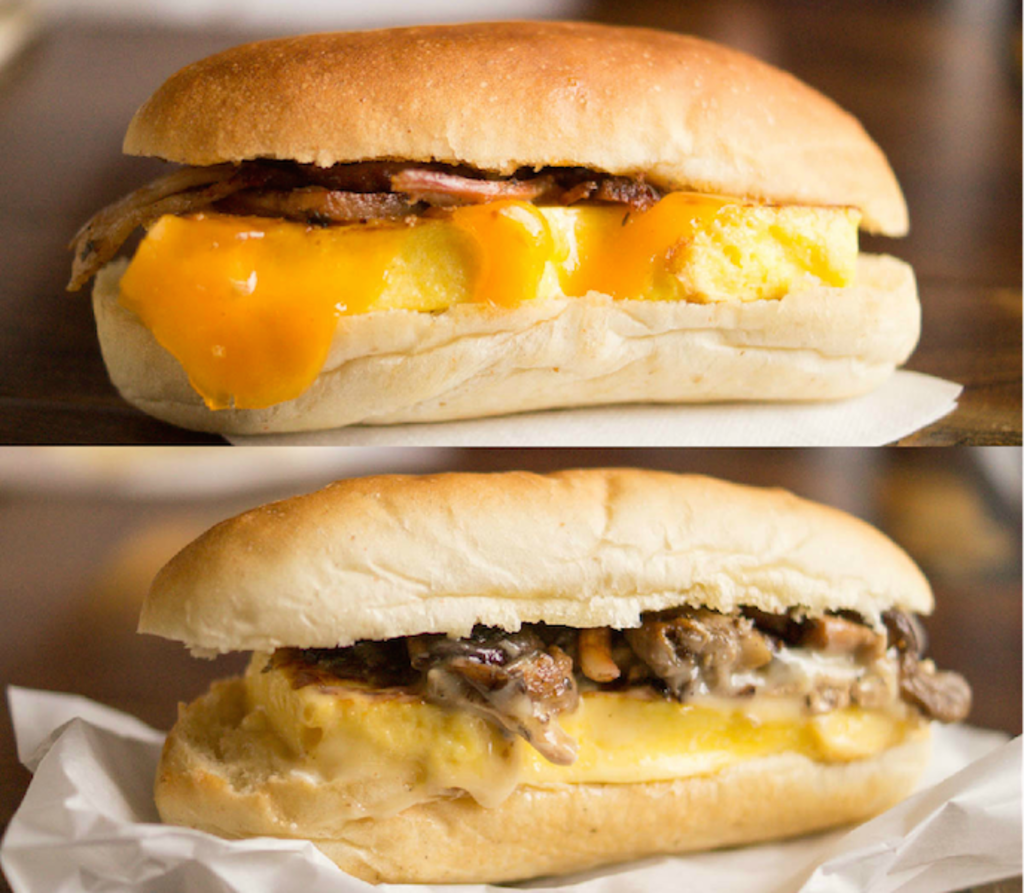 “I love eating brunch but haven’t ever been a huge fan of cooking it,” said Brant, which, if you ask around, tends to be a fairly consistent sentiment among chefs (to some, it seems the monotony of cooking egg after egg early in the morning rivals some of the worst torture imaginable). In order to cut down on this boredom factor — and to better accommodate Black Sheep’s rolls — he devised a unique method of preparing the eggs. He whisks a whole case of them in a chinois, adding half and half and salt, pours the mixture in a hotel pan lined with parchment paper, then bakes it to a uniformly fluffy consistency. As each sandwich is made to-order, he later slices the baked egg into neat rectangles and sears them on the grill.

A standard egg and cheese ($5) made with Tillamook cheddar is available for the purists, but the foraged mushroom ($6), spicy avocado ($6), and breakfast porchetta ($8) all bear the mark of expertise, and collectively make one pleased that Brant chose a.m.BS as the winning concept from his list of ideas. To this writer, the porchetta is the clear frontrunner, its “breakfast sausage style” pork roast a dreamy supplement to the soft middles of the bread and egg. While the pairing of truffle salt and tallegio pack a well-placed punch to the palate, Hunt and Gather’s rich mushrooms may too strongly evoke a distinctive taste for some, so be sure to know that on the one-10 scale of mushroomy taste, the foraged mushroom sandwich lives up to its name. Also, if you don’t have any issue with a big start to your day, Brant’s a.m.BS cheeseburger ($9) with ricotta pimento cheese spread may subtly be one of the best burgers out there.

If you’re able to take advantage of the first come first serve seating, a.m.BS offers mimosas and blood marys for $7 and $8 respectively, or you can get fresh squeezed orange juice or Pablo’s coffee to-go.

Editor’s note: 303 Magazine spoke with Jared Brant and confirmed that he, in partnership with his sister Caitlin, are the sole operators of a.m.BS, and not with Todd Somma (as otherwise reported, not by this publication). We reached out to Somma for comment and he was also able to confirm this story.