Fans amassed at the Ogden Theatre last night for a sold-out Hot Chip show. The night started promptly at 8p.m. when blue lights flashed and opener Late Night Radio took the stage in his signature lighted animal mask. As the dance music wafted through the speakers, he began beating two single drums furiously, giving a tribal feel to typical electronic music. He really heated up the room, never stopping for a moment and even creating a high-energy drum circle when he jumped into the crowd with his drum and allowed the fans to swarm him while he continued creating his signature beats. Who knew just one guy standing on stage with a laptop and two drums could make such awesome music? I think he converted some to believers last night. 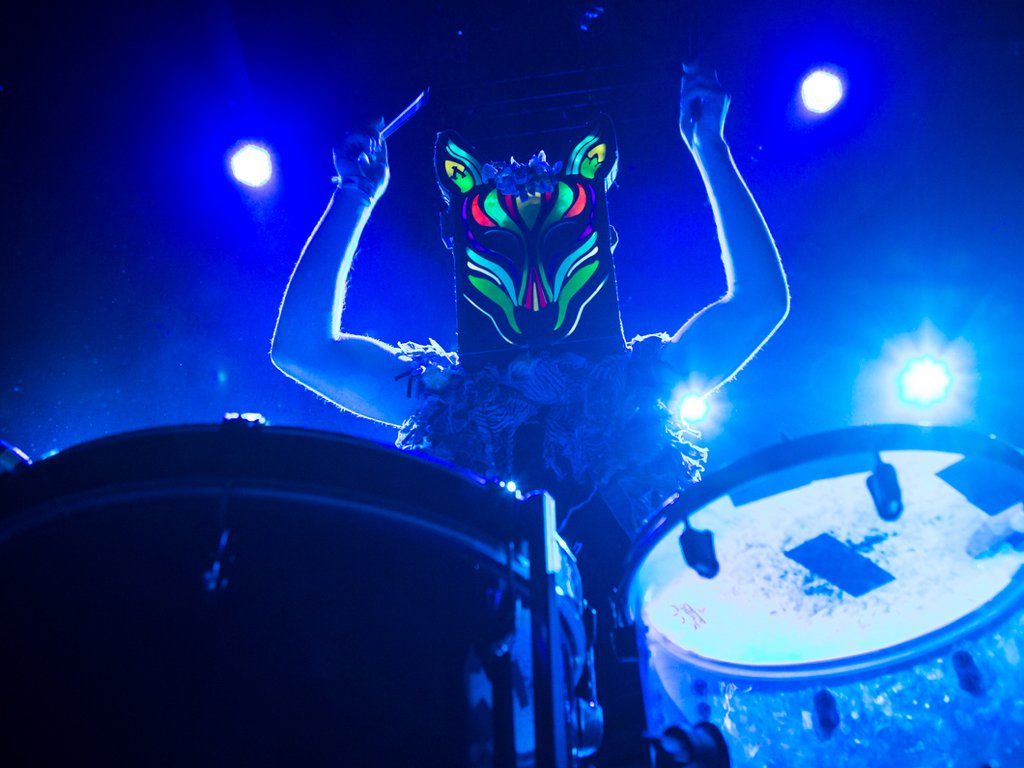 The crowd at Hot Chip was as eclectic as you would imagine for this eccentric UK group, whose outfits were singular to their on-stage personas.

Founding member Joe Goddard held down the keyboards and additional vocals in a sweater fit for Christmas. Alexis Taylor, whose signature voice is much the heart of the Hot Chip sound wore a yellow bucket hat and a shirt with neon dinosaurs. Guitarist Al Doyle looked like a hip Beetlejuice in a pair of oversized black hammer pants and an XXL white tall tee, his crazy blond hair spiking out. Owen Clarke wore a striped blue and white tee with a jacket on top, dancing like a ship captain after a few glasses of champagne. Drummer Sarah Jones looked dainty and ethereal in a white romper, while smashing percussion into submission. Felix Martin held down back stage right with synths and drum machines, downplaying the style of the others. And then there was percussionist Rob Smoughton, who looked like Fidel Castro on vacation, donning a Tommy Bahama-eqsue shirt, white linen pants and a white fedora. One might say, at times, I was a bit more enthralled with the ensemble choices than the actual show. 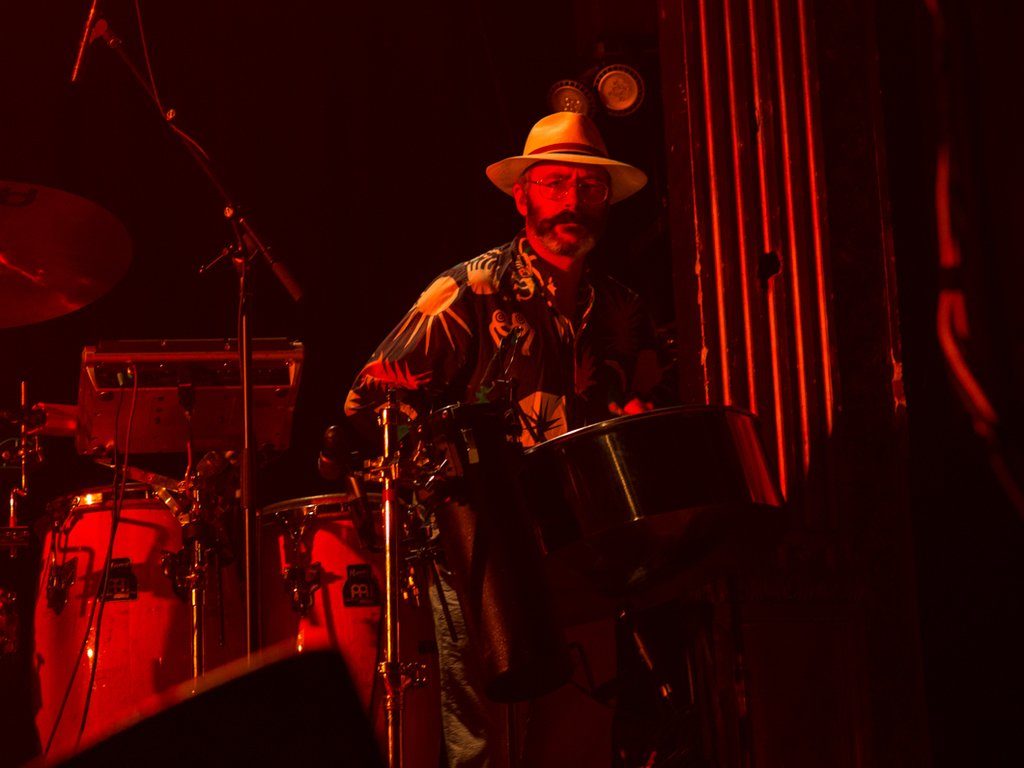 Together, these crazy outfits comprised a live Hot Chip. They romped on stage and kicked the night off with “Huarache Lights,” the first track off their newest album Why Make Sense? The dynamic dance track sent audience members to their feet. Between four synths, drum machines, two sets of actual drums, guitars, supporting vocals and keyboards, you’d think Hot Chip’s sound would be too much of just about everything. But somehow the band jives seamlessly to create a full, sometimes housey, sound that’s made for both big rooms and small, intimate venues.

Next up were tracks “Night and Day,” “Easy To Get” and “Started Right,” each of which was a little slower than the last. The first was a heavier, house track, keeping the momentum going. The second two were off their new album and took on a slower, swirling sound, which carved some time in a show that could’ve been pegged on just dance music and dueling synthesizers to showcase the band’s range with vocals and slower-tempo artistry. 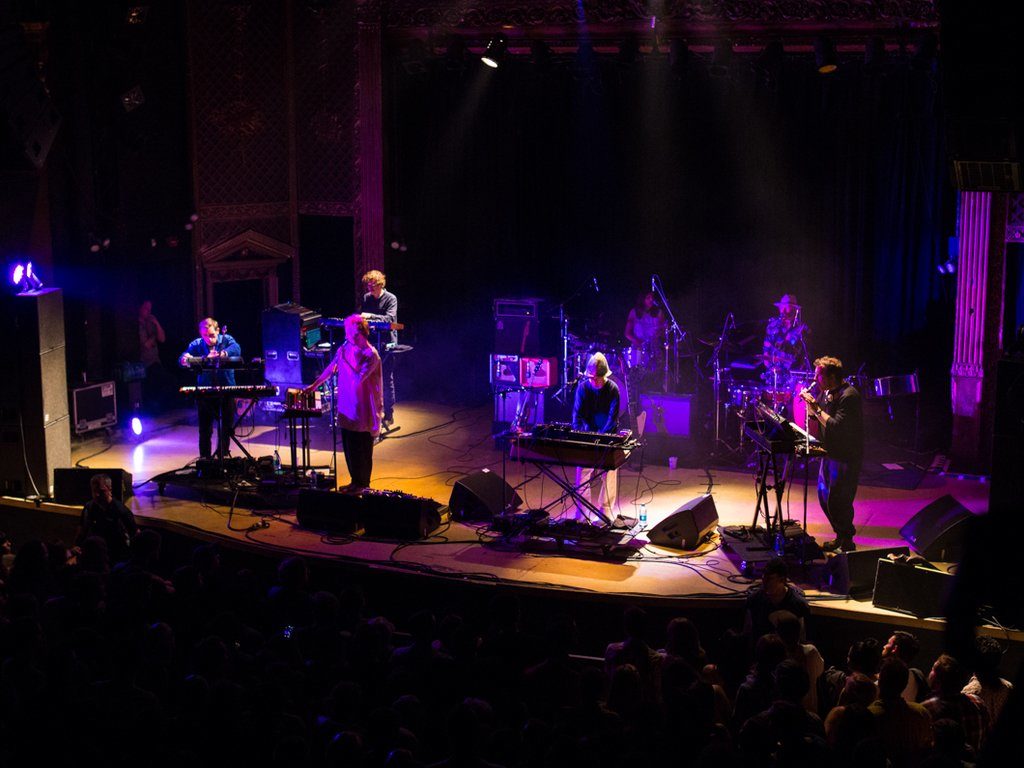 By now the band had their groove stamped into the floor of the Ogden stage and turned it on for tracks like “One Life Stand,” “Flutes” and—a personal favorite—“Over and Over,” from their hit album The Warning. During “Flutes,” the band incited a choreographed dance to the chorus, shuffling their feet to the lyrics, work that inside outside work that more, work that right side left side more that more.

They followed up with “Need You Now,” a dancier track from their new album, which proved to be somewhat of a struggle for some members, who couldn’t seem to get the vocals at the right volume to layer effortlessly. But they held on and brought down the house with “Ready for the Floor,” a track driven by an unmistakable drumbeat background, laid overtop swirling synths and Taylor’s distinctive vocals.

Hot Chip’s encore seemed lacking, compared to setlists I’d seen from past shows. With the high-tempo framework, they seemed to miss the mark with slower tracks that dragged on for a bit. They closed with a cover of Bruce Springsteen’s “Dancing in the Dark,” which also lacked the unique Hot Chip luster. The band is wonderful and their songs are unique and memorable, but this live show could’ve seen more of something. Until then, here’s to hoping Hot Chip returns for another Denver run and plays a longer set, because a band with seven albums has a lot more to offer than last night’s poorly-chosen set. But let’s blame it on their song choice, because those dudes (and chick) are some talented homo sapiens.