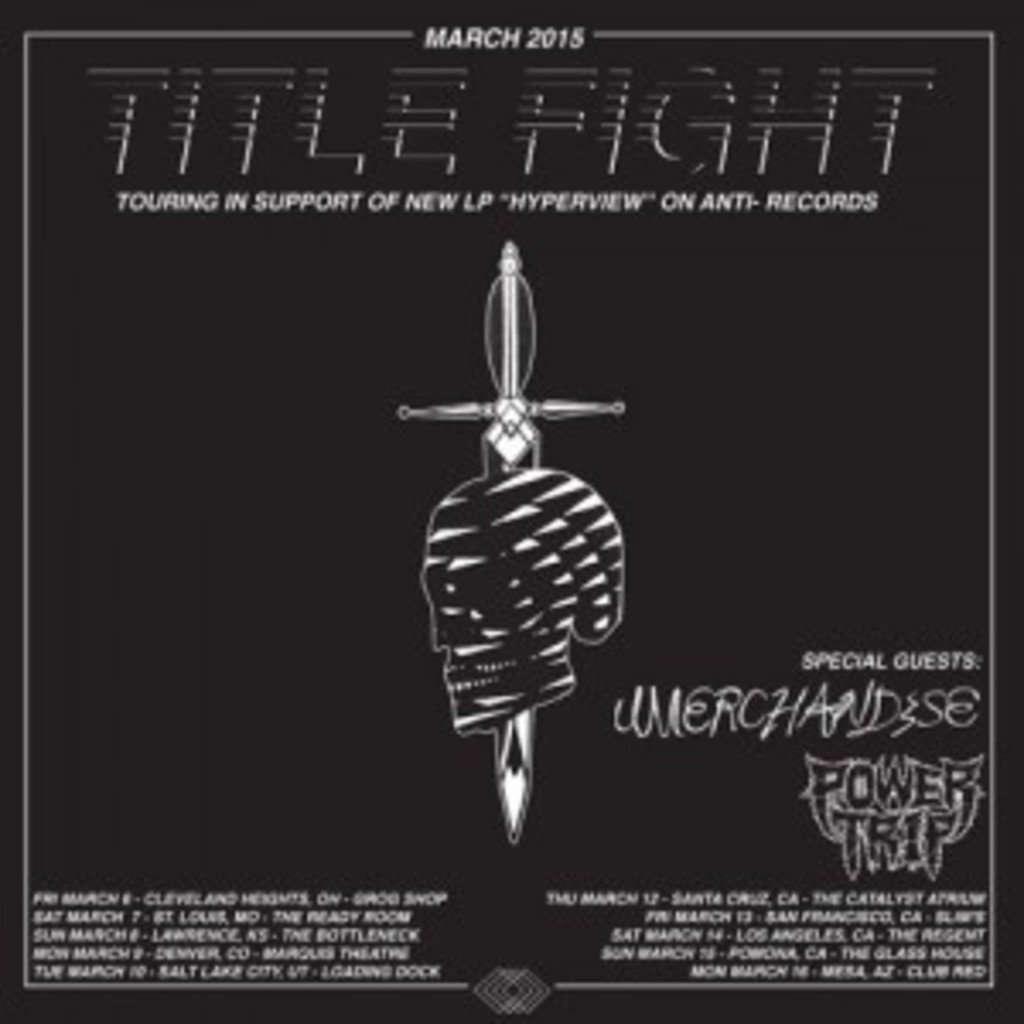 Title Fight Headline a Diverse and Energizing Show in Denver

The Marquis Theater was packed on Monday night when Kingston, Pennsylvania’s Title Fight stopped in Denver for their headlining tour in support of their new album, Hyperview. Playing alongside the pop punk/shoegaze quartet were crossover/thrash metal band Power Trip from Houston, Texas and post-punk band Merchandise from Tampa, Florida, making this a very diverse, but consistently energetic show, complete with plenty of stage dives and crowd surfing. 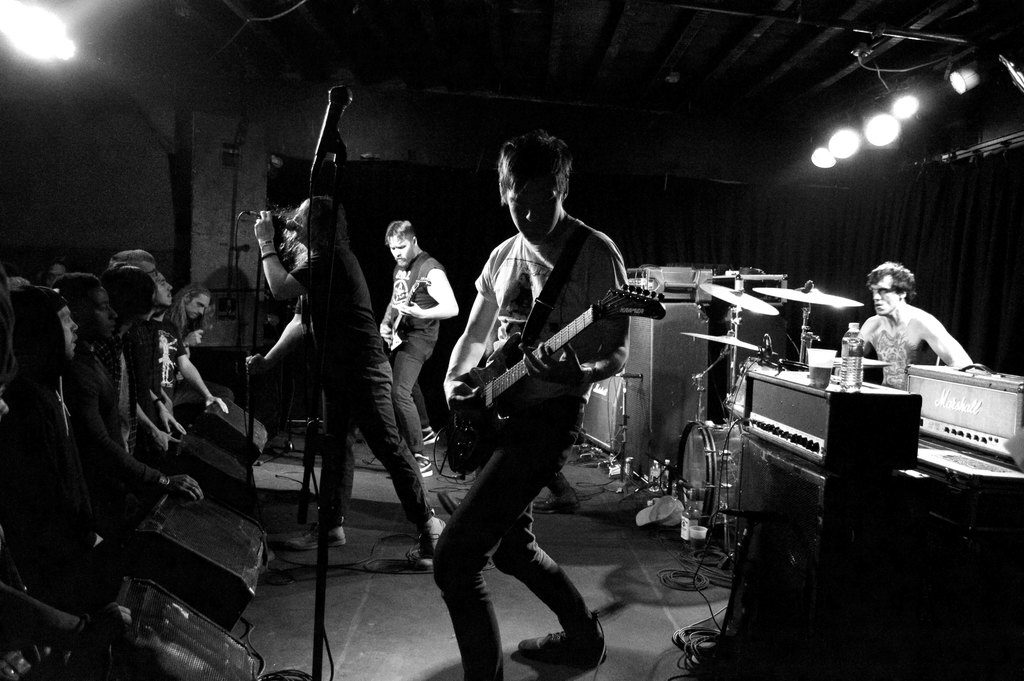 Power Trip performs at the Marquis Theater on March 9. Photo by Aaron Lambert

Kicking off the night was Power Trip, who wasted no time in getting the crowd pumped and all riled up for the next two bands. These guys absolutely killed it live. Guitarists Chris Ulsh and Nick Stewart plowed through riff after riff, solo after solo, and their hands and fingers moved in amazingly tight unison. Frontman Riley Gale did a fantastic job of commanding the crowd, encouraging participation on their part and interjecting a casual humor between songs. 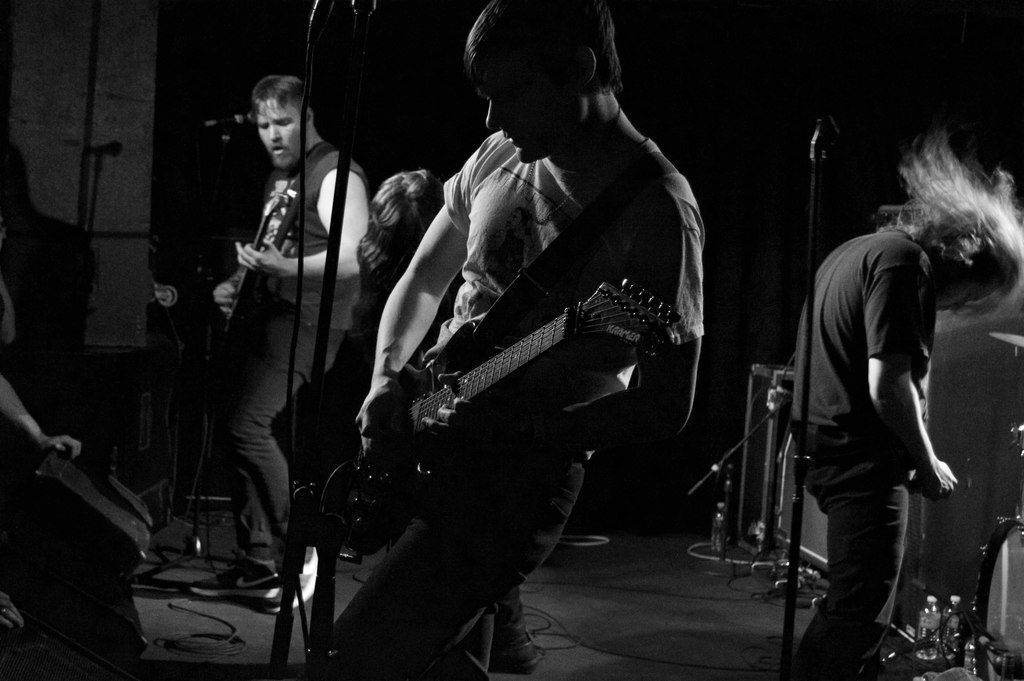 Power Trip performs at the Marquis Theater on March 9. Photo by Aaron Lambert

The Marquis is a perfect venue for the kind of music Power Trip play because no barriers separate the crowd and the stage, providing ample opportunity for attendees to get up on stage and jump off of it, which happened countless times during Power Trip’s set. The band performed many cuts from their excellent 2013 debut album, Manifest Decimation, but made no mention of any new songs or whether a new album was in the works. Hopefully, Power Trip will find time to put out some new material this year, because this young band plays with the same vigor and attitude of some of the most seasoned veterans. 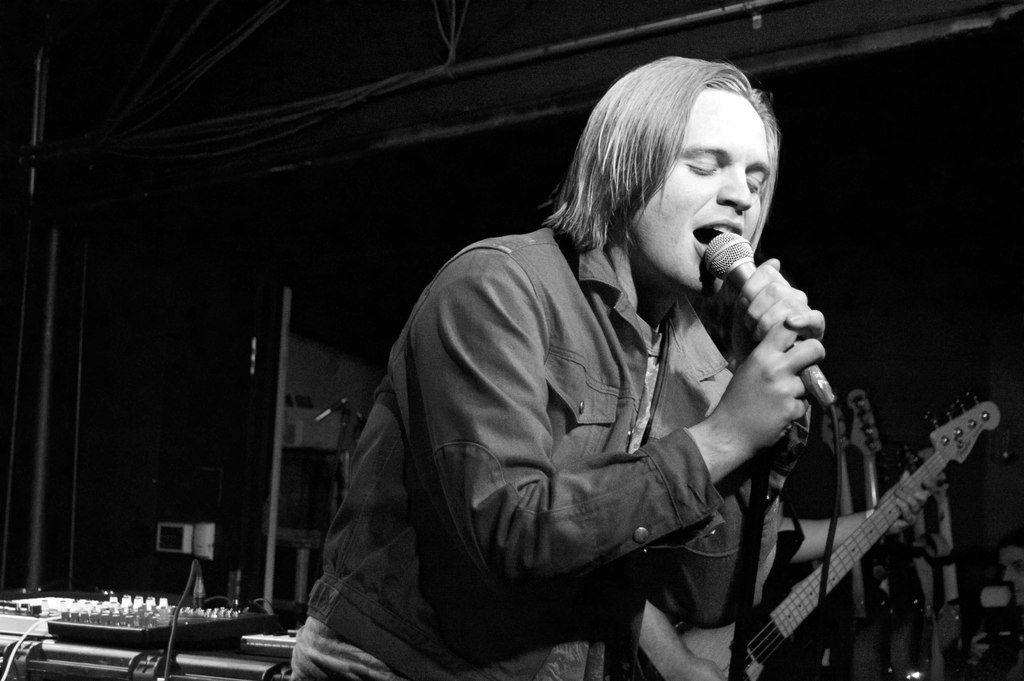 David Allan Coe of Merchandise performs at the Marquis Theater on March 9. Photo by Aaron Lambert

Power Trip played a hard set to follow, and unfortunately Merchandise were a bit of a buzzkill on the energy level. Easily the most different of the bands on the bill, Merchandise’s set consisted of spacey, bass-driven tunes interspersed with frontman Carson Cox, aka David Allan Coe’s reverb-heavy vocals, who wore a bright red jacket with his name printed across the back of it. The musicians that make up Merchandise were talented in their own right, especially guitarist Dave Vassalotti, who was entertaining to watch perform, but their music was much more chill and poppy. 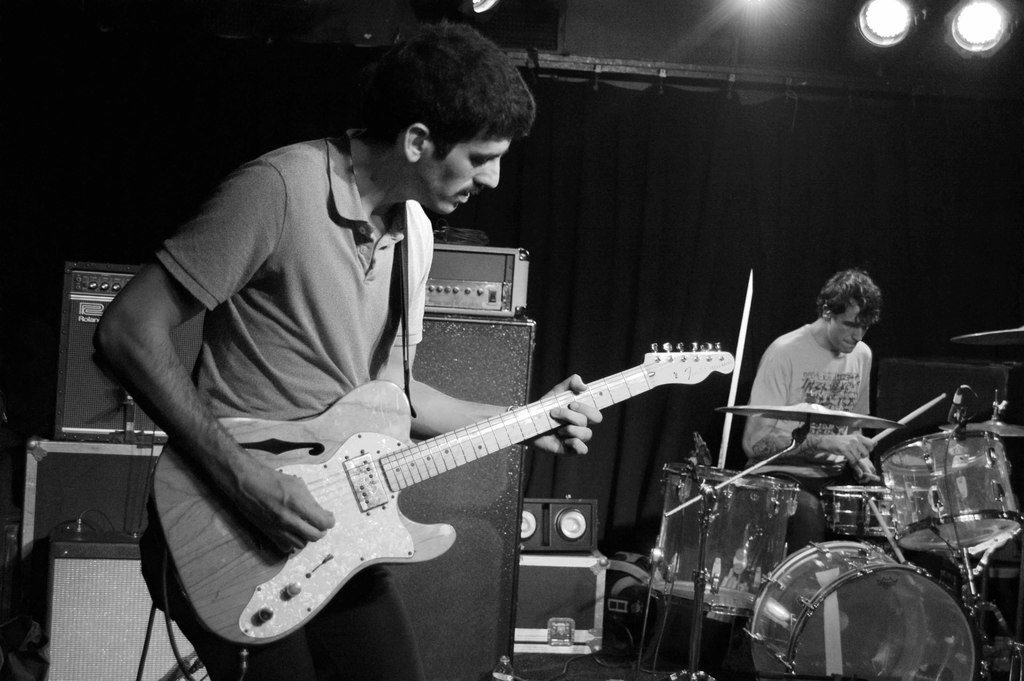 Merchandise performs at the Marquis Theater on March 9. Photo by Aaron Lambert

That said, the crowd seemed to enjoy their set. Whereas Power Trip incited several mosh pits and crowd-surfing sprees, Merchandise found a simple groove that made it easy for the audience to dance and sway to, which they did. Aside from their frontman’s apparent ego and the random, tangential things he would say between songs, Merchandise played a solid set that allowed the crowd to take a breather before Title Fight hit the stage. 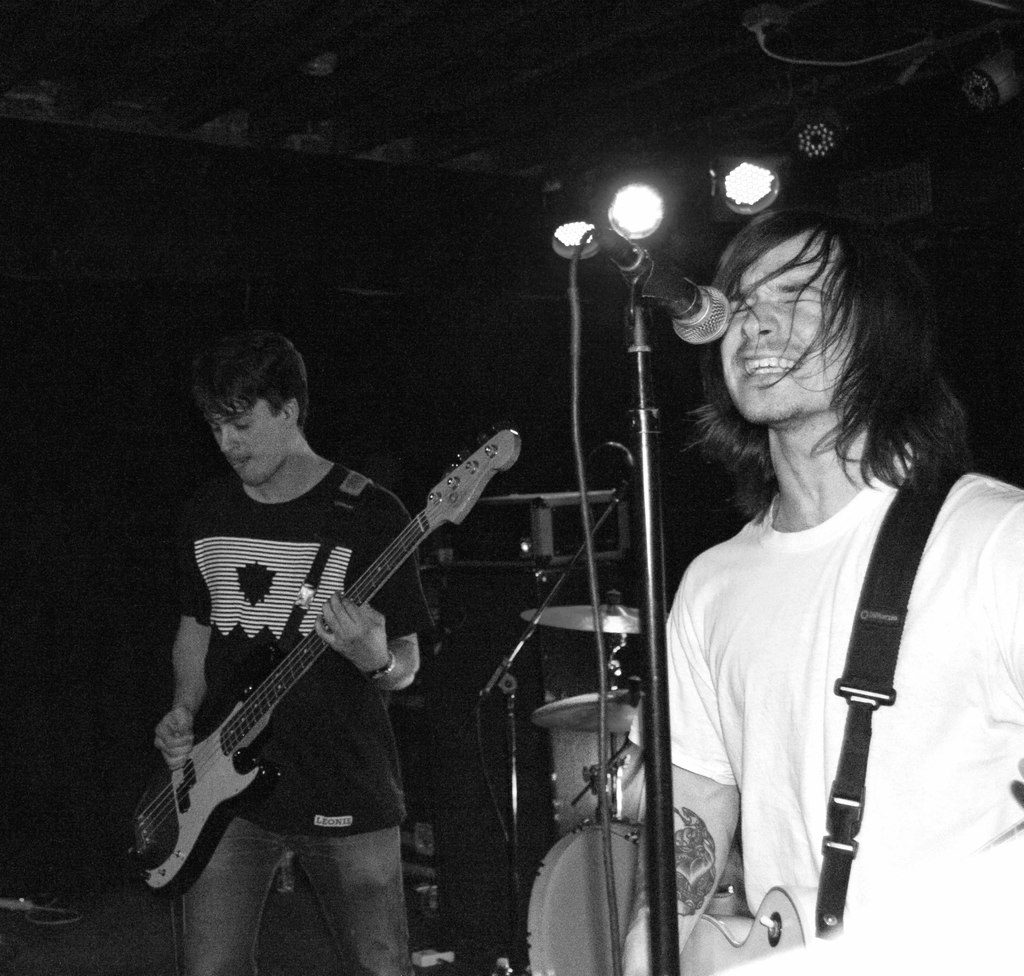 Title Fight performs at the Marquis Theater on March 9. Photo by Aaron Lambert

The floor of the Marquis filled up before Title Fight went on, making it clear that most in attendance were here to see them. The band released their new album Hyperview, on Feb. 3, and much of their set consisted of songs from the album. They opened with the softer “Murder Your Memory,” the opening song from Hyperview, which led into the song “Shed” from their 2011 album of the same name. At this point, the crowd blew up. It seemed like every single person in the audience knew the words to this song, and they screamed them loud enough to almost drown out Title Fight vocalists Jamie Rhoden and Ned Russin. 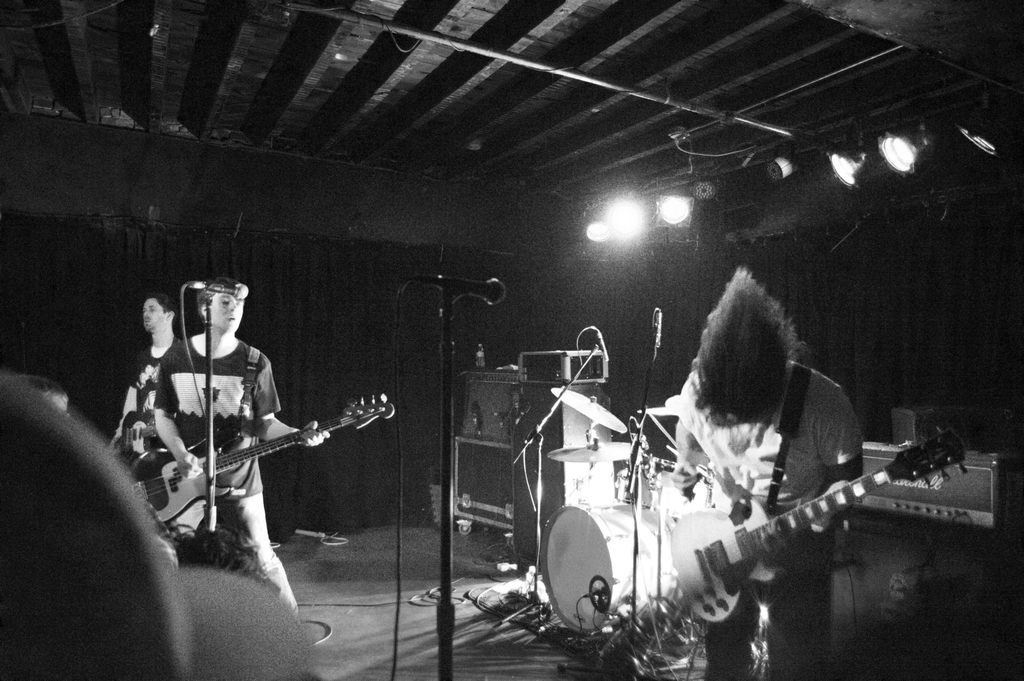 Title Fight performs at the Marquis Theater on March 9. Photo by Aaron Lambert

The band played songs old and new alike, and not once did the energy level of the crowd appear to falter. Someone always seemed to be crowd-surfing or jumping off the stage, and Title Fight only fed off of this. They played a super tight set, and they were so well-received by the crowd that it’s very likely they left Denver feeling more confident as a band than ever. By the end of the night, everyone appeared to be worn out, but all had a huge smile on their face, signifying a show well done.

All photos by Aaron Lambert.

Check out Title Fight’s new album “Hyperview” over at their Bandcamp page.