By definition, collaborations means working together where the parts of a whole come together to create something grander then each individual piece. In this instance, Collaboration Fest was less like a puzzle and more like a magnet that brought together the inevitable.

This second annual beer festival is the culmination of all those efforts and a love for something that runs deeper than the bottom line. So when over 100 breweries from across the nation group up and decide to brew beer together, great things can happen. We decided to ask some of the brewers involved about their collaborative experience, what it means to be a part of an industry that thrives on working together and strengthening each other, and the endless creativity possibilities of brewing beer.

Importance of Collaboration and Camaraderie 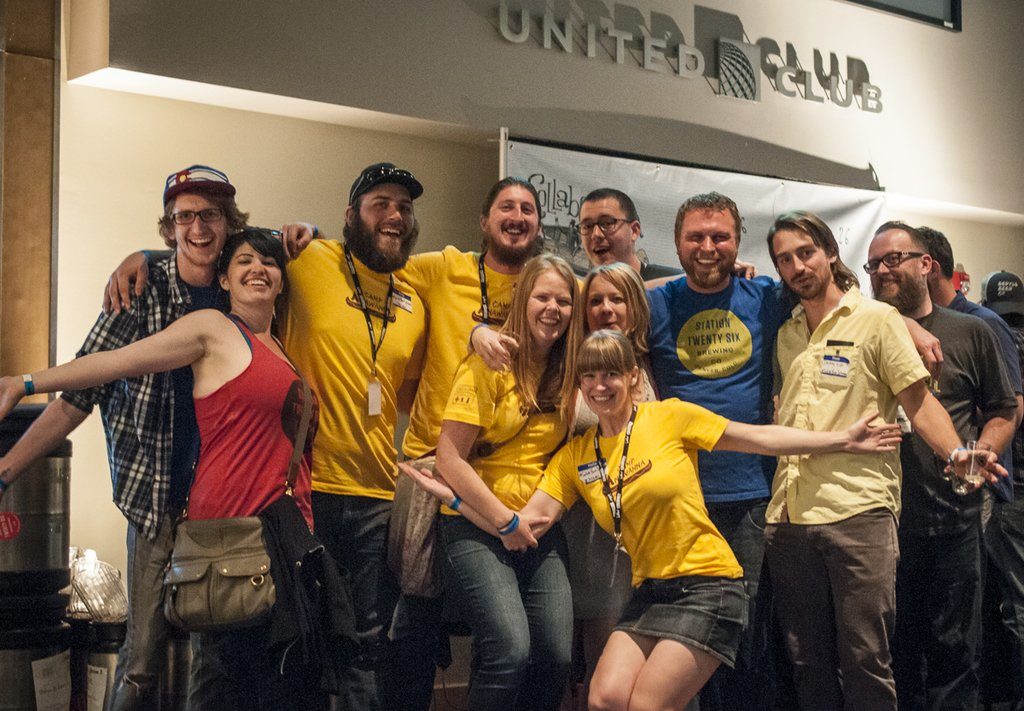 Many of the brewers involved at Collab Fest mentioned how the brewing industry is unlike almost anything else. It’s a cohesive whole instead of many competing individuals. The goal of Collab Fest was exactly this: proudly display craft beer as an industry leading in a friendly, exciting, and slightly intoxicated way.

“A lot of industries have a Coke or Pepsi mentality…Which is smart of course, but marketing-wise Coke and Pepsi don’t hang out together to further themselves. The beer industry [hangs out]. [Collab Fest] is the exact representation of that…it is a true friendship meeting in the largest growing industry in our state, if not the entire country. I just walked around and got to talk to 30 people I know” — Sean Dugan from Elevation Brewing

“It’s not a gimmick to make money, we really like each other and want to hang out and make beer. We are all really lucky people.”- Taylor Witt, one of Colorado’s representatives for Stone Brewing

“I really truly feel like it’s one of the cooler festivals in the entire world… it allows folks like us to team up with folks like Justin and Wayne up at Station 26… Justin is the man, he allowed us to come into his place of business, takeover his brewhouse and his tank.” – Jesse Brookstein, future tap-room manger at-soon-to-be-open Call to Arms Brewery and previous employee at Twisted Pine and Avery Brewing 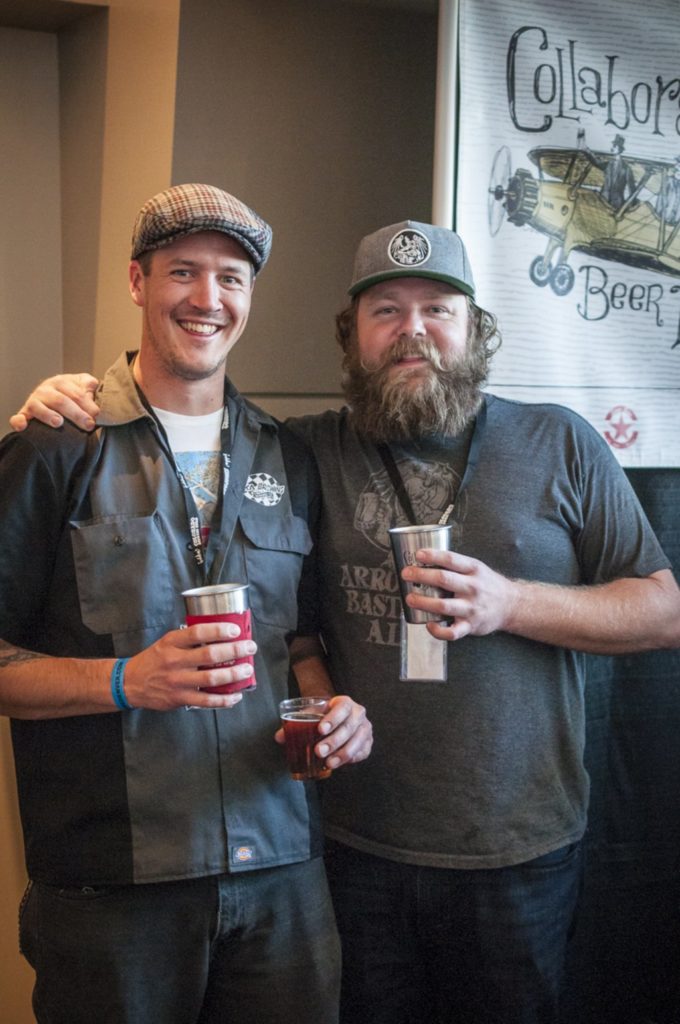 Brewers from Ska and Stone sharing a beer

A few of the collabs had the pleasure of reaching not just across town but across state-lines. As we mentioned earlier, Collaboration Fest featured brewers from California, Colorado, Wisconsin, Pennsylvania, Texas, and a myriad of other states all inspired by one thing: doing something different and unique together…

“I’m also from Pennsylvania, so that’s part of the reason why I connected with these guys. We used full pint base malt which they modeled after Maris Otter malt and we added Cascade hops from Pennsylvania and cascade from Colorado. We wanted to do something that would show off both contributions.” – Brian Connery, brew master of Dad’s and Dudes

Sean McKesson, one of the current brewery heads for Ska Brewing  worked with Stone Brewing from California. He had previously brewed with Stone and formed a familial-like bond with the company. So when the opportunity arose, all it took was a few emails and phone calls to Chris Cochran from Stone to make it all come together:

“We just emailed back and forth,” said McKesson. “I said, ‘Hey I have this beer that I want to brew that was super good, maybe we could base it off that.’ We tweaked it and made it bigger. He then threw in his two cents about what ingredients to add.” 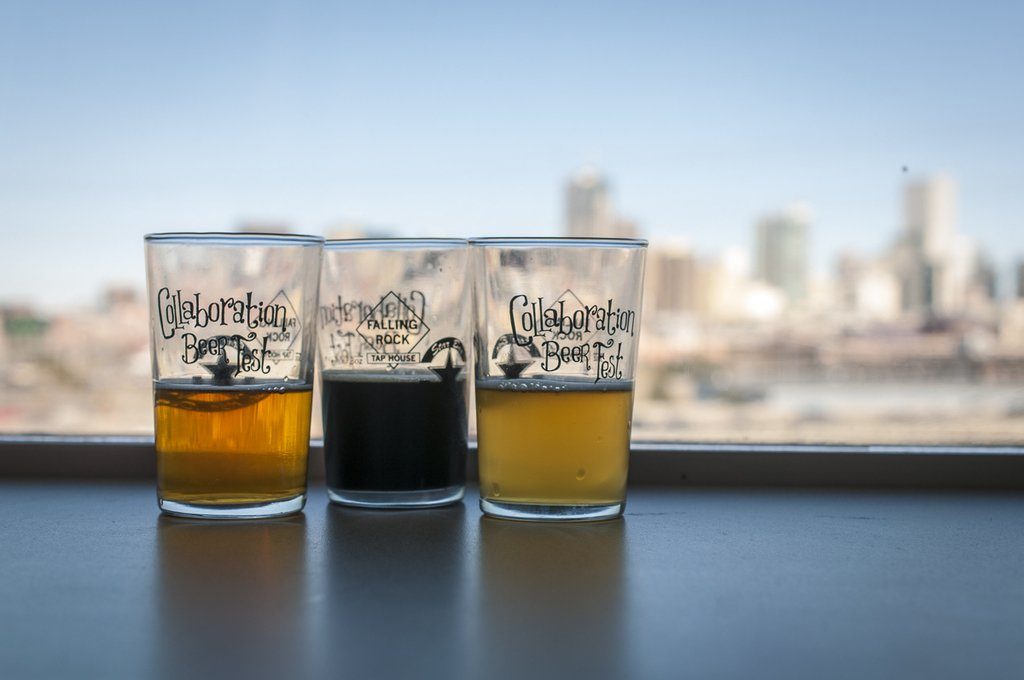 Since everyone has praised what it’s like to work in the industry, did that mean any good beer came out of it? Yes. Indeed. Many delicious beers were brewed at this event, but what made it special was the range of  truly unique beers created. We spoke with several brewer’s about some of our favorite beers including particularly interesting collaborations such as the resurrection of a an Denver favorite, why you would brew malt liquor for a beer festival, and the craft of making a perfect Dutch…

“It’s an imperial coffee stout. We used ouzo coffee, which is a nice blond roast and it’s very smooth. It’s awesome on nitro, but its still a very good beer.”- Kaczeus, owner and brewer for Bootstrap.

“It’s a hoppy Belgian Trippel ale, perhaps a triple Trippel IPA. ..Ska brought a fair amount to the table. We have been friends for a long time. They brought the recipe. [Stone] likes to do things really hoppy, so that was out influence.” – Witt, one of Colorado’s representatives for Stone

Tivoli brewing, famous for its historically-influenced beers from Denver’s past, paired up with Wynkoop for the Double OG imperial malt and with Zwei Bruder for Pass The Buck. The buck-style beer reigned king during 1850s and 1870s in Denver, it was the beer of choice. It gets its name from the Bach-style German beer:

“It’s called buck because traditional German would never call something that wasn’t a traditional lager a bach,” said Corey Marshall, founder and CEO of Tivoli Brewing. “So we brought it back.”

“We were deciding what to make.Everyone is going to be coming out with their Belgian barrel aged, double IPA, trippel, quadruppels, whatever, but no one is going to make an imperial malt liquor. I like tasting things I’ve never tried before. Creating with weird things. So I had zero benchmark — because then there is no failure — only success.” – Dieter Foerstner, head brewer of Tivoli

Events like this are as much fun as you make them, whether you are part of the brewing party of even just part of the visiting and tasting party. One-off beers are special for obvious reasons, its like you can only get them at certain times. But what makes it really special is the opportunity to learn something. Maybe it’s about beer, maybe it’s about a brewery you never heard of, maybe it’s all of the above. It really is a team effort. Hopefully you made it, if not, look forward to next year and look forward to trying all the collaborations from your local brewers until then. Maybe next year they should call it Colla-BEER-ation Fest.

Take note that some of the breweries will be offering their brews outside after the event — at the brewery, in bottles, or at local tap-houses but also at Terminal Bar at Denver Union Station all week long. And that’s where you’ll find us, sippin’ on some second chance collabs.

View our photos from this year’s event here. All photography by Candace Peterson