This past year marked a historic moment in the world of whisky. For the first time ever a Japanese Whisky nabbed the coveted title as the best whisky in the world. However, this shouldn’t come as a surprise since Japan has been perfecting this craft for almost 100 years. But because it was only recently made available for export, the demand for Japanese whisky is now rising in popularity in the states. Denver is catching on to the hype, with just a handful of bars offering Japanese whisky around town, but those who do are proud advocates. In this article, we showcase six bars and restaurants where you can sit back and enjoy a glass of smoky, delicious Japanese whisky and and if you’re hungry, feast on some some amazing cuisine, as well. 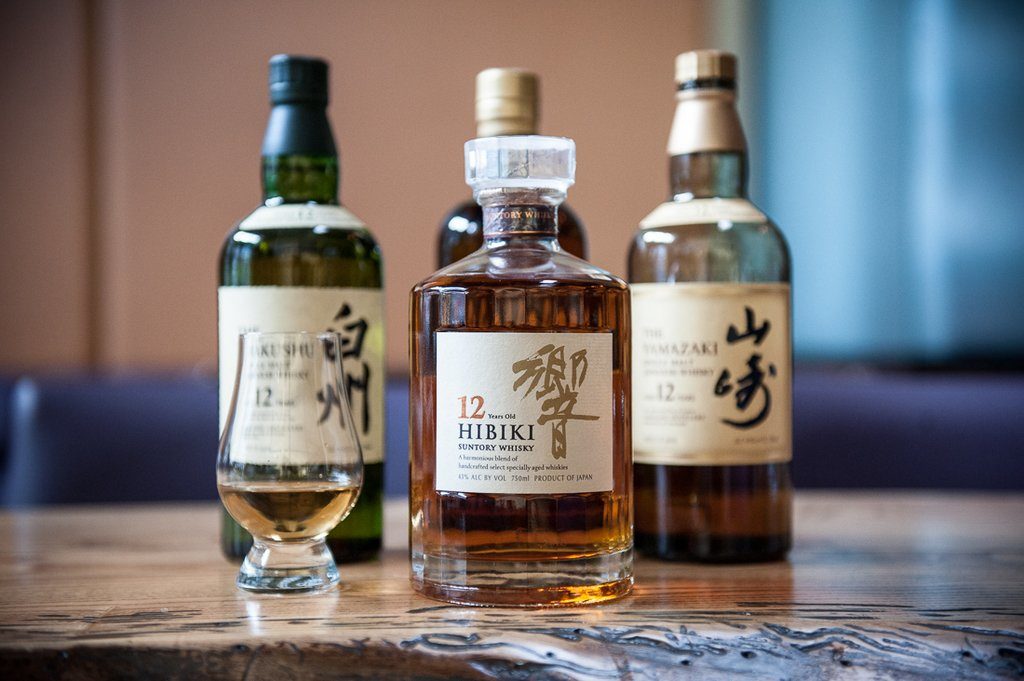 TOKIO is best known for its specialty ramen, and what better to accompany traditional Japanese cuisine than some Hibiki 12 Year on the rocks? Offering both Suntory and Nikka whisky, owner/chef Miki Hashimoto is a huge supporter and fan of Japanese whisky, and was delighted to show off TOKIO’s petite bar on the second level of the restaurant. “With Japanese whisky, you shouldn’t make a cocktail,” explained Chef Hashimoto. “[Japanese whisky] is really mellowed, and we wouldn’t want to ruin the flavor. It’s best on the rocks, or my favorite way to drink it is with soda.” Hashimoto points at that due to the robust flavor of Japanese whisky, if he were to pair it with food, he would stick to something small and oily. Under TOKIO’s small plates, he suggests the Kara Age, which is a Japanese style, tempura fried chicken, or the Kushi Katsu, an appetizer of Berkshire pork, panko, onion, and Japanese worcestershire. 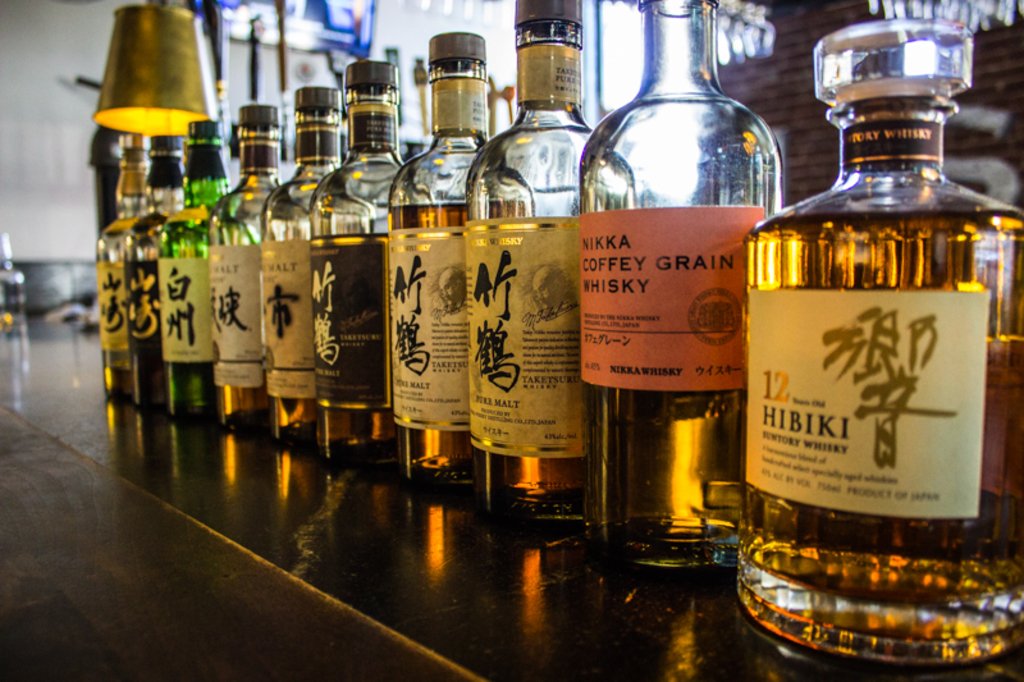 With one of the largest collections of Japanese whisky in town, Argyll Whisky Beer stands out as a supporter in popularizing the spirit in Denver. Offering a comprehensive collection of both Suntory and Nikka made spirits, Argyll’s collection consists of a whopping ten Japanese whisky’s. You can enjoy anything from the smokey Hakushu 12 year to a sweeter Nikka Coffey Grain. Though Argyll does not offer any cocktails using Japanese whisky at this time, upon request, bartender extraordinaire Colin Dart mixed an impeccably made classic Japanese cocktail using Hibiki 12 year, house-made orgeat, and Angostura bitters, garnished with a lemon peel spiral. The result was a smooth, fruity cocktail with smokey undertones. Included in Argyll’s ‘Worldly Single Malts’ flight is Nikka Miyagikyo 12 year Single Malt, which has a smoldering, peaty flavor with undertones of citrus, a stark contrast from the sweet, cognac aged Brenne French Single Malt just above it. Argyll’s food menu reflects a spin on London based gastropub cuisine, offering dishes such as Scotch Egg with fennel apple salad, and Bangers and Mash, with your choice of two out of three flavor options. 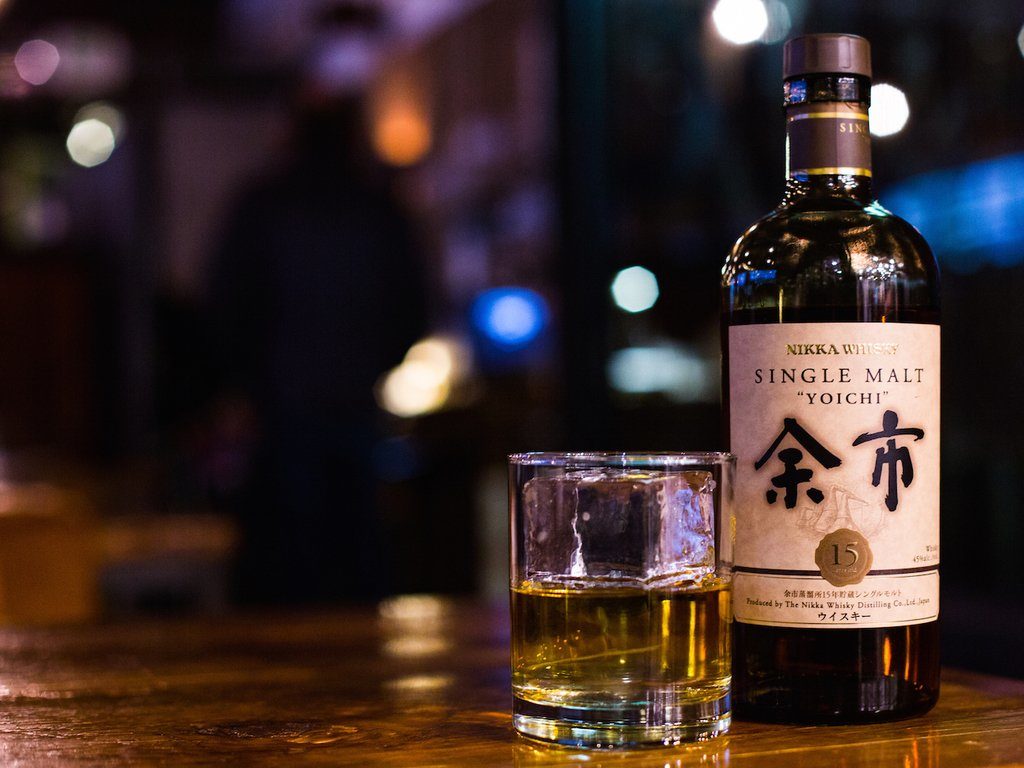 Bustling on a Tuesday night, Old Major is no stranger to the revival of cocktail culture. This LoHi favorite carries an impressive variety of spirits from around the globe. Offering up to six Japanese whisky’s, bar manager Mike McGill discusses why Old Major offers Japanese whisky and how much he loves it. “We push it because it is a good cross between Scotch and Bourbon,” McGill describes as he poured a taste of the Nikka Coffee Grain on the rocks.  “The Nikka Coffee Grain is different because it’s made in a column still, a continuous still, and it makes for a different flavor.” It is true that the Nikka Coffee Grain drinks much more like a bourbon than Scotch, with sweeter, caramel tones versus the peatier Japanese whisky’s. Old Major used to offer a cocktail mixing Nikka 12 Year with Mezcal, OM’s play on a Dark and Stormy, but eventually decided that the spirit was just too precious to spare. Not only  the high price point, but the complexity of the flavor palette, should encourage people to try Japanese whisky alone in order to fully appreciate it. 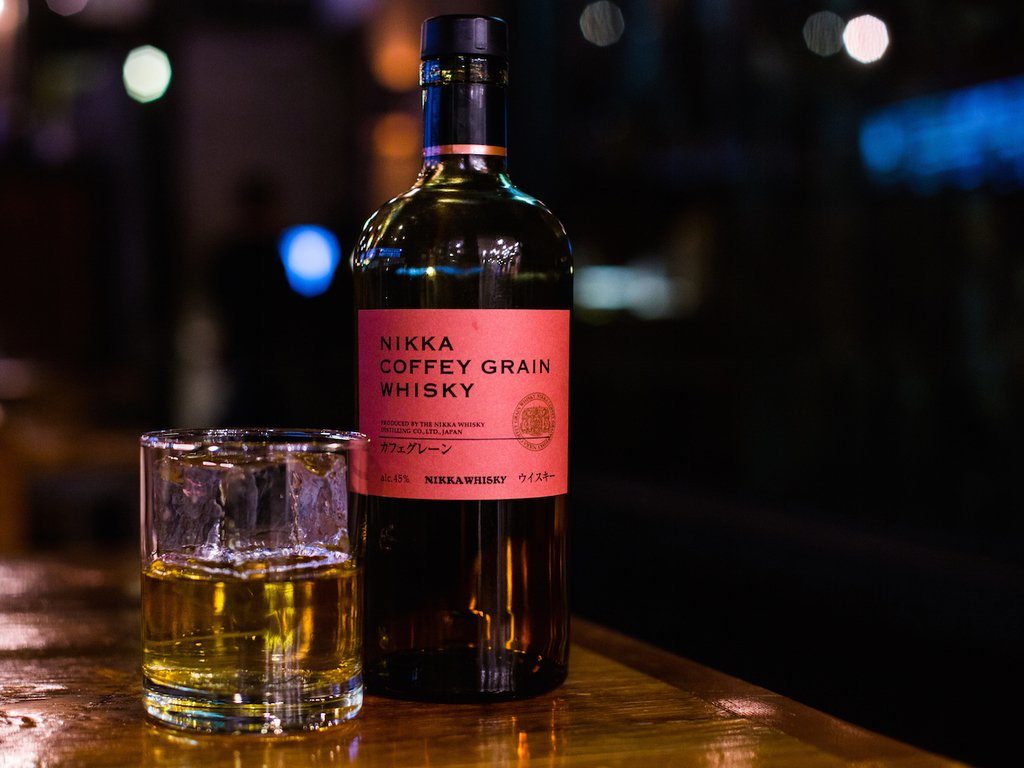 Boasting an extensive collection of Japanese whisky in Denver, Ace carries everything from Hakushu 12 Year Single Malt to Nikka Taketsuru 21 Year Pure Malt. The bar at Ace strives to match its pan-Asian food menu, offering not only Japanese whisky but a large variety of sake, imported Asian Beer, and even a few Tiki cocktails. Recently removed from the cocktail menu but still available is the Salaryman, a cocktail made up of Hakushu 12 year, sweet and dry vermouth, and Aperol. If you are looking to enjoy a fresh snack with your Salaryman, pair it with one of Ace’s brand new raw fish options such as the Hamachi Sashimi, with thinly sliced Baja hamachi, white soy, and jalapeno.

Editorial disclaimer: Author of this article is a server at Ace. Eat. Serve. However the inclusion of Ace.Eat.Serve, among others, were based off references from independent industry professionals. 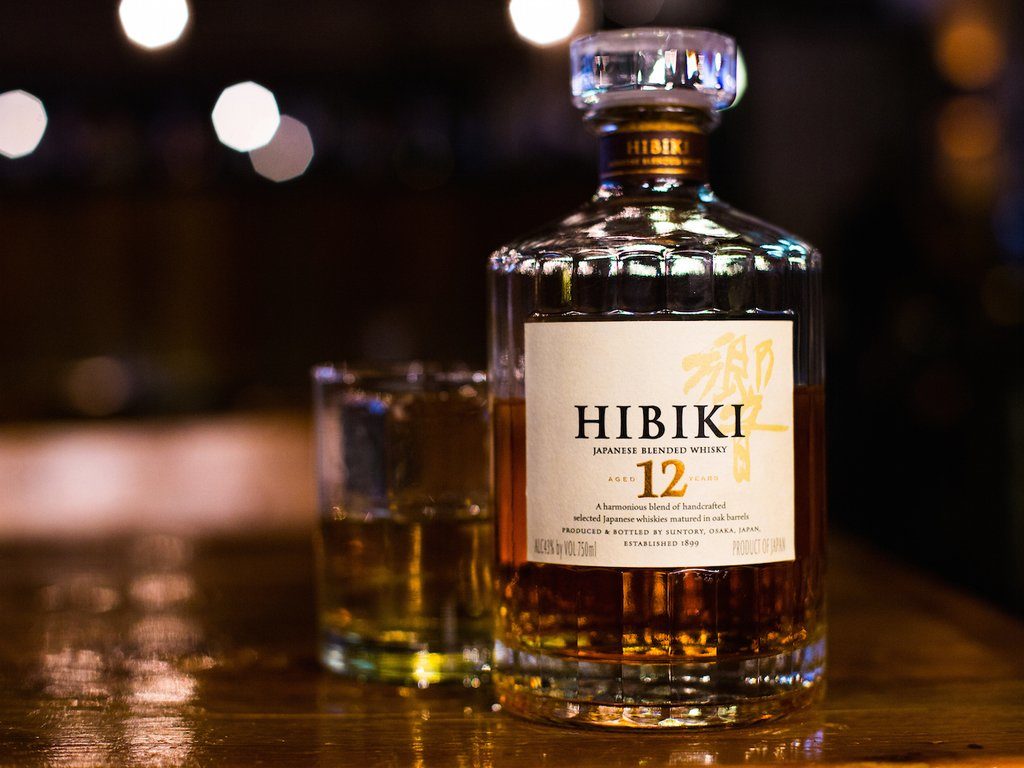 Recently ranked among the world’s 50 best bars, Williams and Graham in the Highlands packs an intimidating array of fine spirits and is home to Bartender of the Year and co-owner, Sean Kenyon. The selection of whisk[e]y at Williams and Graham is almost baffling with a widely diverse list including a handful of Japanese options. This dark, sexy speakeasy does almost everything true to its 1920s theme down to hand carved ice blocks, which are also sold to several local bars as achieving the perfect rock can be time consuming and dangerous. As for a Japanese whisky cocktail, Williams and Graham does not offer one at this time. 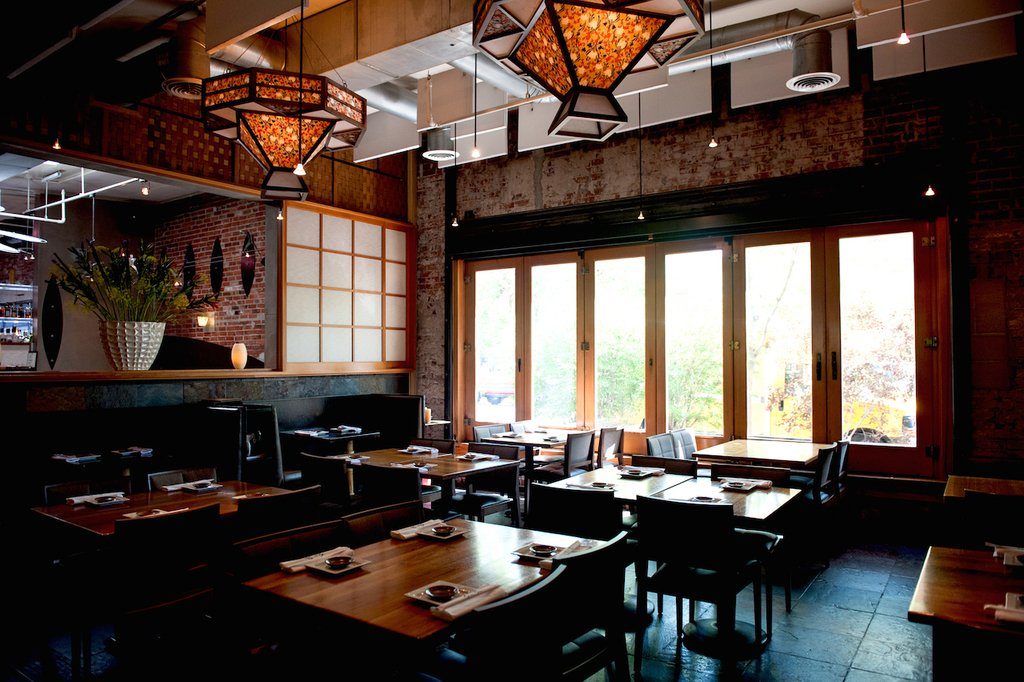 It is only fitting that Sushi Den, one of Denver’s most popular and respected sushi joints, offers a variety of Japanese spirits including a hand crafted cocktail using Japanese whisky. The Samurai Victory consists of Hibiki 12 Year, Campari, and sweet vermouth, Sushi Den’s Japanese twist on a Boulevardier, which is basically a whisky Negroni. This cocktail packs a punch, using a hefty pour of whisky in replacement of gin, for a unique and more alcoholic spin on a Negroni. This smoky and herbaceous cocktail can be enjoyed with a plethora of traditional Japanese dishes offered at Sushi Den. A glass of Hakushu 12 Year compliments the rich and succulent Sweet Korean short ribs perfectly, or if sushi is what you’re craving, try their Rocky Mountain Roll, pairing smoked trout with the smokiness of Japanese whisky.