Fall is the new summer… for music festivals. Sure, there is the usual onslaught of spring festivals and Memorial Weekend festivals and those that run through blazing July and steamy August, taking place in the dusty Midwest or the sweltering South.

But once the kids are back in school, the quality festivals roll around and it’s adult swim time in festi-land. Phases of the Moon in Illinois just ended, with our very own String Cheese boys bringing out the big guns, as usual. Suwannee Hulaween in Florida is at the end of this month and has a killer lineup, guaranteed to weird out the crowd with acts like Shpongle, Beats Antique, and The New Deal. Then all the “south of the border” holiday festivals (including the great granddaddy of them all: Jam Cruise) will be here before we know it. 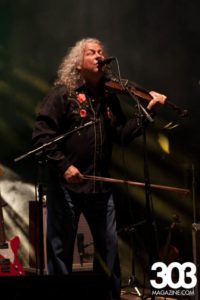 This year’s Hangtown Halloween Ball features three days of Railroad Earth, plus bands such as The Meter Men, moe., Leftover Salmon, the Jeff Austin Band, ALO, the Shook Twins, and a few of our homegrown favorites: the Motet and Mountain Standard Time. Any many, many more- plus all-star collaborations, intimate late night shows, and extra early-bird music if you arrive on Thursday.

You can purchase a single day pass, 2-day pass, or full 3-day pass for $70, $125, or $165 (plus fees) respectively. Don’t forget to buy your additional late night, early entry, camping, and car passes in advance, too. VIP and kids tickets are also available. The daily music line up schedule (as well as the daily costume themes!) for the Hangtown Halloween Ball were just recently released and can be viewed at hangtownhalloween.com.

303 Magazine got a chance to catch up with Railroad Earth’s bassist Andrew Altman to ask him a few questions about the upcoming Hangtown Ball and to give us just a few good reasons (like we need an excuse) to skip town and migrate westward for this event. Pack your costumes, kiddos, because this Halloween festival is sure to be well worth the trip.

303: Halloween is just around the corner and that means it’s time for Railroad Earth’s annual Hangtown Halloween Ball. What makes this festival so special and sets it apart from the rest? What can we expect from this year’s Hangtown Ball?

Altman: Well, for us- since it’s a Halloween thing- the whole event is a theme. It’s unavoidable. We have to play along in some way, with a costume or a song or something, you know. There are so many other festivals out there and some of them, just by the nature of their line up or location, turn into a certain kind of thing, with people dressing up or being crazy. But with this, there’s just no getting around it, which is fun!

There’s a reason for the craziness. It’s not just summertime, in a field or whatever. 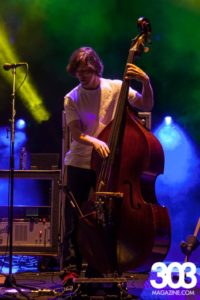 303: Do you have any exceptional costumes planned for this year’s Halloween? Do you guys coordinate your costumes in advance? Do you prefer silly or spooky costumes?

Altman: Yeah, yeah we’ll put on some things. Our lighting designer, Alex, puts on a lot of this stuff. It’s his forte. I just try to put on a good attitude (laughs). “Sure, whatever you’ve got.” It’s fun, it’s the kind of stuff I wouldn’t get into otherwise. But everyone’s going for it. So he brings stuff, we put it on. We’ve been talking about it (costumes) now, but I’ve got so many other things to focus on. I try not to over think it. Alex also puts together the theme. Last year we were a dead mariachi band. Sometimes it’s kind of random.

303: Wait, so there’s a job that is basically costuming bands and creating festival themes? I think I could excel at this. How do I apply?

Altman: Well, he started as promoting our shows and then got into “theme enhancement,” which is when we met him. Then he got into doing our lights and creating the ambience.

303: What’s your opinion on the fall festivals versus the summer festival? Do you find it has a different feel or a different crowd?

Altman: A lot of the ones we play in the fall just tend to be smaller. I think that’s because Bonnaroo or Wakarusa or Lollapalooza or Coachella or the really big ones, they take place when everyone’s free. People get more into their routine this time of year. To me, that’s the biggest difference: they’re smaller. More intimate. They’re not as crazy, where you have to park a half hour walk away from the stage. And, personally, I don’t see the appeal of camping in a field in the middle of summer and staying up all night and trying to sleep during the day in the blazing sun. Granted, none of us camp (laughs). But even just playing, it’s better (in the fall). It can get really cold- but I think with the camping, it’s better to have that chill in the air.

It’s getting crazy, the festival thing. The festival season used to be a few months and now it’s getting to be year round, which is great in some ways. It’s tricky in others.

You’re pretty limited to three months when you can actually just go “on tour” in the winter without a bunch of other stuff competing with it. It’s harder to tour in the summer with all the festivals. People go so out of the way and pay hundreds of dollars to go to these festivals, but how many of them are coming to just see your band? 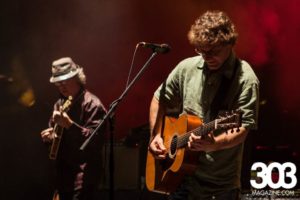 303: Then Railroad Earth is off to Mexico in early December for the Strings and Sol festival, which has quite an impressive bluegrass lineup (Greensky Bluegrass, Leftover Salmon, Yonder Mountain, The Infamous Stringdusters, Travelin’ McCourys). What’re you looking forward to most about that?

Altman: We’ve done every one of them, I think it’s their third or fourth year. The weather in Mexico is the biggest thing: it’s a treat. And it’s small. It’s put on by Cloud 9, who does Jam Cruise, etc. So the people who go are those kind of people. Those people really want to be there, because it’s expensive. It’s not like the really big festivals where people are there because they might want to see you, but they really want to party. You’ve got to really be into the music to be down there.

303: Railroad Earth will be back in Colorado again in January for their highly anticipated 3-night run at the Ogden, which is almost like a mini festival in itself. Is there anything particular Railroad Earth enjoys about playing in Colorado, whether it’s at Red Rocks in the summertime or the Ogden in the dead of winter?

Altman: Well, we spend a lot of time thinking about that.

What do we like about Denver? That’s easy: we get the biggest support. There are just so many people there who come out, so there’s a lot to like there.

But when it comes to choosing the venue, we put a lot of thought into that. We did the Fillmore last year, which was successful for us. And Red Rocks- it’s like every time we play- it’s always getting bigger. But we want to keep that momentum up. Some people like the Fillmore, some people don’t. But coming off the sold out Red Rocks show, maybe this is a little more exclusive this time. Going back to the Ogden is a bit about trying to capture that show for the fans. And our AEG promotor has done a lot for us and playing at the Ogden is his venue, so it’s mututally supportive. It’s not taking a step backward, it’s just a way to do it a little different. And it’s for the fans- it’s like a fun, mini-festival- and also doing something for someone who’s done a lot for us.