What: Glaze by Sasa

Pros: Glaze and Sushi Sasa have teamed up to offer a dining experience unparalleled in terms of uniqueness. Sushi Sasa dishes up some seriously distinctive, mouthwateringly good sushi with unexpected ingredients like strawberries and goat cheese. And the desserts from Glaze are an adventure all their own—you won’t find authentic Japanese Baum cakes like this anywhere else in the States. My suggestion? Take a seat at the sushi bar and let the talented chefs guide you on a culinary journey. Prepare to be awed by the precise plating and techniques.

Cons: As of last week, the liquor license was still pending. That being said, it should come through any day now.

While being a food pioneer is commendable, it’s certainly not always easy. Heather Alcott learned this lesson the hard way, after opening and closing Glaze, her shop specializing in unique Japanese baumkuchen cakes. Luckily, this story has a happy ending, as Glaze reopened in June at the same location, this time partnering with Sushi Sasa to offer a more rounded dining experience. 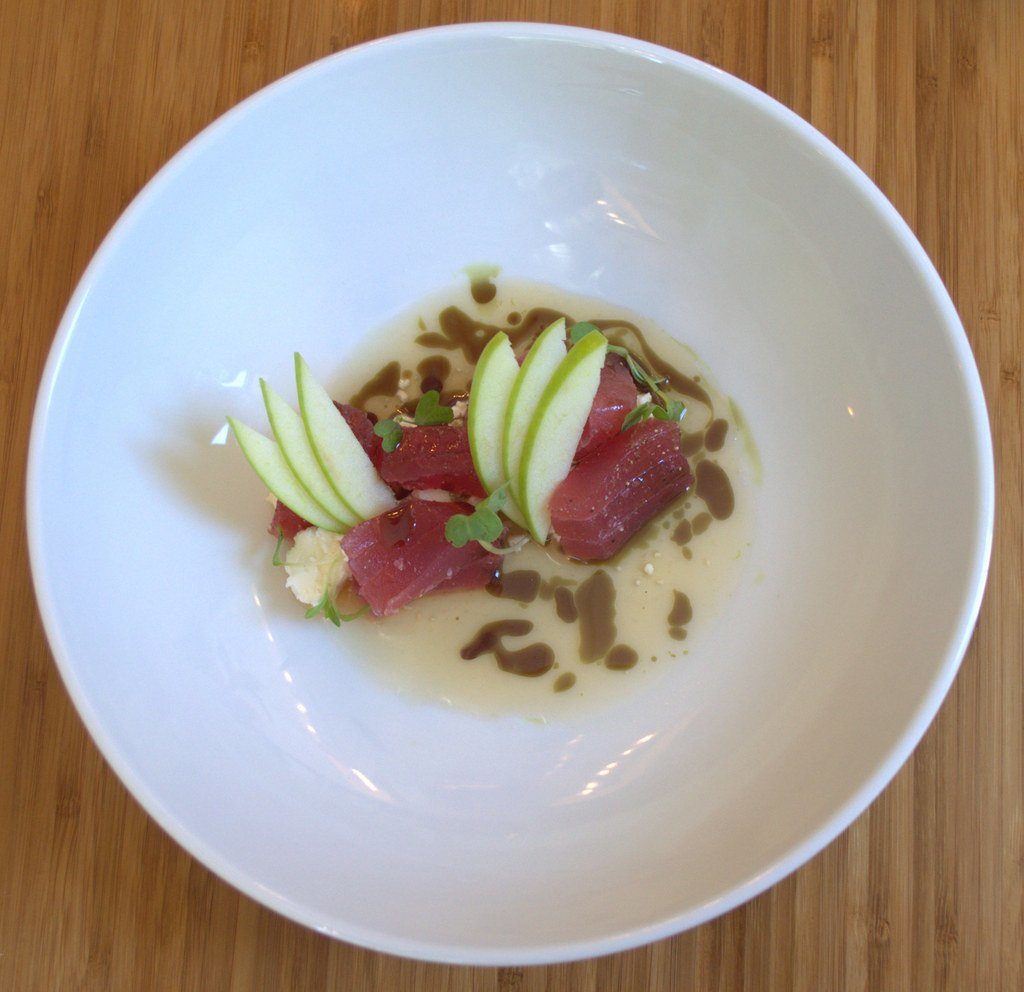 Many Denverites, including 303 Magazine, fell in love with baumkuchen, or baum cakes, at the original Glaze, which we covered here. Alcott was the first and only person in the United States to import the gigantic, authentic Japanese baum cake oven, which she calls the “red dragon”. There was definitely a process not only of learning how to use the imposing oven, which required weeks of training and certification, but also teaching customers about the unique product it yields: the Baum cake. The baum cake is baked in the special oven on spits, rotisserie style. Each layer of cake is painted on by hand, one by one, giving it an irreplaceable beauty and lightness of texture.

Alcott has loved baum cakes since the first time she sampled one at a bakery in Tokyo, and bringing these cakes to Denver was her calling. Though Glaze was earning both local and national attention for the unique sweet, Alcott closed the shop down. While she was clearly bringing something one-of-a-kind and elevating the Denver pastry scene to new levels, she wanted to take stock of her business and realize what was and wasn’t working.

What she really wanted was a way to give people more of an experience with the desserts, rather than just wrapping them up to take home. Enter the partnership with Sushi Sasa, which opened officially on June 16th.

Partnering with Sushi Sasa ended up being a natural progression—the precise and artistic creations of chef/owner Wayne Conwell (who has worked with Iron Chef Masaharu Morimoto) perfectly complemented Glaze’s whimsical Japanese desserts. Now that there is savory side to the business, guets can cap off a great meal with a stunning, plated rendition of their favorite baum cake.

While Sushi Sasa’s menu includes plenty of rolls, noodle bowls, and otsumami, my advice is to go with whatever executive sushi chef Allon Moreno is creating. Grab a seat at the sushi bar and you’ll be rewarded with one adventurous plate after another. Take the plate we started with an a recent visit— an assertive mix of tuna, goat cheese, apple, a vinaigrette of rice vinegar, dashi, soy, and sugar, and a final drizzle of pumpkin seed oil. While cheese, especially goat cheese, is not something commonly used in sushi, Moreno’s dish was balanced, fresh, and addictive. The creamy tang of the goat cheese brought out the rich silkiness of the tuna, leaving you wanting more. The sushi at Sasa shines with unexpected ingredients, used sparingly, to create minimalistic yet innovative dishes.

We also sampled a dish featuring raw scallop, a strawberry and heirloom tomato pico de gallo, micro radish, lemon zest, and olive oil. While the combination sounds strange, the dish balances in the mouth in an unexpected way. “This is usually the last dish I serve before people move on to dessert, the sweetness from the strawberries kind of brings you there,” Moreno explained.

Leaving without dessert at here would be a crime. After seeing the “Red Dragon” oven, prominently displayed in a glass-framed room, curiosity at least should prompt you to try one of the baum cakes. 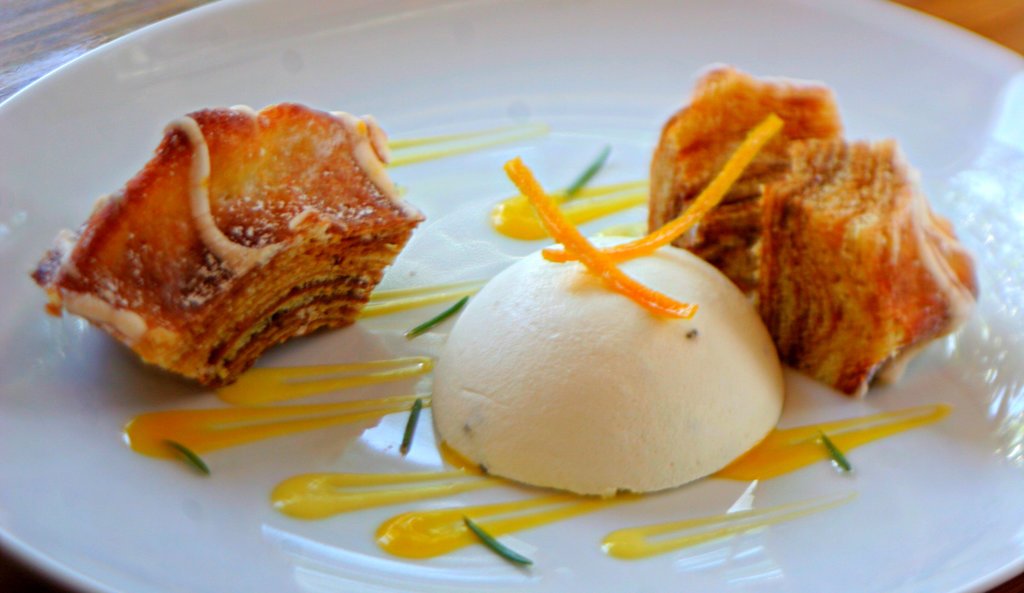 Pastry Chef Amanda Mueller (who has been with Glaze since the beginning) and her team bake two distinct types of baum cakes daily. There is the original baum, a more traditional Japanese style, which is soft, tender, and moist, with smoothed edges. Then there is the mount baum, which we described on our first visit to Glaze as having a drier, chewier texture than the original baum. The outside has spiked ridges, a decision that deviates from tradition—“Japanese pastry chefs use a tool to make the outside perfectly smooth. But I wanted to put an original Colorado spin on the cake, so we leave it ridged like the Rocky Mountains.” Alcott explains that “Glaze is almost like a test kitchen,” with flavors ranging from chocolate to orange-fennel. While Glaze is using many traditional Japanese techniques and ingredients, Mueller also plays with flavors and plating.

One dish that exemplifies this approach is the beautifully composed citrus mount baum cake. The ridged cake is cut into wedges and plated with an ethereally light rosemary-honey cheesecake, candied orange peel, salted roasted-orange gel, and delicately placed rosemary leaves. The hearty texture and crunch of the cake was perfectly foiled with the almost mousse-like cheesecake. 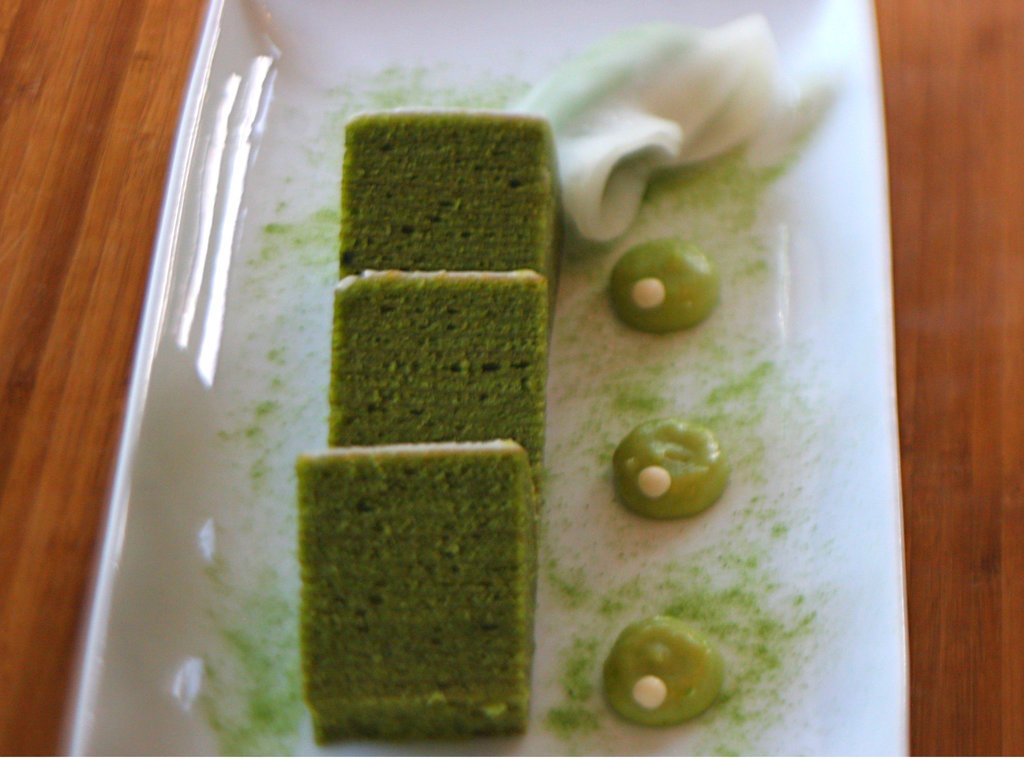 My favorite had to be the original matcha green tea baum cake. If there was ever a dessert for matcha lovers, this is it. The imported matcha powder infuses the ultra-moist, bright green cake with its slightly bitter, earthy flavor, brightened with a lemoncello glaze. Accompanying the cake is a homemade mochi dumpling filled with rich green tea ice cream, and dabs of white chocolate-matcha sauce. This dessert perfectly showcased matcha tea, often a challenging ingredient to bake with, in an array of preparations.

No time to sit and enjoy dessert? Luckily Glaze still has a bakery-style walk-up counter where you can take all of the gorgeous baum cakes home. The case is also loaded with jewel-toned pate de fruits, and pastel-hued macarons in flavors like prickly pear and basil berry. My favorite had to be the luscious chocolate-covered sesame caramels.

Pastry Chef Mueller has been enjoying the partnership with Sushi Sasa. The Sasa and Glaze teams have been working spectacularly together, Moreno and Mueller bouncing ideas off of one another to ensure that the experience as a whole is well rounded. Mueller has been taking the already magnificent Baum cakes to new heights in her plated desserts.

While the partnership between Glaze and Sasa is still relatively new (as of my last visit, they were still waiting on their liquor license), they are already offering a truly unique and unparalleled global experience with the array of unique ingredients and preparations they bring to the table. They duo is already working in harmony to provide a seamless, adventurous dining experience that you simply won’t find anywhere else. Stay tuned for cocktail menus and brunch, both of which are in the works.