Spring ends and summer begins, kicking off a busy and already unprecedented street-art season. We are celebrating the best Denver street-art that has been created so far this year. In the lovely yet mildly unpredictable weather of Spring, local artists began making beautiful new murals and waves in the Denver art scene. Here are my 10 favorite street-art masterpieces made in Denver so far this year.

Reverberations by Soule and Lovato. Photography by Lindsey Bartlett.

This breathtaking new mural by Damon Soule and Justin Lovato will be found in RiNo, on the East side of the street in between 25th and 26th on Larimer. The piece echoes Picasso in it’s psychedelic, surreal, mountainesque scene. The painting is entitled “Reverberations.” The two even made this stunning time lapse video to show the progress of the mural. Follow Damon and Justin on Instagram to see more work from the ridiculously talented young artists. 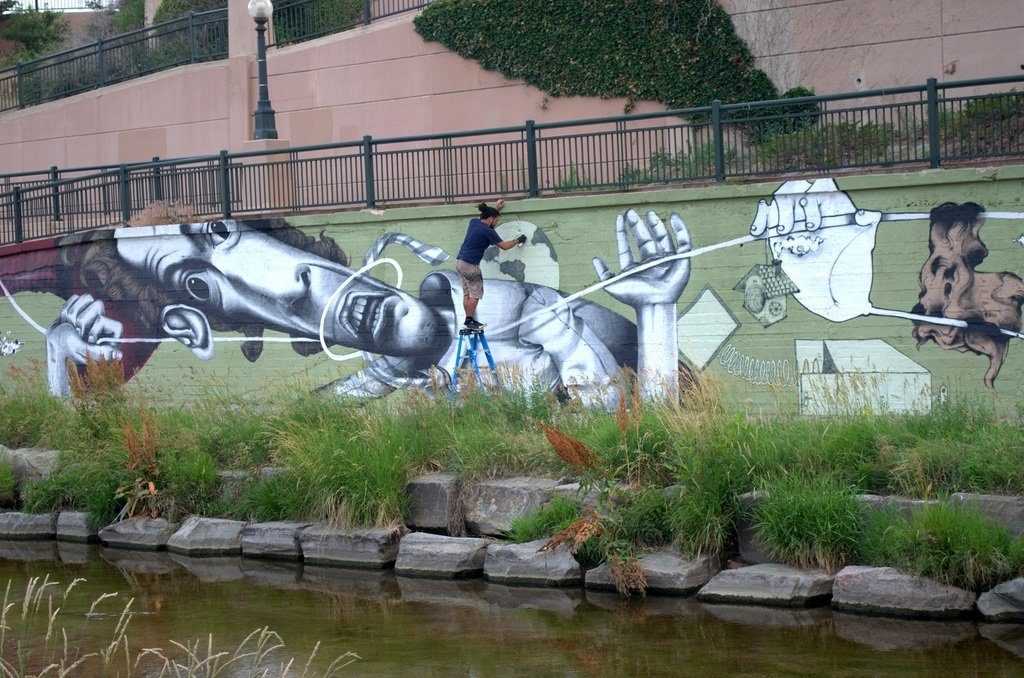 Claudio Ethos at work on the Cherry Creek Bike Path.

Claudio Ethos and Alex Hornest are some of the best international artists to ever grace Denver with their work. They have created three pieces total, one stunning mural along the Cherry Creek Bike Path, as well as another banger hidden on the rooftop of Meadowlark in River North, and the third is along the South Platte Bike Trail on Broadway and 6th. Follow Ethos and Onesto on Instragam, and look for the amazing murals in person!

Jaime Molina and Pedro Barrios, collaboratively with Joseph Martinez known as the artist trio “Palabra,” have truly outdone themselves with this latest mural. The Denver Urban Arts Fund, also called the UAF, invited Molina and Barrios to create a piece of art for the Cherry Creek bike path. Molina is a regular on Concrete Canvas and has only received more highly deserved critical acclaim as of late in the art world. Read more about the newest Denver art walk and learn about the deeper meaning of the piece, overcoming fears.

Hari and Deepti with Birdseed Collective 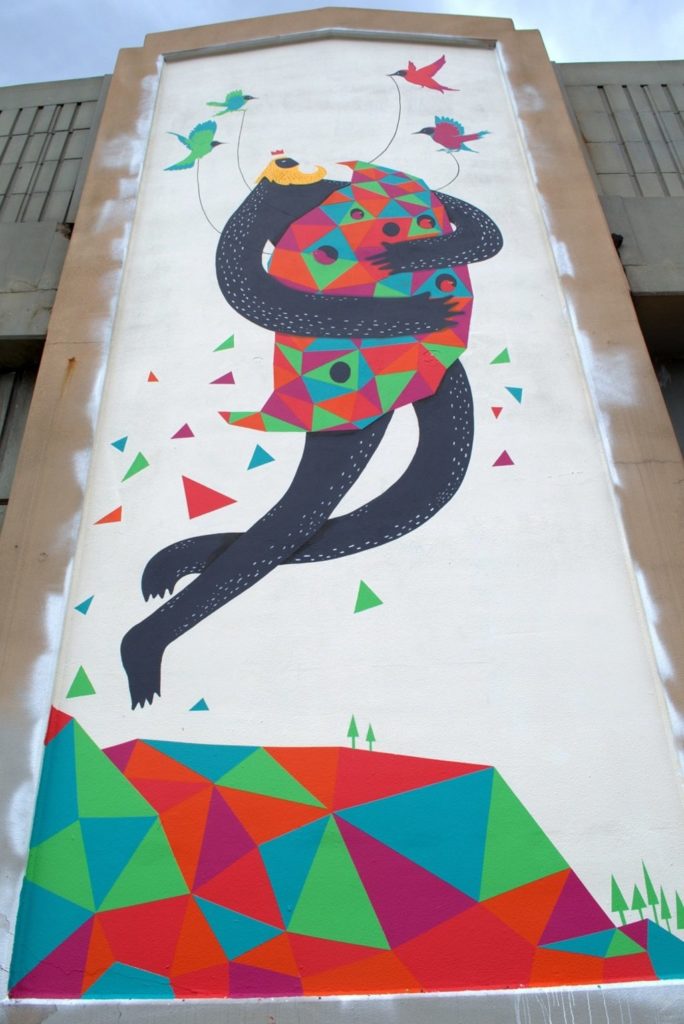 Hari and Deepti with Birdseed Collective in Globeville.

Birdseed Collective is a staple in Globeville. Birdseed is a dynamic group of artists, creators and innovators that are bringing Denver youth and local artist’s work to a whole new level. Anthony Garcia is one of these artists, and he organized a stunning new UAF mural through Denver Public Arts that was brought to life from the creative minds of Deepti Nair and Hari Panicker. This is C-Dot property, next to a mural done last year, and this spot is a huge accomplishment to get sanctioned. Collaboratively, the duo are responsible for some of the most imaginative works of art in the city. Follow Hari and Deepti on Instagram and cruise by the new UAF mural on Lincoln and 46th, on the C-Dot property underneath the highway, in Globeville. 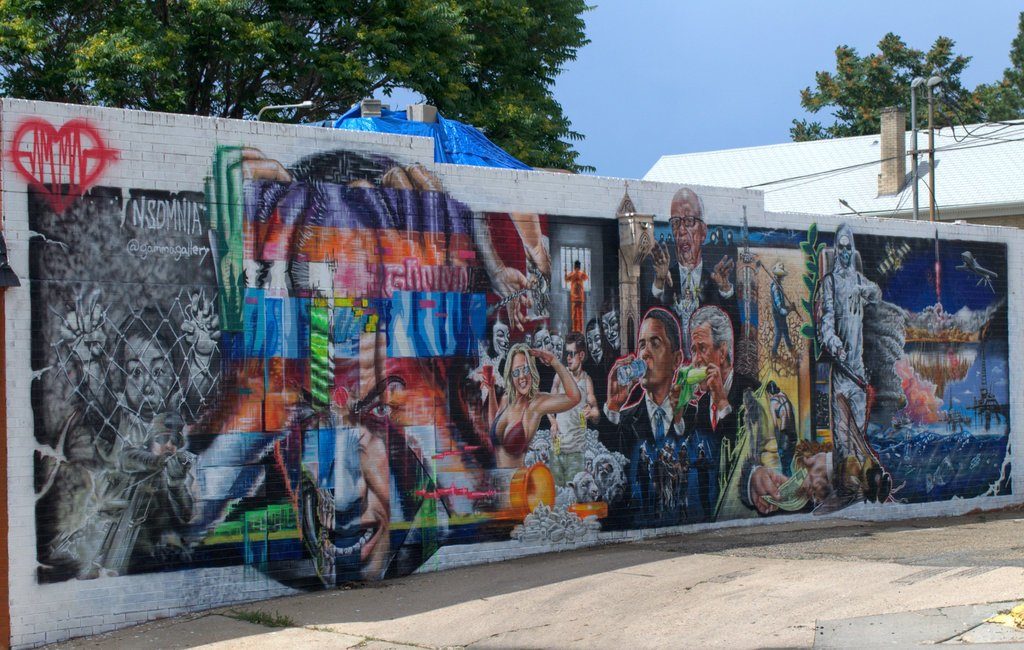 Insomnia is chaotic, yet brilliant. Gamma Acosta layered the piece over several weeks, and even created a time-lapse of it’s evolution. The boldness and the honesty of this mural is truly the best part. Gamma explained that the mural is open to interpretation- it is not political, it is not biased, it just represents one point of view. In my mind, that point of view is of a relevant and harsh reality we live in today. Stop by Bella Vista Mexican Restaurant on 20th and Sherman to decide for yourself what the mural means. But hurry, “Insomnia” will only be up for a few weeks before it is then painted over! 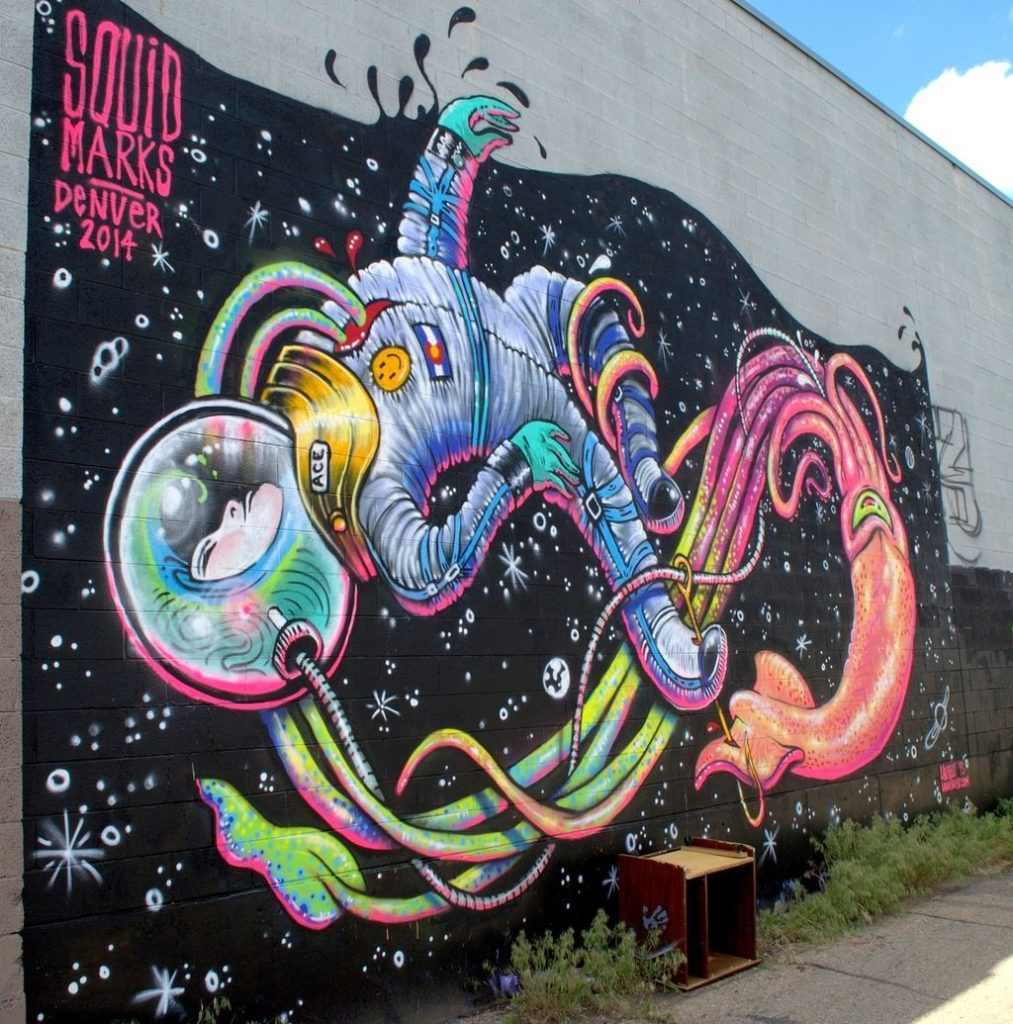 Lauren YS Illustration was born in Denver and now works out of San Francisco. She is another wildly talented artist who made a mark in Denver this season. This cool squid juxtaposed with an astronaut infinite sign is a miraculous visceral addition to the alleyway in between Larimer and Walnut Street in River North. Over a month ago, Lareun YS came home to Denver and, with help from local artists Joseph Martinez and Jonathan Lamb, found this beautiful wall to sign. See the piece for yourself in the River North/Larimer Art District, and follow Lauren on Facebook for more of her imaginative, sea creature-meets-existential artwork.

Chris Dyer’s work channels raw energy onto canvas. In this case, a concrete canvas. Dyer’s highly acclaimed Positive Creations always contain a message- he truly creates artistic, street-art images that represent different deities, that expand your perception of reality, and that push the boundaries of sanctioned mural art. Follow Chris Dyer’s amazing adventures on Facebook and be sure to check out the highly colorful, visceral, poppin’-off piece for yourself on the side of Knew Conscious art gallery.

Jonathan Lamb and Michael Ortiz are the brilliant local artists who make up Like Minded Productions. With an office just down the street, Lamb and Ortiz are plastered all over RiNo and have helped curate and find walls for some of the other artists who come through Denver. Truly, the city would not be as beautiful without Like Minded. One love for all the hard work these artists do for the city.

Don’t Fret Art is hilarious, kitschy, and astounding. This amazing Chicago based artist graced River North (a common theme in this years best, fresh urban contemporary art pieces) on a huge South facing wall at the intersection of 27th and Larimer Street. Follow Don’t Fret Art on Instagram and keep with the this amazing artists surreal, bizarre, caricatured yet oddly human work.