Jessie and her Wild Wig

Denver Pridefest has come and gone but the street style 303 Magazine saw at the event should keep the city glittering till next year. There was lots of color, costumes and oh, so much skin. It seemed like some event goers really took our Denver Pride Guide to heart. The event kicked off on Saturday the 21st and took place in Denver’s Civic Center Park.

Booths among booths provided event goers with plenty of entertainment, food and free gear. Multiple stages allowed for drag appearances by BenDeLaCreme, power ballad’s from Frenchie Davis, and even a dog drag show contest. Sunday, the 22nd started off with the CoorsLight Pride parade showcasing Denver’s GLBT community. It was quite a sight to see with drag queens on stilts, show girls in Vegas headdresses, and so much more.

The event started off with sunny skies followed by rain, and everything else in between – but that didn’t stop event goers from dressing to the nines. Drag queens were in full force with detailed dresses, makeup and wigs larger than last year. It seems like event goers took inspiration from those elaborate hair dos, because we noticed a trend of wigs during our time at Denver Pride. We saw them in all different lengths and colors but we were super impressed with the volume Colorado native, Jessie, had on her head. She opted for a large white afro that helped her stand out in the crowd. It contrasted well with the pink shades and definitely gave us that ’70s feel. 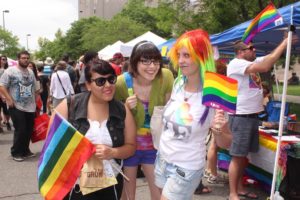 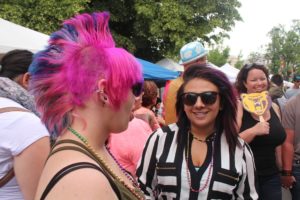 Amanda, a Colorado native, brought along some of her girlfriends to enjoy the event. This group opted to keep it cool with revealing crop tops in fun colors. “It’s my first time here and I didn’t want to worry about the heat,” she said. “I thought showing some skin would be ok.”

Amanda and her friends weren’t  the only ones with that notion in mind. Men and women both paraded around in speedos and underwear. Whether it was a rainbow G-string or booty shorts, we definitely saw our fair share of skin…but hey, we’re not complaining.

Amanda (second on the left) with her friends

Boys in Shorts during the Sunday Parade

If there was one thing we noticed at pride, it was color meets costume. Event goers dressed up in a variety of ways showing off fairy wings, leather bondage, and feathered headdresses. Jerremie, who has been attending pride for years now, came with his friend, Jacob. The two were ready to rock in their anything-but-shy outfits. Jerremie wore a rainbow pleated skirt alongside a black mesh top, a Madonna inspired bralette, and a pink triangle shield. Jacob took punk to new heights, mixing luscious lashes with a plaid skirt and matching stockings.

It’s easy to see that Denver Pride 2014 was a great success, and it’s all thanks to Denver’s fashionable citizens. You can learn more about the event and about Denver’s LGBT from The Center. Check out all our photos from Denver Pride here.

Jacob and Jerremie in colorful ensembles