Game of Thrones came to Denver in a whirlwind of excitement this past Thursday March 27th with HBO’s exclusive premiere at the Paramount Theater. The event boasted a real life Iron Throne, costume contest, realm worthy music, beer, and of course, the highly anticipated first episode of Game of Thrones Season 4. The HBO show and acclaimed book series by George RR Martin do not simply have a Colorado fan base, but a loyal, die hard, and passionately nerdy cult following.

David Castro, the West Coast HBO marketing representative, spoke to 303 Magazine before the premiere. Castro told us why Colorado made the exclusive Game of Thrones premiere tour list.

303 Magazine: So tell me, is this is the real Iron Throne?

David Castro: Yes, one of them, they’re on tour, but we only have several of them. There are only a handful of cities we take them to for this type of premiere.

DC: Denver is a great market for us. We like to promote all our original programming and make it locally relevant. We thought, how great to engage with the fan base here. Geo tracking on Facebook, we’ve got a lot of great fans as you can see from the crowd outside. And then just in terms of viewership, Denver ranks 35 in the top 50. Not everybody gets the big, red carpet, New York premiere, but we select only a few cities for the Iron Throne and the premiere event like this. This is a great second offering. 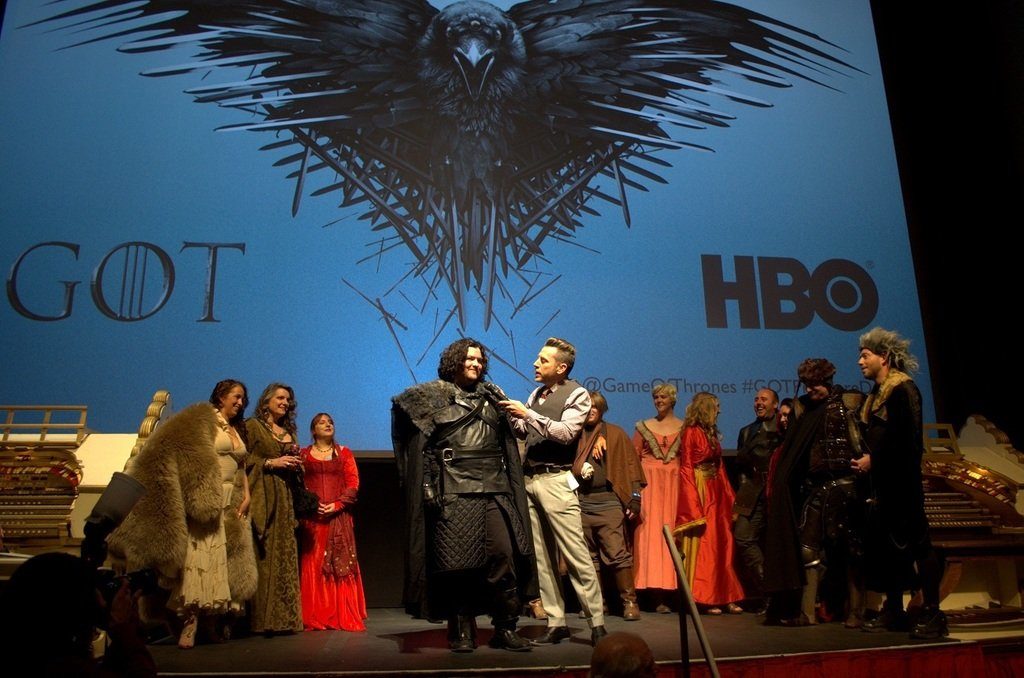 Denver is a stop worth hitting on the map, in HBO’s David Castro’s eyes. For good reason. The crowd was rowdy, Game of Thrones red ale was flowing, and ye old british accents plentiful. All the awesome particpants of the costume contest were brought to the stage by 303 Magazine’s friend and host Chris Parente of FOX’s Everyday Show. The lucky contest winner was wearing a truly badass John Snow costume complete with floor length nights-watch fur cape and infamous, heart-throb, John Snow hair. Plenty more costume participants walked away with Game of Thrones swag thanks to HBO, including runner up Brianne of Tarth.

The Paramount invited guests to take pictures with the Iron Throne. Beer in hand, we watched the exclusive interviews with the cast at the New York premiere as the crowd filed in. When the lights dimmed and the first episode of the season commenced, the room was electric. Season 4 had finally arrived. Anticipation in the crowd peaked as the famous Game of Thrones music began. Que the violins.

The opening sequence came as a chilling reminder of the dismal end of Season 3, and of the wedding that left the Stark family in ruins. Lord Tywain Lannister (Charles Dance) with his cold and morose presence led a firey, emotional opening sequence. You could practically feel the heat coming off the screen. It set the stage for what will be the most explosive season yet.

As what is truly a continuation of the third novel in the Fire and Ice book series, Seasons 3 and 4 had to encompass all that happened in the third book, A Storm of Swords. Viewers should know there is still a wedding to look forward to, one that will leave a sweeter aftertaste in your mouth than the last.

We were introduced to the Red Viper of Dorne, the menacing Prince Oberyn Nymeros Martell played perfectly and twistedly by Spanish actor Pedro Pascal. The one good Lannister and my favorite character of them all,  Tyrion Lannister (Peter Dinklage) becomes quickly weary of the Prince as a guest. Tyrion also deals with his own drama as his marriage to Sansa Stark has been less than matrimonial.

If you have never watched the series GOT before, start watching right now simply for Peter Dinklage’s role. It is the best of his lifetime, earning him the Emmy for Outstanding Supporting Actor in a Drama in 2011, then a Golden Globe in 2013 for Best Supporting Actor. The complexities of his character are mounting. There is never a better time to join in on the phenomenon.

Jamie Lannister (Nikolaj Coster-Waldau) gets fitted for a gold hand and is given a freshly-forged Valerian sword from his father. I have seen such a beautiful and well written shift in character from the shows beginnings as with Jamie. True to the George RR Martin novel, Jamie is a different person after all that he went through as a prisoner. His new found humility and conscious doesn’t sit well with Cercei (Lena Headey). Cercei is immediately cold to Jamie as he points out her increase in alcohol consumption. The siblings have gone in opposite directions. Drifting apart would be an understatement.

There are some fresh faces (replacing even old actors with new ones) that left me a bit confused. Ultimate babe warrior and Daenerys newly found warrior/love interest Daario Naharis was introduced to the audience as Ed Skrein for the final three episode of season 3. Now, in season 4, he has been replaced by actor Michael Huisman. Equally hot, yet he doesn’t look anything like the original Daario Naharis. Ed Skrein was allegedly unable to continue his role because of an offer to play Jason Stathams lead action role in the next franchise of The Transporter. A role you can’t blame him for taking, yet we will miss his long blonde locks.

Other new actors will be Dean Charles-Chapman as Joffrey’s little blonde brother Tommen Lannister, Ellaria Sand played by Indira Varma as the sexy temptress by the side of Prince Martell from Dorne. Plus, down the road, the wild and somewhat creepy Child of the Forest, Leaf, played by Octavia Alexandru.

The episode ends with Arya and the Hound kicking ass and taking names. Arya has cheated death and just barely avoided a gruesome end at every stop along her path. All the remaining Starks are miracles and I, along with the rowdy crowd at this premiere at the Paramount, are rooting for them.

Watch the season 4 premiere of Game of Thrones only on HBO this Sunday April 6th.