Pro: Lower48 offers modern upscale cuisine for a moderate price. The menu is one of the more dynamic and interesting offerings in Denver. With Executive Chef Alexander Figura at the helm, L48 is one of the best new restaurants to check out in Denver.

Con: Some of the starter bites (pro-only $2 each) were uninteresting whereas others were fantastic. Choose wisely and try out the more adventurous options like the Dried Celery Root in lieu of the more basic items like the Corn Dog and the Potato Cake. Apply this logic to the whole menu and your mouth will thank you. 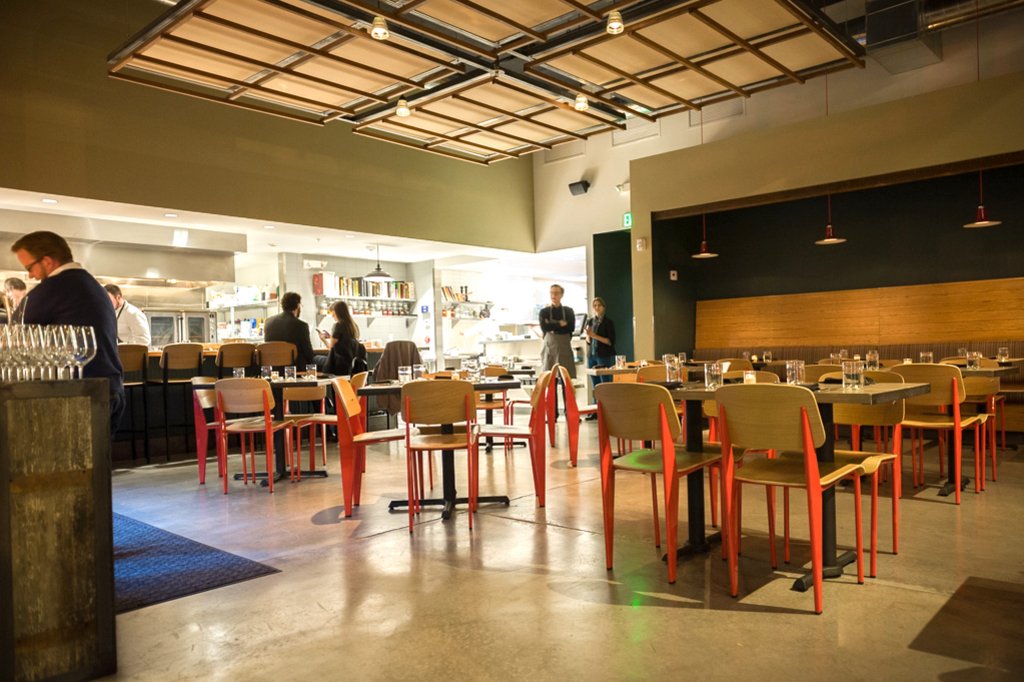 Main dining room in L48. All photography by Glenn Ross

2020 Lawrence, the address of Lower48, occupies a quite and relatively uninhabited corner of downtown Denver. Many would consider this location a part of Ballpark but co-owner Mario Nocifera was quick to point out that this is a misconception:

“This actually isn’t Ballpark, it’s technically Arapahoe Square. Kind of a dead zone but a very unique neighborhood,” he explained.

Dead zone or not L48, as the place has come to be known, is a lively addition to the area. The interior is modern and angular, just like the LEEDS-gold certified building it is placed in, and has an industrial feel to it. Old Californian rail road ties and reclaimed  mahogany from 1930s boxcar highlight the space. These pieces along with many others pay homage to its name “Lower48” which represents the 48 continuous states of America. This inspiration however does not end there. L48 refers to themselves as a “modern American restaurant,” a term that is a very general and usually refers to a menu that is upscale and unrestrictive. However for L48 it is literal in many ways and not just in terms of its decor. Nocifera explained:

“We’ve gathered a lot of our techniques from around the regions. [Executive Chef and Co-Owner] Alex  was just in South Carolina for a bit at some important restaurants down there and up in Boston at a food historian’s restaurant. But a lot of what we are from this country is from outside of our nation. So a lot of our preserving techniques might have started somewhere else but they’ve been adopted for America.” 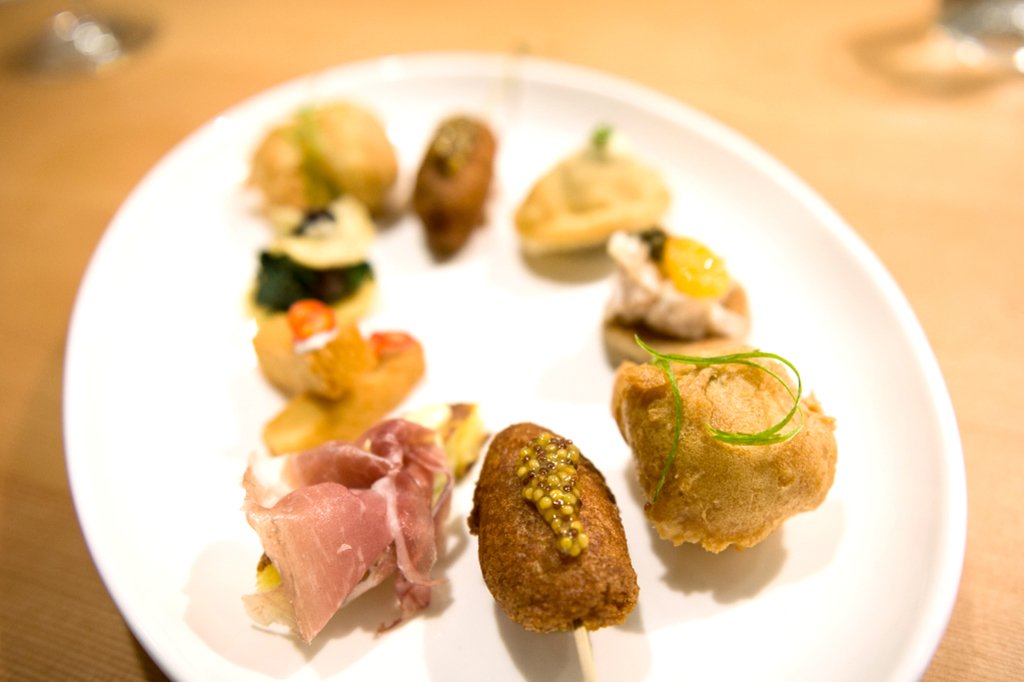 Plate of small “bites” average at about $2 each. All photography by Glenn Ross.

The use of pickling and preserving isn’t exactly a fresh trend, but with the craft and expertise of Executive Chef Alex Figura everything that might once seem old is completely new again. The list of small bites, only totaling about $2 per serving is a perfect example of their ingenuity. Typically a beignet is commonplace on any menu, but here it is filled with whipped tarragon cream that ooze a deliciously colorful green and is just as surprising to taste as it is to see. The oat cracker was also wonderfully shocking as it appears to be completely bland on paper but was truly rich and flavorful on the palate. The main menu items were also equally delicious but once again apply to the same rules. If you’re unsure of it, it’ll probably be wonderful. The octopus and citrus dish confirmed that superstition and was the star of the night. Personally, it made me really excited about L48. It was truly one of the most perfectly executed dishes I’ve had this year and maybe ever. Unfortunately the menu rotates daily  so this perfect dish is not longer available. However, after sampling what this team can put together I am more than excited to see what they can whip up next. Make sure to check them out but first leave all your expectations and any food prejudices you may have, at the door.