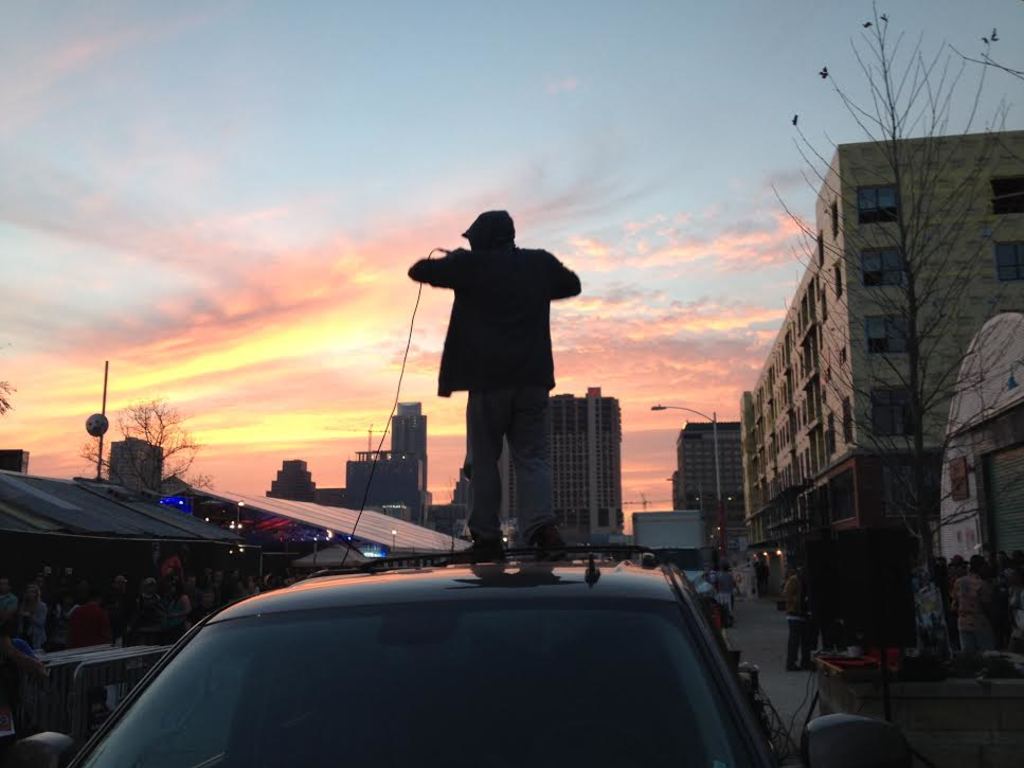 SXSW day two is really when it all sets in. You’re going to be walking all day, potentially getting lost and dodging zealous music enthusiasts in order to navigate your surroundings. If you’re way into the independent music scene like we are, you’ll love it. Friday afternoon, I was on deck to cover the Spin Magazine showcase at Stubbs and while it was most certainly exciting to see Schoolboy Q, most of us felt like we rolled out of bed and into the arena.

Schoolboy was positively wonderful and charming on stage, choosing to lightly complain about his staging by rocking at least three additional songs from his catalogue. This later resulted in his microphone being cut, which he took in stride, laughing and crowd surfing instead.

By the time the TDE superstar left the stage it was time for me to mob over to the Gibson compound for a press corps invite to Aloe Blacc and Allen Stone’s dual performance for coverage with Grunge Cake Magazine out of New York. If you plan to experience the fury of indie music and slimy hands in the air (the best part, really), then the press corps isn’t somewhere you’ll want to hang out for hours. Even if that means watching Allen Stone move around like a regular. Blacc and Stone performed an electrifying set of collaborative influential music before Aloe headed over to Vulcan Gas Company for his show with Exile.

We were there waiting to take the stage while Exile warmed up the crowd. The producer hasn’t lost one step and entertained the crowd at the OkayPlayer showcase with gusto. By this point we were tired and just a bit sticky from the day’s work but that didn’t stop the dance floor from filling up entirely during Aloe and Exile’s set. In addition Sango absolutely stole the show as he let the beat build through the state of the art Funktion-1 speakers.

The next day was the big one, as the Welcome to the D.O.P.E. Game boys were preparing to take the stage for the Allhiphop.com showcase with A$AP Mobb and company. Saturday morning was rainy rainy rainy and clearly the crowds were taking their time coming out of the woodworks. By the late afternoon the clouds were clearing and the lines were long. The AHH showcase was wildly entertaining and rowdy in only a way hip-hop can be. The drinks were flowing and a conspicuous cloud of smoke layered the entire place (surprising, considering Texas is so serious about its anti-marijuana behavior).

Across the street Erykah Badu was rocking The Fader Fort to high heaven. Her voice, laden with the influence of Chaka Khan created an ethereal presence throughout the entire block. Up and coming MC Raz Simone was setting up shop on top of his Tahoe out front rocking a guerilla style set for the folks still standing in line and such and the crowd was enthused.

By Sunday, most everyone was SXSW’d out. A bit bedraggled and tired but inspired by the music nonetheless.  We started on our long trek back to Denver with a renewed sense of creativity and motivation. Luckily, there were no police escorts, K-9 involvement or searches to be had and our memories live on in Austin happily ever after. Until next year, that is.