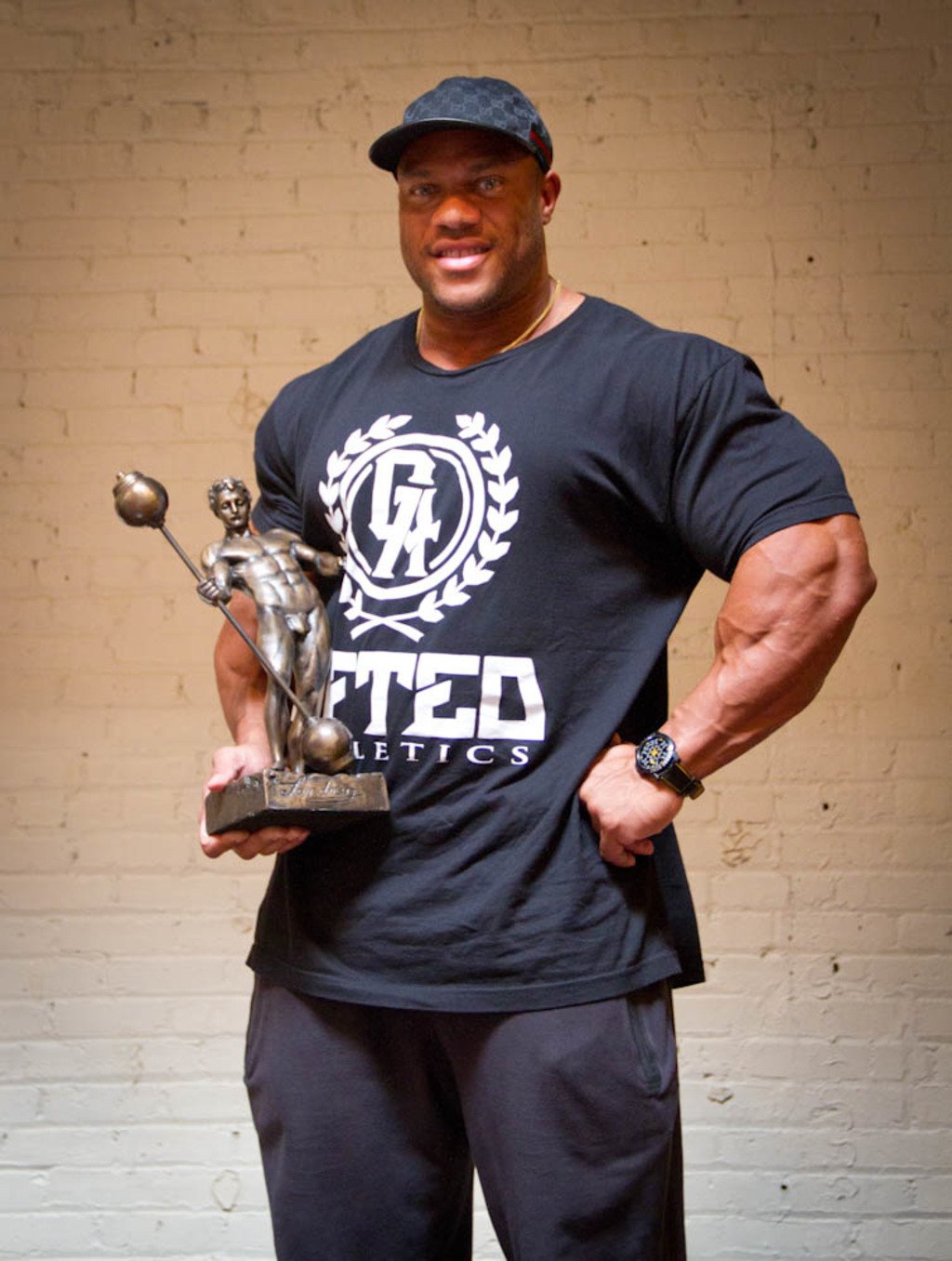 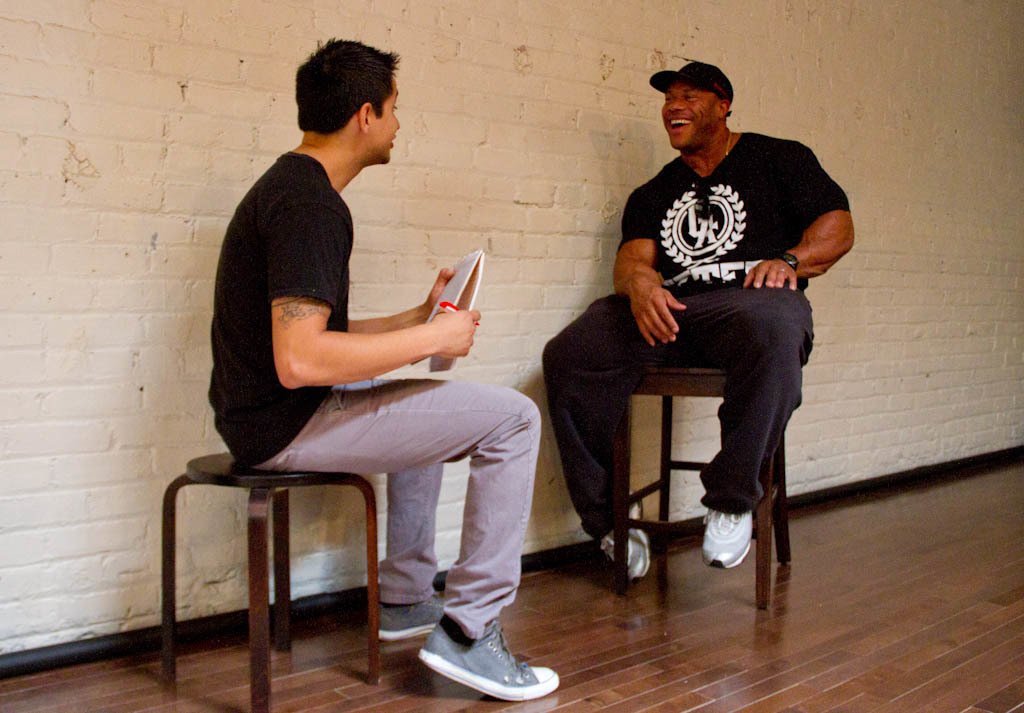 Not for a second does Phil Heath look like a regular guy. When you see him you’re slightly at ease by his height, though humbled by his frame; you’re not quite sure if he should be in a three-piece Armani suit wielding a cane-sword or shirtless with war paint and ammo sprawled across his body firing a bazooka.

His Louis Vuitton hat screamed style even when dressed in sweats. His sweats, which could be used to channel one’s inner MC Hammer for a guy my size, barely fit his bulging legs. His Gifted Athletics T-shirt (Phil’s own personal clothing line) is a summer dress on someone who doesn’t have boulders for shoulders. And when he pulled in front of Qi Athletic Club at 26th and Walnut in a beaming baby blue  Bentley and gripped the wheel as he came to a halt with arms that looked one enraging moment away from ripping the entire steering column out, I knew this would not be a normal conversation. Phil shot me a wave and motioned that he was going to find parking in the back- meanwhile I did my best in finding matching chairs to set up in Qi’s back room yoga studio for our interview.

I introduced Phil to the Qi staff as I walked him to the yoga room to sit and chat. The excited kid in me wanted to ask Mr. Olympia to lift every heavy weight in the gym just so I could marvel at the muscles bulging atop his muscles. But I figured he didn’t want to be bothered with work during an interview – luckily.

“I actually don’t really like it when people ask me to take my shirt off or pick up heavy weights,” Heath admitted, “It’s my job you know, I bust my ass to look my best for competitions, not to show my abs in the street.”

“Arrogance is not in my persona,” Heath said, “but I have earned the right to be called the best in the world.”

Not just the best in the world, but the best in the world for three consecutive years. Phil “The Gift” Heath has won the Mr. Olympia title for the past three years, not to mention every competition in between. Claiming the Mr. Olympia title is a feat only 13 people have been able to achieve in the competition’s 49 year history. Movie star and politician Arnold Schwarzenegger is a seven time winner himself and was able to springboard his iconic career in large part due to his success as Mr. Olympia. 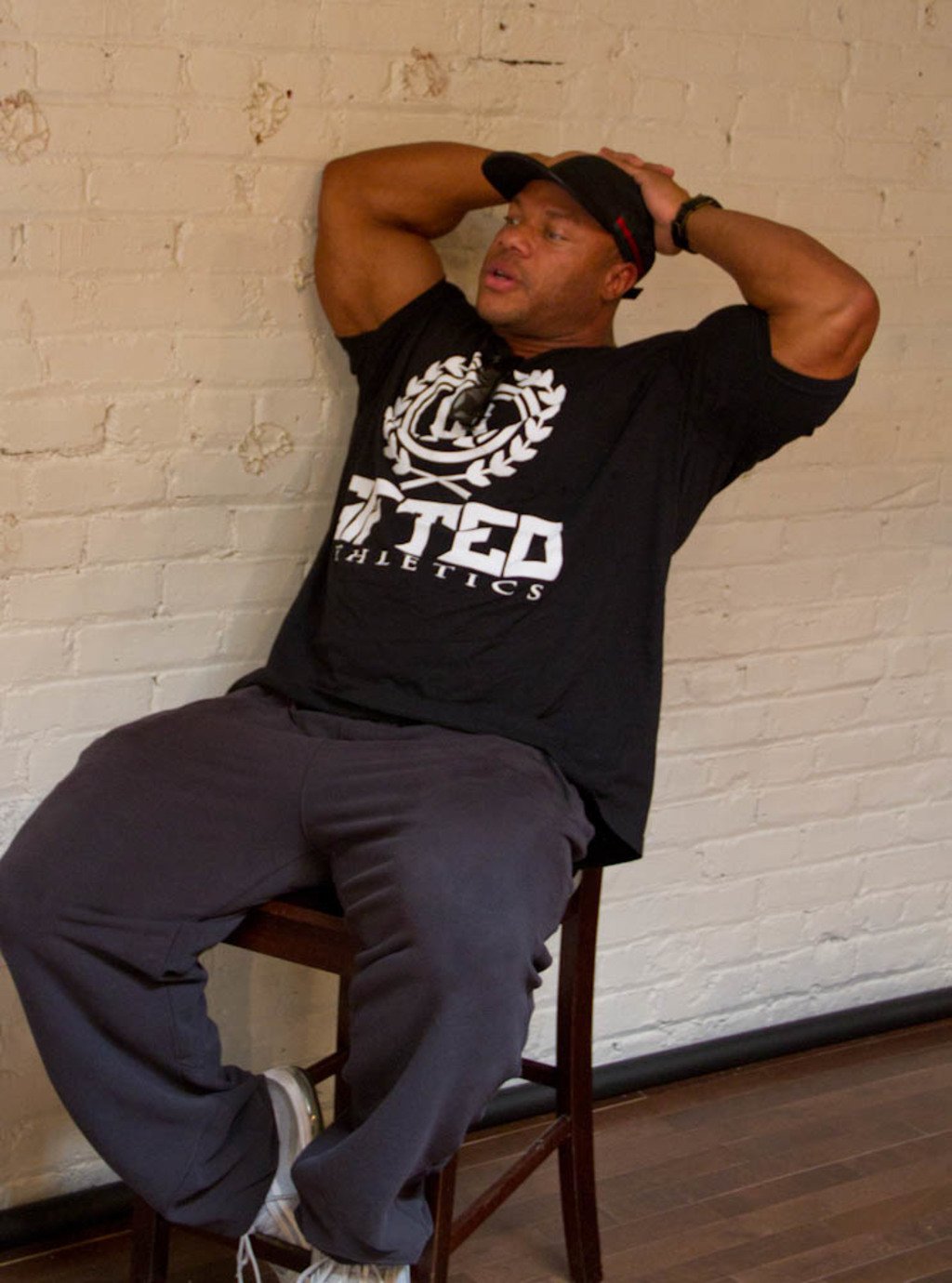 Phil hasn’t quite christened his career on the silver screen like “The Govenator”, but all that is yet to come. For now he is a global celebrity in the world of body-building who gets to tour the planet and make a dream-living flexing for crowds. However, Heath does seem to be following in the footsteps of the Terminator and his idol when last month he appeared on TNA Wrestling’s marquee Pay-Per-View event of the year, “Bound for Glory,” where he got to try out his acting skills and ‘choke-slam’ a ‘jabronie’ in the process as part of the BroMans tag team. Schwarzenegger flexed his wrestling muscles back in 1999 at WWE Smackdown when he came from the crowd in a blazer and turtle-neck to whoop up on Triple H.

That’s not the only similar path he has followed his archetypal predecessor into. “Generation Iron,” a documentary chronicling bodybuilders preparing for Mr. Olympia is the Phil Heath version of “Pumping Iron,” a documentary from 1977 that followed Arnold as he plotted the defense of his sixth Mr. Olympia title. This is the film that helped Schwarzenegger cement his place as a household name- Phil hopes to follow suit with the release of “Generation Iron.”

Fresh off a win at the Arnold Classic Europe, Phil knows the target on his back grows by the day, just like it did for Schwarzenegger and every other Mr. Olympia before him. “Defending that title puts a target on your back,” Heath said, “and when you’re the champ, people are always gonna root against you.” But Phil believes he can win people over with unrivaled drive, intelligence, positivity and respect. “I’m very fortunate and very blessed,” he said, “the last thing I want to do is disrespect an opponent.”

Though not all people are convinced that in addition to being the heavy weight champ, Phil is also a rational guy- as proven by a twitter feud here and there. Like most celebrities, Mr. Olympia has his cynics. “Someone wants to talk trash on twitter? That’s fine.” Heath said “But they don’t know who I really am, I’ll shut down their negativity with my intelligence.” Phil wants to help change all the negative stereotypes around bodybuilders and drop the “meat-head” stigma.  Having double majored in IT and Business Administration at the University of Denver, where he was also a collegiate basketball player, Phil has always liked to keep his mind sharp. He was classically trained on the piano from his youth through high school, fancies himself a bookworm and was recently studying Mandarin for a trip to Beijing last month. Phil said he always aims to be more well-rounded. 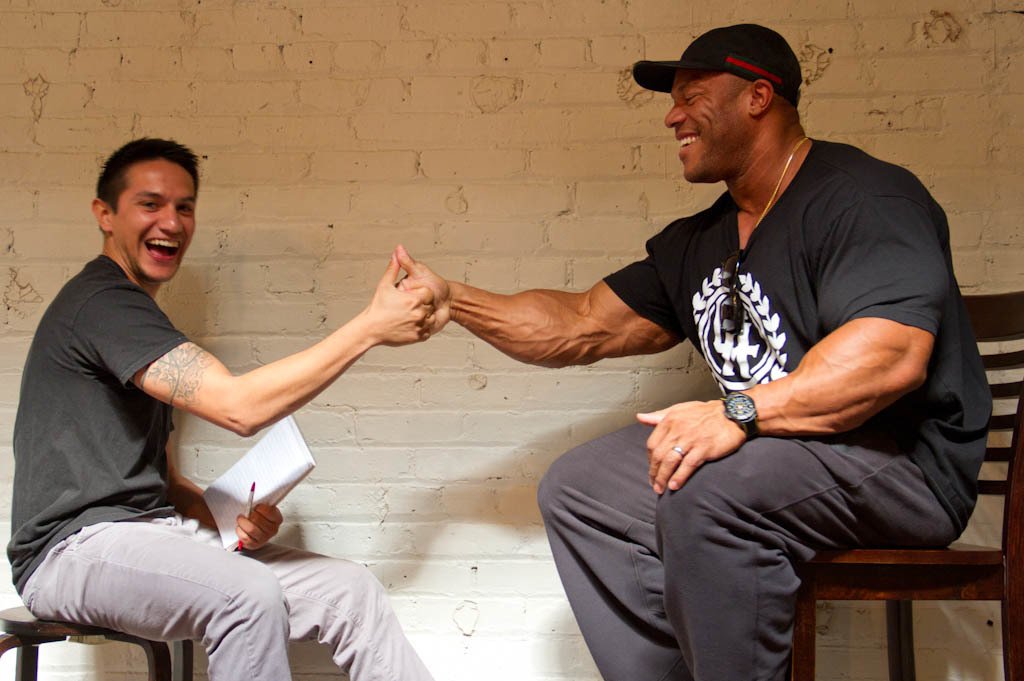 To help maintain his status as the world’s best, Phil says a quick prayer before each workout to get his mind right and his heart completely into it, then he gets his playlist right, throws on his Beats headphones and from then on it’s tunnel vision-no one else exists.  “I wanna look a little bit better everyday, and practice never makes perfect. Only perfect practice makes perfect,” Heath said. A healthy diet and proper after-workout treatment are also imperative to keeping him looking and feeling his best- Acupuncture, ice and heat three times a week is how Mr. Olympia recovers.

Our time together was coming to a close and Phil could have talked into next week: I knew I would never have another opportunity like this so I finagled it into the conversation, built up a bit of courage and challenged Mr. Olympia to a thumb-wrestling match. I regard myself as somewhat of a thumb-wrestling champ. Let’s just say I haven’t “officially” lost a match in my entire career, which spans all the way back to 10th grade. (Plenty will attest to this!) So I took my shot. I gripped hands with the world’s best bodybuilder, felt the callouses on his hand line up perfectly with my fingertips and suddenly I was locked in. With a vice-like grip he stared into my eyes as if to say: “You’re going down.”

Now this next part is entirely true: I pulled some quick and erratic thumb work to get out of a pin, then left my thumb there to bait him in. Per my plan, he went for the pin again and I swooped around and clamped down on his thumb with every bit of strength I never knew I had, gave myself a count to three, threw my notebook down, my hands up and declared myself the winner. Phil laughed and smiled and let me have my moment- but I’m certain that deep down he wanted nothing more than to beat me- every great competitor wants to win every competition, but Mr. Olympia let me bask in victory without squeezing my hand to dust. Phil “The Gift” Heath is a class act and a man who will far transcend his role as a bodybuilder.