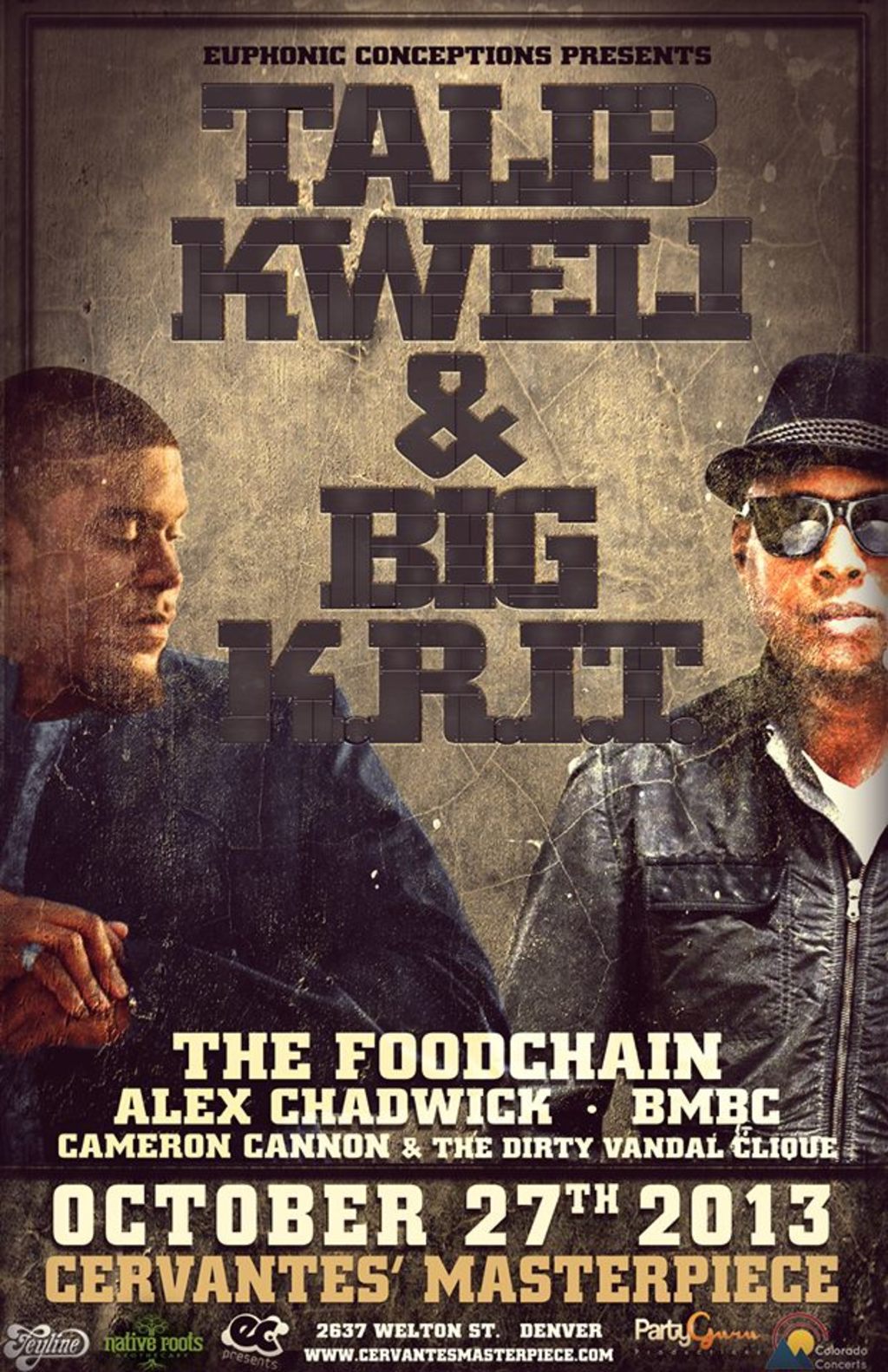 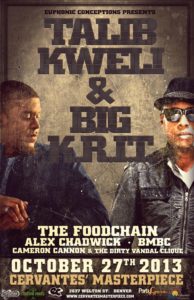 Being that I am a fairly fresh Denver transplant, discovering new electrifying music venues is still a common experience.  I got a treat walking into Cervantes Masterpiece Ballroom.  This was the exact venue that I thought should host New York native rapper Talib Kweli.  Combine that fact with Southern rapper Big K.R.I.T. was opening for Kweli and the bill shaped up to be one that could provide sparks for the rap scene in Colorado.

From the start of Big K.R.I.T.’s set you could tell he enjoyed the energy Denver was bringing to the show.  On a Sunday night, the venue was packed to capacity early to see the critically acclaimed but still fairly underground artist.  If you haven’t seen Big K.R.I.T. perform live, he tends to fill the room an aggressive demeanor that demands the crowd to jump around with him.  Though Big K.R.I.T. has only released one studio album, the crowd seemed to know most of the lyrics to these songs and various songs from his mixtapes.  This speaks to the true strong underground following he possesses and makes me believe that one of the 2011 XXL “Top Freshman” is ready for a breakout year in 2014.

Just to give full disclosure to my readers, I have been a fan of Talib Kweli since the late 90’s when he was a part of Black Star with Mos Def (which will be coming to Cervantes Masterpiece Ballroom on Nov. 15th).  I am always amazed when I mention Talib Kweli’s name as one of my top artists and my friends look at me like “who is that?”  I generally make it easy on myself and explain to them that Jay-Z in a rhyme once said, “If skills sold, truth be told, I’d probably be lyrically Talib Kweli.”  Generally after that, the smartphones come out and a quick YouTube search makes them appreciate one of the most talented artists to never truly become a radio star.

Being that Kweli has been around close to 20 years, his sets generally vary from well-known hits to freestyles on popular artists records that I sometimes have a hard time believing aren’t rehearsed for every show.  One of my favorite things about being at a Kweli show is that it generally is only filled with true rap and hip-hop fans.  This provides an authenticity to the performance and helps the artist pick music he loves to perform and not always the radio hits that most artists are required to play to justify the ticket prices to fans.

After Kweli’s hour set, the fans chanted his name before he came back to treat fans to an encore and an exclusive track from his upcoming project featuring Kendrick Lamar.  I have seen Kweli four times now and it always seems like start to finish he puts on a show that you feel good about spending your hard earned money on.  The next time he is town, do yourself a favor and see him perform live.