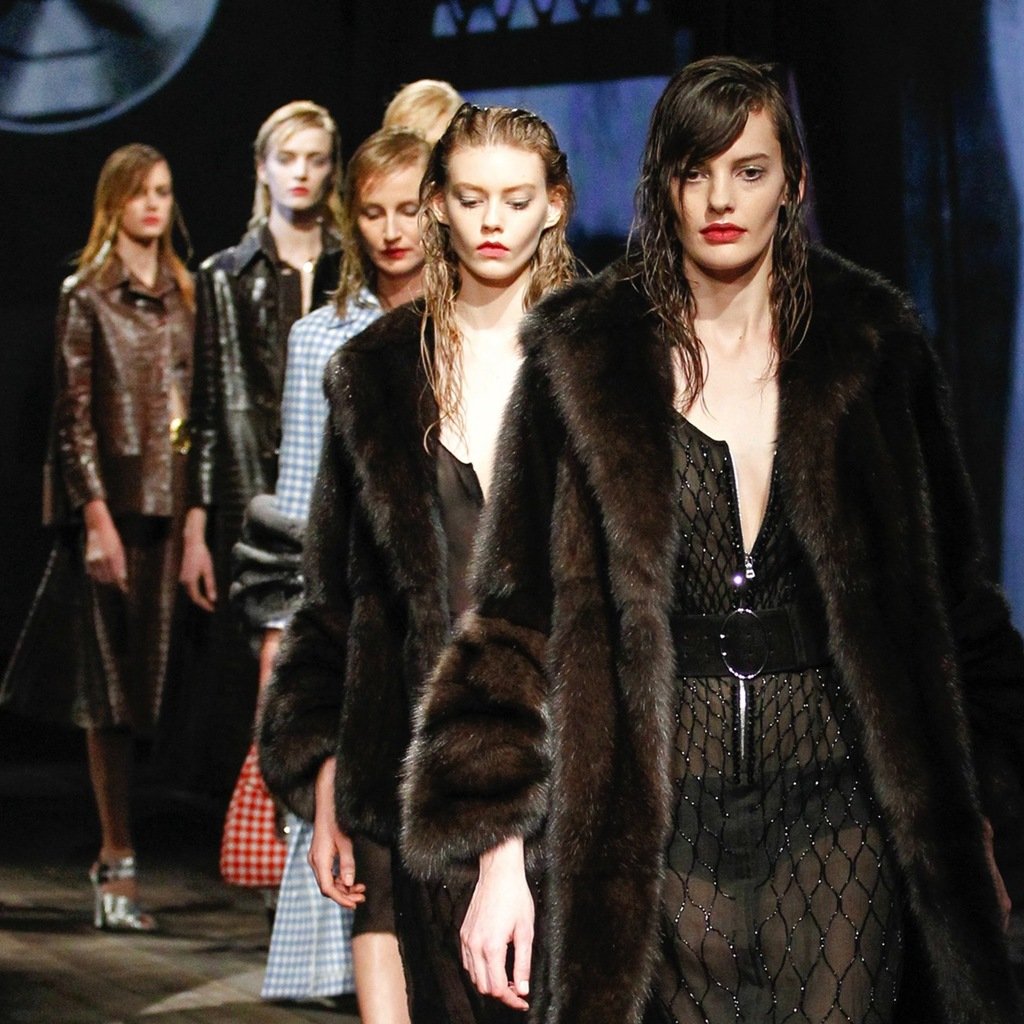 This is not a review of clothes ( I already did that here) but a discussion of the shows themselves. My criteria for this was not whether the show was large or impressive, but whether it conveyed a feel that went along with that of the clothes. Sometimes shows go ahead and become a large or grandiose spectacle that lose the clothes in the process. So here I will not be talking of enormous or impressive sets, but of shows that created a consistent and thematically coherent atmosphere.

Honestly, it was difficult for me to find my favorites, not because I had a large amount to choose from, but simply because very few of them impressed me. This is probably a personal issue, as I am very partial to McQueen, Martin Margiela and Galliano, all three of whom no longer hold shows. Maybe I am just being cynical and overly loyal, but that’s that. Anyway, here are my four favorite presentations of the fall / winter 2013 season.

Prada’s theme of the Noir Woman was explicitly presented on the runway set, as it incorporated common noir motifs and imagery. The set was littered with references, like shadows thrown by venetian blinds, dramatic lighting, moving fans, cats and an industrial flair. Instead of the usual straight catwalk, the models walked down a path that wound around and through sections of the audience, causing them to flit in and out of shadows. The overall feel was that of being on a movie set, while the heroines paraded from one scene to the next.

Pugh’s show was rather simple in set and setup. There did not seem to be any extraneous additions to the set, (maybe the mirror? I’m not sure) save for the fact that it was drenched in an almost complete darkness. The only light present was directed onto the models’ path, thus obscuring most of the audience, and making it seem like the models were the only people in the room. The lighting, as well as the models’ slow winding walk gave them an ethereal and somewhat unnerving appearance. Sure, the set was simple, but the effect was dramatic.

V & R presented their haute couture collection not as a traditional runway, but as something akin to performance art. The duo began on a set reminiscent of a Japanese Zen garden, and as the models filled in they were posed in different sections of the runway. Eventually the models began to be posed next to and on top of each other, causing their garments to become blurred and joined in a way. Perhaps this has something to do with Zen Buddhism; maybe it doesn’t—I’m not familiar. It does however, play with the concept of haute couture. Haute couture’s purpose is (in one of its many facets) to create pieces that are one of a kind, but here these couture pieces are heaped and combined creating joined entities instead of singular garments.

It is not a surprise that this show is my number one, it is after all the show I refuse to shut up about. Owens is known for incorporating elemental forces in his shows, and this season’s was wind and smoke. The runway was the same as it tends to be for his shows – a large rectangular pathway down which more than one model can easily walk. This time around the models’ entrance was covered by a wall of billowing wind and smoke, which played with the clothes and hair of each woman walking though. The effect was transformative, which was perhaps the central theme of the show.

How do you feel about these? Are there any that you loved that I didn’t mention?