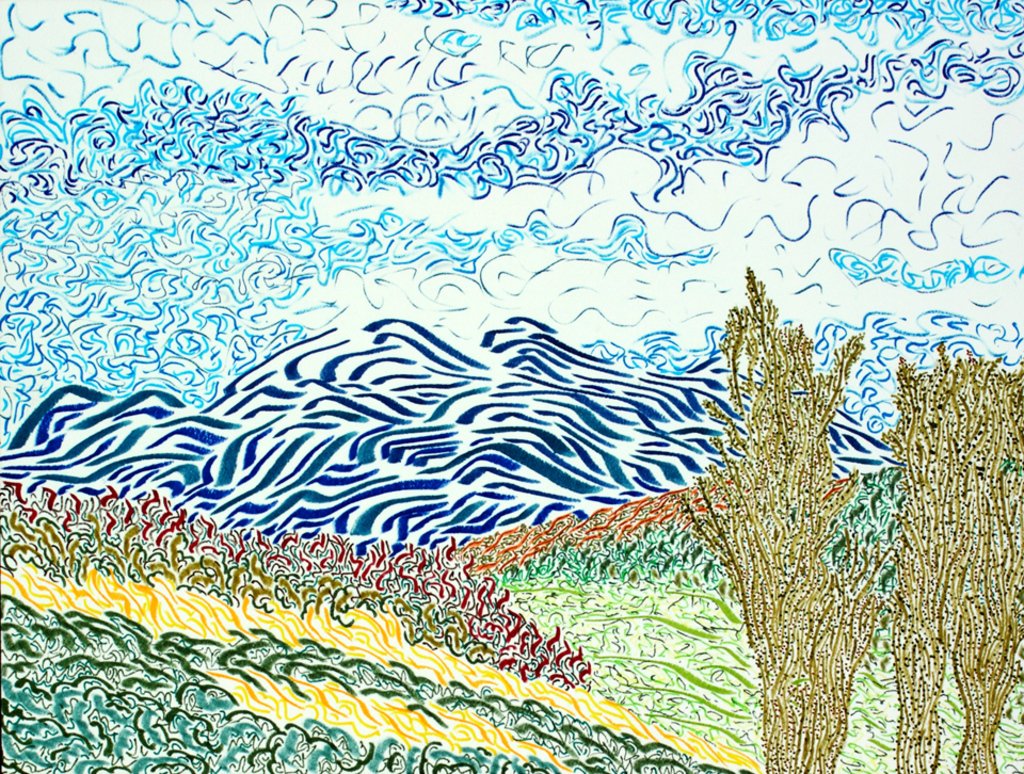 The creative ability and skill of an artist is expressed in different ways. Some choose to use the stroke of a brush that has been dipped in paint across canvas to express their inner creativity. While others use words to tell their artistic story. Ed Ward is one who is a watercolor ink artist, but his “primary interest has always been words”.

This Sunday, August 25th, Ward will share some of those words in poetry at Denver Poets Day. His performance will be 1 p.m.-2p.m. at Skyline Park on 16th Street Mall.  Ward has been associated with Denver Poets Day since 1978 as both a performer and producer.

“As a young poet fresh from Philadelphia I had the good fortune to be part of a line-up that day that included James Ryan Morris (Publisher of the Croupier Press) and Larry Lake (Publisher of the Bowery Press, both of whom were instrumental in shaping my artistic vision,” states Ward.

“Morris demonstrated the honesty and beauty of the vernacular in writing and Lake taught me the duties (publishing and producing) of the artist”, Ward smiles, a sigh and continues “Unfortunately both Morris and Lake dies young, in their forties, and much of my later artistic vision, painting, creative non-fiction, writing ritual marriages and burials, has been the product of my own vision.”

Ward’s voice as well as his stories can lead you on a journey through imaginative and provocative worlds, and sometimes allowing you to question the subjects and rules that have been placed before society. Or they can simply take you on a vision quest.

“Over the years I met others who had a great influence upon me as well, especially Tony Scibella whose monumental poem, The Kid in America, I published in 2000 via my small press publishing imprint, Passion Press/ImageMaker. A review in Europe of The Kid in America began: “Not since Walt Whitman….”, smiles Ward. “A man I never met, but whose voice I fell in love with via a live radio recording that Larry Lake produced in the early 70’s, also impacted me greatly: Stuart Z. Perkoff. To this day, I use Stuart’s poem Invocation just before the exchange of rings in my wedding ceremonies.” Ward and his wife, Marcia Ward are both ministers and have been officiating and photographing weddings for 30 years, sometimes conducting 80-90 weddings a year. 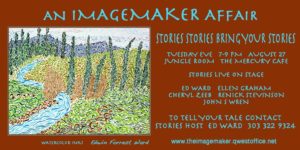 “I began as a poet, but have moved away from poetry, taking up the art of crafting stories. I write for a live audience as opposed to writing for the page. Something about a good story insists it be oral rather than written and so the last ten years or so I have focused on producing both one man shows (Lucky and Testosterone Monologues) and story telling evenings that involve others. STORIES STORIES BRING YOUR STORIES is a monthly show I host the forth Tuesday of every month in the Jungle Room of the Mercury Café in Denver, from 7 p.m. – 9 p.m.”

STORIES STORIES is in its forth year, and Ward’s purpose is to provide Denver with an evening “alternative to the same old same old of watching TV, catching a band in a bar, or attending an art opening. I consciously create a mix of storytellers: men, women, young, old, tellers, readers, actors, novices and old pros. Over a hundred different presenters have shared their stories live on stage, and the audience is as attentive as it is enthusiastic,” smiles Ward.

Join Ward this Tuesday, August 27th for the 42nd installment of STORIES STORIES “and features tales by the artist Renick Stevinson; the networking master, John S. Wren; the playwright, Ellen Graham; the performance artist Cheryl Zeeb and myself. A sampling of a STORIES STORIES evening can be had this Sunday as part of Denver Poets Day 2013 in Skyline Park on the 16th Street Mall at 1 p.m. as I will be hosting an hour of storytelling. Cheryl Zeeb and Leslie Langsdon, a bride whose ceremony I performed some ten years ago, will share the stage with me. I’ll be sharing a piece entitled Taboo, a tale of prejudice that highlights the differences between ignorance and arrogance and being young and old.”

Ed Ward is an artist who has a way with words. Thank you for keeping the art and heart of story telling beating and alive in Denver. Step away from your normal routine and be inspired by the creativity of poets and storytellers that live and breath in Denver.