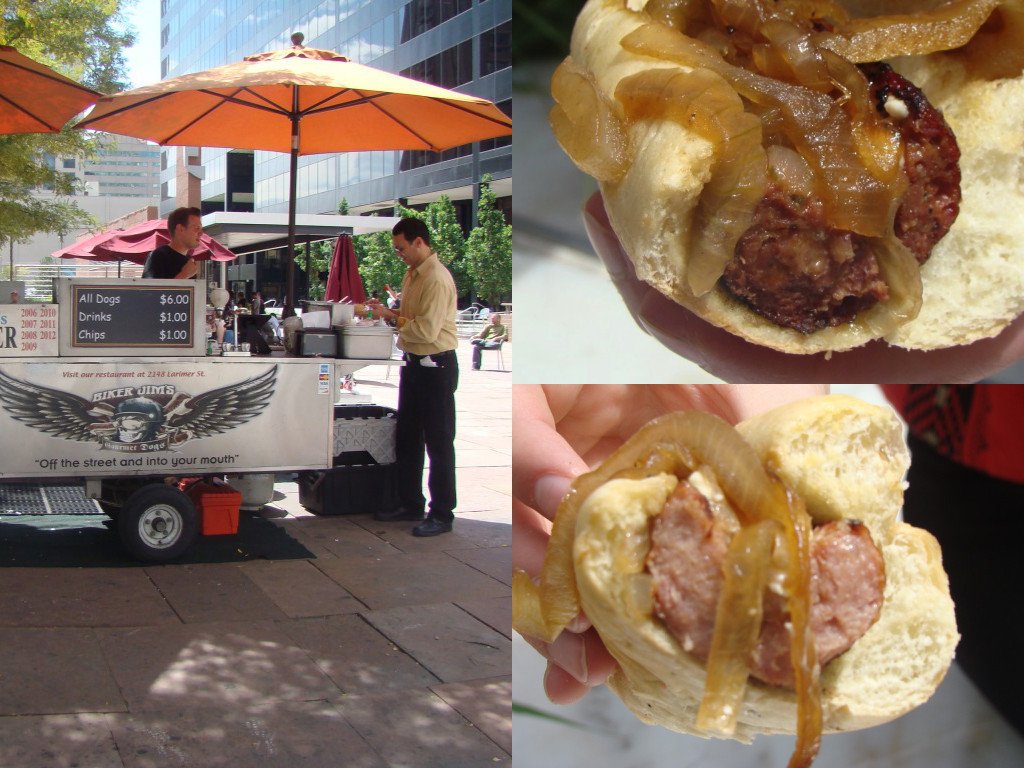 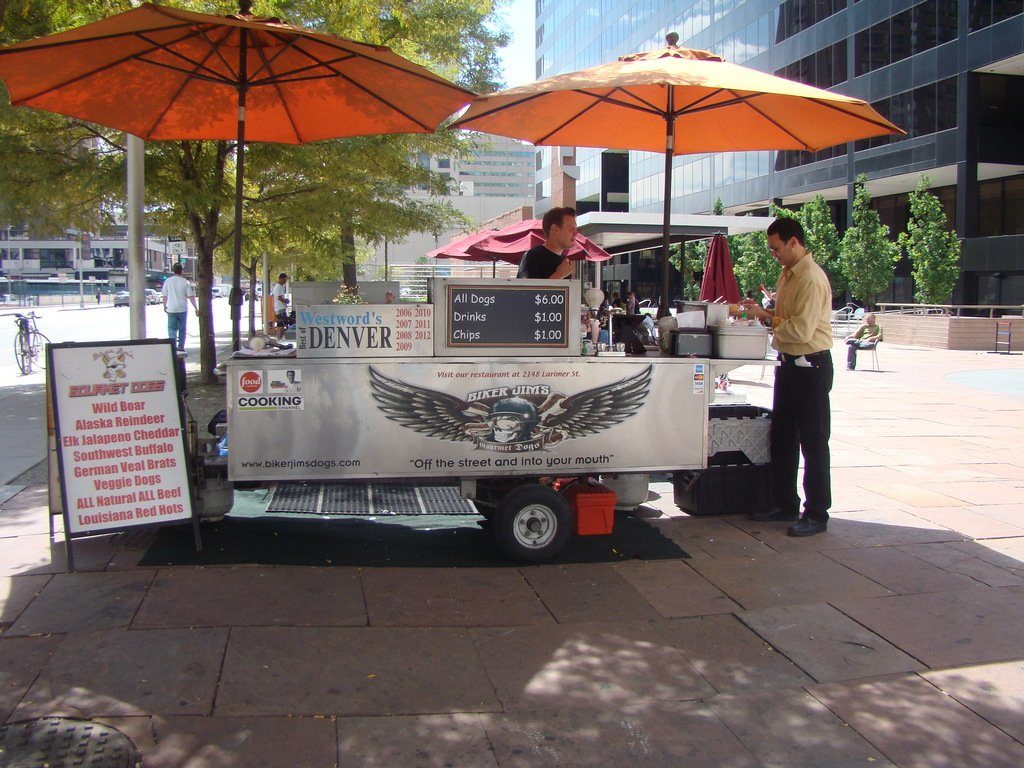 Where: Check out the original cart at the 16th Street Mall.

If you live in Denver you probably know about Biker Jim’s by now. His gourmet hot dog cart is probably the only one in the nation that can say it’s been featured on multiple TV shows. The list features not only includes Anthony Bourdain’s “No Reservations” but Andrew Zimmern’s “Bizarre Foods” as well. If this many people endorse it they can’t be wrong, and I assure you they aren’t.Biker Jim’s is just about the best hot dog in town. If you’re one of the few that has yet to try his dogs, now is the time. We will lead you into the light and out of that rock you’ve been living under. One hot dog from this place and you will understand the hype.

Biker Jim’s is a simple concept done in an out of the box way. On one hand it’s just a hot dog cart and there are plenty of those in the world. But the other there are not very many hot dog carts that serve reindeer and elk on the menu. And that’s just the tip of the iceberg, they also have wild boar and buffalo just to name a few. People are adverse to trying game meats but I assure you there is no gaminess here. By serving up game meats in a hot dog it does two things. One, it places in an ingredient that most people have never tried into a familiar setting, the hot dog. Two, seasonings get added with the meat before its encased so it gives the meats lots of flavor and tones down the gaminess.  These gourmet hot dogs are just the way to introduce your taste buds to new foods. 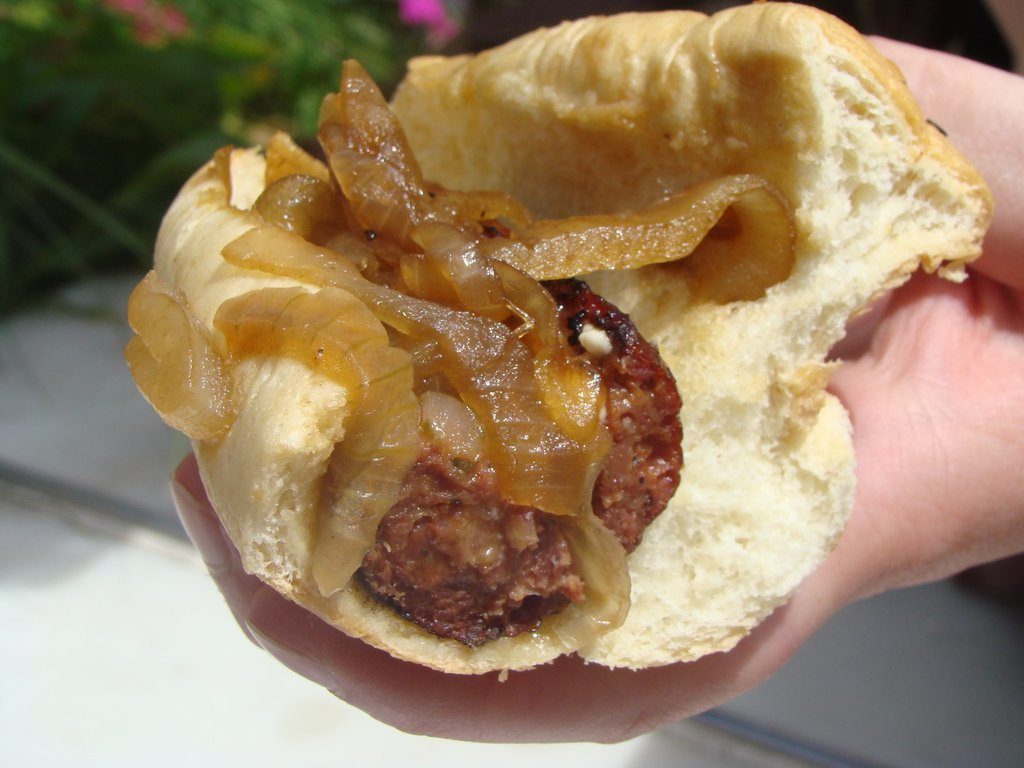 My recommendation for Biker Jim’s is the Reindeer Dog. This dog was an easy pick when owner Jim was coming up with the hot dog menu because he used to hail from Alaska. But if you don’t come from Alaska you probably haven’t seen it on your weekly menu. So for a Denverite I just felt like a badass saying I ate reindeer. Other than making you feel adventurous this hot dog will hit the spot. The reindeer sausage has a flavor very similar to kielbasa. It was smoky and very mild but had great saltiness. It was topped with cream cheese, the dog  has a richness and a little sweet element. It also gets topped with caramelized onions which are sweet and tender and add some texture to the hot dog. The bun was also phenomenal. It’s hoagie roll that had a nice chewy outside but a fluffy, soft inside. The bun was perfect for holding together the sausage and all the fixings.

This reindeer dog was extremely tasty and high quality all the way. There are no cutting corners when it comes to Biker Jim’s. That’s partly due to the awesome cart jockey’s. (And can I just say cart jockey is just the best name ever! It sounds so much cooler than hot dog cart guy.) The cart jockey’s are specifically picked because they have an awesome personality and can multitask. They will chat with you while cooking and taking orders, so kudos to them. They add to the whole experience of eating at Biker Jim’s. So come chat up a cart jokey and try some crazy sausages at Biker Jim’s.  Reindeer, it’s what’s for dinner.