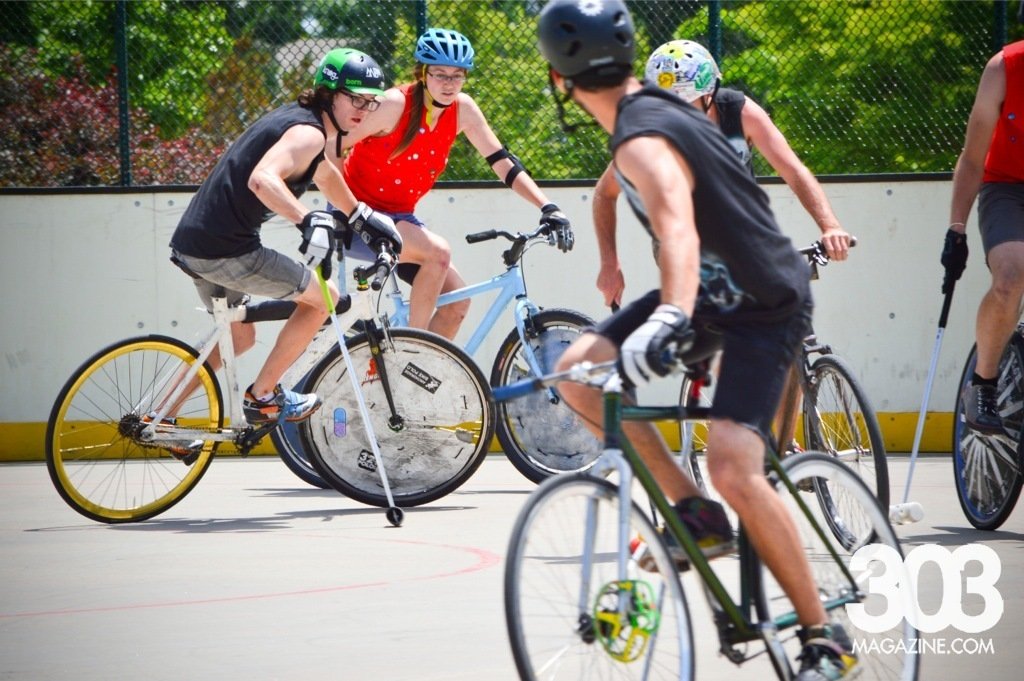 Bikes, bruises, a broken tooth, and people yelling “boobies make me smile”. Sounds like the aftermath of a rowdy bachelor party, right? Wrong. Although good liquid fun was part of the event, an edge of seriousness hung in the air last weekend at this Boulder bike polo tournament where the top six teams had a chance to move on to the North American Championships.

“This was the first tournament I played in last year, and it just made me want to get better and play more and more,” exclaimed John Burgess, member of team Glitter Chunks. 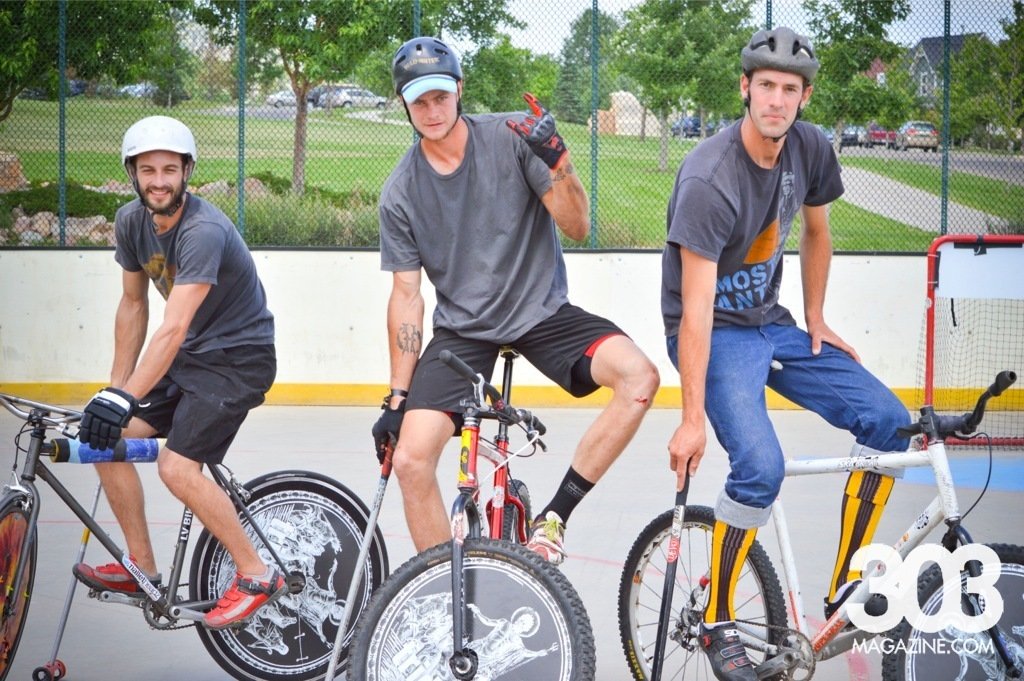 Never having heard of this sport before starting this story – here is the 411 on bike polo: it is basically a mix of horse polo and roller hockey. Players ride their bicycles while attempting to whack a ball into the opposing team’s goal. If a player’s foot touches the ground they have to ride to half-court before getting back in the action. Games are 3 vs. 3 and 10 minutes long. The first team to score 5 points or whoever is ahead at the end of the 10 minutes wins.

Sounds simple enough, right? Not so fast. Try going out into your backyard, riding a bike with one hand, simultaneously trying to steer an orange with a broomstick  — all while being chased by the neighbors’ Doberman, and you will have a good idea of what this sport is about.

Being a regional qualifier this tournament hosted teams from Colorado, Wyoming, Kansas, Oklahoma, and Texas. After two days of competition in the picturesque Foothills Community Park, the six teams that will have the chance to move on to national competition are: Boobies Make ME SMILE, Ghost Wolves, Mucho Take It Easy, Witchcraft, Diablos de Tejas, and Trident (okay, so maybe parts of this sport were invented during bachelor parties).

With the competitive atmosphere of this sport comes a sense of community. Everyone cheered everyone else on, and helped one another up after big collisions — which, trust me, there were plenty of. 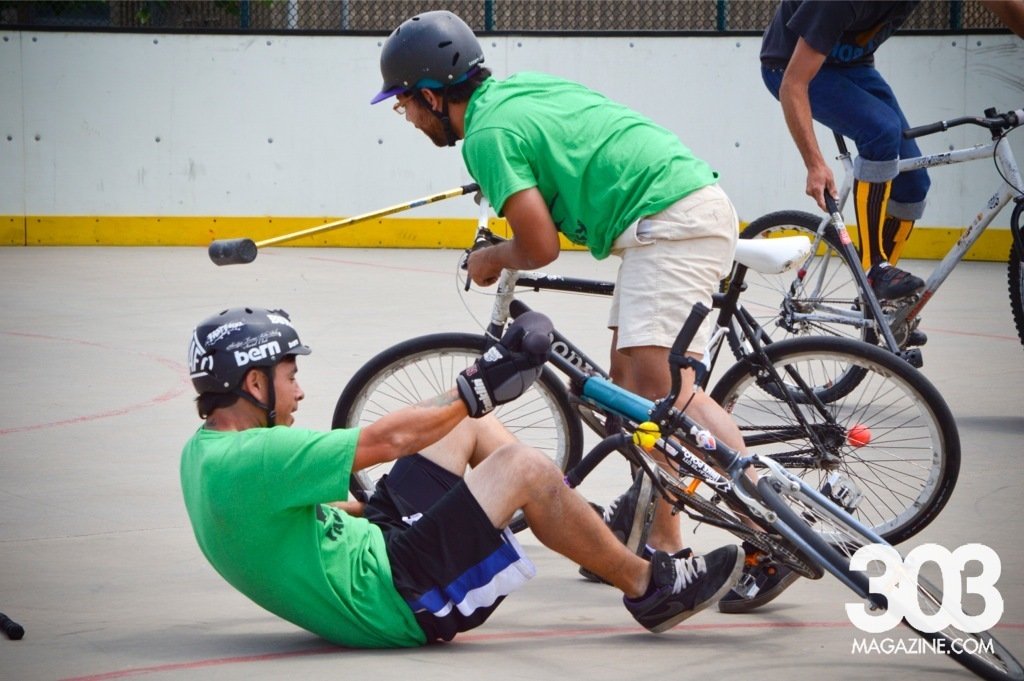 Bike polo is gaining popularity both nationally and internationally. But for some, staying local is as far as the court goes. “Qualifying for the next step-up of play would not mean that much,” said Nick Jenkins, member of team Mystical Beards. “Of course I would welcome it, but everyone on our team is married and works full-time. If they ever came to Denver, I would be all for it.”

Although bike polo is a male-dominated sport, women are starting to get into the action. I spent some time talking to one of the rare players sans a Y chromosome, Maureen “Mo” Grady from team CO-Tex. 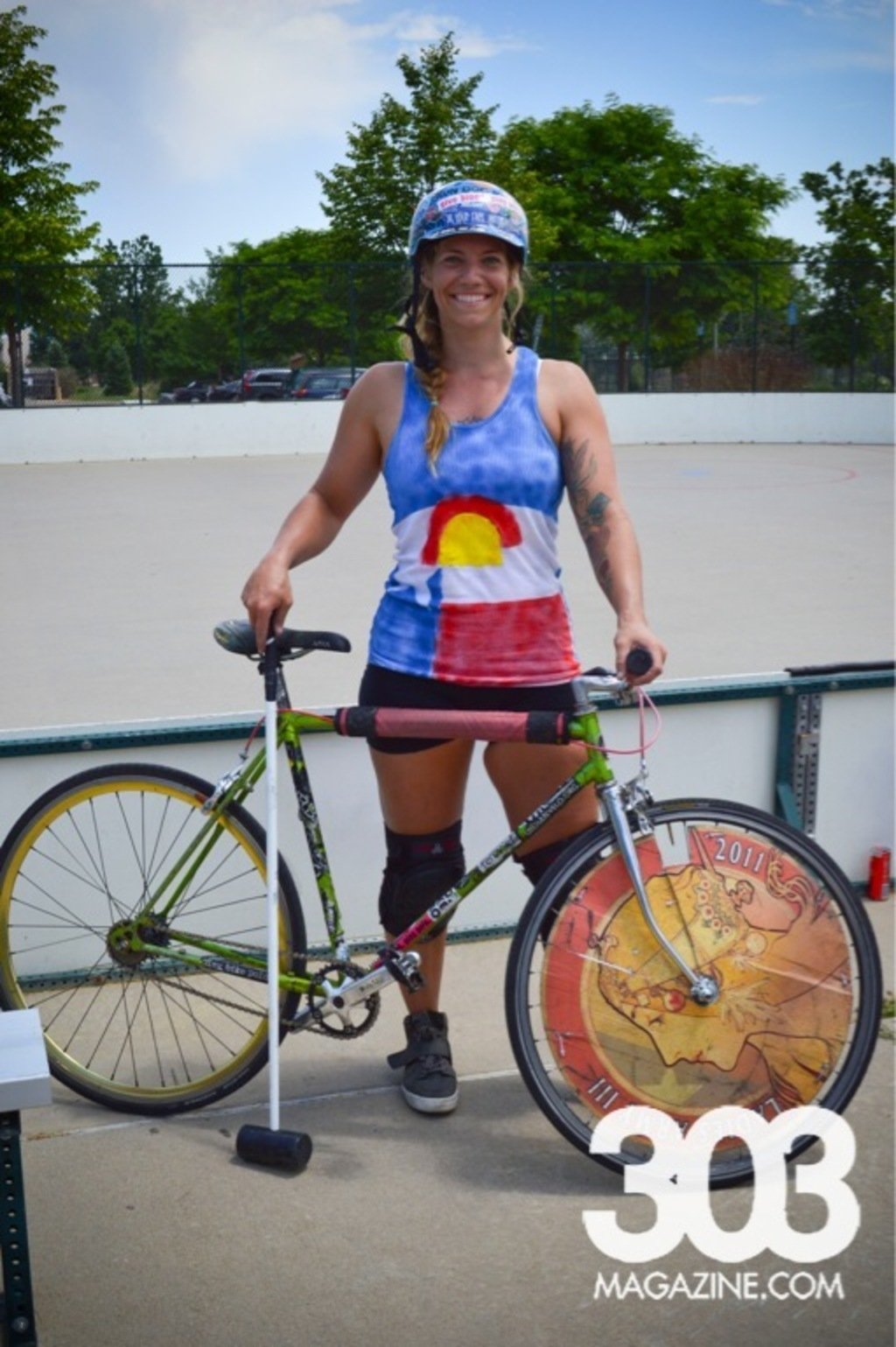 Grady: I had an injury and spent way too much time on the internet when I found videos of bike polo. There was a club in Austin [Texas] that I went to check out, and I was hooked. It was fun right at the beginning. There is really a community aspect. That is the case everywhere. I feel like if I moved here to Colorado I would already have friends.

303: What is it like to be a female in a male-dominated sport?

Grady: It can be a challenge. A lot of times when women play they don’t get as involved – staying in the back court. That’s not my style. I like to get in the mix and play as aggressive as I like to.

303: What would it mean to you to move on to the next level of play?

Grady: I mean, it would be awesome. I am here for fun, but of course everyone here has an inkling to qualify. I know that I am still growing as a player. Especially as a woman in highly male-dominated sport, it would be awesome to eventually make it to the next level of competition.

In addition to 31 games of polo the players had the opportunity to enjoy sharing slices of Cosmo’s infamous pizza, get a caffeine buzz from tournament sponsoring Red Bull, or groove to the sounds of DJ/commentator Brandon Carter. Overall it was an exciting day of competition and comradery – a definite win for bike polo.