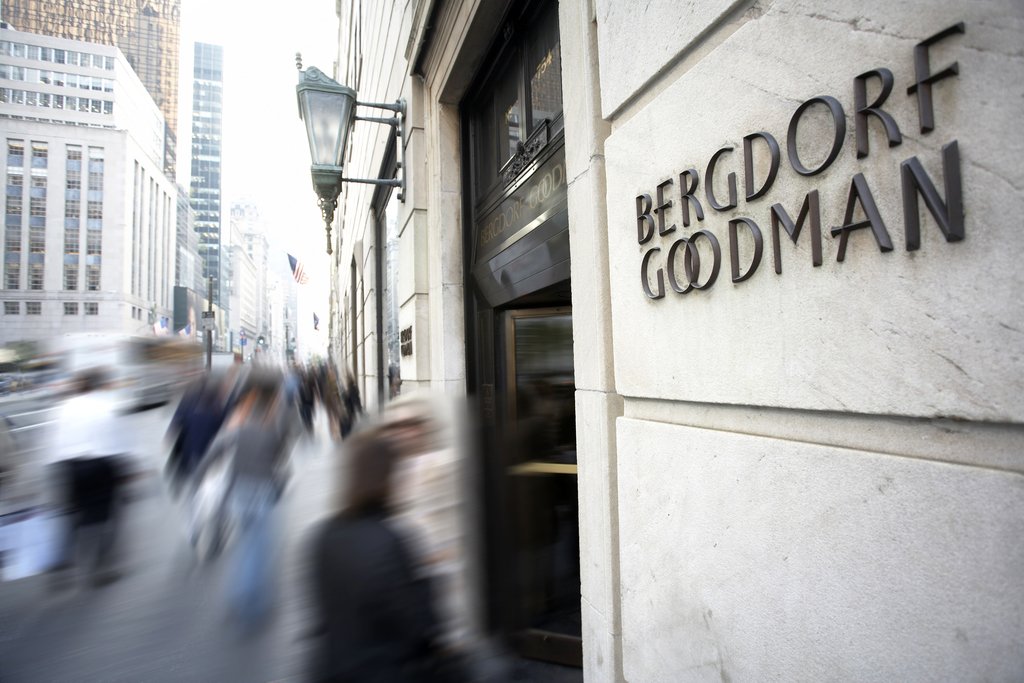 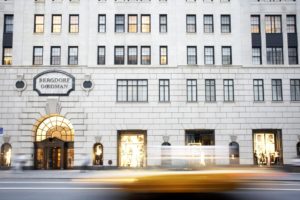 There was a buzz in the air. It was not just any day Bergdorf Goodman closed their Fifth Avenue doors early.

Andrew Malloy was just a boy at the time of one of his most memorable visits to see his grandfather Andrew Goodman in New York City. Goodman continued the legacy of his father by running the modest tailor shop turned iconic fashion retailer Bergdorf Goodman.

Although all of Malloy’s childhood visits to the family store were memorable ones (how about an impromptu meet and greet with Elizabeth Taylor?), this one stood out in Malloy’s mind:

Malloy’s grandfather whispered to him that the reigning Saudi Arabian prince would be making a visit that day.

Soon after, a Rolls Royce trio pulled up to the entrance to the store with an awed Malloy looking on. The prince and his entourage (save his fifty wives) had arrived. Donning long, white, silk robes they shopped the store, afterward leaving with an extra five cabs full of merchandise-filled Bergdorf Goodman purple bags.

Stories like these — tales of a world so far removed it is but a fantasy for many of us — come to life in this documentary-feature film Malloy, senior executive producer, brought to life about the family business.

“Scatter My Ashes At Bergdorf’s” opened to the public in Denver today at the Sie FilmCenter. With a packed house dressed to impress at the special advance screening of the film presented by 303 Magazine May 23, the film has already received a warm welcome by the local fashion community.

“People talk about Bergdorf Goodman as if it is an individual.” — Andrew Malloy

Although Malloy currently resides in Denver working in investment banking, he remains very much involved in the dealings of the high-end department store. Bergdorf Goodman changed hands decades ago from its original owners, however, Malloy and his family remain the landlords of the fashion emporium. 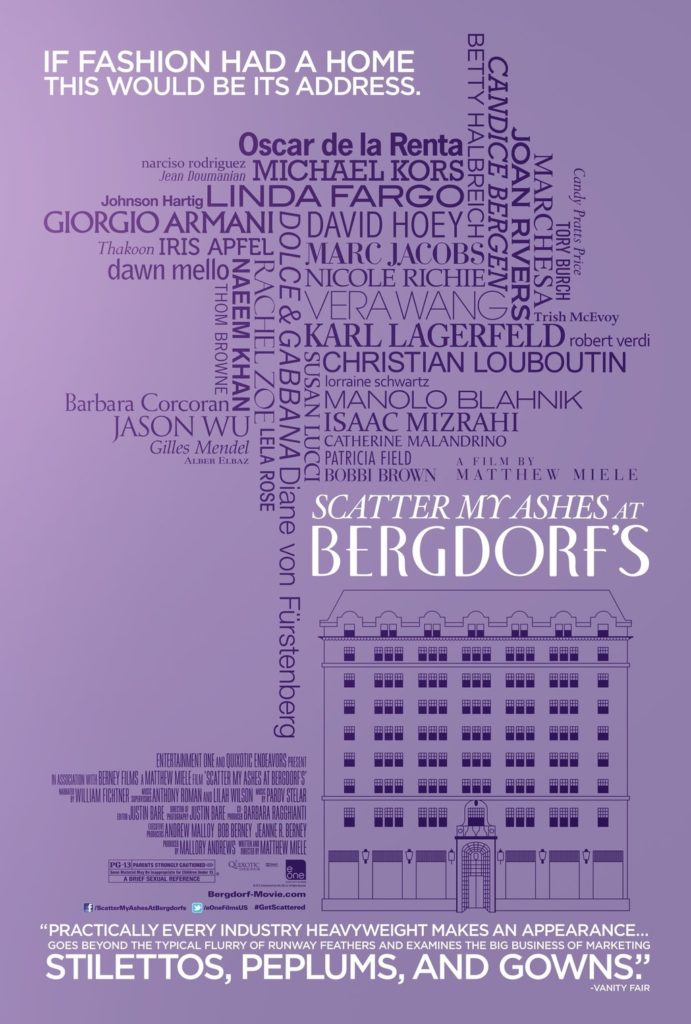 At 93 minutes, the film, directed by Matthew Miele, divulges the inner workings of the store from the infamous shop windows to the fashion designers who knew they had not yet “made it” until their designs were featured on the Bergdorf Goodman shop floor to the famous fashion set clientele — the film offers a rare glimpse into the au courant retailer.

“If fashion had a home, this would be the address.”

The film (rated PG-13) also pays tribute to Bergdorf Goodman’s aiding in the development of ready-to-wear, personal shopping and urban style with commentary by fashion’s elite: Karl Lagerfeld, Manolo Blahnik and Marc Jacobs, to name a few. At 176 interviews and more than 600 hours of commentary, Malloy joked he needed another CPU to hold all the research.

Even though the anecdotes surrounding Bergdorf Goodman are lengthy enough to fill a book, we did have a chance to reminisce about a few with Malloy. Read on for his perspective on the film.

303: WHAT IS YOUR FONDEST MEMORY OF THE STORE? 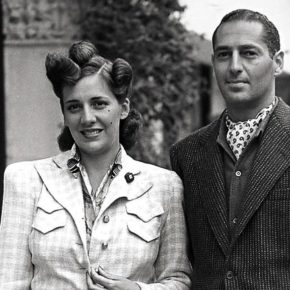 A photograph of Nena and Andrew Goodman, Malloy’s grandparents.
© 2013 Entertainment One Films US

AM: “My memories were actually going into the store. My grandparents had an apartment over the store. It’s well documented that it wasn’t a small apartment. I will tell you as a child in the single digits I remember thinking that was probably pretty typical of apartments in New York … My earliest memories are still of this beautiful apartment. Of course there would be parties and I remember one of my grandparents’ wedding anniversaries at the St. Regis. It was very fancy in New York … If I were to be very honest, I always saw my grandfather as — he was kind of like James Bond to me. The reason I say that is because he was so sophisticated. We could go to a fancy French restaurant … he could speak in those languages. He was just so cool. He was really my idol.”

303: WHO WOULD YOU RECOMMEND SEE THE FILM?

AM: “Anyone who has an interest in: i) A classic American ‘rags to riches’ story of building a business. ii) The business of luxury fashion and luxury brands in general. And iii) Those who are interested in studying fashion and the inner workings of the luxury brand/industry at the highest level.”

303: WHAT IS THE ALLURE OF “SCATTER MY ASHES AT BERGDORF’S”?

AM: “I believe the allure/interest could be in what, in the end, is a story about aspiration and the American dream. Don’t forget that all of our ancestors came to America from other parts of the world — and they still keep coming — in order to make a better life for themselves, their families and have the freedom to work hard. And, if hard work and some luck prevailed, to be successful at their chosen endeavor. As you know, this migration to ‘capitalist freedom’ continues today.”

AM: “We started the project in late 2010 and BG had no real plans for their 111th anniversary. As you may know, BG’s 100th anniversary fell on fall of 2001! Obviously, no celebration post 9/11! When we approached BG, they loved the idea and built an entire theme of ‘111 Years of Extraordinary’ around ‘Scatter My Ashes At Bergdorf Goodman.’ We also produced a book, soundtrack and DVD’s of ‘Scatter.’”

303: WHAT DO YOU ENJOY MOST ABOUT SHOPPING AT BG?

AM: “Well, I will admit to enjoying the experience of shopping at BG. Truth be told, with the exception of ski, golf and cycling apparel (none of which is carried at BG), I buy ALL my clothing at BG and would go nowhere else. Having said that, I only shop at BG during sales and employee discount events.”

AM: “I believe it’s the fact that there is only ONE Bergdorf’s, an iconic American institution and as Karl Lagerfeld and Giorgio Armani say in ‘Scatter’ about BG in the 1960s, 70s and 80s: ‘with a European feel like no other store in the world.’”

See “Scatter My Ashes At Bergdorf’s” at Denver’s Sie FilmCenter (2510 E. Colfax). Tickets are $7 for Denver Film Society members, $10 for nonmembers and $8 for students, seniors and matinees. Call 303.595.3456 or visit www.denverfilm.org for show times.