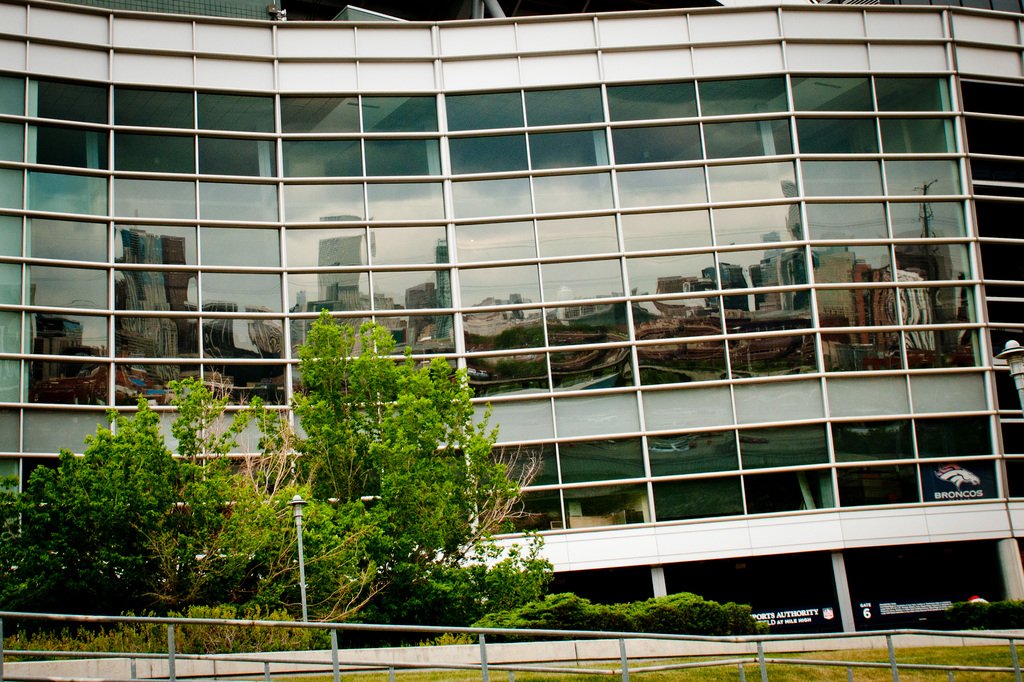 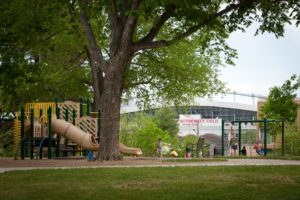 Gazing out at Sports Authority Field from Jefferson Park. Photo by Caitlin Savage

On a hill, nestled amongst trees and sandwiched between the trending LoHi and the Sun Valley Neighborhoods lies the area of Jefferson Park.

Built around a seven-acre park along West 23 Avenue and Clay Street, the Jefferson Park neighborhood is a mellow and to some extent an unheard of part of North Denver. The area doesn’t have many restaurants or businesses yet, but it lies less than a mile away from Sports Authority Field and just West of several Denver attractions along highway I-25.

“The location to downtown is a big draw,” said Andrew Straley, a Jefferson Park resident, who moved to the area because it had an undetected charm.

“We were looking for a neighborhood that was undiscovered but on the bubble of being found,” said Straley, while relaxing with his dog, Moxie, in the park.

In the mid 1990s, development began in the Highlands and along South Speer, which created an influx in the area’s density of downtown workers who wanted to live close to the city without the price. 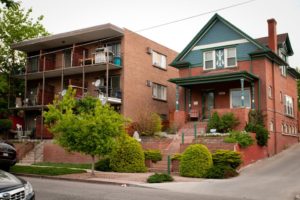 Michael Guiitez, Vice President of the Jefferson Park United Neighbors organization, said the area is perfect for those who want the amenities of urban living while maintaining an affordable home.

Houses with 1920s and 1930s architecture line the streets surrounding the park, and now modern loft and apartment buildings are being built to bookend the North and South sides of the neighborhood and near the stadium to draw in young professionals.

“It [the development] started off as a project, the Better Block Project, where we began to transform an area to what it could be with new businesses and restaurants,” said Guiitez. “Now we’ve got a business district that’s growing, there’s bike trail connectivity to the Platte Trail, and the stadium offers some of the most majestic views of the whole city,” Guiitez said.

Through these two projects, Element 47 and 2785 Speer, the area is expecting to add 700 new doorsteps and increase a growing business district while maintaining the neighborhood’s low-key atmosphere.

“I’m in favor of the development as long as it’s done with improvements to the infrastructure,” said Straley, “We need to accommodate for the influx of people. 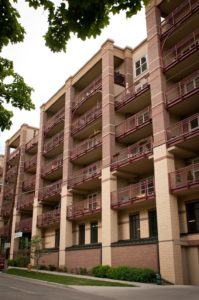 While the opportunity for development increases, the Jefferson Park community centers around the park itself.

“The park is beautiful, and is one of the main reasons why we bought here,” Straley said. “It was, and still is pretty mellow, but a great place to live by.”

Throughout the year, the JPUN organization hosts different events in the park. This summer, they plan to hold a concert series on the fourth Sunday in June, July and August to help build the community while supporting local entertainers.

“The best part about our neighborhood is you can live here, have a yard and walk five to seven minutes and be downtown,” Guiitez said.

Walking around Jefferson Park, you can feel the anticipation of what’s to come for this neighborhood.

Construction sites along I-25 next to brand-new apartment buildings line the borders of this neighborhood, while new restaurants such as Sartos, an Italian eatery and Chili Verde, a pub land style restaurant hope to open by the latter part of this year.

Denver’s skyline as reflected in the windows at Sports Authority Field. Photo by Caitlin Savage

This neighborhood is a quiet, little known part of Denver that has the excitement of some of Denver’s hottest attractions and trending new businesses, while still happening on the edge of it’s own discovery.