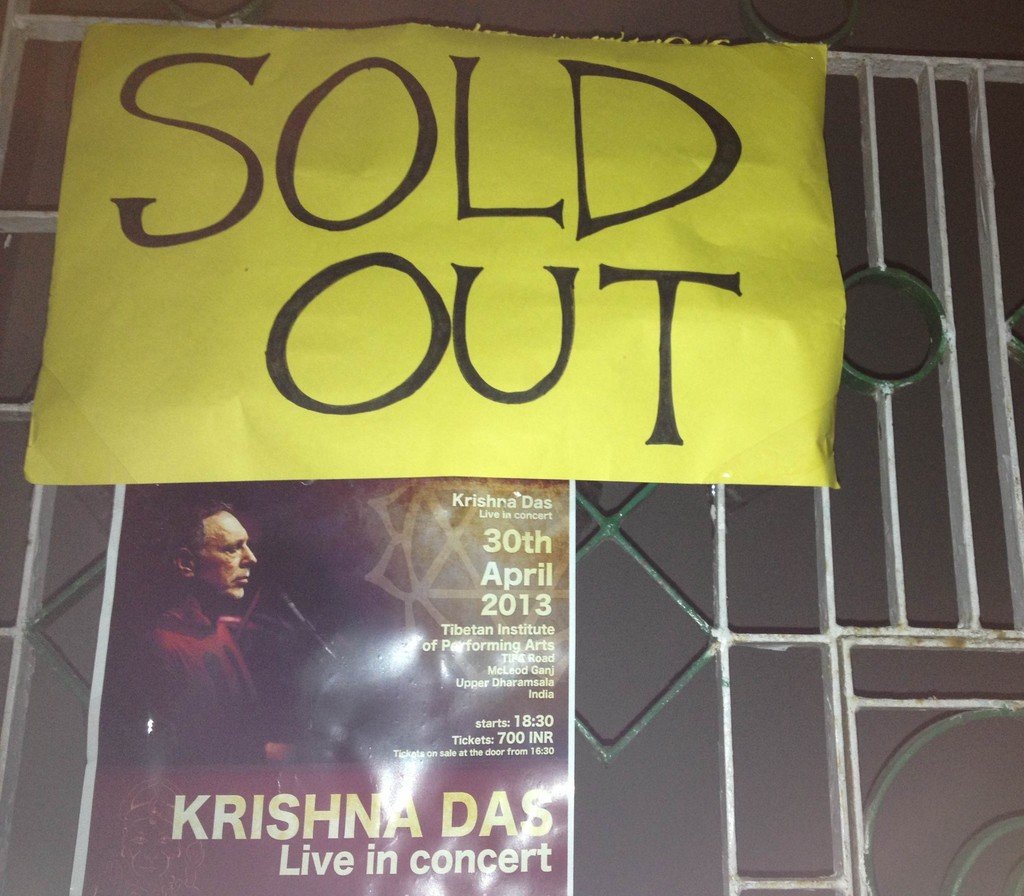 As I’ve previously made clear, heady chanting isn’t exactly the kind of thing I find easy on the ears. When it’s a team of Buddhist monks at a temple in Cambodia and I’m sitting cross legged in the back, getting lost in the monotone rumbling chorus of murmuring words I can’t decipher and I can feel the hum vibrating through the floor and up my spine, well yes, then I find the experience to be extraordinarily moving. When it’s in a yoga class with other Westerners outfitted in baggy, Indian-bought clothing with various visible tattoos of lotus flowers and Om symbols, I’m not so into it. But when this American guy who was a spitting image of a young Dustin Hoffman had told us that Krishna Das was playing a concert this week at the local Tibetan Arts Center, we thought, “What the hell, why not?” But we weren’t so committed as to go purchase tickets in advance however, and wouldja know it: the damn thing sold out. Needless to say, our disappointment was easily pacified by the suggestion of dessert (some of the bakeries around McLeod Ganj are simply outstanding with delicacies ranging from carrot cake- my personal favorite- to crumbly chocolate chip cookies and lemon cheesecake) but we decided to loiter around the premises for a bit before bailing, as there was quite an interesting scene developing.

Not only was this an ideal opportunity to reunite with everyone that we had seen in the past two weeks around town- that blonde guy who sat next to us at lunch yesterday eating the mashed potatoes, our Danish Buddhist friend from the bus ride from Rishikesh, the grungy Israeli crew from the falafel shop, the unusually tall barefoot Irishman with the dreadlocks, the Spanish girl with the nose ring who always has flowers in her hair and a hot air balloon tattoo on her bicep- but it seemed like lots of other folks didn’t have tickets either. As a Penn State graduate, there are few things I appreciate more than a good old fashion tailgate. So we posted up outside on the cement bleachers next to a group of long haired, dark skinned Tibetan musicians and shared a tea and a joint with them while we played a cut throat game of Gin Rummy (our new leather-clad friend preformed some “Tibetan Magic” so that I would win in the end- and it worked!). Some orange dogs curled up at our feet. A group of mismatched ex-pats popped caps off of Kingfisher beers and puffed on cigarettes in the corner. Most of the devout looking fans cozied up in a cluster right outside the venue near the barred windows and a few local round-faced children kicked around a soccer ball, giddy and giggling as they chased it back and forth across the open lot. The sun set and the music began, echoing dully out of the 500 person venue and into our courtyard posse of about fifty stragglers.

And to tell you the truth, for the price of 700 Indian rupees, which translates to about $14 (significantly cheaper than a show at the Fillmore or Red Rocks, yes, but very expensive for anything in India) I was satisfied with our sampling of Krisna Das from the parking lot. He plays the harmonium, which is like an accordion, but not as cool. I would have perhaps been more intrigued if it were the tablas or a sitar, which sound more exotic and less church-campy (the harmonium actually reminds me of that SNL skit with the music teachers).

Born into a Jewish family in Long Island, Jeffrey Kagel (“Krishna Das”) is the “best known US vocalist of kirtan-style music,” the genre of Indian devotional music where one chants the names of Gods… which is probably a pretty tight niche market. He originally traveled to India in the 1970s and studied ancient meditation practices and Bhakti yoga with a Hindu guru and he has put out eight albums since 1996.

But as our downstairs neighbor, an aging Kiwi who has lived in Kathmandu for the past fourteen years, had laughingly warned us, “They probably need to ring a gong at the end of the show to wake everyone up.” Not exactly my cup of tea. But that’s the beauty of tea. There are a million different kinds, one to suit each of us. Krishna Das is like a tepid mug of chamomile with honey, while I prefer a sugary shot of espresso.