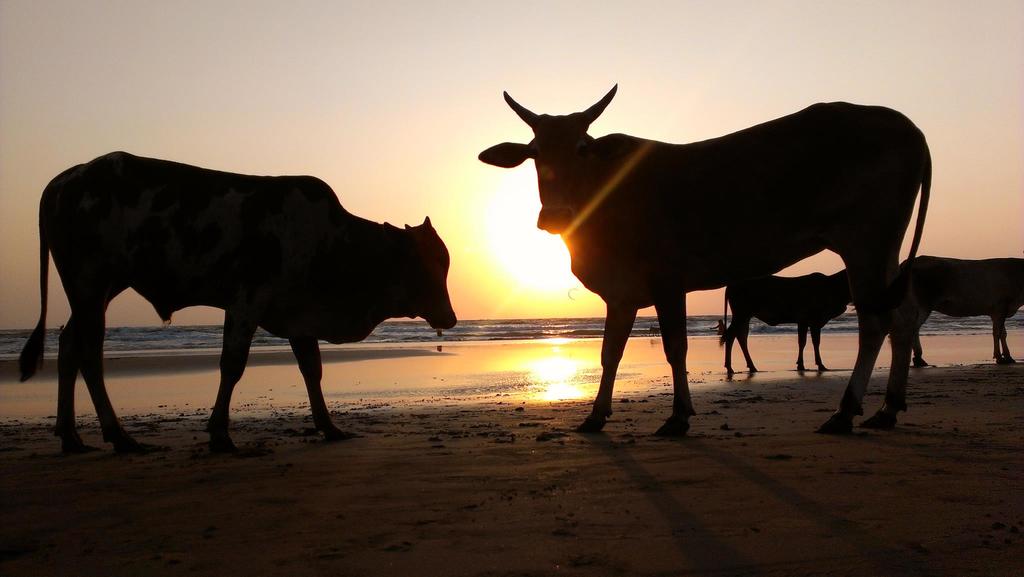 Curryland Chronicles: Burning Down the House 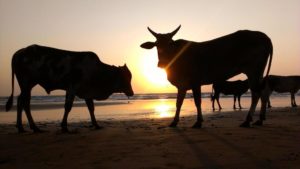 Down the street there is a tiny bakery. There is no sign out front and I am not sure if it even has a name. It is a modest store front with two steps up to get inside. The place is immaculate. There is always at least one pair of sandals out front- sort of like the dollar in the hypothetical tip jar- making sure that others know to follow the subtle example. The white floors gleam and the walls are painted neon green. There is a small display case inside containing the day’s fresh picks with hand written labels: chocolate balls, chocolate forest cake, cheese cake, coconut cookies, and of course, the signature mango pie. Made from fresh mangoes every morning. Where is the kitchen? Right there, covered up behind a black hanging cloth curtain from what appears to be a laundry line that runs from wall to wall. There is one table that sits against the wall with drab table cloth on it and several plastic stools around. The menu offers egg sandwiches on homemade “brown bread” and they serve masala tea in small glass cups without handles. Something we often take for granted at home is the tradition of serving hot beverages in mugs with handles or some sort of heat resistant materials. Here, not only is the tea serving boiling hot, but the cups are often 8-12 oz and plain old glass. So you daintily pick up the cup with your finger tips in the fraction of space between where the top of the tea and the top of the glass barely meet and take baby sips. Or simply wait until the tea cools enough to touch the glass.

The bakery closes tomorrow. The sweet Nepalese girl who is often working there once shared with us her orange with a soft, “Yes, please,” as she held out the slivers of fruit to us. She has become a staple in my day. As I walk by the bakery, I always give her a warm smile and an attempted head wobble and she grins back.

It is a strange thing: the end of the tourist season in Goa. It feels like that summer I stayed at college in between semesters. The crowds cleared out. There were no lines at the grocery store. Some places closed for weeks or months at a time to remodel or simply because there wasn’t enough business to be had. There is something sort of sad about the crowds all fleeing until next year. It is sort of bittersweet, but also like being a part of an exclusive club. The travelers who came to enjoy themselves in a scenic place, not the tourists who came during the peak of the parties and festivals. Either way, I’m definitely going to miss that mango pie. 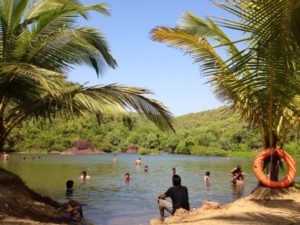 Indian men swimming in the lake on Easter.

But here in Arambol, the bars and restaurants and guest houses that are closing down literally disappear. When returning a day later to the place we had eaten lunch at less than 24 hours ago, all that remains is the bamboo skeleton structure. The floor cushions and tapestries in a pile in the sand, the sign tossed aside, the tables stacked haphazardly, no one in sight. Recently, when trying to return to a local eatery for a cup of tea, we walked up the road and back, confused. Had we passed the place? Surely not. Upon retracing our steps back up the street, we realized that the smoldering pile of ashes and debris we hadn’t given a second glance to (assuming it was just another trash fire) were the remains our attempted destination. It’s like the end of Burning Man, once the gigantic art pieces begin to burn down you lose all of your previously noted landmarks and can’t find your way back to camp.

After talking to Raj, the owner of a well-known local coffee house, it was made apparent that every year the businesses disassemble at the end of the tourist season, but before the monsoons come, only to be entirely reconstructed the following year. This made lots of sense all of a sudden, as I remembered trying to find Dylan’s (Raj’s coffee shop) upon our arrival in Arambol and was extraordinarily perplexed to find it located behind a massive yellow guest house, when I could have sworn that last year it sat in front of this place (it’s interior was laid out identical to last year’s configurations). Raj assured me that, yes, this year they had built the cafe behind the guest house, but next year they would be back in front again. 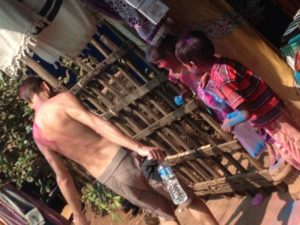 Raj was preparing to make his post-Goa season trek north, as are many of the other Indian and Nepali shop owners and employees. It seems that hardly anyone actually lives in Goa. Our taxi driver friend, Santan, is Goan and proud, boasting of how the local taxi boys often have to band together to “settle” disputes with drunken and unruly Russian boys. Also the local bookshop keeper, Vishwa, is a Goan native who claims to never have been to the north, except for the one time he went to Delhi for a business excursion but he promptly got on a plane and flew straight home after only a few hours. Vishwa claims that Delhi scares him, with “people dressed poorly and on drugs” (the same way the neighborhood near the Indian embassy in the Mission in San Francisco scared me, with its sidewalks swarming with excitable and energetic degenerates, even in the broad daylight). He shook his head and laughed at himself, expressing disbelief that he had wasted the money on a flight so far away only to turn around and come home immediately. “Never again,” he smiles. Other than those few, it seems most of the local workers come and go with the tourists. 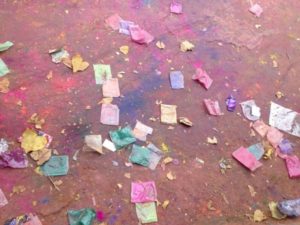 Leftover Holi trash in the street.

The young boys selling the Karma Sutra books and Laxmi statues chatted idly with us one night as my friend shopped in their store. They were disappointed about spending Holi, the Indian color festival and welcoming of spring, in Goa because it isn’t widely celebrated, as Goa is a Christian state and Holi is a Hindi festival. “My father and brother are in Mumbai. Mumbai is very good. Everyone goes crazy in Mumbai for Holi. But here,” he makes a clicking noise with his tongue and shakes his head, “Not so good. But we go home in a few weeks.”

The boys who work at the restaurant at our current guest house are all from Kathmandu. They will be taking the train all the way back there in about another week. It will take them four days and cost approximately twenty US dollars. It seems there are a lot of shop owners and vendors from Nepal that make the trek down to Goa for the season to sell their colorful handmade clothes to tourists then return to their families in Kathmandu in the springtime. It is very profitable seasonal work for them. Living in Summit County for the past several years, I have grown to appreciate seasonal tourism as a handsome way to earn a living and still allow yourself the freedom to travel in between busy times (monsoons in Indian are equal to our “mud season” in mountain-speak). They may grimace in private in regard to the influx of Russian tourists and having to accommodate their lack of communication skills by learning some helpful Russian phrases themselves, but business is business. Love thy gaper. 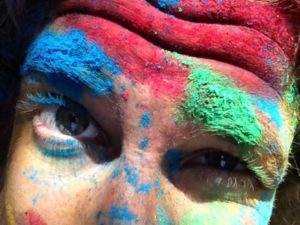 Holi didn’t go entirely unnoticed in Arambol. Yours truly with colored powder caked to my face.

Even the young girls in their patterned saris and sandaled feet who aggressively sell sarongs and anklets have been banished from the beaches by police in khakis and berets, strolling along the sand and toting long sticks. The bright eyed boys and their rattling handfuls of beaded necklaces have since dispersed. So have the even younger boys who sell CDs and DVDs in plastic sleeves. The presence of the youngest of the beach hustler crowd has also faded, to no one’s disappointment: the barefoot urchin children who tug at your pockets demanding your name, quickly string together a bracelet for you with lettered beads, then crudely expect rupees with their outstretched dirty palms face up. Yes, Arambol Beach is a quiet place these days.

So just in the nick of time, before the last business burns to the ground, we too shall head north. If all goes according to plan, a three hour flight from Goa to Delhi followed by an overnight bus for eight hours will deliver us to Rishikesh- the cost of which adds up to ten times as much as the Nepali boys will pay to get all the way to Kathmandu, but ought to take just a quarter of the time. With the Himalayas on the horizon and the last of the seaside sunsets on my doorstep, Northern India beckons with promises of cooler weather, higher altitude, better food, and a visit to the Beatles’ ashram. Obla-de-obla-da!