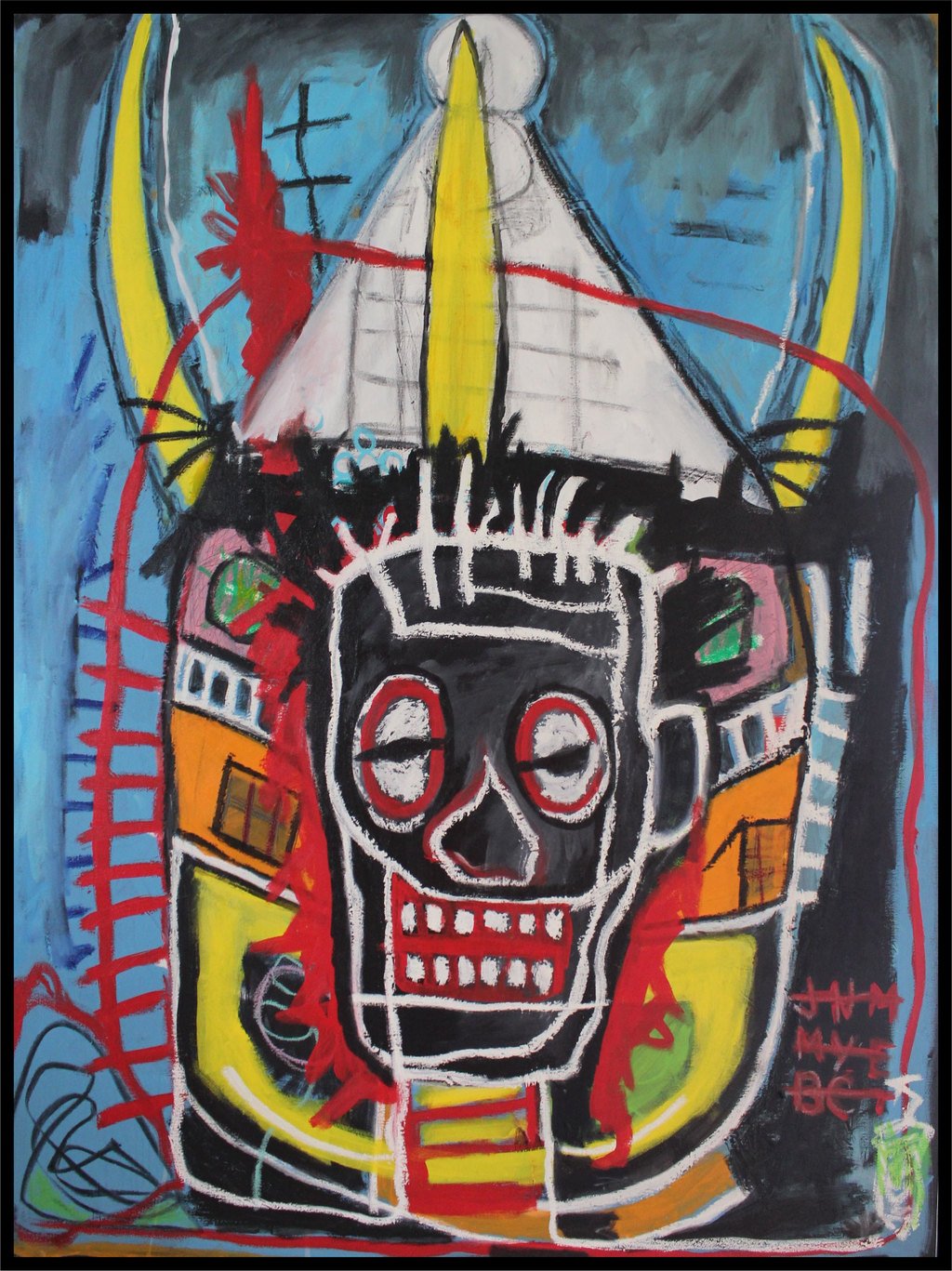 As we plod through our daily lives, we may or may not notice the subtle influences that direct our path. It is those of us with the creative eye that expose and sifts through those influences to create works of art. It is through these daily influences that Robert Davis Garner takes his audience on a vibrant journey of color in his latest works.

Every artist has their own approach to their art. Standing across the room and staring at their canvas until they are inspired is one way. Sometimes it is just seeing a color or pattern repeated. Garner’s process as an artist is one that sees through the daily beat, he creates to his own rhythm and tune. “I have to have music to paint” smiles Garner “I also get inspiration from phrases in music or from the beat” Garner continues “I like to start with an image, mostly heads and proceed to paint over and re-work the image. Taking parts away and adding parts, repeating until, usually there is no longer any part of the original piece visible or maybe a small piece showing through. It is through the many layers that you get a certain depth to the painting. It may look from a distance fairly flat, but once you look closer you see many layers and depth, a lot like people”.

Like most artists Garner was drawn to create at a young age. “I’ve always been a draftsman. Growing up I would draw anything and everything I could. I even sent drawings of Tippy the Turtle that I had drawn from the TV Guide to the Art Instruction School” laughs Garner “I think I was about 8 or 9 years old, but more recently after working for a big five accounting firm, I got a job at Tower Records creating art for them, and that got me back into producing my own art”.

It isn’t unusual for artists through their own creative process of expressing their artistic palette to see the influences of their daily life or the artists they admire to sometimes be reflected in their own work. “Right now I would say Basquiat is my biggest influence, and that may seem obvious, but I find his work the one art that can truly baffle me.  Some pieces I look at and think, really? What a bunch of crap he sold us and we bought it. Then other times I see his work and see the pure, raw, untrained genius. I think I also admire his work because of his work ethic, he produced so much art” smiles Garner “Also watching my kids and their friends paint. My work may be kind of similar in the way they will just cross out things and paint over them. There is something very natural in that for me” Garner continues “My suggestion to other artists is, don’t be afraid to mimic and pay tribute to your influences. Embrace them, take from them and create your own style. Too many times I hear people dis a painting because it looks a lot like so and so, and I say, so what. Is the piece good or not? Just because it may look like such and such shouldn’t subtract from the content of the piece. Does a band get less credit because t it sounds like another band? If so, we would have no music and the same would be true with art”. 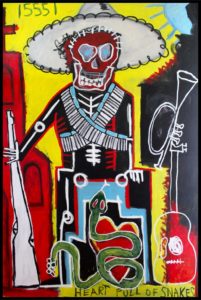 Garner’s philosophy for work, family and life is a simple yet complex approach, just like life. “Right now it is about becoming who you want to be for all three and working each day to become that person” states Garner “It is not being content, but knowing change is coming and embrace it, look forward to it and become the person you see yourself as, but it’s not a day process or weeks, months, but years. Anything worthwhile will never be instantaneous. My art is the same way, I know what kind of painter I want to become, but I am not there. I am a different artist than I was a year ago, for sure, but not who I will be in another year”.

In closing with Garner I asked him if he would like to share any other words of wisdom or keys to his success. “My wife has been key to my success. She has really given me the time and space to create, so big thanks to her” smiles Garner “I hope that people will take from my art what they want. Art to me is so subjective that to each eye there is uniqueness in what people see or feel. A friend once told me that if I paint something I like, then there will be at least one other person in the world who will like it too”.

Robert Garner is an artist with a dynamic expressionistic story that is being told with bold colors using a mixed media, latex paint, oil pastels, oil sticks and a collage approach. He is an artist that I have personally watched grow and metamorphosis into the artist that he is today, but I also know that his wings will give flight to another exhilarating direction.  Thank you Rob.

You may find Robert Davis Garner’s artwork on Facebook at  https://m.facebook.com/?refsrc=http%3A%2F%2Fwww.facebook.com%2F&_rdr#!/RobertDavisGarner?__user=1210519320

Stay tuned for an update on an upcoming Robert Davis Garner Art Show to be announced.