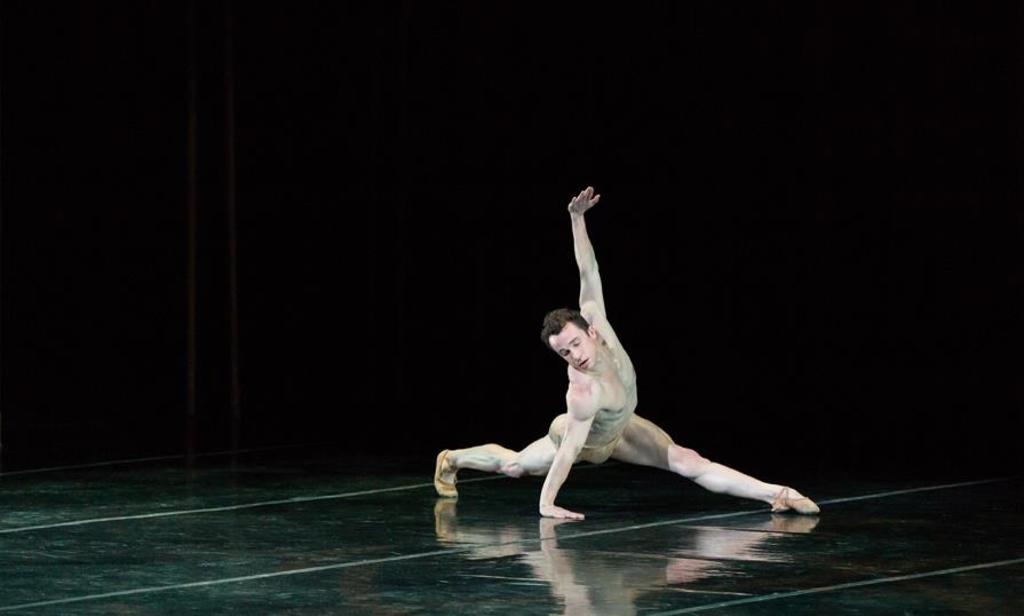 The Athletic Prowess of the Men of Colorado Ballet 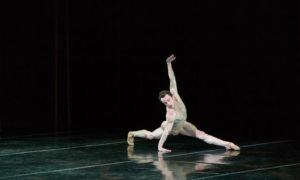 Adam Still as “The Chosen One”
Photo by Mike Watson

Colorado Ballet may have turned a few heads this weekend. Deservedly so.

This year’s spring performance did not follow the typical play-it-safe presentation of a classic work; this time last year the company performed Peter Pan, years prior ballets such as Midsummer Night’s Dream or Romeo and Juliet. In a city like Denver, which is not New York or San Francisco with regards to dance appreciation, the “kid friendly” appeal of ballets is unfortunately a large part of the artistic decisions the company must make when presenting a work to the Mile High community. This is something that’s unspoken – but in 2013, when folks are more likely to stimulate the economy through the purchase of an overpriced NFL ticket, you’ve got to play down to a population who sits idly by while the Colorado Symphony cancels half of their scheduled season to keep their doors open.

But Colorado Ballet didn’t do that this spring. They asked the Denver audience to pull their heads out of their iphones/asses/tutu obsession and observe something real. Ballet Masterworks re-kindled the feelings I had when I spent every free moment at the New York State Theatre watching the Jerome Robbins celebration during the summer of 2008 in NYC. It was a chance for me to view this company fresh faced while providing a stark, ugly realization that I needed – I have all but neglected the men of Colorado Ballet in the nearly 5 years I’ve been watching and reviewing the dancers. And it’s really a shame, because, as anyone who was sitting in the Ellie this past weekend can attest, they are dynamite.

The program started with Balanchine’s Theme and Variations. Although this piece is one of the safest choices Colorado Ballet could have plucked from the extensive Balanchine repertoire, it served as a perfect Overture for the evening, and satiated the frilly, basic needs the audience has for stereotypical ballet. The cast executed the piece beautifully, highlighted by the corps de ballet’s precise petite allegro. The lush purple tutus of the dancers, highlighted by the principle dancer’s pink tutu, left me with the gagging feeling akin to five minutes into eating a slice of triple decker coconut cream cheesecake. Looks delectable. Tastes divine. But so, so sweet. Still, it’s a fine choice to re-introduce a choreographer that influenced American ballet so profoundly that his name should roll off the tongues of the self-proclaimed dance aficionados who interrupt a fairly easy combination with excessive clapping. George Balanchine – the badass who has had a sad 10 year hiatus from utilizing Colorado Ballet’s talents. Now that the obnoxious “there’s an extension, let’s clap for it!” audience members have been introduced to George Balanchine light, I’m looking forward to the full bodied presentations of Apollo, The Prodigal Son, or even The Cage.

The second piece of the program was a world premiere by San Francisco Ballet resident choreographer Val Caniparoli – responsible for a memorable cover of Dance Magazine in the ’90s of Evelyn Cisneros in a long, colorful dress in Lambarena.  It’s hard to present a new work when you’re sandwiched between Balanchine and Nijinsky – sort of like if The String Cheese Incident followed Led Zeppelin but played before The Grateful Dead. It was reminiscent of a standard 1993-contemporary ballet; funky tutus, funky classical music with a twist, funky choreography. You can go ahead and say, “Well, I’d like to see what you’d come up with?!” when I state that I found the piece to be lackluster, because I’m sure anything I’d create would look like dookie. It just didn’t speak to me. However, keeping all of the aforementioned high brow commentary regarding the target audience in mind, it was appropriately placed. Warming the audience up – “Guys. This is what contemporary ballet looks like,” was completely necessary. Last April the company presented world premiers by female choreographers at the Newman Center for the Performing Arts, and it was mind blowing to watch the partnership between choreographer Amy Seiwert and dancer Dana Benton. The fact that Colorado Ballet brings guest choreographers in to make art is cause enough for excitement, and I’ll leave it at that.

Now for the stake to the heart – the last work, the Stravinsky/Nijinsky 1913 partnership – The Rite of Spring. This is the first time Colorado Ballet has left me feeling the way Ballet Nouveau Colorado does when I write about them; working through my loss for words. The sets and nude-looking-costumes put the audience in the right frame of mind -you’re about to get rocked. Rite of Spring nearly caused riots when it debuted in Paris; with it’s raw energy, sexual tension and blatant display of the curiosity of human physiology, this piece calls forth a different animal from both the dancers and the audience. You can’t just lull through it, smiling and nodding, while the dancers do multiple pirouettes, keeping a tiara perfectly bobby pinned into place. You’ve got to bear through the embodiment of grunting, sweating humanity, with a ballet that has a plot line based on a pagan sacrificial ritual thought to transition winter into spring. First performed 100 years ago, Rite of Spring opens on a robust young man – “The Chosen One.” With undulating movement Adam Still was nothing short of ethereal in his portrayal, displaying fluid masculinity through every port de bras and tour. Kevin Gaël Thomas and Sean Omandam executed a flawless jete sequence before the rest of the male Celebrants joined, with the Ellie Caulkins Opera house stage swelling in a sinewy Y chromosome chorus. You have to pay attention to the male corps de ballet of the company during this scene – they are the only dancers on stage, and they are hardly clothed. Every inch of muscle fiber visible, the men of Colorado Ballet were stripped of their partnering duties, tights, and Coda combinations and allowed to (literally) fly. There are few pieces that come to mind with choreography that demonstrates the power of the male body as formed by classical ballet training as Rite of Spring. But it’s not just the choreography; the men were feeling it, always in synch, owning every minute. It was a sight to behold.

The female celebrants are beautiful, as well – Casey Dalton and Caitlin Valentine-Ellis were gorgeous – but Maria Mosina was hardly recognizable in her role as Earth Mother. From her writhing facial expressions to her impeccable timing, I could hardly take my eyes off of her. Her stage presence was an incredible mixture of soft, feminine movements, spliced with masculine postures and a flawless pas de deux. She transformed into an earthy creature, capable of creating, destroying, seducing. The change in the audience’s demeanor was noticeable, with a shift towards the silent. It was impossible not to be awestruck after watching Rite of Spring, and rightfully so. Classical ballet is full of masking – the work, the sweat, the bloody feet, the power of a dancer’s body under pink tights. Rite of Spring not only removes those components, it celebrates their removal. The score, the movement, the Colorado Ballet giving a charge to the audience, waking Denver up to coastal repertoire.  These works are important to keep alive, and a company the size and strength of Colorado Ballet is the only dance company in the state that can do it. All of the above are more than enough reasons to catch the last weekend of Ballet Masterworks at the Ellie Caulkins Opera House in the Denver Performing Arts Complex. Colorado Ballet is gracing Denver with an opportunity to show what they can really do, without Romeo or Prince Charming.