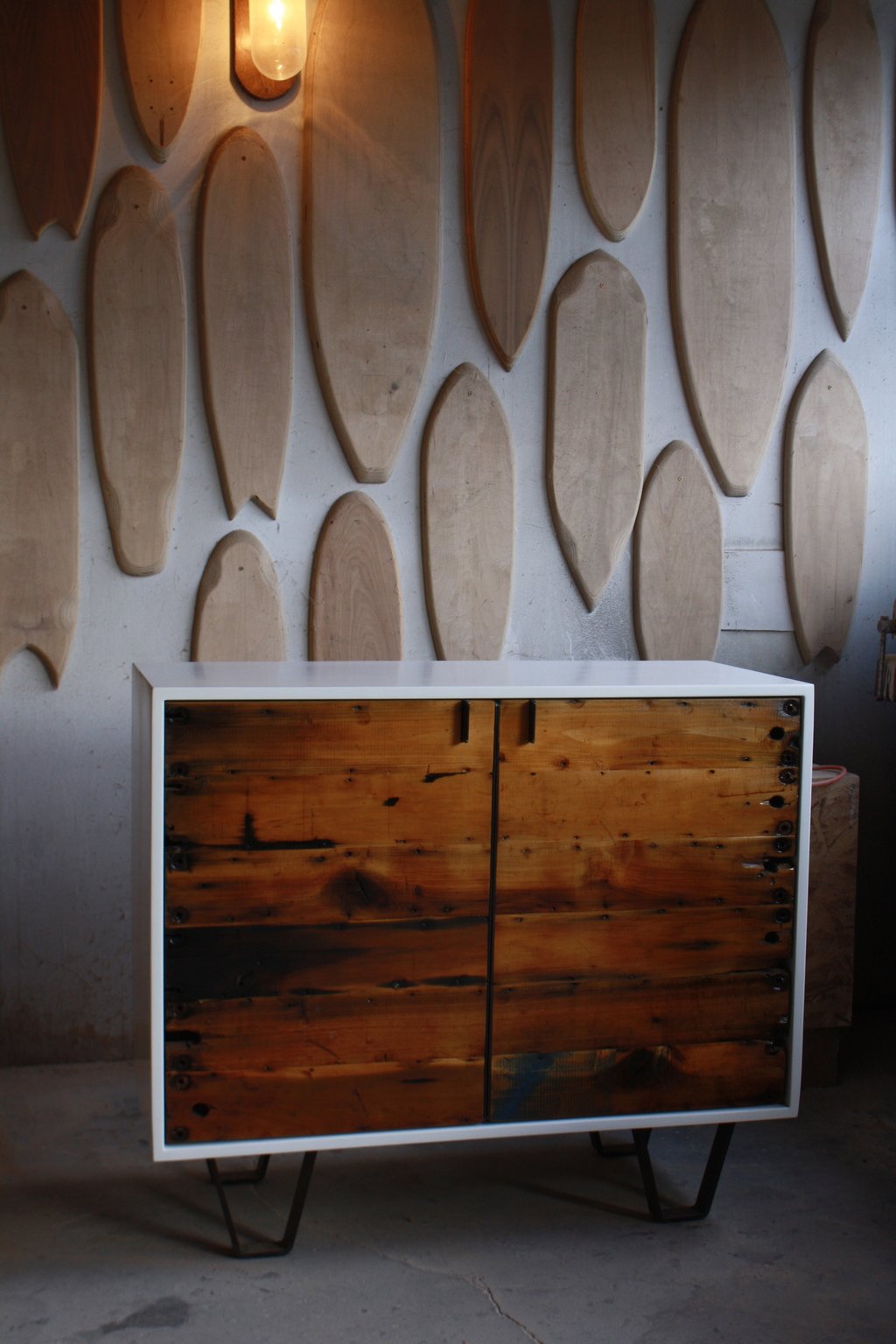 Settled in Denver’s historic Baker neighborhood is a 1940s-era automotive repair shop where Denverites once brought their Alfa Romeos for a tune up; today, it is still a site for the blood, sweat and tears of manual labor, albeit the oil and grease has been substituted for sawdust.

Here at Fin Art (185 W. Bayaud Ave.), the intrinsic value of working with one’s hands is alive and well.

“We run a very old company,” McGowan said. “We’ve always been about the organic growth … everything that we’ve done, we’ve grown by our means. We appreciate that within friendships and within business alike. We’re not trying to take over the world or anything.”

Yet, by merging salvaged materials with a minimalist aesthetic in furniture design, Fin Art has built a thriving local business.

Fin Art’s current catalog features designs for the home: dining tables, credenzas, dressers and the like, with a seating catalog in the works, although their bread and butter is commissioned work around town for local restaurants, bars, and even hair salons.

Nevertheless, they still make time to get together on a Saturday, throw back a couple of Pabst Blue Ribbons and bring their most outlandish design reveries to life just as they did for fun before the business. 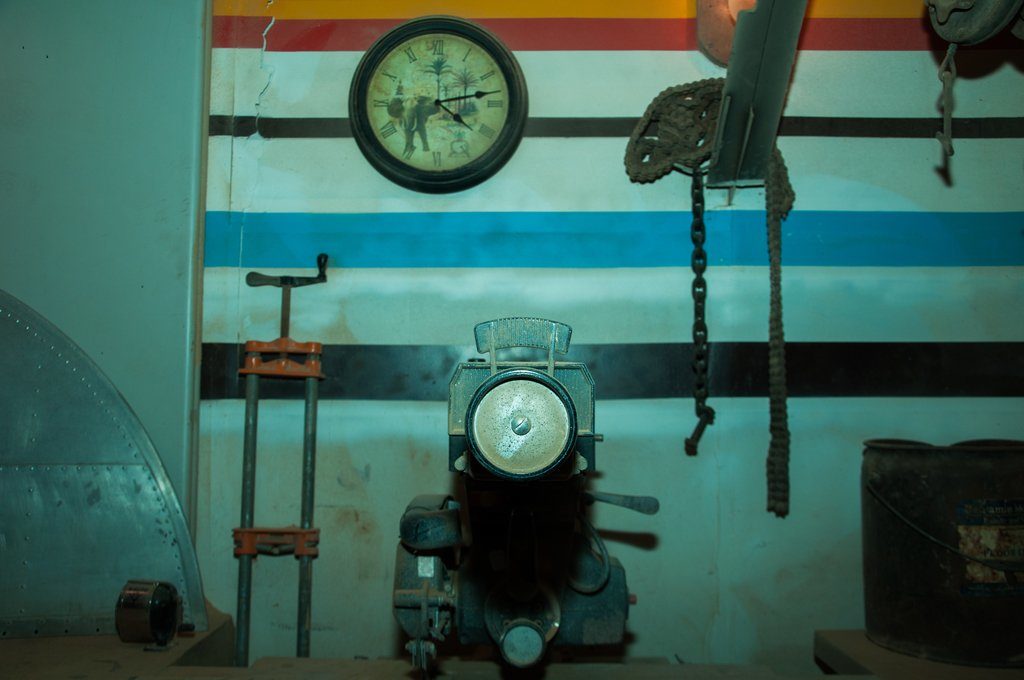 Beauty from “dinosaurs” of machines
Photo By Eric S. Goitia

Childhood friends, Olson and McGowan, always knew they were going to go into business together. They played with the idea of a pizza joint, a T-shirt business, a sandwich shop and a band called White Hot Heat Machine (insert their laughter here).

However, these days they find themselves playing with “dinosaurs” of machines, versus playing music, and it all began with a coffee table.

Olson and McGowan were not willing to settle for mediocre design or the slapdash smorgasbord of hand-me-downs so typical of post-college interiors. The two appreciated modern, industrial design, but were not thrilled with the overpriced options available. That is when the two went to work building in their own backyard.

With no formal training (McGowan studied history in college, Olson communications), the two entrepreneurs became “random furniture makers,” as they like to say, overnight.

The coffee table was a success, although it had the appearance of a surfboard … but, no matter, McGowan still proudly displays it in his home.

A sofa was their next endeavor, and through it they learned the first rule of thumb of furniture design … make sure it fits through the door! 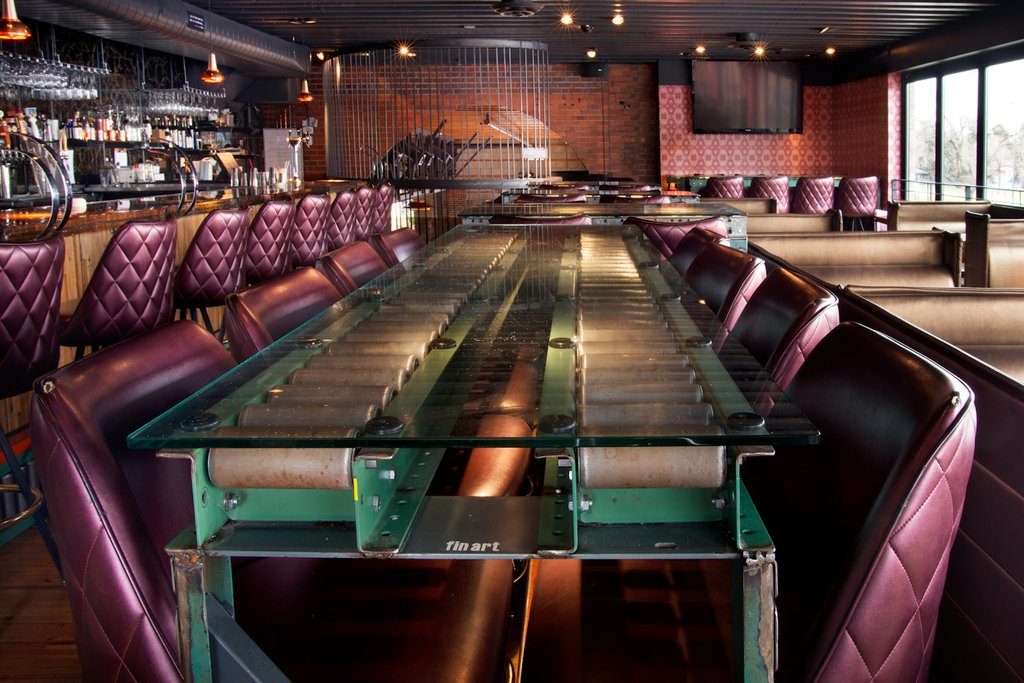 Today they laugh about their humble beginnings, like when they had to Google what a radial arm saw was after someone had donated it to them.

“A million mistakes” later, the duo has come to embody their mishaps and as McGowan said, “We got over ourselves” and let go of the demand for 100 percent authentic craftsmanship; they eventually decided electric tools were not criminal.

Building project requests quickly grew from family and friends. Three garage locations and a graveyard of retired designs later, the duo found themselves here at the corner of Bayaud and Cherokee with a self-sufficient, full-time business where work does not feel like work at all.

Current mass produced furniture has left something(s) to be desired – quality, character, timelessness – and Fin Art tries to reclaim some of what has been lost.

The imperfections inherent in each piece are what end up making them incidentally beautiful.

“We’re not trying to be a ‘green’ company, we’re just a real company.” 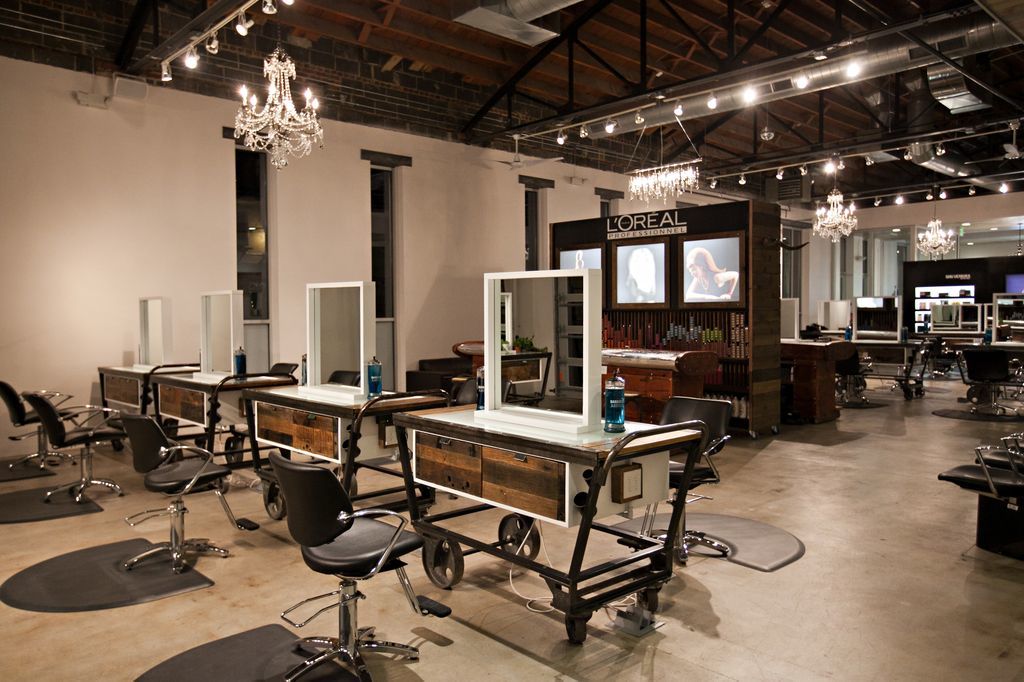 Whether it is the black holes dotting a wooden table from its 20th century rusted square nails, the bleached-blonde shade wood porch beams get from being exposed to the elements, or the natural distress of mahogany boxcar planks made available through the decommissioning of the railroad car, the materials Fin Art selects are chosen for their personalities and out of nostalgia.

After the materials are selected the creative process begins, and this is where three brains prove better than one. 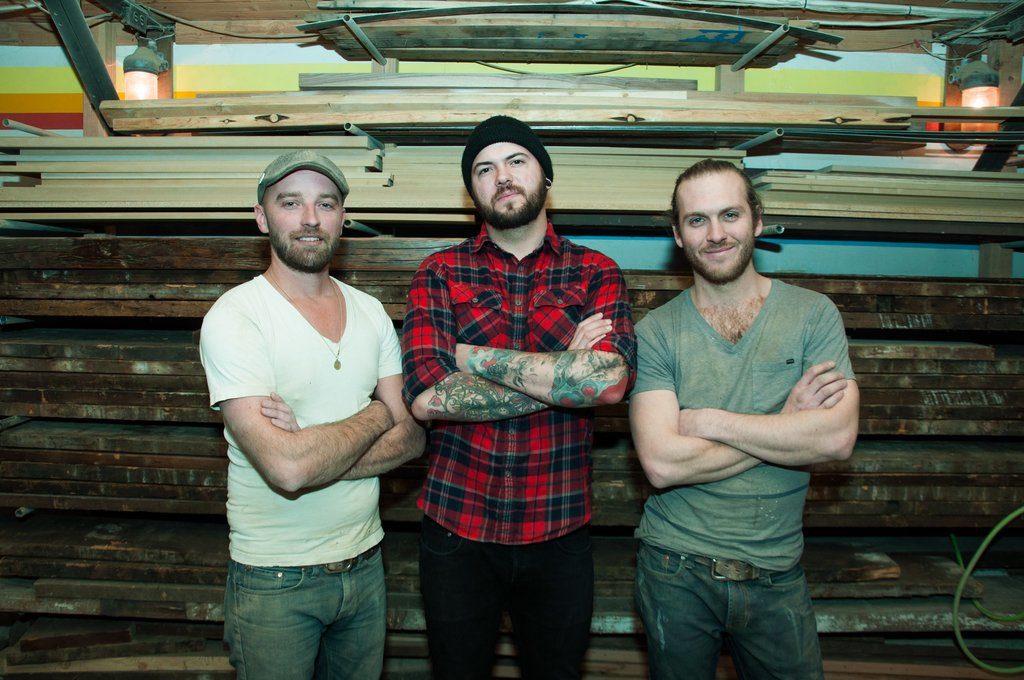 Trio of artisans that make up Fin Art
Photo By Eric S. Goitia

Next, the team gets to work – literally. The team does the manual labor themselves for days on end sometimes.

“It’s really rewarding,” Clarke said. “Even though we do sand for a whole week, the next week we have an awesome product.”

Not to mention Fin Art can make a bespoke piece for the same price as something mass-produced.

“We’re less expensive than things you could find at the mall that are made in Malaysia, and that makes me feel good that we can do that,” McGowan said.

Despite their success, the three artisans remain down-to-earth, sticking to their roots of crafting and selling locally and not taking themselves too seriously.

“See, you realize at the end of the day, we’re building furniture, it’s not like we’re operating on anybody,” Olson said.