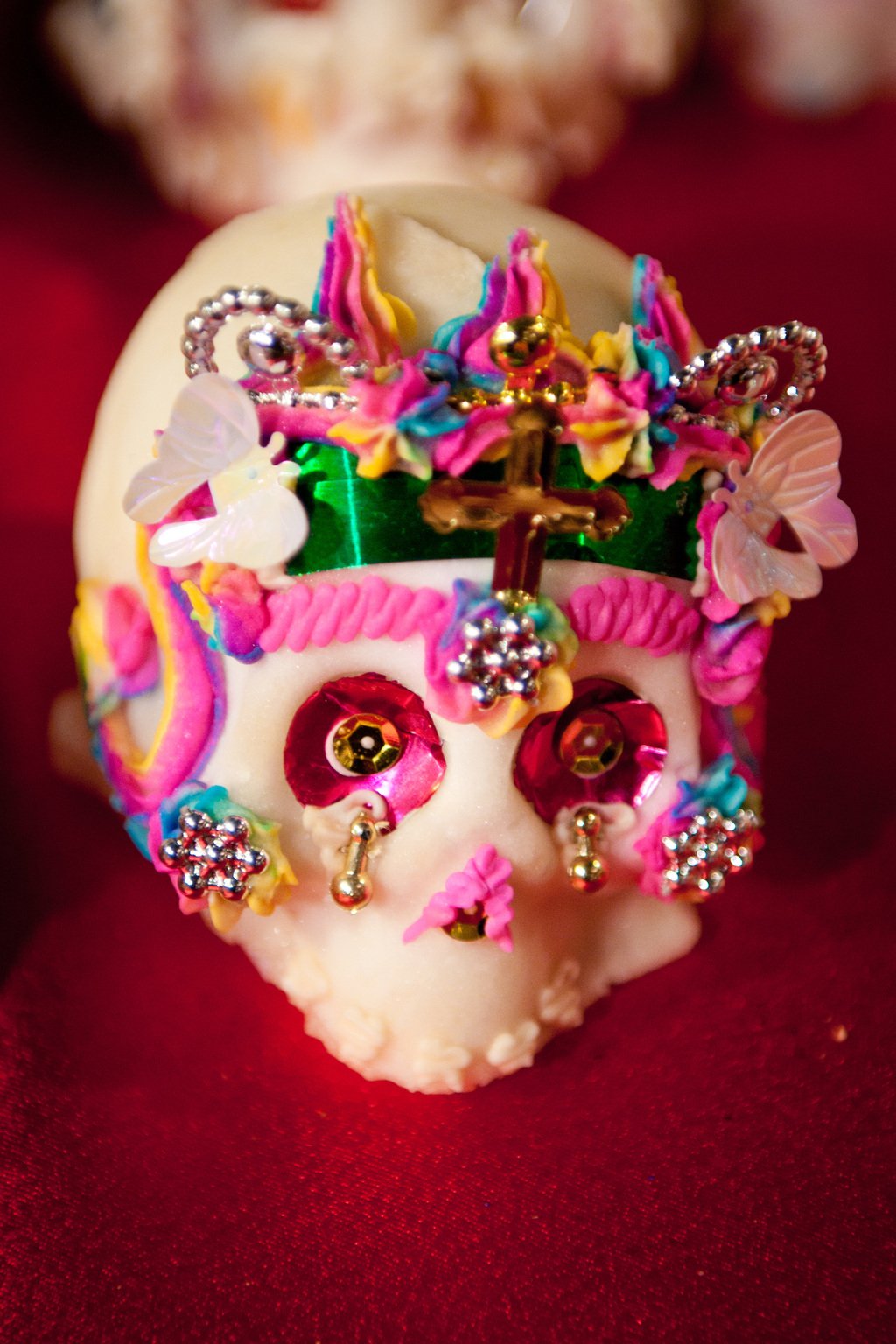 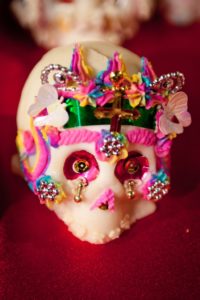 A sugar skull at the imitation market at Longmont Museum. Photographer Caitlin Savage

It’s that time of year again when we plan our escape. Our escape from our every day, a time when everyone gets to shed their identity for one night and play dress up. Our Halloween is about fantasy and fun. A much needed vacation from our lives and one of my favorite holidays. However beside this necessary indulgence, the holiday has lost a majority of its meaning. Instead of using this time to pay our respects to the dead, we solely imitate them, furthering the distance between us and our dearly departed. This is far from the practices of Dia de Los Muertos, also known as The Day of The Dead for us gringos. Rather November 1st is dedicated to those who have passed on. It is not only celebrated in Mexico but has variations throughout the world. So why not us? Why have we forgotten to remember our deceased and decided to dress up instead? Is it just not important? Or is it just weird? I would say none of the above, rather I would argue it is extremely important and something we should become accustomed to. So here are a few reasons and ways you should and can explore this increasingly popular holiday…

When someone dies in our culture we have a funeral, a wake, and maybe a vigil. We give ourselves a short time to mourn and grieve the loss of our loved ones and sometimes we even find space to celebrate their lives. But 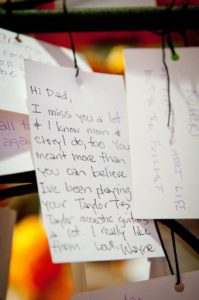 A curtain of heartfelt notes to loved ones drape an arch way at the Longmont museum Photographer: Caitlin Savage

after the immediate shock wears off we are expected to move on and go our separate ways. There is no distinct time to celebrate communally or to even openly grieve after this initial period. Rather it is pushed to the side and publicly forgotten about. If you have ever lost someone close to you, you know this can be very disillusioning. Because our culture doesn’t have a space for the ones we’ve lost in our lives, even though they are ever present in our mind. I know this was particularly hard for me after losing my mother who was and still is the biggest influence in my life. Moving on is just not an option, so carving out space is necessary to heal properly and feel connected to your loved one. But it can be hard when there is no set room. You might not know how or where or when to do it, especially when it brings up a lot painful and difficult emotions. This is one reason I wanted to check out Dia de Los Muertos to get an idea of how other cultures do it in here in Colorado. 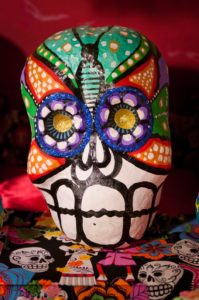 Do: You probably on some level recognize the images of Dia de Los Muertos. The graphic black and white skulls vibrantly painted with flowers and designs or laughing skeletons dressed up in clothes dancing and acting like the living. The contrast of this symbol of death paired with color and life is what makes this holiday so recognizable. People are constantly adopting it into their art, makeup and even tattoos. But this beautiful aesthetic design has a much deeper meaning.  That is why I made a mad dash up to Longmont Museum to visit the city’s exhibit on the holiday. When I walked in I was taken aback by the burst of color that exuded from every inch of the space. It was a beautiful imitation market filled with mini sugar skulls, dancing skeletons, marigolds (the traditional flower of the dead in Mexico) and several exquisitely decorated alters that people in the community created for their loved ones . It was quite impressive and overwhelming. I found myself exploring every inch of the exhibit and easily lost track of time until a young Latin looking woman introduced herself.

Jill Orr is the curator of the exhibit and head of the education department for the museum. She and I spent the rest of my visit discussing the exhibit and importance of the holiday.  She told me that the beautiful visuals of the holiday seek to symbolize their belief that death is not the end, rather the next chapter in our eternal journey.  The colors and

liveliness in this holiday makes death a celebration of the loved one’s life and not just a mourning. It also tries to normalize dying by making it more approachable, especially for the little ones. She explained the dancing skeletons and sugar skulls attempt to minimize death’s morbid implications and even tries to poke fun at it. Because they readily accept that everyone will die and instead of
fearing it they embrace it and the journey it will bring. That is one reason why on October 27th they are hosting their 12th annual celebration for the holiday. There will be food made by local restaurant and their Latin community as well as music and sugar skull decorating. It is a great time to explore the exhibit and join in festivities and find out what this holiday is all about.

One of the altars at Longmont Museum. Photographer Caitlin Savage

for their celebration of the holiday or visit several art galleries on Santa Fe that display Dia de Los Muertos art. If anything you can enjoy the ornate and graphic nature of this holiday and maybe catch a glimpse of why and how other people in different parts of the world deal with death and dying.