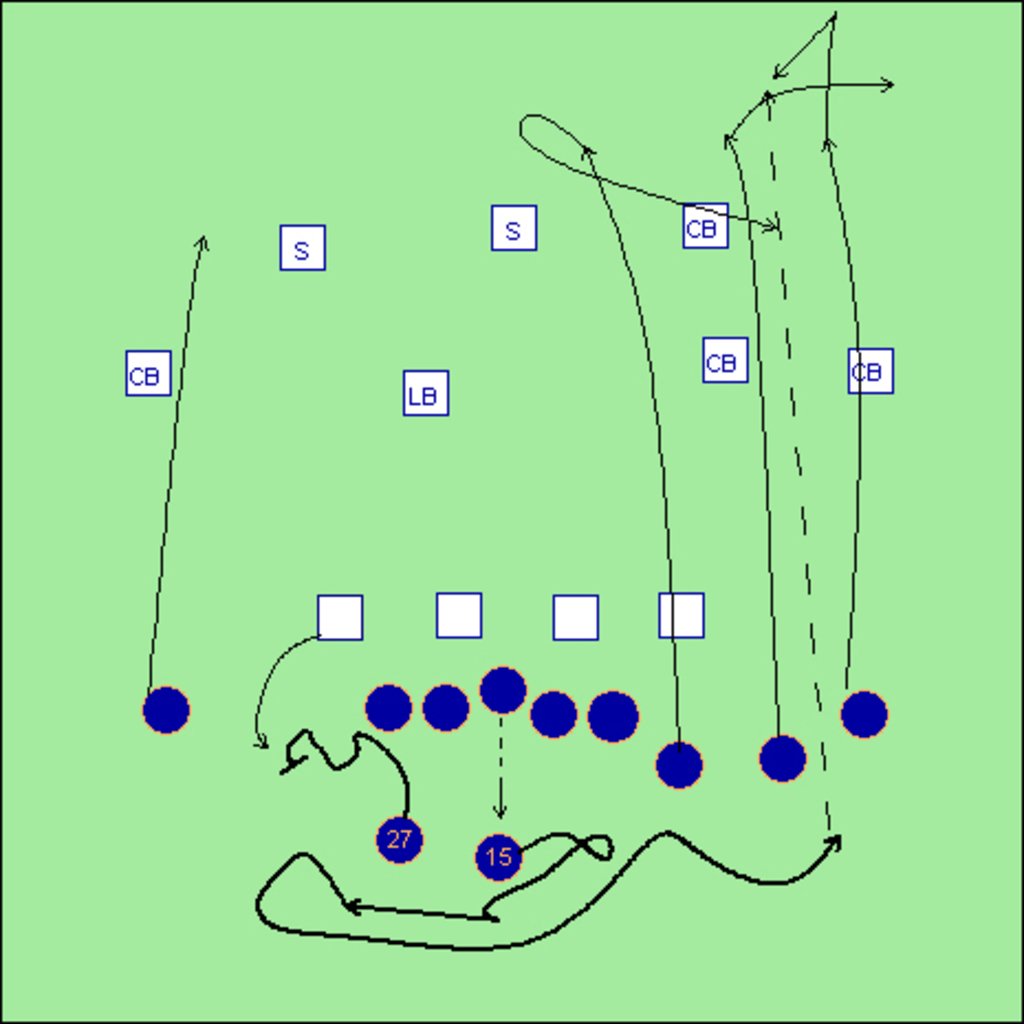 Taking a Knee with 303: Mike Tanier

Hunter S. Thompson was a passionate football fan. But so was his arch-nemesis, Richard Nixon.  Jack Kerouac played college ball at Columbia before getting injured and becoming a writer. You will overhear discussions about football at the Republican National Convention as well as at Burning Man. Girls like it and boys like it. I can imagine somebody in the NRA sitting on the bar stool next to a PETA member and having a good time watching a game, not knowing or caring that they could disagree so violently on other issues. In football I see the potential to bring people together.

For this column, Taking a Knee with 303, I wanted to reach out to people you may have heard of from non-athletic fields, and ask them a few questions about football, and other sports as well, because you can make a friend at Coors Field just as easily as you can at the Pepsi Center.

This week I spoke with Mike Tanier, an ex-high school math teacher, co-author of Pro Football Prospectus from 2005-08 and the Football Outsiders Almanac from 2009-12. He is currently a staff writer at Sports on Earth (http://www.sportsonearth.com/). A lifelong Philadelphia Eagles fan, he is also the author of “The Philly Fan’s Code,” a countdown of 50 of the greatest athletes Philly spots fans love to hate.

Thanks again for speaking with me. You had a career teaching high school math before you started writing about football. What would a high school math teacher from New Jersey enjoy about the NFL? What made you want to write about it?

Football was an obsession of mine going back to early childhood. I started watching the NFL intently when I was six or seven years old, and I would watch college football all day Saturday if my parents or grandparents didn’t kick me outside to play football with my buddies.

What it boils down to is that “blogging” became a hobby about a decade ago, and a few hundred thousand people like me decided to become sports bloggers. That’s when the cliché spawned about the dude in his basement in his pajamas, when really it should have been a dude (or woman) with a professional job who is dying for a chance to be a little creative and invest his mind and heart into a pastime. That’s who most of the bloggers who went pro were. That’s who I was.

Your writing is known for humor as well as actual football content. Could you tell me about the funniest story you’ve covered?

The funniest events are the ones which are unintentionally funny. The NFL Players Association scheduled a “meet the rookies” event the day after the 2011 draft, during the NFL lockout. Well, the lockout was lifted hours before the event, so all the rookies rushed to their team headquarters after the draft, because they wanted their playbooks and (probably) wanted to distance themselves from the NFLPA at that moment. All the beat writers went to the mattresses too, so that left about a dozen of us sitting in a hotel conference room as the event organizers desperately searched for people willing to take the podium.

Brad Wolff, the teenaged wunderkind blogger, sat next to me rattling off updates from Twitter: “This rookie says he is at the airport. That one said he is leaving New York on the next train.” Meanwhile, we listened to Muzak and stared at an empty podium. The best part is: the lockout was re-imposed a few hours later, so the whole exercise was moot.

The NFL tries so hard to be hyper-professional now that lots of ironic, awkward comedy seeps out the edges: coaches who fine players for saying anything, innocent remarks blown into scandals, and so on. When the whole sports media is in a serious tizzy about what some Jets cornerback said, it’s my job to show how much funnier the tizzy is than the statement.

What about the most interesting, from a more serious football perspective?

I once got to sit with Ron Jaworski, Greg Cosell, and Aaron Schatz of Football Outsiders as former Redskins and Texans general manager Charley Casserly broke down the responsibilities of a GM on a day-to-day and almost hour-to-hour basis. I am fascinated by the divide between the fan’s perception of what a team executive does (sits with a cigar, his feet on the desk, shouting “starting quarterback for two #1 picks” into a headset) and what executives actually do (process scouting reports, coordinate meetings between coaches and scouts, conduct workouts and interviews for players to fill out the practice squad). That may not be as interesting as the Wildcat offense or a quarterback throwing for 500 yards in a game, but I find it fascinatingly mundane, and it informs my opinions on how teams build and prepare for a season. 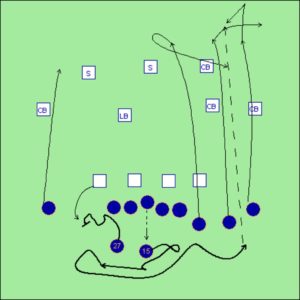 Fig.1 Mike proudly lists 2005 on his resume as the year he got play diagramming software. In this play, Tim Tebow (still with the Broncos) takes a shotgun snap and gets one (or more) blocks from Willis McGahee (27) before scrambling on an implausibly circuitous route through the backfield, before throwing the ball presumably to one of his receivers.

DeSean Jackson fields a punt on his own goal line and runs up field at 15 mph. Giants punter Steve Weatherford is running down field toward him at 7.5 mph from his own 38. Where does Jackson get tackled?

Well, Michael rushed for 70 yards, LeSean 170. Let me establish that I have not forgotten how to solve this problem, to myself if no one else. (x + 100 + x = 240). Anyway, if LeSean McCoy rushes for 170 yards, it means that Andy Reid no longer has any control over the Eagles offense. So we are in the future, when Rob Chudzinski is the Eagles head coach. Coach Chud learned how to make scrambling quarterbacks great by coaching Cam Newton, and he likes to call quarterback keepers at the goal line. So Michael had two rushing touchdowns to LeSean’s one, plus a bomb for a touchdown, so he had the better fantasy performance. Also, the Eagles lost.

Do you spend your fall Sundays at a sports bar with a TV for every game, or do you prefer to watch at home? How many games can you really pay attention to at once?

Nothing beats the sports bar for Sunday early games, because unless I am on assignment for one specific team, I need to see several story lines play out for what I do. I can focus on three games simultaneously and have a very confident handle on exactly what happened in those games. Any other games, I can only keep track of highlights, injuries, and other key events. It took a few years to figure this out: years ago, I tried to keep track of six or seven games at once and ended up knowing less than I would have if I had just watched the “game breaks.”

When there are only one or two games on, I prefer to be at home with taping and rewinding capability. I prefer that even to the press box, really.

Seriously, though… they are more prepared to face Claiborne, a rookie cornerback who has had almost no training camp. Their strategy consists of having DeSean run past him. They had better start preparing for Griffin, though.

What do you like to read, when you’re reading about football? What writers or books have contributed the most to your love or understanding of the game?

I read Peter King. I read the Football Outsiders guys, past and future: Andy Benoit and Ben Muth and others at FO, Doug Farrar and others who are now at Yahoo or other outlets. When it comes to books, I like to read histories, like The Big Scrum by John J. Miller.

I only skim the major blogs to make sure I don’t miss any stories. I honestly don’t care about the spin that’s applied by most of the successful bloggers; I can almost hear them laboring to form a provocative opinion during the 20 minutes they have to write their posts as I read them. I have to steer clear of most other people who do sports humor because I don’t want to steal a gag. There really isn’t a lot of interesting pleasure reading on the NFL, so I try to fill that niche.

Who’s going to win the NFC East this year?

It’s always a tortoise-and-hares race among the Giants (tortoise), Cowboys and Eagles. I think the Eagles pull it out this year, then have one of their team-wide blue screen crashes as soon as the playoffs arrive.

Mike Tanier is a staff writer at Sports on Earth. You can find his articles at http://www.sportsonearth.com/writer/mike_tanier and follow him on twitter @MikeTanier

Pete is a Redskins fan living in Bronco country. He’s co-founder of the Team Tomorrow ski and snowboard team, and a guy at the bar last Sunday told him “you know a lot about football for a weirdo.” He is HEAD writer for the Warren Peace NFL Report. Follow Pete on twitter @TakingaKnee303