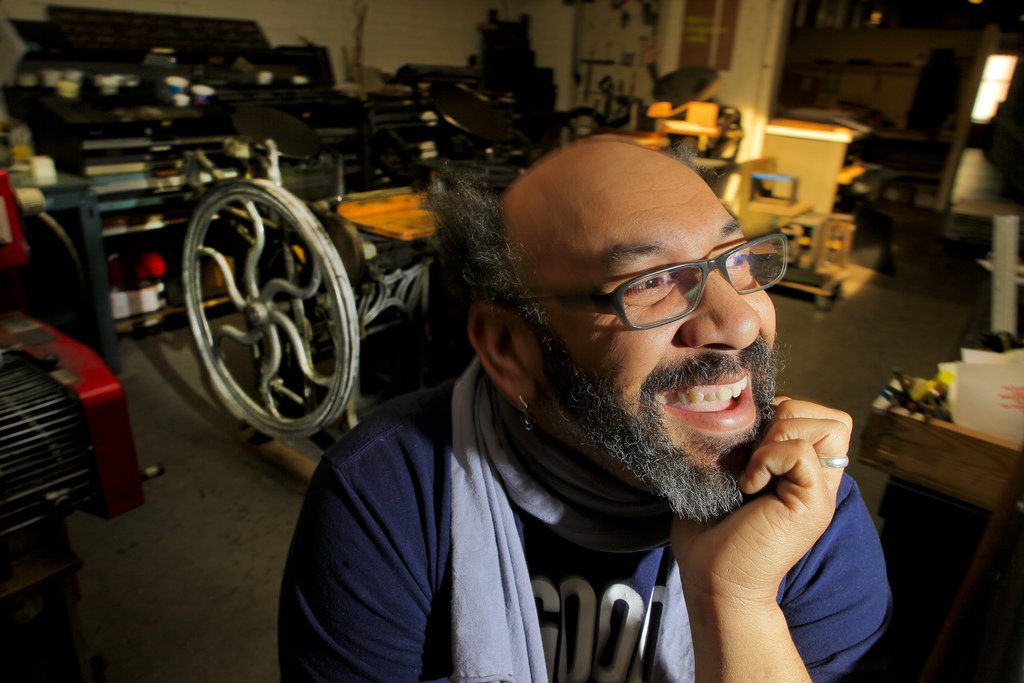 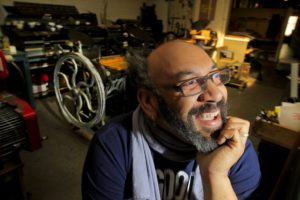 Photo courtesy of Denver Art Museum. Photo by Barry Gutierrez. MATTER founder Rick Griffith shows off a few of the many wood type forms used at the graphic design studio.

Have you ever felt dumb talking to someone? Not dumb because you couldn’t follow their train of thought or the content of the conversation, but dumb because you knew that the person with whom you were speaking was so far out of your intellectual league? That’s what it’s like to speak to typographer Rick Griffith from MATTER graphic design.

Griffith sits down at a table, ready for his interview, with a small, wooden, three-dimensional “M” that can be taken apart or put back together like a puzzle. He immediately launches into some kind of explanation, but his rapid-fire speech and design know-how make the conversation decidedly one-sided.

Griffith’s MATTER studio will be featured as part of the Denver Art Museum’s “Design Lab: Three Studios” exhibit opening on July 27. MATTER, DoubleButter and tres birds workshop are all being recognized for their work in alternative design strategies and will provide insight into the process of idea conception to final product. 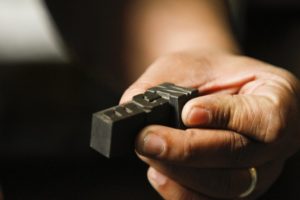 Photo courtesy of Denver Art Museum. Photo by Barry Gutierrez. MATTER founder Rick Griffith shows off a few of the many wood type forms used at the graphic design studio.

communication,” Griffith says. “The power and impact of design is lost on many people. They don’t understand the process and thought that goes into these types of communications. Our role is to unpack and unveil a certain aspect of what design is in the practice of it.”

Griffith is not particularly tall, and his bushy beard seems to grow all the way up and out the top of his otherwise bald head so that there are tuffs of hair sticking straight up toward the ceiling. He looks every inch the eccentric genius, and he has the book collection to prove it. Works by Bertrand Russell, David Hume, Michel Foucault and Jean-Paul Sartre line the shelves, and now the work table, as Griffith plucks his favorites and spews them forth.

Coming from Griffith, it doesn’t even sound pretentious. They probably really do have some deep, impossible-to-understand, metaphysical relationship.

He’s back at his computer now, complaining about the software, when he suddenly yells out that something on his computer is taking a big sh*t. Yup. Eccentric genius, personified.

But back to the “M.” Griffith explains that this is just a prototype and that the real thing will be a desk where he and his colleagues will sit at the museum. In fact, they will available “to introduce the idea of time being a thought product,” he says. “For $2.49 a minute you can book time with us to have a casual conversation, for our best critique of a product, to invent something, to draw something, etc. We look at time as an essential module that we monetize.”

And while he’s obviously enthralled with his design project for the Denver Art Museum, it’s the art of communication that has his heart. 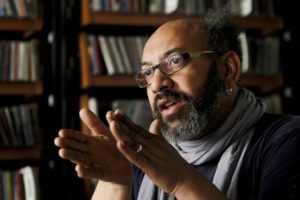 “In so much that typography is the currency of communication design, what I typically do is approach language from a purist perspective. Purist is not designed to be overtly serious, but there is a kind of purity that can happen when you use less words and [more] intentionally.”

See? He’s smart. He’s on some unreachable philosophical plane out-smarting Foucault at chess while the rest of us are still clamoring to get to the table. You can practically hear the whirring sound from the wheels turning in his oh-so-brilliant mind.

The downstairs of Griffith’s studio is full of old, working printing presses. His dog, a red heeler named Pica (as in 1/6 of an inch) follows him everywhere, and in this particular case, eats a napkin off the floor. (“He’s a napkin freak,” Griffith says.)

Griffith is positive and energetic in his beliefs. He clearly loves what he does, and his studio (faulty computers and brainy books aside) seems a perfect haven away from the technological, fast-paced world lurking outside.

It’ll cost you $2.49 a minute to pick his brilliant brain come July 27, but for today, the pleasure of Griffith’s company has been entirely free.

“It’s my sincere hope to elevate the way that people interact with designers and to elevate the perspective of design in general…to grant people a sense of how big, important and, in some sense, how difficult it is to do well,” he says.

If all designers were like Griffith, we’d gladly sit around with them all day. But since they’re not, and since Griffith is a one-of-a-kind, teddy bear of a designer, we’ll be saving our change and getting in line at the museum to talk to him again.