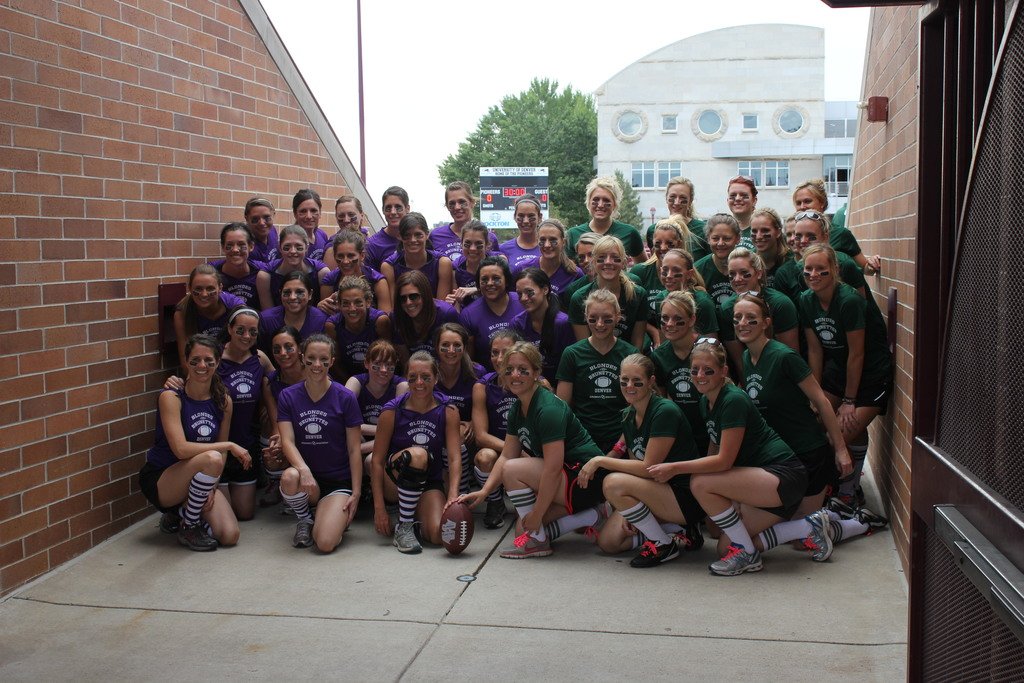 Sports That Inspire: Pigskin and Ponytails

The smell of fresh cut grass wafted through the stadium as they watched the last line of paint dry on the field. Clouds, thick and threatening, cast an ominous mood over the stadium, as lightning illuminated Denver’s skyline. The menacing conditions, however, were of little concern; their focus remained steadily on the battle ahead. Pulling their hair into ponytails, pulling up their knee socks, and completing one last hamstring stretch, the combatants took their positions — the chocolate, walnut, and chestnut tresses crouched down, eyes fixed on their platinum, honey, and ash-maned opponents. The signal sounded, and with the kickoff, the very first Denver Blondes v. Brunettes Flag Football game commenced.

While the first of its kind in Denver, similar events — pitting fair-haired beauties against darker-tinted divas —  are highly anticipated in thirty other cities across the country. Initiated in Washington D.C. by the Alzheimer’s Association, the spirit of the game and the essence of the cause beckons blondes and brunettes everywhere to take the field.

For the Blondes:
Erin Pursel, 28, Defensive Back

Erin moved to Colorado from Kansas two years ago, compelled by Denver’s natural charm and irresistible outdoor atmosphere. The decision to move was easy; however, leaving her grandmother behind proved one of her most difficult decisions. As the only grandchild, Erin and her grandmother, Sonja, shared an inseparable bond. Moving from Germany to the United States at the age of twenty-one, Sonja served as the symbol of independence and determination in her family. She instilled in Erin a sense of individuality and taught her the importance of standing up for herself.

Just four years ago, Sonja was diagnosed with Alzheimer’s. of The signs were subtle at first — agitation, giving way to forgetfulness. However, on her most recent visit, Erin notes that Sonja was the worst she had ever seen her. The disease had taken its toll, rendering Erin’s grandmother without speech ability, leaving Erin without a way to communicate with her role model. In order to cope, Erin joined the Young Professionals Alzheimer’s Association of Colorado (YPAAC), an auxiliary of the Alzheimer’s Association of Colorado. YPAAC provides Erin a way for Erin to once again feel close to her beloved grandmother. And, while Sonja continues to suffer from the disease, Erin hopes that her involvement with YPAAC will help fuel a cure for future generations of her family and many others across the country.

For the Brunettes:
Brooke Rinehart, 31, Center

Brooke moved to Denver last year from an East Coast Pennsylvanian town, fueled by an eagerness to experience all that Colorado has to offer. Brooke too found the cross-country trek a bittersweet experience as she also had to leave her family. Brooke’s grandmother, Henrietta (endearingly referred to as “Hank”), provided Brooke with unconditional support. No matter her endeavors, Brooke could always rely on her grandmother to believe in her.

In previous years, “Hank” lived happily, albeit with Diabetes and Alzheimer’s, with her loving husband. However, the couple’s living situation grew increasingly dangerous as her husband’s blindness rendered him unable to monitor his wife’s diet. Forgetting her own diet restrictions, “Hank” would eat food that proved detrimental to her health. On one particular visit, Brooke’s mother found “Hank” weak, frail, and weighing only 100 lbs. Inevitably, “Hank” required special care at an Alzheimer’s home. However, as this was quite an adjustment, the medical staff required that Brooke refrain from visiting her cherished grandmother. Heartbroken, Brooke recalls how during her last visit, “Hank” could not remember her.

Joining YPAAC provided Brooke a way to return the unconditional love she always received from “Hank”. Through this organization, Brooke offers her grandmother the same support and motivation “Hank” always gave her.

The Young Professionals Alzheimer’s Association of Colorado consists of twenty to forty-year-olds, who possess a passion for supporting programs and research for those with Alzheimer’s. Many become a part of the organization as a way to stay close and support loved ones back home. The money raised from events throughout the year supports local programs and services and funds national research for a cure.

Deaths from Alzheimer’s increased 66 percent between 2000 and 2008, while deaths from other major diseases, including the number one cause of death (heart disease), decreased.

As Brooke points out, Alzheimer’s is often hardest on the people supporting their loved ones suffering from the condition. At some point, the affected individuals no longer remember,  but their sons, daughters, and granddaughters do. Alzheimer’s overwhelmingly affects women, and what’s more, ¾ of Alzeimer’s caregivers are women. This gender bias served as the inspiration for Saturday’s’ event – Blondes vs. Brunettes: Tackling Alzheimer’s with Serious Altitude flag Football game. Each team donning their respective coif color, practiced weekly for months, enduring broken fingers, torn ACLs, blood, sweat, and tears. The pain and the commitment, in their minds however, cannot compare to suffering of their loved ones. what So, geared up in knee socks and ponytails, sixty or more ladies lined up, blonde versus brunette.

Overall, the event, the first of its kind in Denver, raised over $66,000, breaking the fundraising record for inaugural Blondes vs. Brunettes battles across the country. Each player raised a minimum of $400; and each team held a private fundraising event — happy hour for the blondes and yoga class for the brunettes. Heightening the age old mop-motivated rivalry, Emich Volkswagen and Emich Chevrolet joined the competition as corporate sponsors, backing the brunette and blonde teams, respectively.  And, while the game pitted these battling beauties against each other on the field, their common goal and shared experience, united them and their loved ones across the country in a moment of achievement and success for everyone affected by Alzheimer’s.

And, as a proud dark-haired damsel myself, I’m delighted to announce that brunettes dominated, 42-0. Get ‘em girls.

Do you know someone with an inspirational story of accomplishment achieved through health and fitness? Email me at [email protected].