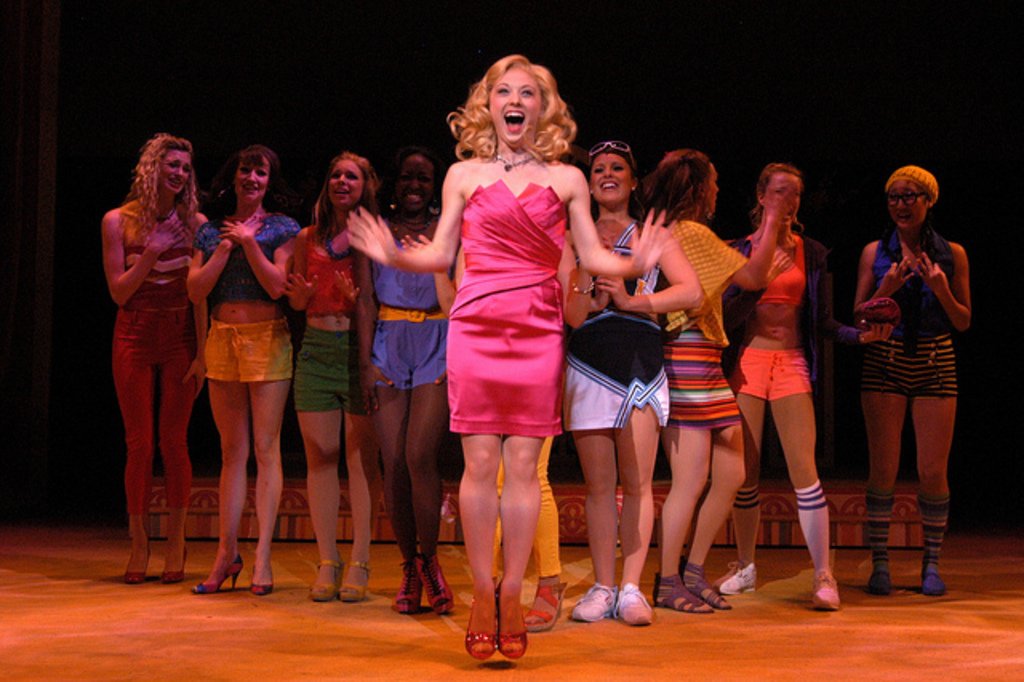 OMG, this is “Legally Blonde…”

For those who have missed the Legally Blonde movie franchise, the premise is simple enough. Elle Woods (Hayley Podschun) is a fashion merchandising major suddenly dumped by her beau (Curt Hansen) who wants someone more “serious”.

So, clutching her little chihuahua, she gains entrance to Harvard law school, where she is initially mocked for her pink outfits and ditzy style.

But, after reading a book or two, she’s accepted as an intern by a top lawyer, Professor Callahan (Jeffrey Roark) who’s defending a fitness guru Brooke Wyndham (Molly Tynes) in a murder trial.

Using her fashion expertise to crack the prosecution case, Elle is transformed into an American equivalent of George Carman.

Director Gavin Mayer, along with music director, David Nehls and choreographer, Kitty Skillman Hilsabeck keep it all light, fast, fun and frothy. The music is fantastic as the band rocks out and there are some terrific dance routines and even a little bit of stunting when Elle presents herself to the Harvard professors with a full supporting company of cheerleaders.

The sub-plot, in which Elle comes to the aid of the lovelorn manicurist Paulette (Sarah Rex), is much sparkier than in the movie: partly because the hand-merchant is turned into a woozy Celtic romantic and partly because her stud-like rescuer, who show-stoppingly announces: “I’ve got a package”, is not the least bit Irish but just Irish enough to justify a full ensemble of Irish steppers, some in hot pink wedges no less.

Podschun as Elle is also far more vivacious than Reese Witherspoon, sure we all the love the starlet but something about Podschun is just more perky, trim, and fun. To top it all off, she sings wonderfully. But her true star quality lies in her sense of delivery. Every line whether comedic, dramatic or somewhere in the spectrum is delivered with such honesty. You want her to succeed. 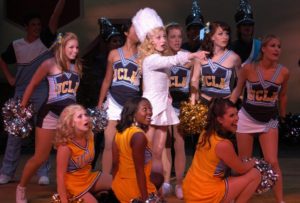 The rest of the cast is also excellent, with Julia Perrotta, Heather Doris and Aisha Jackson playing friends and confidants Margot, Serena and Pilar pulling some great, and completely in character, faces in background scenes. The trio strut and bounce around the stage, offering sage advice and small confidence boosters throughout. Now if only everyone had a loyal greek chorus, the world might be a better place.

Rex portrays Paulette, owner of a hair salon who misses her dog very much and has bad luck with men. But thanks to Elle and her “Bend & Snap” technique, she finds love. Rex is highly enjoyable in the role and has a knack for comedic timing. 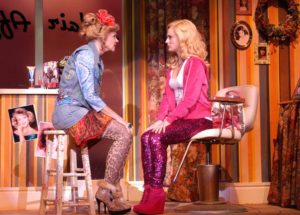 The funniest performances of the night were provided by Joel Domenico as Carlos and Rikki James as Nikos, the two gay and European men are hysterical in the courtroom scene. Okay, so they are flamboyant, and over the top but it’s just hilarious. Their comedic talents are splendid in the production.

It would be wrong not to mention the doggie stars too – Bruiser and Pickles (aka. Rufus), whenever they take the stage is almost impossible not to look.

Finally, it should go without mentioning that the Arvada Center always knows how to build a set and dress a cast. The set is magnificent and you almost expect nothing less from the amazingly talented Brian Mallgrave. Fresh from his win of Project Runway All-Stars, Mondo Guerra provides a nice array of color and style to cast. The reveal of Elle in her evening dress is beautiful, pan down to the shoes and your heart will stop. The man knows how to dress and it shows in each and every scene.

Legally Blonde is a feel good musical, sure you know what’s gonna happen and there’s not a ton of surprises but you also know that you’re gonna feel great by the end of the night. There were a few rougher patches through out the night but they are easily forgotten when you find yourself humming a little diddy on your drive home. Legally Blonde plays now through July 1. 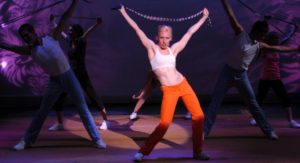