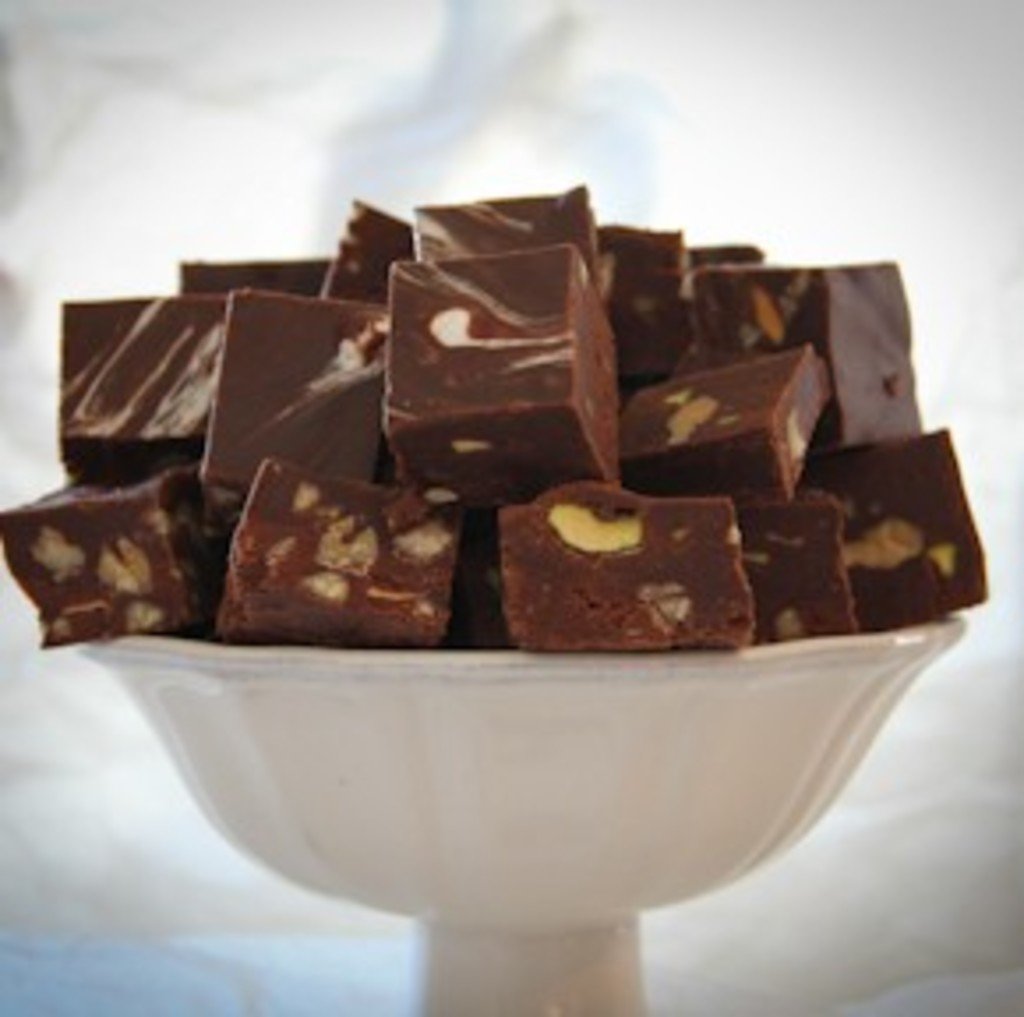 The Nitty Gritty Business of Fudge

Fudge is fickle. Authentic, old-fashioned fudge is tricky business and not for the faint of heart. I know. I made five disastrous batches (no thanks to the Joy of  Cooking). But it’s the holidays and I wanted some fudge and I couldn’t be defeated by sugar. So I made it till it worked by making my own recipe.

Because I grew up in Ohio and had parents who could make it (and I went to culinary school), I’m just supposed to know how to make this crystalline candy. It turns out that the fudge has played me like a fiddle.

The trick to great fudge is learning how to master the grit, aka sugar crystals. The best fudge is creamy and the worst is gritty. (I don’t believe those folks who claim to actually LIKE gritty fudge. Who are they kidding?)

Fudge is typically made from a mixture of sugar, a liquid, butter and chocolate that is cooked to the softball stage, then left undisturbed until cooled, and then beaten until creamy. But there are traps every step of the way. It’s the cooking of, and resting of, the sugar that can foil our fudgy efforts.

Fudge involves alchemy – in this case, the evolution of raw sugar that is melted, cooked and converted from large crystals into a liquid then converted back into microfine crystals. Once melted, the goal is to keep crystal formation at bay until the syrup cools from 234ºF (soft ball) down to 110ºF. Theoretically, once we get to 110ºF, we DO want to beat the fudgy syrup and CAUSE sugar to recrystallize into crystals so fine they are imperceptible to the tongue.

Unfortunately for fudge makers, sugar is hyper sensitive. Even a small, unmelted sugar crystal can ruin a batch of fudge. As liquid sugar cools, any unmelted crystals will start to grow and multiply (like ice crystals on a window in winter time), rendering the entire pot a large, grainy mess. Or, if ‘agitated’ to soon, the agitation itself will cause warm sugar to recrystallize into large grit. It can’t help itself. It’s what it wants to be.

Even the recipes in the trusted Joy of Cooking cookbook are easily ruined. I managed to fudge up the Fudge Cockaigne recipe three times, but some of that I think is their fault. They say not to stir a mixture that contains milk which just resulted in a scorched mess. I ruined the Coffee Fudge recipe, too, because I either didn’t thoroughly melt the sugar during the melting phase or I agitated it too soon before the 110ºF temperature phase, or I beat it for too long before the turning-it-into-the-pan phase causing it to seize up on me. Mon Dieu!

With each failed attempt, though, I knew I was beginning to master this devil candy.

The Joy of Cooking recipes follow the same pattern: melt the sugar, cover the pan, steam, don’t stir, cook to soft ball, let sit undisturbed (don’t move it, don’t jostle it, don’t breathe on it, don’t let a speck of dust fall into it – for heaven’s sake, don’t agitate the sugar – exaggeration added!) until it reaches the magical 110ºF when you are allowed to beat it until it loses its shine. At this step you are actually coaching the ‘melted’ sugar back into a super fine crystalline form. Then pour into pan.

Voila – gritty fudge – because this technique is just too hard to make work. I had mastered the melting and waiting phases, but killed it at the stirring phase, when I stirred it for too long. The sugar crystals were small – yay me! – but it solidified in the pan before I could get it into the fudge tin. I ended up with fudge rocks.

But there is hope!

The following recipe incorporates those cheats. Earlier, it was emphasized not to stir, but constant stirring is needed in this recipe, otherwise, the evaporated milk would scorch and turn to toffee. “Fred’s Christmas Fudge” contains many stabilizing ingredients to help ensure creamy fudge.

Patricia Bainter is a blogger and writer for 303magazine. She trained at Le Cordon Bleu London and shares her culinary musings and recipes at her own website ThePatricianPalette.com. Photos by Patricia Bainter.