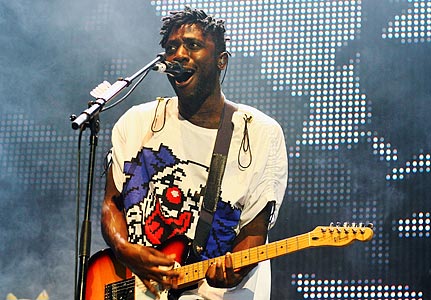 In 2005, English buzz bands were as common as pigeons in Piccadilly Square, and almost as pestering. Beatlesque ensembles feigned talent and ability; post-punk outfits channeled Ian Curtis and Ian McCulloch with sickening precision. And amidst the milieu only a few survived to even record second and third records, let alone salvage critical acclaim for them. Bloc Party is one of those bands.

The band’s debut reached levels of success that most can hardly fathom on the heels of a few radio-shy singles and while it wasn’t difficult to distinguish them from artists making waves at the time, it might have been surprising to most that the songwriting on A Weekend in the City, Bloc Party’s second release, would exceed Silent Alarm in quality and thoughtfulness. Then came Intimacy, an explosive (albeit more expected) return to form, pocked with techno-inspired rhythms and synths that soared.

Of course, itâ€™s not so much the quality of songwriting that set Bloc Party apart from other bands that came out of that mid-Aughts new-wave revivalist primordial ooze. It was singer Kele Okereke‘s increasingly personal lyricism, overtly related to his own personal growth as an openly gay front man surrounded by oddly masculine contemporaries. It was only a matter of time before his electronic tendencies transcended Bloc Party altogether.

Kele’s first solo effort finally came in 2010, an almost entirely electronic departure from Bloc Party’s fidgety early work. Boxer is a sleek collection of 10 tracks that make even Intimacy feel sludgy and gritty at times, and when Kele walked on stage at Denver’s Summit Music Hall, it was clear that the pending event would be more of a rave than a live performanceâ€”though his backing band transformed sounds from Boxer into something more palpable. They smashed through most of the record, including the single, â€˜Tenderoniâ€™. But the most impressive moment came during the performance of â€˜Everything You Wantedâ€™, the one track on Boxer that feels most like Bloc Party. Thereâ€™s a certain soul-bearing that happens during this song; itâ€™s not hard to believe that Kele sang the lyrics truthfully.

Major takeaways from this show (aside from the fact that people are crazy for leaving after Does It Offend You, Yeah? finished their set) are that A) Kele will continue to explore songwriting whether or not Bloc Party is around to help, and B) it wouldnâ€™t be the worst thing if the chemistry Kele shared with his former (?) bandmates led to a fourth album.