Proud father of a fruitcake

My dad is rad. Sure, he accepted a job transfer that significantly minimized his role in my adolescence, but he left behind a box of vintage magazines and a comic book called “Where Did I Come From?” Also, he’s been so much more than a mere sperm donor since. Allow me to stroke his ego for a few.

Mythology is an important part of any artist’s mystique. Having been born in San Francisco is a key detail in my own personal version. Not only is it the birthplace of Burning Man (effectively the planet’s largest open-air art gallery), the City by the Bay also spawned one of the world’s hottest electronica scenes, including one of my all-time favorite aural pleasers: Bassnectar. Plus, California is the second biggest citrus-producing state in the country. If my dad hadn’t signed up to jump out of Army airplanes, then gotten stationed on SF’s Presidio base, my birthplace bragging rights might’ve been a pipe dream. I could’ve been introduced in Indiana instead. Seriously. My phone’s Golden Gate Bridge desktop serves as a perpetual reminder of my rainbow-embracing origins. Also, he handled Agent Orange in ‘Nam. He used it to manage weeds. Don’t let him tell you otherwise.

South Park Salsa is a starving artist’s best friend. The old man’s been canning homemade sauce and delivering it to my doorstep for a decade and a half now. The recipe got its name from South Park City, the same Fairplay ghost town that lent the Comedy Central cartoon its moniker. You should hear the munchies-referencing, faux jingle I penned. When I was a freshman in college, I had a dorm mate whose parents made homemade tortillas. Talk about pure win. Tossing tortillas in the toaster tops chips any day of the week BTW. We would occasionally demolish half a Mason jar in a single sitting. It’s worth noting that my old man has minimal sense of taste. He fainted in a grocery store once and ended up with a mild concussion, putting the kibosh on most of his olfactory abilities. Consequently, his palate–which is interestingly inextricably linked–was permanently impaired as well. Because spice provides such an extreme sensation, it’s one of the only flavors he can still distinguish. Neither his bread and butter pickles nor his apple butter suffer from their chef’s handicap, though. On the contrary, all of the above facilitate happy endings galore–for my taste buds.

Toastmasters slay stage fright. I’ve been attending Toastmasters meetings since I was a wee crumb stealer. In case you’re picturing a group of bread-browning breakfast experts, Toastmasters is actually an international public speaking organization. A club for people who like to flap their traps. My father’s a prominent member. District Governor, actually. Being exposed to Toastmasters at such a young age probably contributed greatly to my extreme comfort level in front of an audience. Stage presence is important for a performer, after all. Not yacking on the front row is preferable. Shamu can get away with designating a splash zone. Gallagher too. Orange peel? Maybe if it’s citric acid–not stomach acid.

Bookworms make good role models. Being a professional writer isn’t necessarily feasible without being a voracious reader. Someday, I dream of living in a haphazardly organized library like my dad’s. I’m pretty sure he’s on a first-name basis with the cashiers at Tattered Cover. And Borders. And Barnes & Noble. You get the picture. My own entertainment journalism has benefited immensely from subscriptions he maintains to publications like Entertainment Weekly, as I’m always the de facto beneficiary of dog-eared, occasionally soiled second-hand copies. When I eventually get around to authoring my own tome or even screenplay, dedicating it to my dad would certainly be in good form.

I could go on and on for eons, but I’m done stroking pop’s ego for now. Happy Father’s Day, dad. Hope you like your Toastmasters-themed singing telegram. It’s to the tune of your favorite Johnny Cash cover, “(Ghost) Riders in the Sky”. 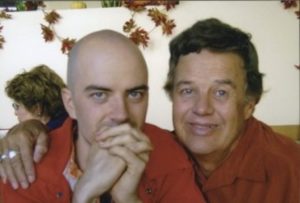