On the corner of Broadway and East Iowa Ave. lies one of Denver’s most unique stores, FashioNation. The storefront has a long and rich history with the city as it has been the only clothing store geared towards the punk and underground community for over 35 years. 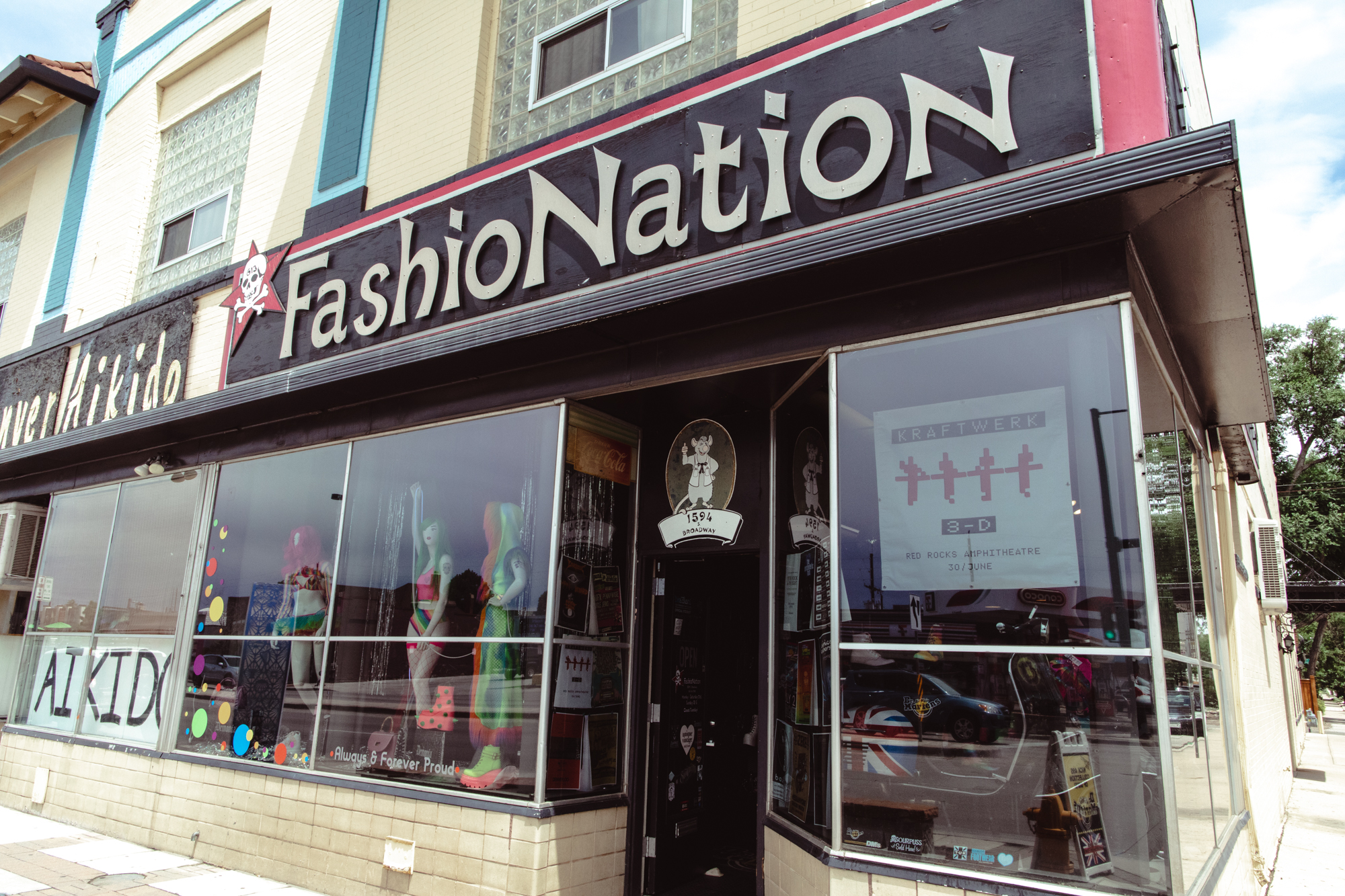 The Story Behind the Boots

The family-owned store, created by Pam and Paul Italiano in the 80s, is a hub for all things rock and roll and alternative. Their products range from studded belts to glittery bags to their iconic and extensive collection of Dr. Martens.

Before FashioNation, the couple worked at a popular Denver club, Rock Island, where Paul was a DJ and Pam worked the door. They did this while both having jobs at King Soopers and while Pam, a skilled seamstress, made clothing for alternative clothing stores around town. In 1987, however, King Soopers employees went on strike. With no prior business background, the couple started FashioNation on a whim.

“We opened the store and all of a sudden it started to snowball,” Paul said. 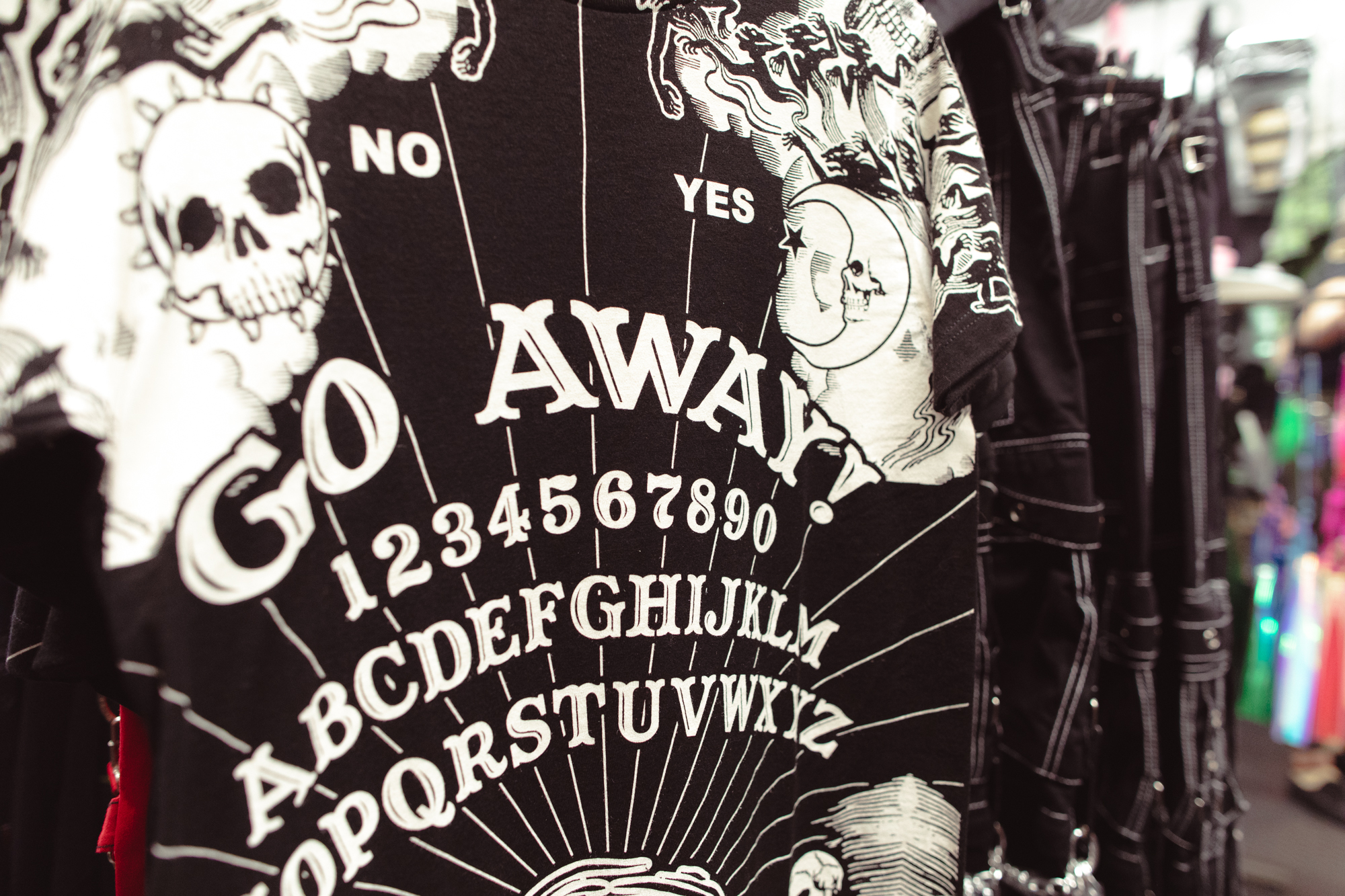 Initially, with only 40 pieces of clothing and $1,000, FashioNation existed as a place to hang out with friends and drink. During this time, the couple took a trip out to New York, where they looked forward to shopping since they typically made their own clothing. While there, they stopped at a trade show, where they met a man selling shoes. After returning to Colorado, Paul called him. One short conversation led to the Italianos receiving 1,000 pairs of shoes from their new connection on the agreement that they would pay him back once they were sold. Within a couple of years, they had paid off their loan and became an established shoe store.

“Maybe that’s karma, the model of the store is, ‘never hesitate to do the right thing,’” Paul said.

Around this time, the grunge era was arising and Dr. Martens were on the rise. The Italianos followed advice from another shoe salesman who said, “Docs are going to be better than money in the bank.” 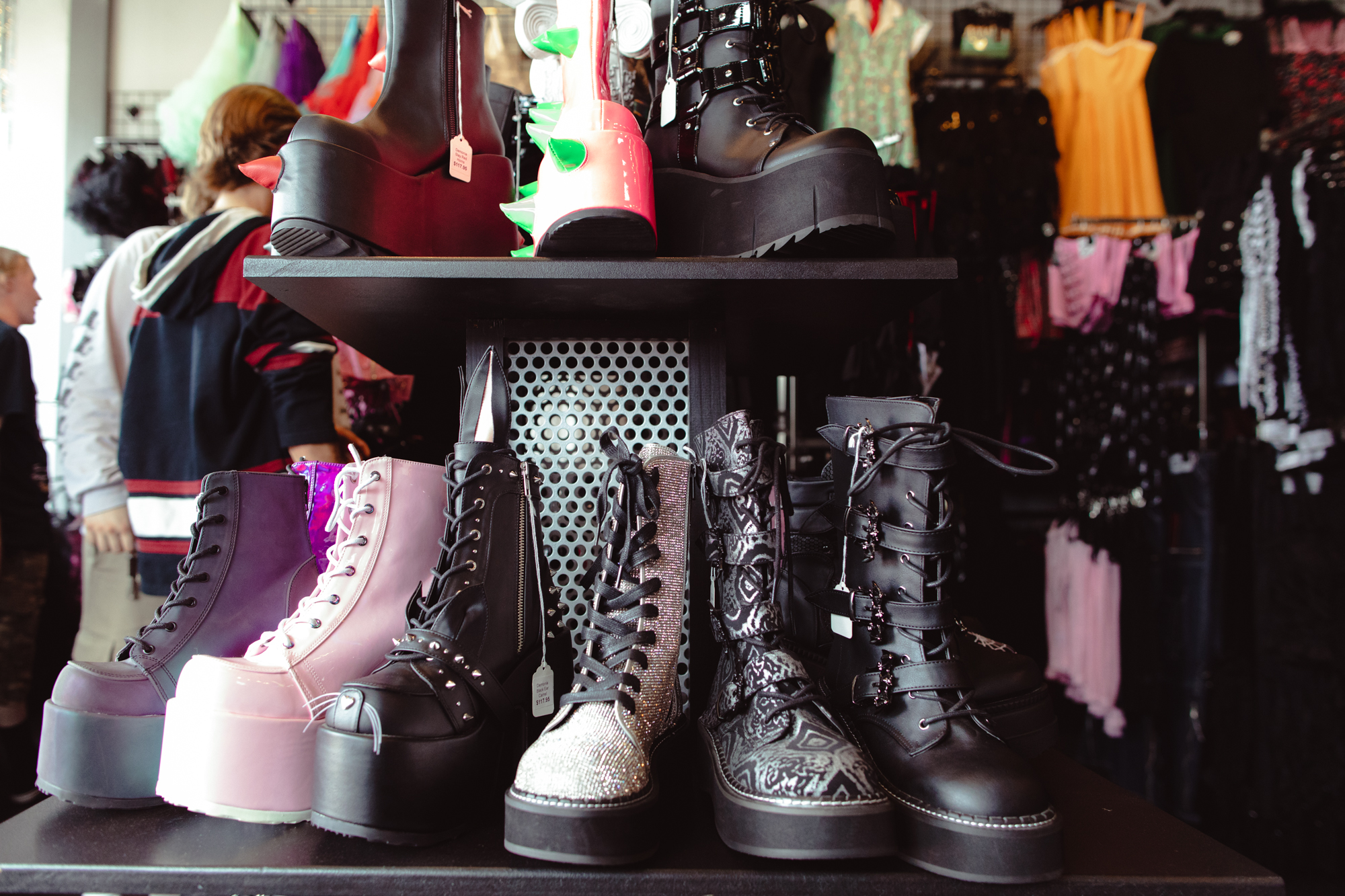 In 2014, the rent at their store skyrocketed, leaving the family with no choice but to relocate. Thankfully, it came at a time when they were grateful for the move since their previous location didn’t bring in the crowd they catered to. Their fresh space on Broadway ended up being the perfect new home.

“We decided to roll the dice one more time and find this spot. But thankfully we did because it’s really blossomed,” Paul said.

Pam, known as the creative genius of the duo, designed the store to look how it does today and played a massive role in building and decorating. As part of their renovations and as a tribute to the old store, the family made sure to take the screws from their previous home on 13th to drill into their new location. This way, the “soul of the old store” remained. 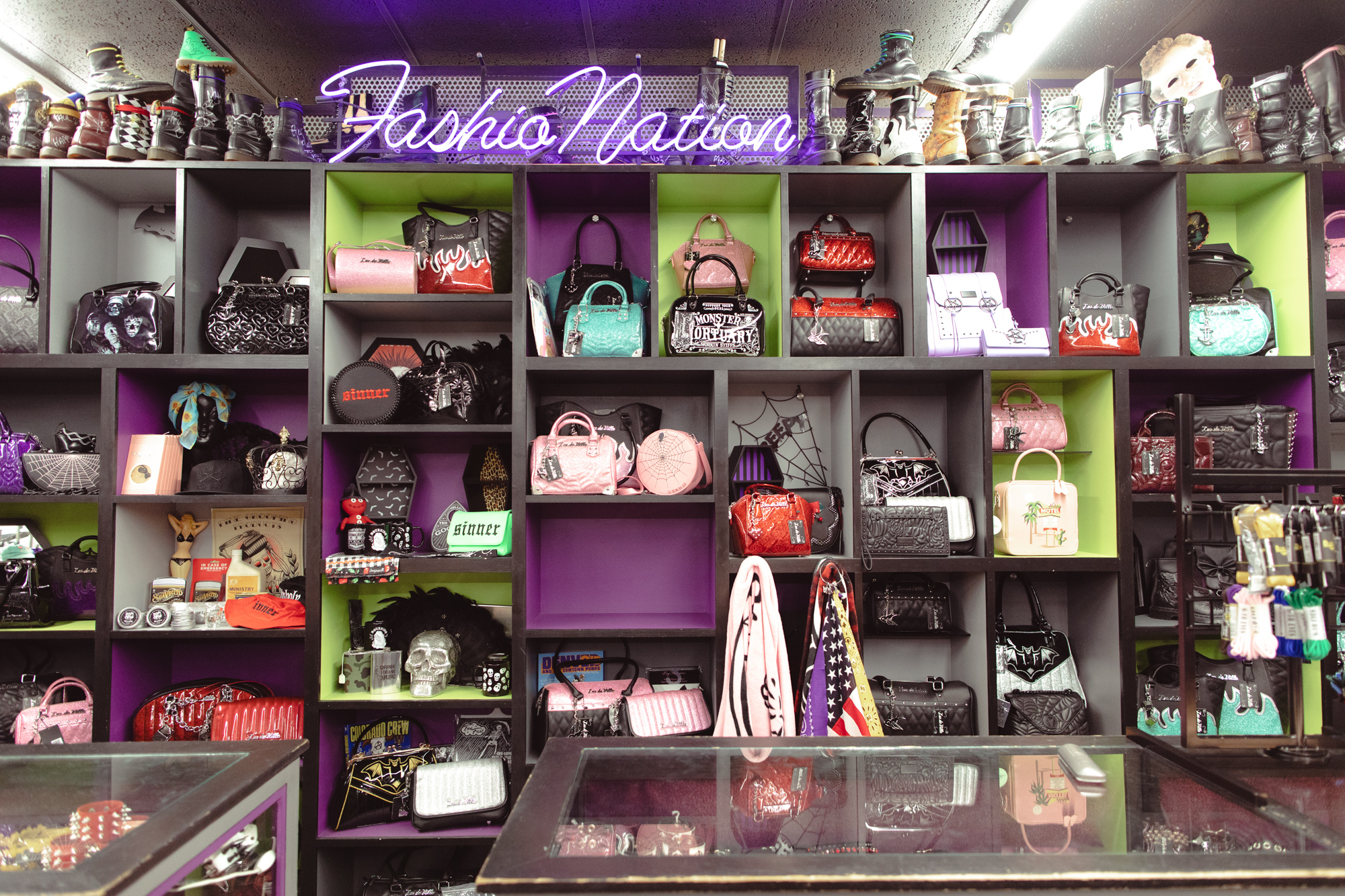 As the team slowly rebuilt after the move, the pandemic quickly shut them back down. Like most businesses, they feared what would happen to the FashioNation storefront. However, when they reopened, many of their loyal customers came back to support the shop. One of which was a girl who made a TikTok of the store, which racked up over 100,000 views in just a short time.

Seeing how much people loved the store online, Paul and Pam’s daughters and lifelong FashioNation employees – Mia and Sydney Italiano – decided to create their own TikTok account. Their first video, which described the history and uniqueness of the store, quickly went viral. Within a week, they gained 20,000 followers. As of now, their account has over 800,000 followers, with their most popular video having 25 million views. This got the ball rolling for not only more shoppers coming in, but publicity as well, including attention from 9News and Westword.

The store’s inventory appeals to all types of communities, but they heavily focus on their claim to fame: the Dr. Martens collection.

“We’re definitely old school on our shoes, we carry shoes that a Doc’ lover would wear,” Paul said. “We’re not after every new fashion, we’re after the tried and true.” 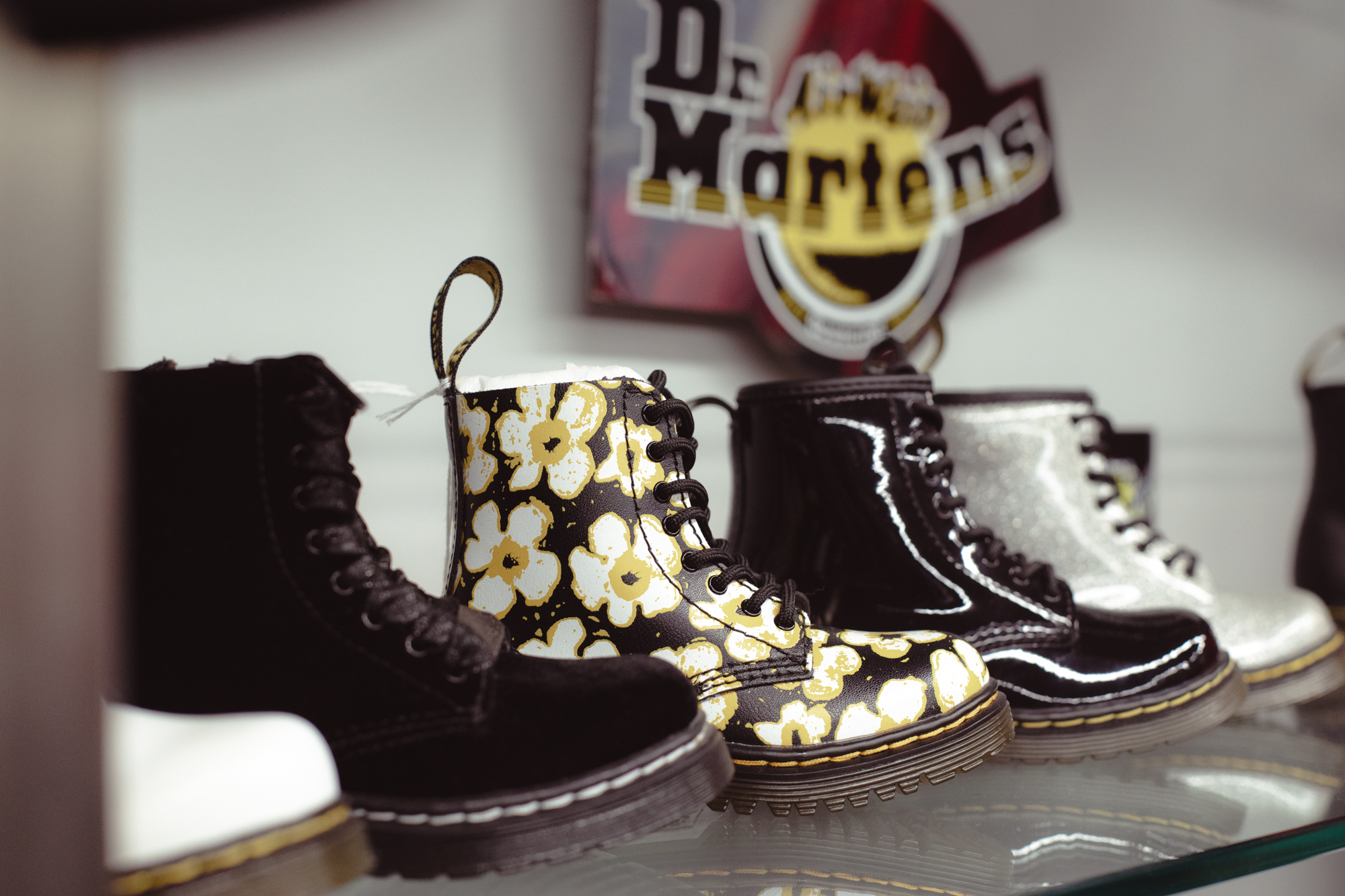 As one of the largest and most loyal Dr. Marten sellers in the country, FashioNation receives many of the company’s exclusive shoes, including their new Betty Boop collection, which only went live in 10 independent stores. The Italianos even got to design their own boot on the 13th anniversary of FashioNation. Instead of a 10-eye or 8-eye boot, they created a 13-eye with their names embossed on the side.

Over the years, FashioNation has turned into a space that’s much more than just a store. Inside, the Italianos foster community.

“You’re through the door, You’re one of us,” said Paul.

FashioNation caters to a broad spectrum of communities that aren’t commonly represented and aims to make them feel like they have a home when they walk in.

“All the different communities have really embraced the store,” Italiano said. “The queer movement, they’ve always been fans of the store. All the little spooky kids, all the goth kids, all the punk rock kids. This is their home base.” 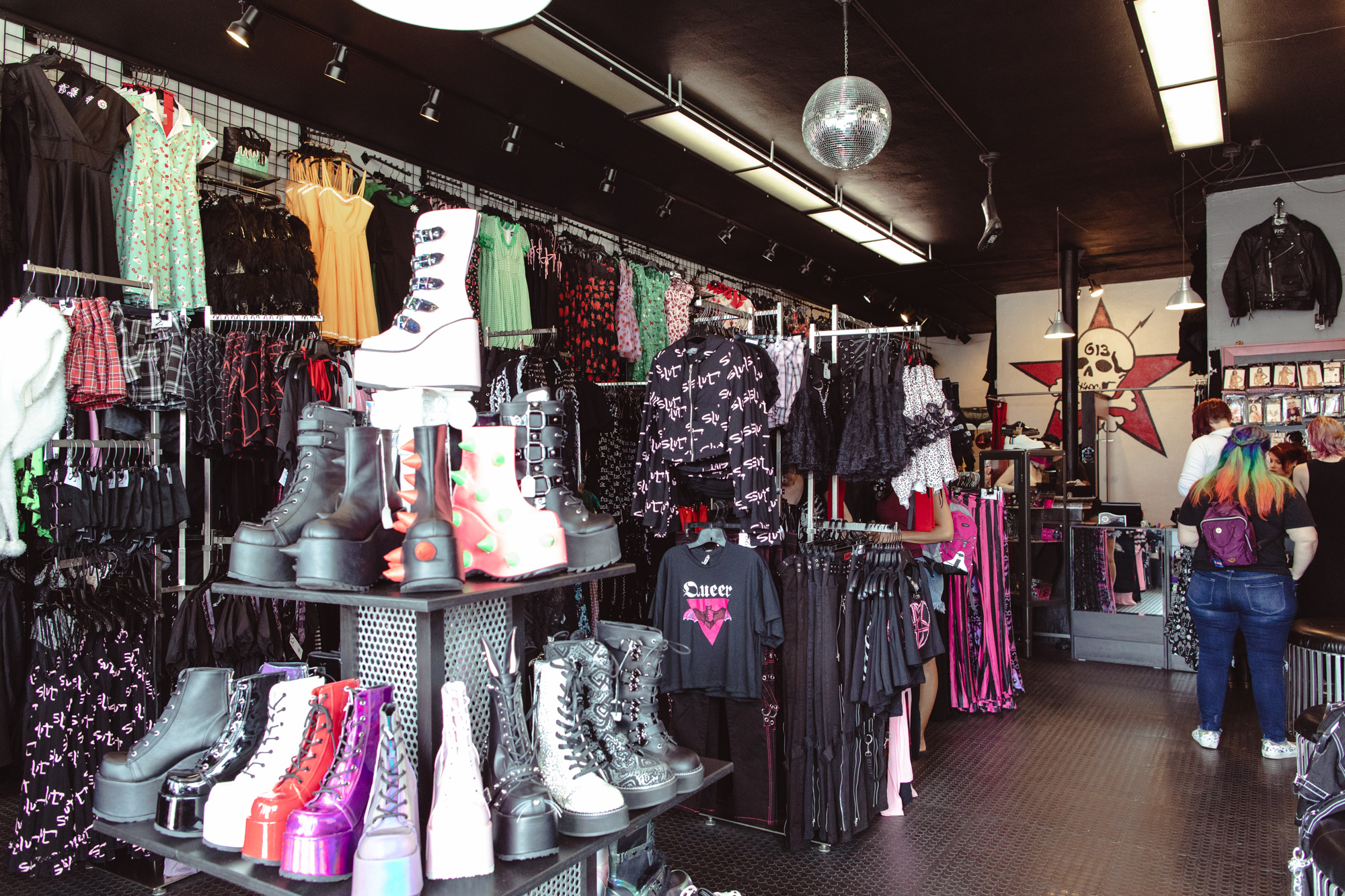 Recently, the store was in a scene of Generation Drag, a show about five teenagers preparing for a drag show for LGBTQ+ youth. As a store with strong values of inclusiveness, the Italianos were proud to be a part of the teenagers’ shopping experience.

To make customers more comfortable with the shoe-shopping experience, the team teaches them about non-binary European sizes as opposed to men’s and women’s sizes. This allows shoppers to go to other stores and know exactly what size to ask for.

“It’s really cool if you can open that door for them,” Italiano said. “When they leave here, they found that they have a place they can trust. That’s huge. All you wanna do is put wind in their sails.” 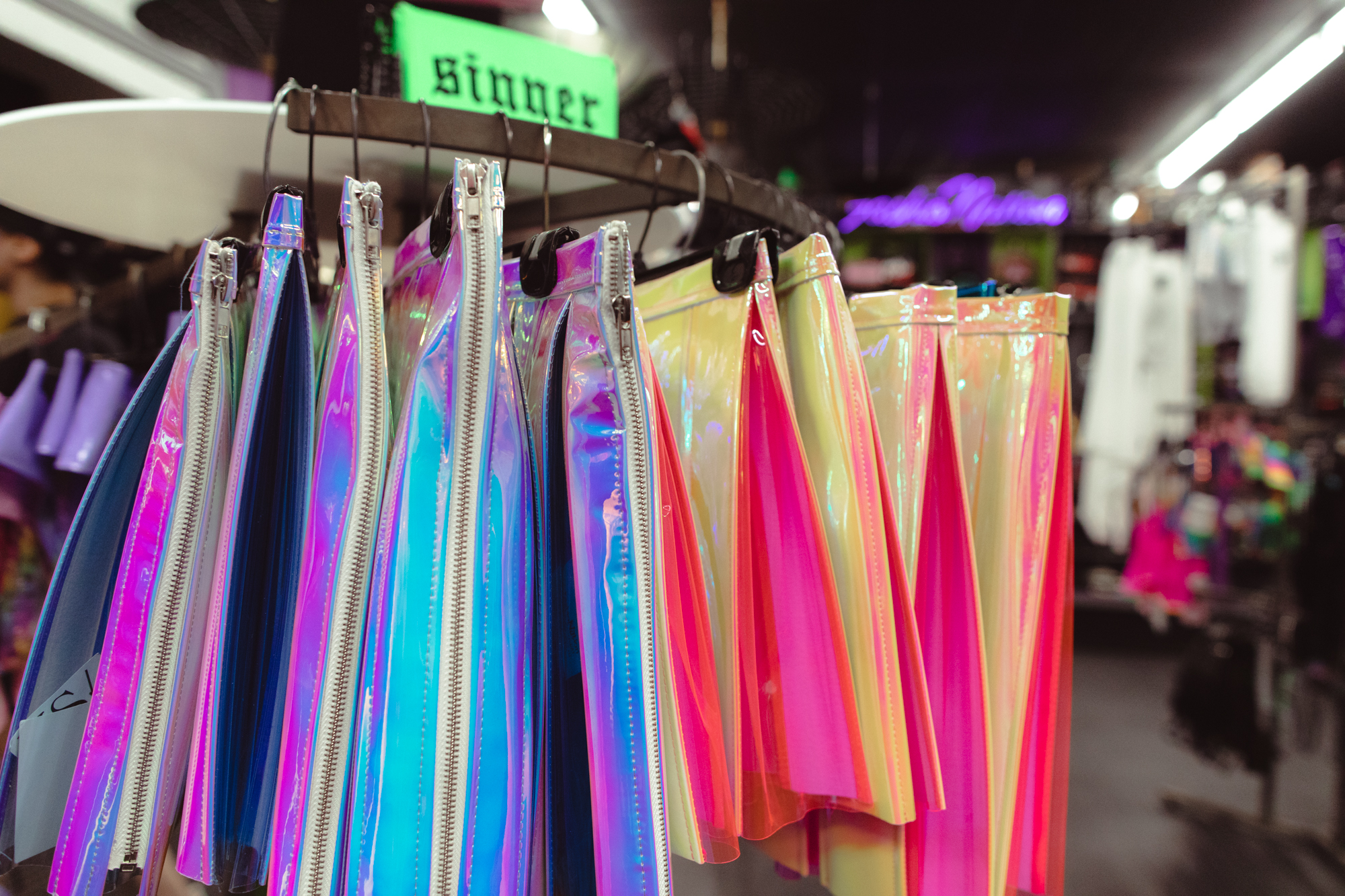 A Store Compiled of Traditions

Walking through FashioNation, you’ll walk past their staircase leading to the basement filled with inventory. Along a wall hangs row after row of framed photos. Each photo is of a band or rock star that has visited the store. Green Day, The Cure, Dead Kennedys and Joy Division are just a few of the big names to walk through FashioNation’s doors.

“That’s the legend of the store,” Paul said. “If you’re gonna be rock and rolling, you should have some of these people come through the door.” 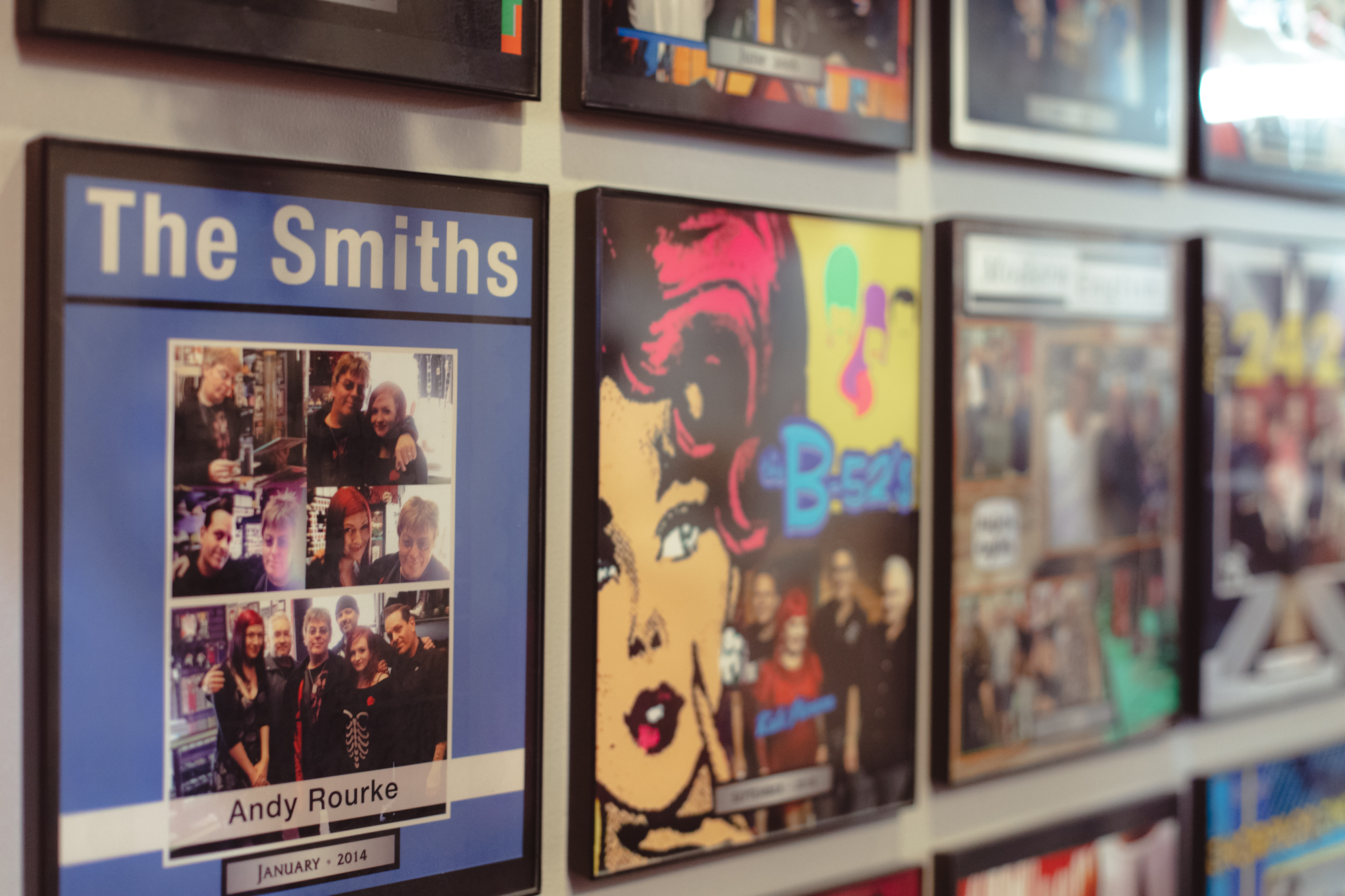 These famous figures typically come when they play shows in Denver and they often spend some time with FashioNation employees during the day.

Another one of the Italiano’s favorite displays and Paul’s favorite tradition in the store is tucked in the back, above the wall of Lux De Ville bags. One after another, old and worn-out Dr. Martens line the wall, all unique in size and design.

“That first pair of docs you bought, let’s say you wore them out and they were all dead and you’re buying a new pair of shoes,” Paul said. “We might make you leave them. Then, you’ll sign the bottom.” 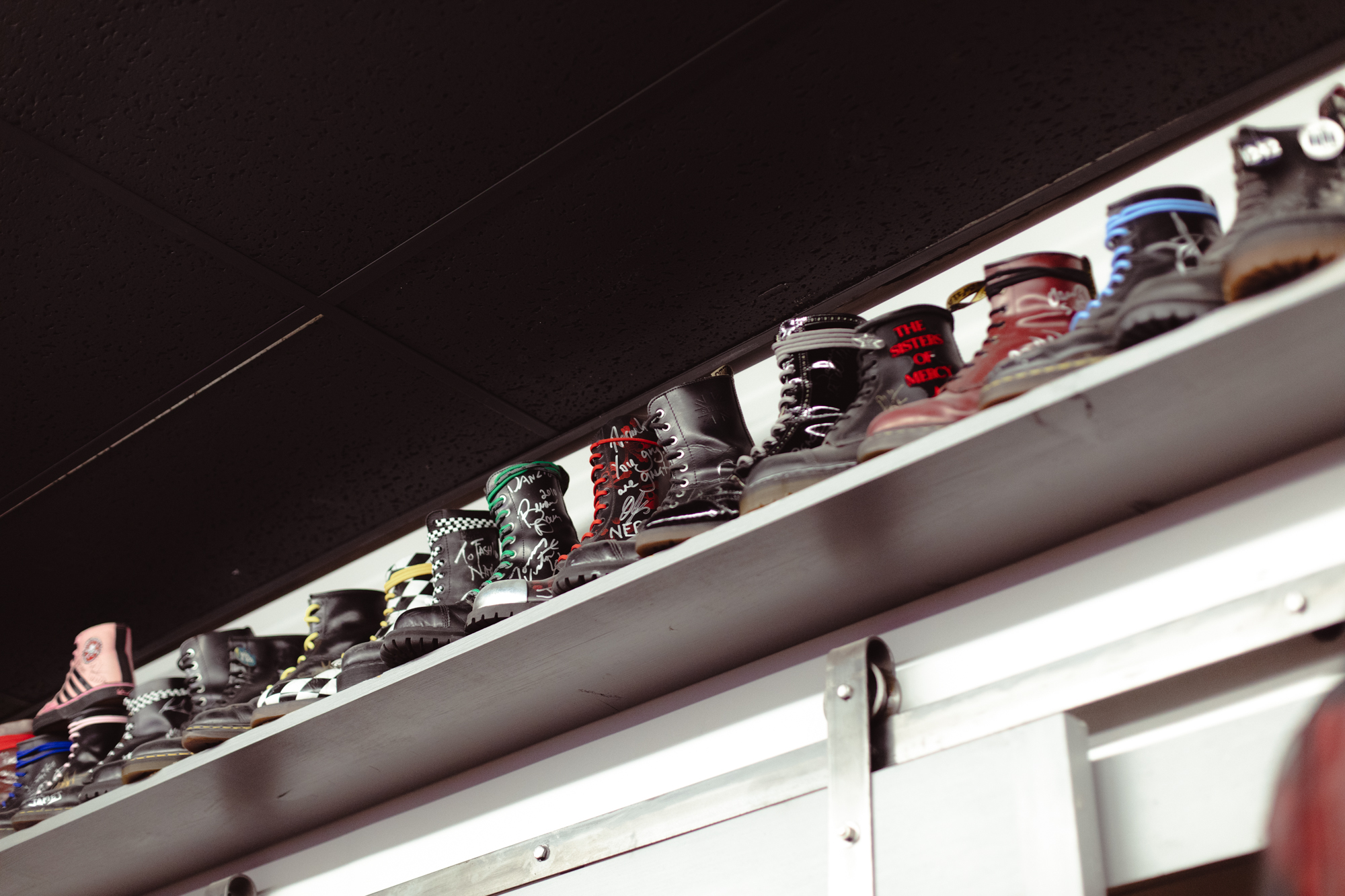 Each signed shoe is placed along the wall as part of the collection. Then, if down the line, another rock star pays a visit to the store, they will be asked to sign a shoe as well.

“Tears For Fears on that one, The Cures on that checkerboard one, She Wants Revenge is on that end, The Ministry is up there, Simple Minds,” Italiano said. “If we were a music store, we’d have a drum head signed, or a guitar store. Well, we’re a boot store.”

Italiano’s personal favorite, however, is a small, pink tennis shoe that sits in the top corner. It was a streetwear shoe of the brand Iron Fist Sneakers, created by Duane Peters of the US Bombs. The shoe was worn by his daughter, and when they met Peters, they had him sign it for the wall.

The story that comes with each boot is what the Italiano family loves the most, especially since many people buy their first pairs of Docs with them. The staff will even take pictures of kids when they make the big purchase, which then gets shown off on their Facebook page. Whenever a customer comes in, whether it be their first or 50th time, the staff cares about getting to know them and their stories. 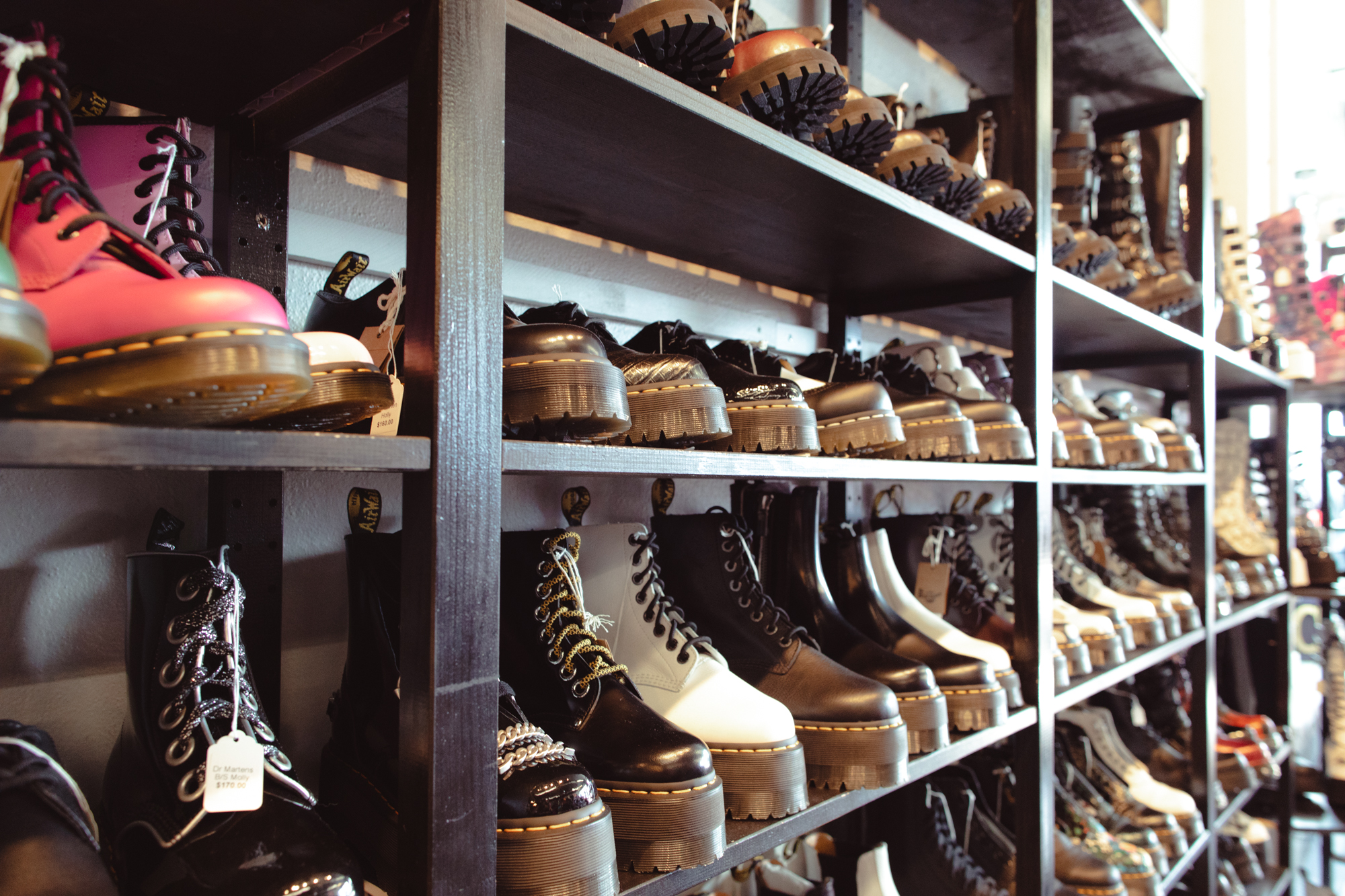 The legacy of FashioNation started with a young couple struck by boredom but over the years, has turned into a safe haven for self-expression, making the store one of the most memorable underground places in Denver.

“There are different ways to be wealthy, you know?” Paul said. “And we’re wealthy in all of our memories and all the fun stuff in the store.”