Zeds Dead knows how to throw a party, there’s no doubt about that. Every year DC and Hooks, the DJ duo known as one of the most iconic bass producers in the history of the genre, Zeds Dead, bring their eclectic range of electronic tunes to Red Rocks in celebration of our country’s independence day. Recently, they’ve also expanded the Dead Rocks experience to include a 4th of July Jamboree at Civic Center Park and a Dead Rocks Hangover show at Mission Ballroom. If you managed to keep the party going through all five of Zeds Dead’s unique sets, congratulations. You witnessed some of the best music the bass community has to offer. Even though you probably need two weeks off of work and a few dozen IVs to recover, I’m sure it was worth it. Regardless of which show you chose to attend, you got to witness something special — a carefully curated lineup dedicated to Denver’s thriving bass community.

Denver is known as the “Bass Capital of the World” for good reason. There are a hundred DJs and producers living in Denver putting on great shows every night of the week, and a hundred national acts stopping through our city on a monthly basis to blow our faces off. But only A Hundred Drums, a Denver-based DJ with a tendency for deep frequencies and ancestral sounds, could properly introduce the Dead Rocks audience to the massive scope of what was in store for the three-day holiday. A winner of Excision’s Bass Music Initiative who recently finished a nationwide tour with REZZ, the Dead Beats artist has been earning a shining reputation from fans and artists alike throughout the past half-decade. Her Dead Rocks set, complete with visuals by Actualize Visuals (who’s also based in Denver), proved exactly why. The grounded, humanistic nature of her sounds and vibe are irreplicable. Her slower tempo was a great addition to the fast-paced lineup, paired perfectly with the psychedelic experience Actualize Visuals provided throughout the entire set. 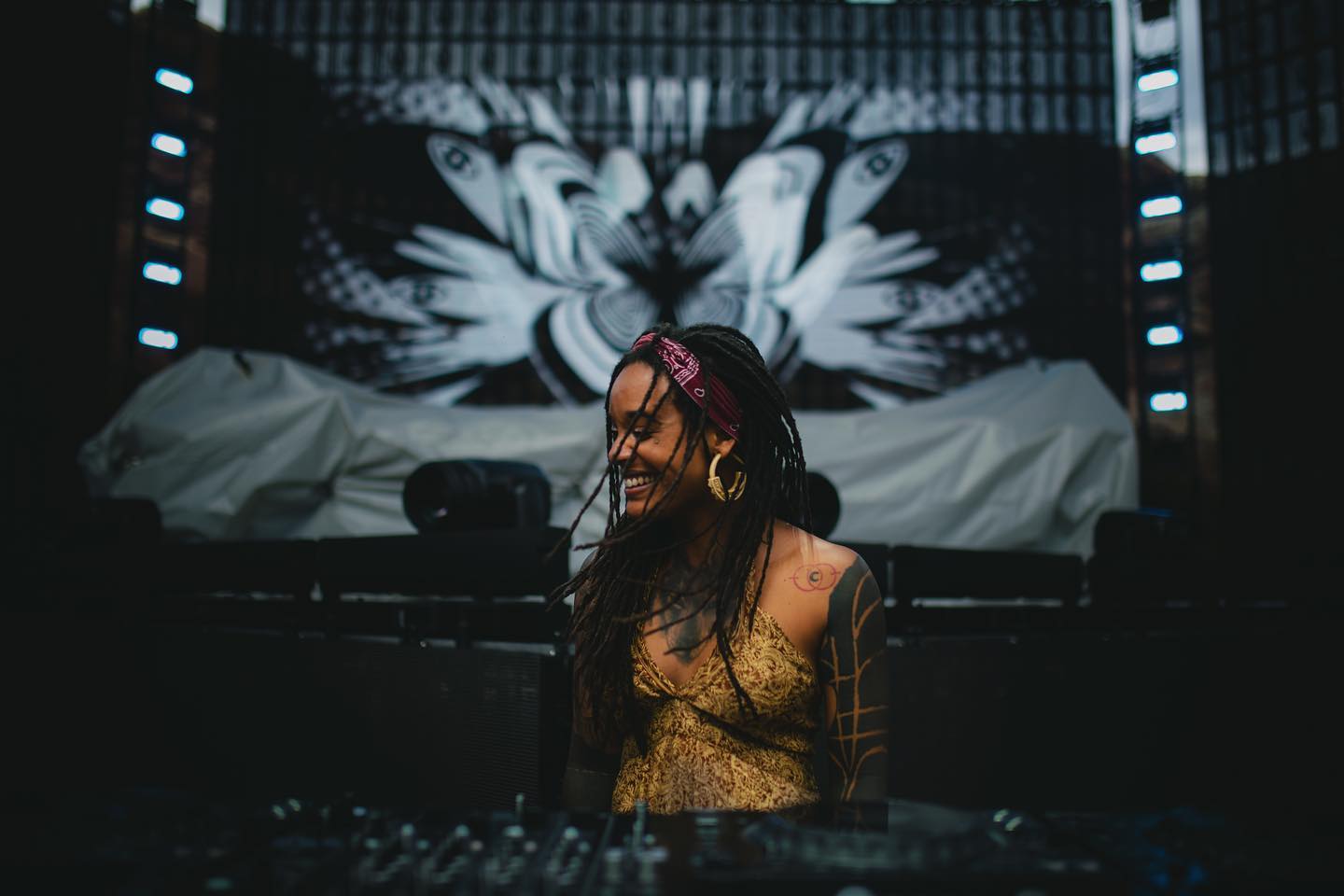 After a couple of fun D&B sets from UK-based artists DNMO and Hybrid Minds, another Denver-local made an appearance: Mersiv. If you’re into bass music, Merisv is someone who needs no introduction. His recent rise to bass stardom, paved by pretty forest bass, dark sonic wizardry and loud dubstep, has been a celebrated triumph throughout the community in recent years. His original music is also great. Pretty Dark Loud, his debut album released last October, is one of the most forward-thinking EDM projects in recent memory. His live sets, though, have a lot more hip-hop influence than you might expect. Thankfully, he pulled off remixes of Drake’s classic “Over” and Mac Miller’s “Nikes on My Feet” with great style and tastefulness. It’s always fun to watch Mersiv embrace the spotlight, moving with the music in a way that seems spiritual and all-encompassing. It’s a good thing fans love his music as much as he loves performing. 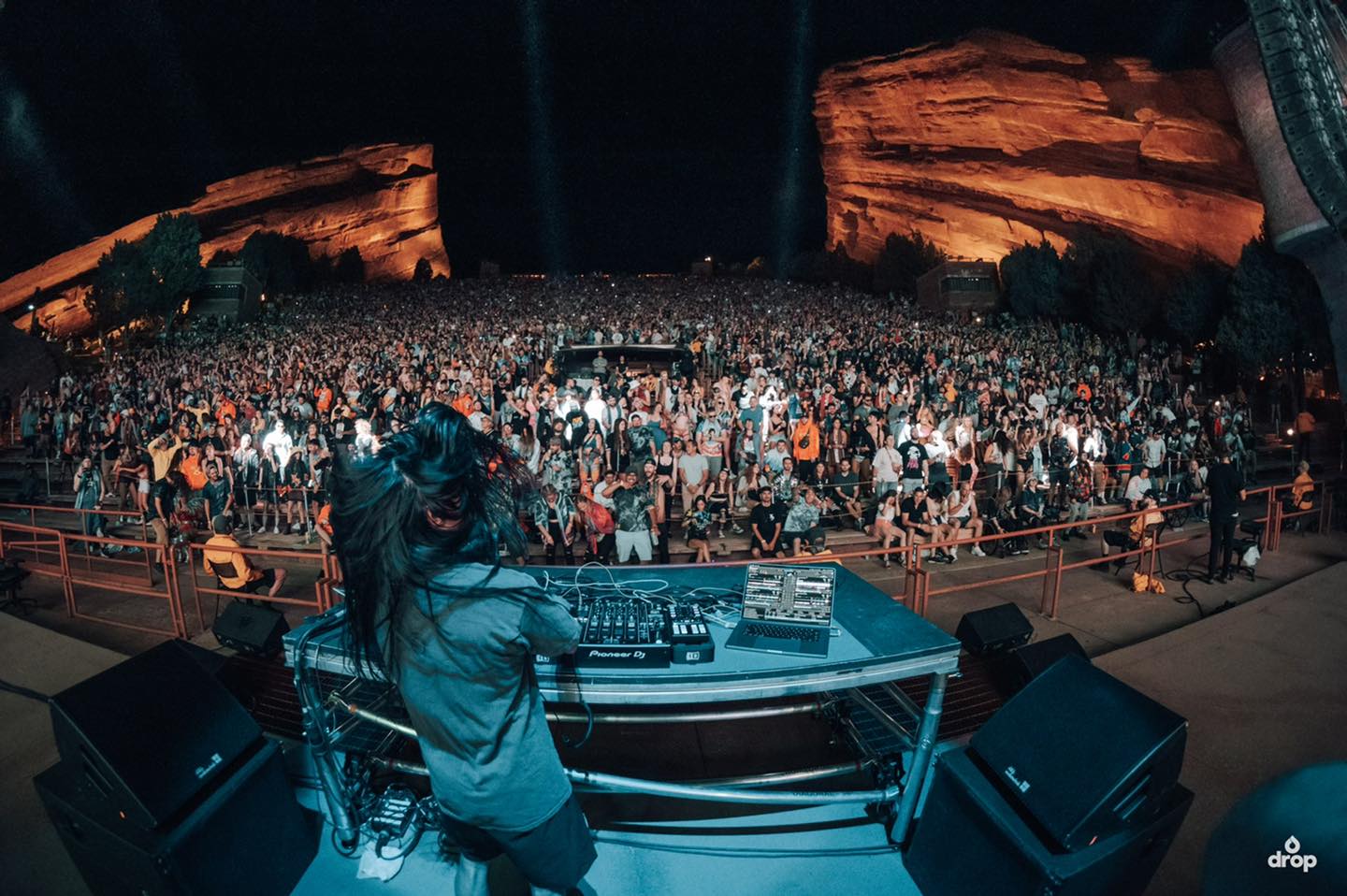 Following Mersiv’s explosive set, Zeds Dead played their first of five “Dead Rocks” sets (even though three of those sets weren’t actually at Red Rocks). From Beyonce to Mobb Deep, Zeds Dead’s catalog of remixes extend far beyond the normal pop and top-40 hits. His love for music runs deep, rooted in a genreless appreciation of timeless classics and hidden gems scattered throughout the catalogs of disco stars and rock legends. As great as Zeds Dead’s original music is — and it is great — what really makes their performances special is their diversity and willingness to think outside of the box. Beyonce and dubstep might not seem great on paper, but Zeds Dead manages to mix the most unlikely tracks into bangers each and every time. They also managed to throw in a healthy dose of throwback tracks, drum and bass and bass-house, including their recently released track “I Took a Ride.”

Night two continued to highlight Denver’s bass community with Kumarion, who recently moved to Denver to experience the celebrated music community for himself. Known for heavy-hitting drum and bass, Kumarion fit perfectly in the opening lineup that was, well, all drum and bass. There’s definitely a D&B wave building up in the EDM community, and it’s about to start barreling. Thankfully, Kumarion took an occasional breath to explore more bass-heavy tracks like “Want It” and “The Uprising,” which were remarkably refreshing after hours spent listening to 170 BPM drum and bass. As exhilarating as that fast rhythm is, dancing like a maniac running a marathon is only sustainable for so long. 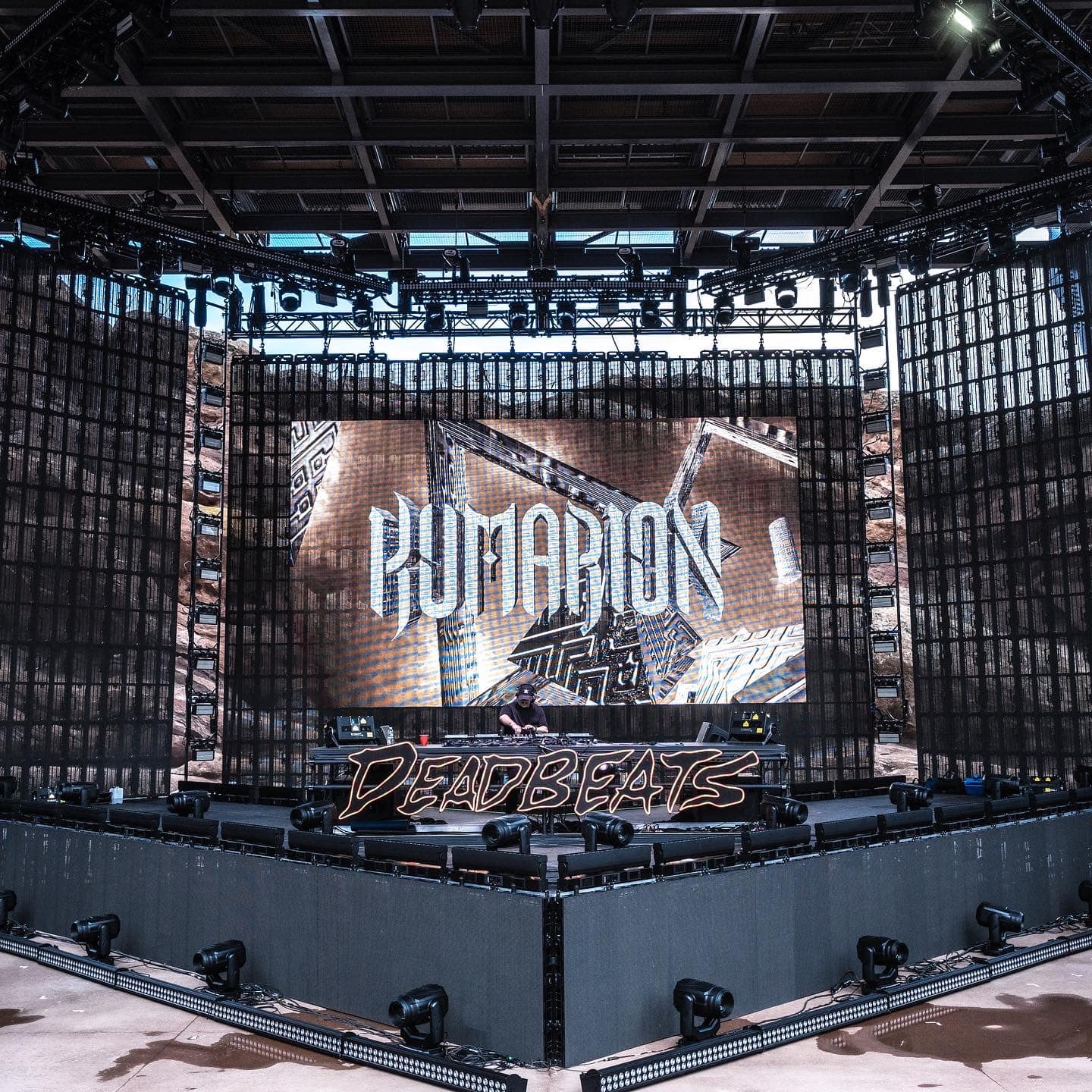 Zeds Dead finished off night two with a much more bass- and house-driven set, filled to the brim with more contemporary remixes that touched everything from Led Zeppelin’s “Dazed and Confused” and the Black Eyed Peas “Pump It” to Beethoven. Hearing hundreds of people scream “WOMP WOMP WOMP WOMP WOMP” to the rhythm of Beethoven’s “Für Elise” is something that will live in my head rent-free until my final days. He even played Biz Markie’s classic “Just a Friend” from start to finish if only to hear the crowd howl the chorus at the top of their lungs. 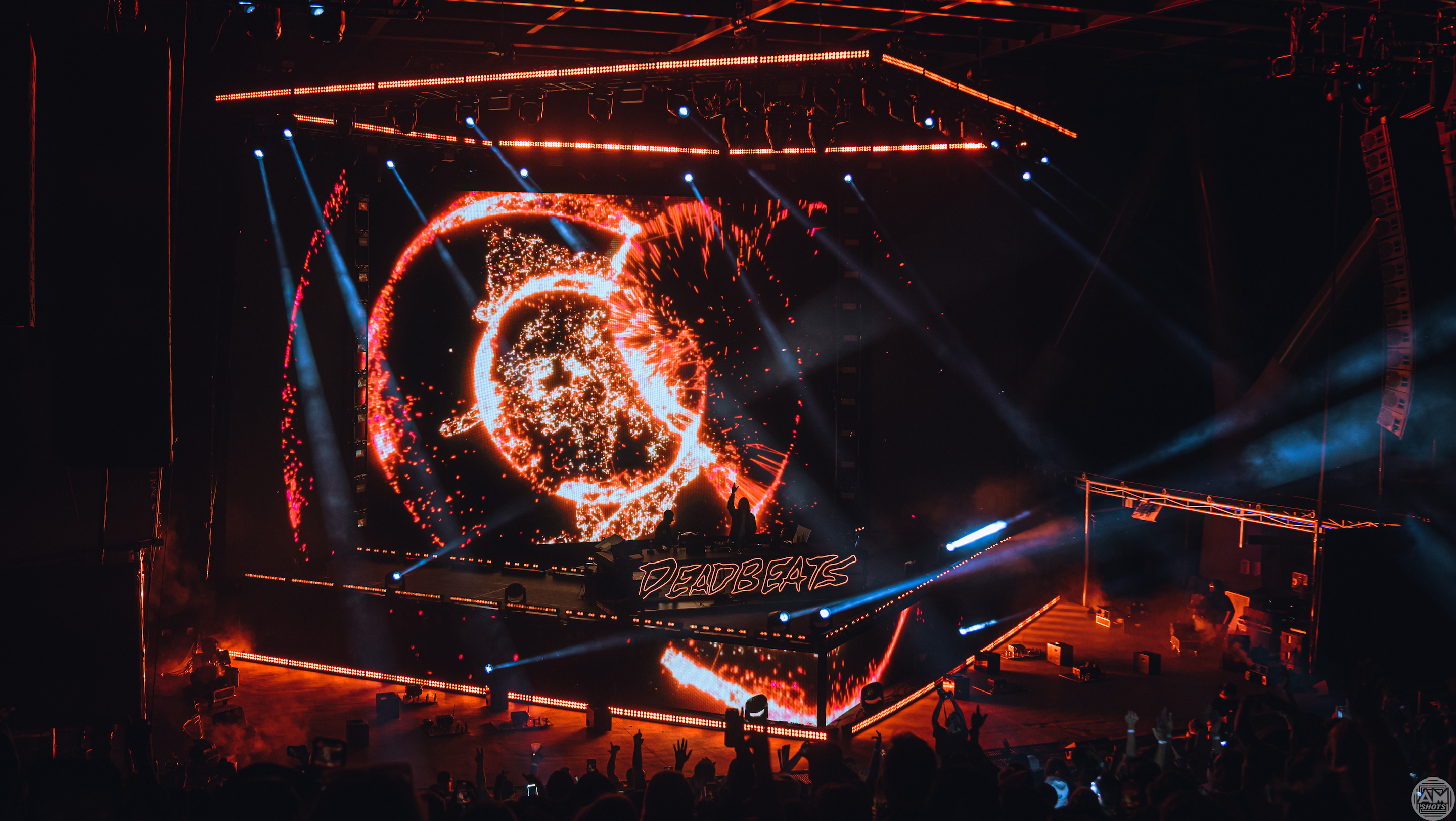 The Dead Rocks experience is about the bass community, through and through. And there’s no better bass community in the world than right here in Denver, Colorado. Zeds Dead showcased the local bass scene in more ways than just having A Hundred Drums, Mersiv and Kumarion on the lineups. For example, although Smoakland and Superave. — who performed at various points throughout the weekend — don’t live in Denver, they’re represented by Mind Warp Management and MorFlo Records, two musical entities based in the Mile High City. During Mondy’s 4th of July Jamboree, TVBOO — an up-and-coming bass artist and comedian with a popular podcast who recently relocated to Denver — joined his friends on stage to announce the annual hot dog eating contest and dance around while his homies dropped bangers through the afternoon. Zeds Dead’s final set of the weekend was performed back-to-back with Denver’s favorite bass artist, GRiZ. The list goes on and on. Zeds Dead is obviously proud of Denver’s dedication to bass music, and any bass fan should be too.