Sometime in the past seven or eight years, a trio of hardened street figures turned their corner of the country — Buffalo, New York — into a haven for hauntingly real storytelling. Brothers Westside Gunn and Conway the Machine kept it in the family, enlisting cousin Benny the Butcher to work together on their vision. What spawned was Griselda Records/Fashion Rebels — an all-encompassing creative outlet whose foundation roots in authenticity and head-spinning lyricism. Throughout their ascension to stardom, they each released no less than two to three projects a piece each year. When Kanye West enlisted Griselda on Donda 2 this past August, their ambitions were once again validated. In true Griselda fashion, the buck didn’t stop there, as the label decided to hit the road for the “Claire’s Back Tour” with fellow label-mates and close collaborators Armani Caesar, Stove God Cooks, Rome Streetz and Black Soprano Family, just to name a few, as well as Griselda’s crucial backbone, producer Daringer. And when the sprawling tour made its stop at Mission Ballroom Sunday night, they didn’t leave anyone behind. 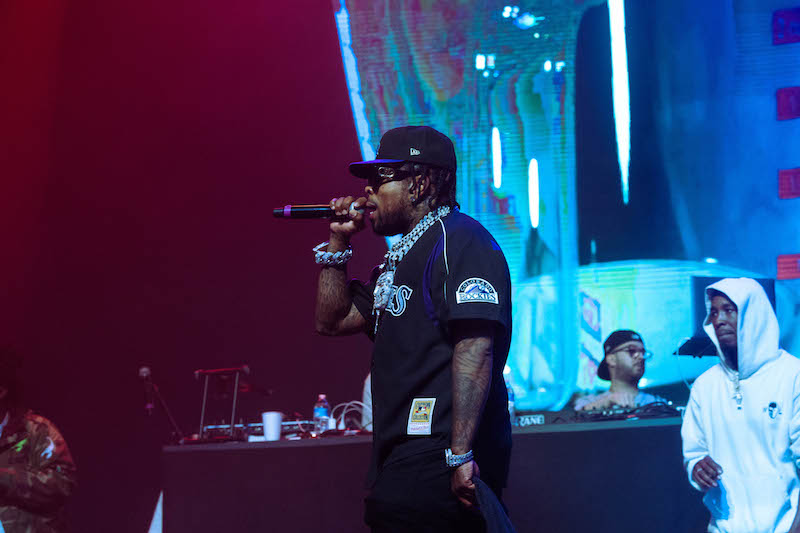 To start, Westside Gunn kicked the feature performance off with a number of records spanning double-digit mixtapes and studio albums. Gunn is a cult-hero to the core. His slow, cocky strut on stage paired perfectly with an overwhelming sense of confidence on the mic. “Just imagine being one of the best rappers and you don’t even like rapping,” he boasted, donning a Todd Helton jersey, a Rockies snapback and at least 70 pounds of glistening jewelry. His unwavering sense of self-belief translated into his music — Gunn rapped about “snatching bricks like Biyombo,” or “a [Rolls Royce] with no roof,” or “Dolce Gabbana on my A-like day and night.” Stove God Cookz and Rome Streetz joined Gunn for some of his best records to date. The breezy, 8-bit “RIGHT NOW” was polarizing by nature. In between flex-heavy bars, Gunn paints grim pictures of the hustling lifestyle. For example, when he raps, “Ayo, pissin’ ‘paigne from ’95 / Judge gave him so many years, a nigga rather die right now (Ah).” Stove God Cooks tore apart his section on “Jose Canseco.” On more than one occasion, Gunn asked the Denver crowd where he can get some weed. Hands popped up all over the horseshoe-style venue like a classroom, each with either a blunt or joint in tow. 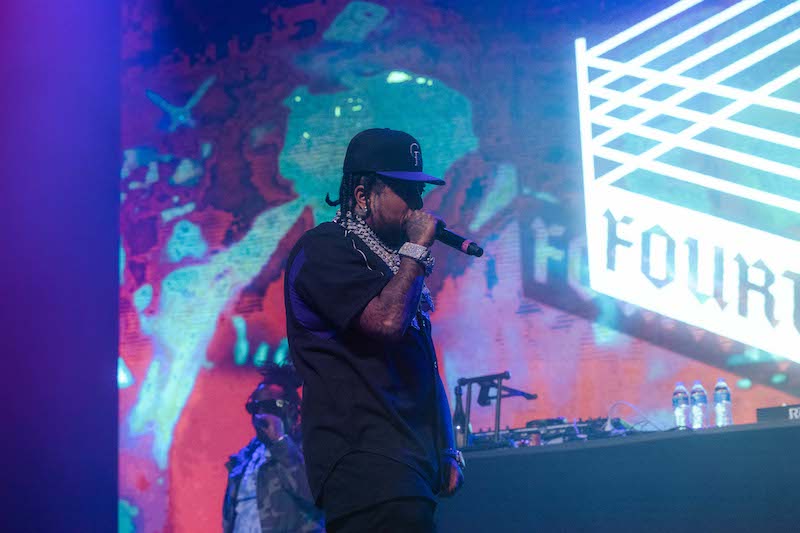 Armani Caesar hopped on stage with Gunn for a series of hard-hitting tracks off of THE LIZ, her 2020 project released with Griselda. Executive produced by Gunn, it’s laid heavy with looping samples. An unbelievably fly Caesar ripped them to bits with her mean, resounding cadence. While every artist on stage takes immense pride in their fashion choices, Caesar very easily took home the award for best dressed at their stop in Denver. She sported a fine leather trench coat covered in shining crosses. She blurted a capella a number of times, rattling off testaments to the streets with convictions in front of a video screen that showed her name engulfed in flames. Fitting. 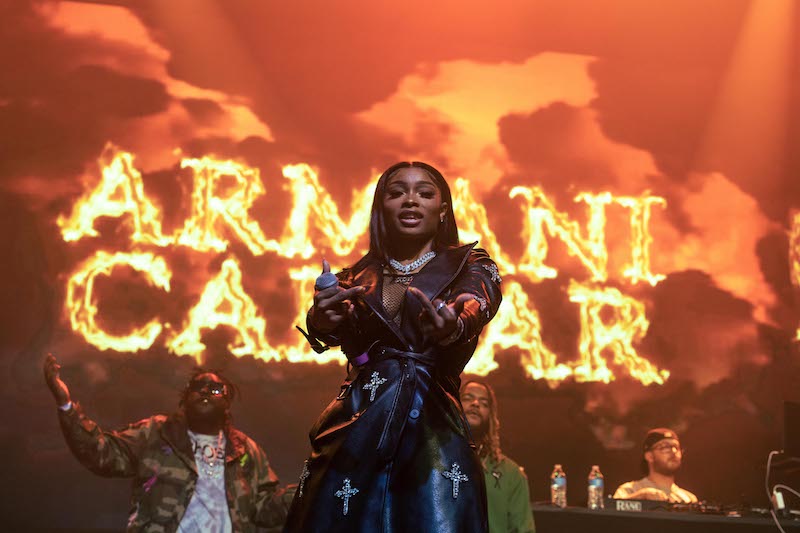 Benny the Butcher popped out one-third of the way through the show — a performance that would end up being nearly three hours in length — for “LOTTO,” a standalone single with screaming synthesizers that mimic organ keys. It was reminiscent of much of his work on Pyrex Picasso, yet another notch in the highly touted Buffalo emcees belt. Of the three primary Griselda members, Benny raps with the highest aggression. He spouted “kill or be killed, you know the vibe,” with an energy that the crowd matched almost immediately. On a two-headed record between Caesar and Benny, the pair traded bars with a flawlessness that’d make one believe they’d performed the song a million times before. Benny rapped directly at a few members of the crowd on his right who sported Buffalo Bills jerseys, and Caesar spit to a pocket of fans getting particularly hyped on her left. Benny jumped into his foundational album, the beloved Tana Talk 3 — regarded by many rap scholars as a modern masterpiece — where he most notably flowed over the menacing instrumental on “Rubber Bands & Weight.” After a brief acknowledgement of the Freddie Gibbs incident (allegedly an act performed by associates of the crew), Benny gave the fans a no-holds-barred performance of arguably his seminal track to date: “Crowns for Kings.” He rapped, “I sat back, a vet, and watched beginners winnin’ my belt / Burned my bridges, came back a good swimmer like Phelps.” It was a golden moment in a near-flawless show by one of Griselda’s figureheads. 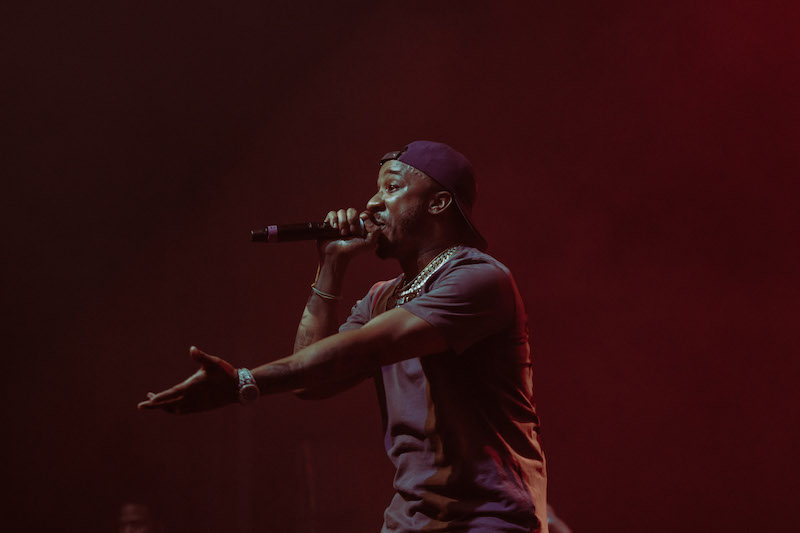 Quietly, with poise and swagger, Griselda’s X-Factor — The Undertaker of Buffalo’s syndicate — waltzed on stage “fresh off a hit of wax,” he’d later tell the audience. Conway the Machine is the big, scary motor that keeps the train chugging, and although he officially announced his departure from Griselda Records in late February of this year, nothing breaks the family bond. He’s a man of few words off the microphone, but when he snatches up the audio device, it’s bombs away. Conway elicited the biggest cheer from the crowd upon his arrival, like a dark horse finally making his entrance. He performed songs off God Don’t Make Mistakes, and at one point, he said, “talk about my face but you can’t say shit about the bars,” alluding to the cockeyed smile he has from being facially paralyzed after taking a bullet to the head years ago (yeah, really). He preached truth and realness all night, and rounded out his performance with tracks off LULU — another fan favorite. 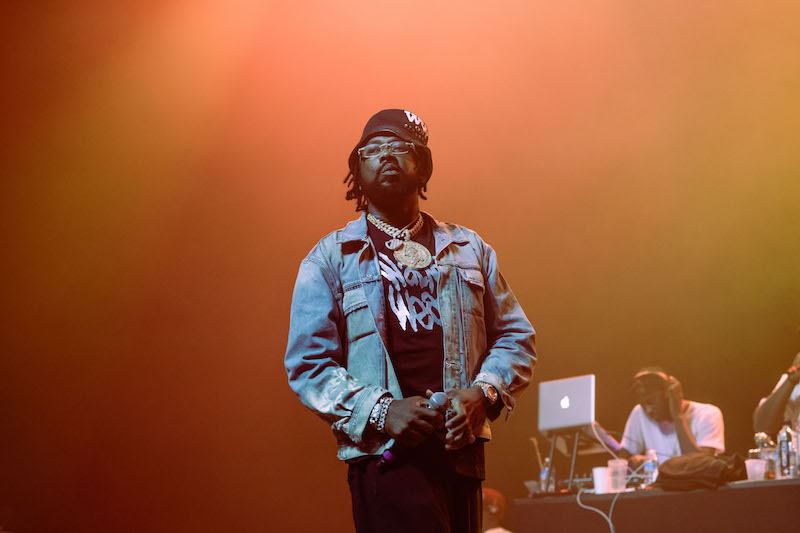 On more than one occasion during the Griselda performance, there seemed to be well over twenty different people on stage. Many weren’t performing at all but had a place on the stage in front of a crowd that was either smoking, head-bobbing or staring in awe at one of rap music’s coolest organizations. Griselda lives and dies by kinship and loyalty, and one Sunday night, they gave Denver a chance to join the familial gathering.