Hair serves a different purpose for everyone, whether it be a method of self-expression or embracing its true form. These differing interpretations of hair are what the Colorado Photographic Arts Center’s new exhibition is all about. Work from five different artists comes together in the six-week-long showcase, Culture of Hair. 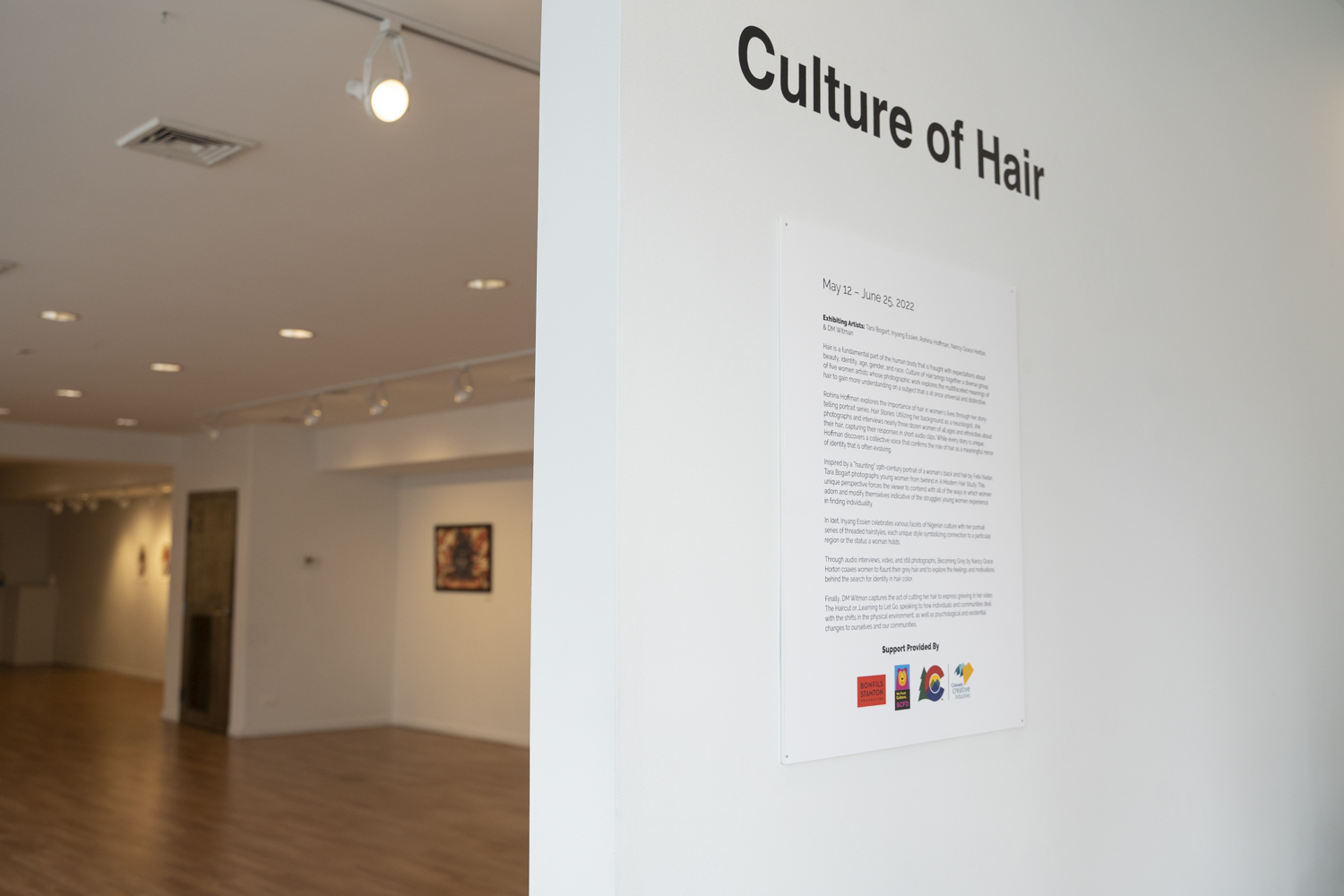 Executive Director and Curator Samantha Johnston constantly prepares for new exhibitions by seeking out artists at reviews or when artists submit their work. From there, she comes up with a theme and begins to pick out artists that she sees fit. To take full advantage of the 2,500-square-foot space, she usually groups three to five artists together.

“I feel like it allows us to have a larger reach, both in the community and that side of the outstanding community around the country,” Johnston said.

The idea for the Culture of Hair was sparked as Johnston was looking at artists’ work and feeling like it related to topics circling in society today. 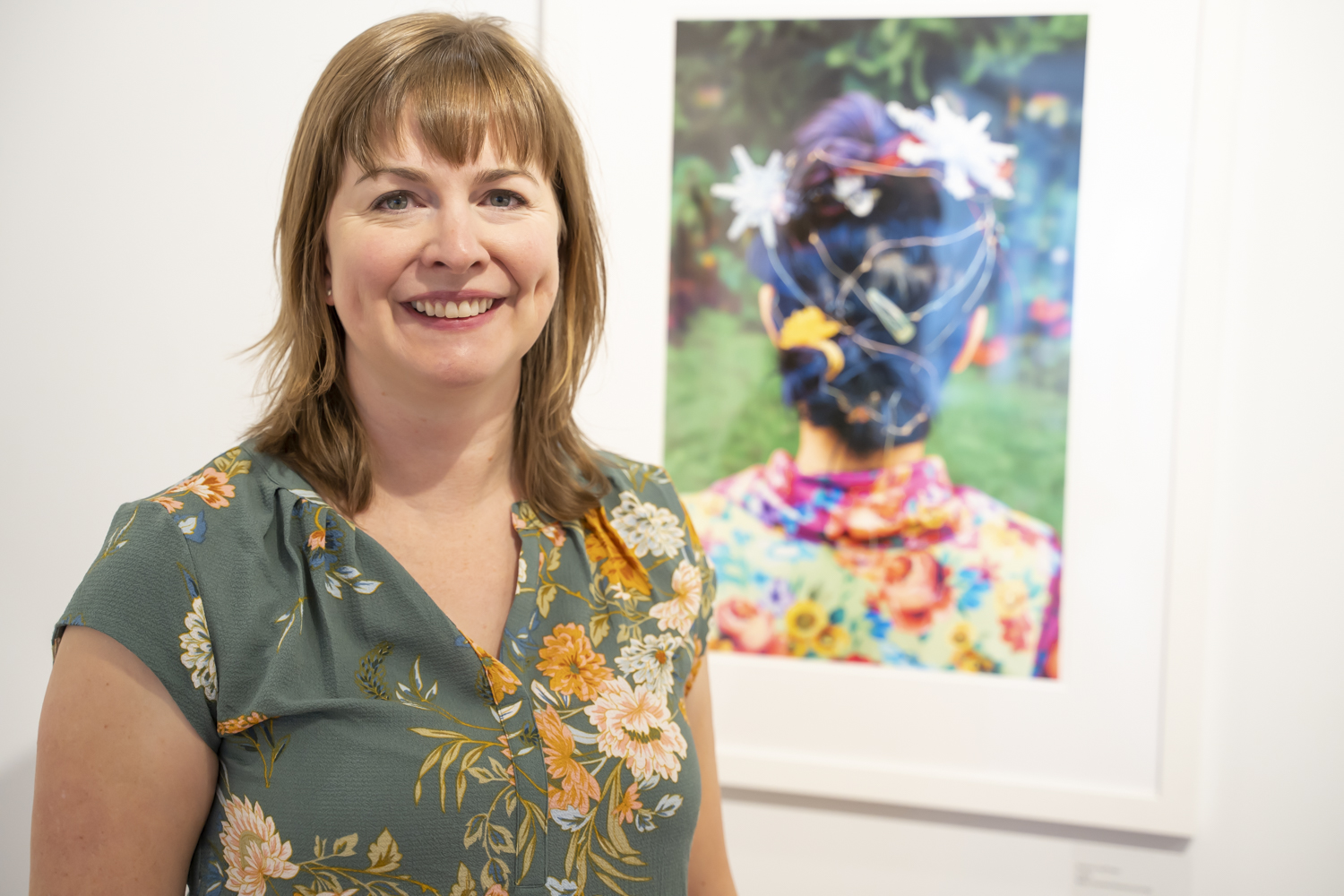 “Hair is something that affects everyone, women and men, but I feel like, for women, in particular, it affects us in a different way,” Johnston said. “How we look, going gray, all of these different challenges that women face in society and how it affects our lives. That was something I feel like all these artists really touch on.”Each artist touches on a different topic relating to hair. Here is who’s work you’ll see as you stroll through the exhibition.

Rohina Hoffman is a photographer based out of Los Angeles, Calif. Her project, Hair Stories, came about as she noticed hair inadvertently appearing in her work. From there, she asked why she felt she was drawn to hair and what it meant for her.

“I had my own hair story from childhood, which then paved the way for me to start asking other women about their stories,” Hoffman said.

Each interview began with the open-ended question, “tell me about your hair.” From there, interviews ranged from 20 minutes to an hour and a half, diving into the stories and meanings behind each individual’s hair story.

There are a total of 37 women in the collection, all with different ethnicities, religions and backgrounds. Ages range from 14 to 100 and most subjects live in or around Los Angeles. Eight of the portraits were chosen for the exhibition. Accompanying each photo is a QR code where viewers can listen to the interview.

“In doing this project, I learned a lot about the different meanings of hair to different individuals, the power behind it, how it’s a metaphor for identity, feelings, control, and also acts as a social-political and can even be a religious construct,” Hoffman said. 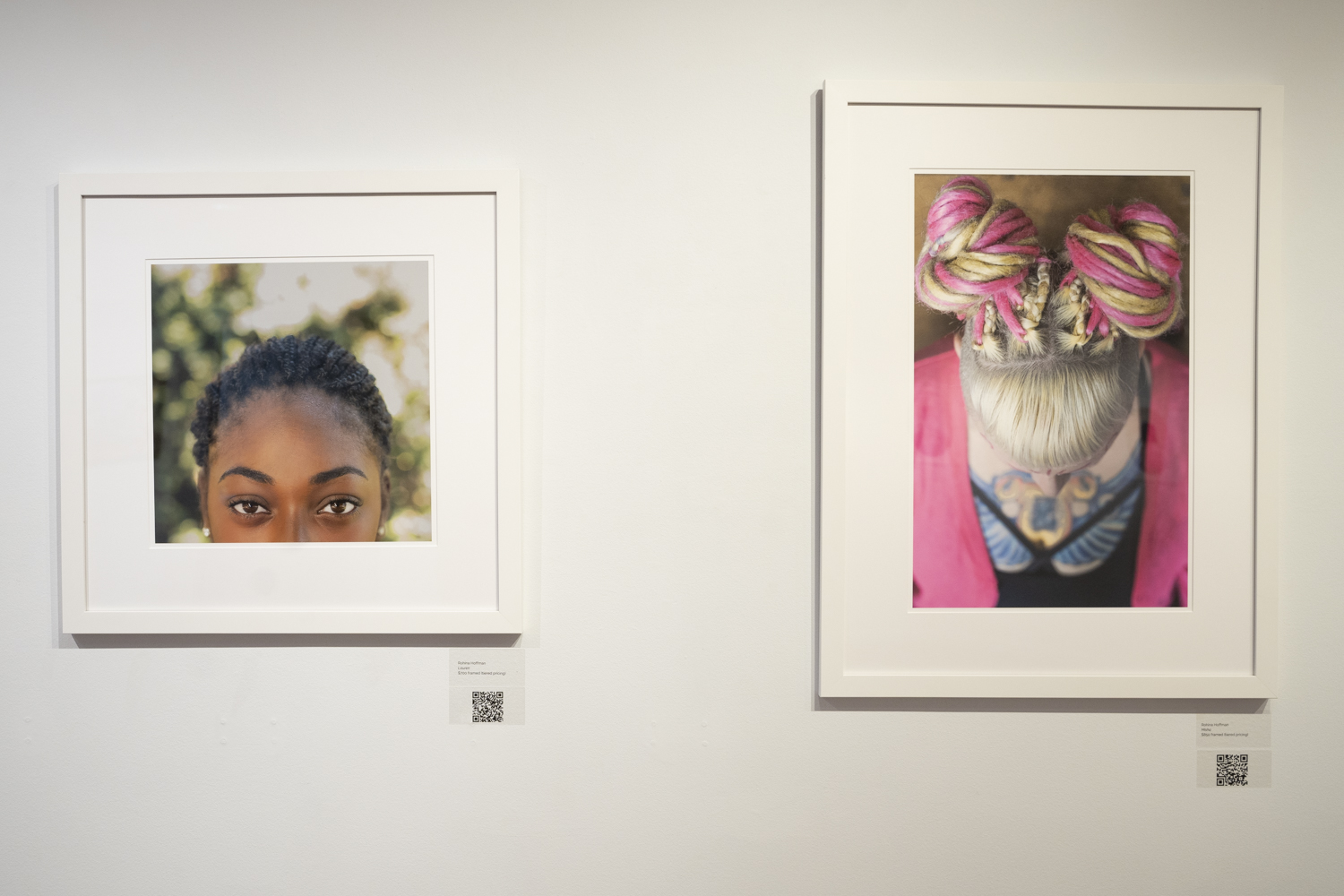 When Tara Bogart first went to France in 2011, she visited the Bibliothèque Nationale de France and was instantly drawn to portraits by famous photographer, Nadar. An image of a woman’s back stuck out to her, and years later, she was inspired to create images of what she thought that photo would look like today.

Before each portrait was taken, Bogart avoided touching the subject’s hair at all. She aimed for the photos to be natural, as if they had walked out on the street, then had their photo taken.

“When you look at the women, some of the things that I find very fascinating about them is that nothing ever repeats,” Bogart said. “Every time you take a photograph of another woman, they’re so uniquely themselves. They’re so uniquely different and we don’t have to look at their faces.

The photos featured in CPAC are the more recent additions to the collection, taken when Bogart did an open call in an art hotel for people to come and pose for one day only. The response was extremely positive, with 61 women showing up.

“I was overwhelmed by how many people were standing outside waiting to have their portrait taken,” Bogart said.  “I felt very honored by that.” 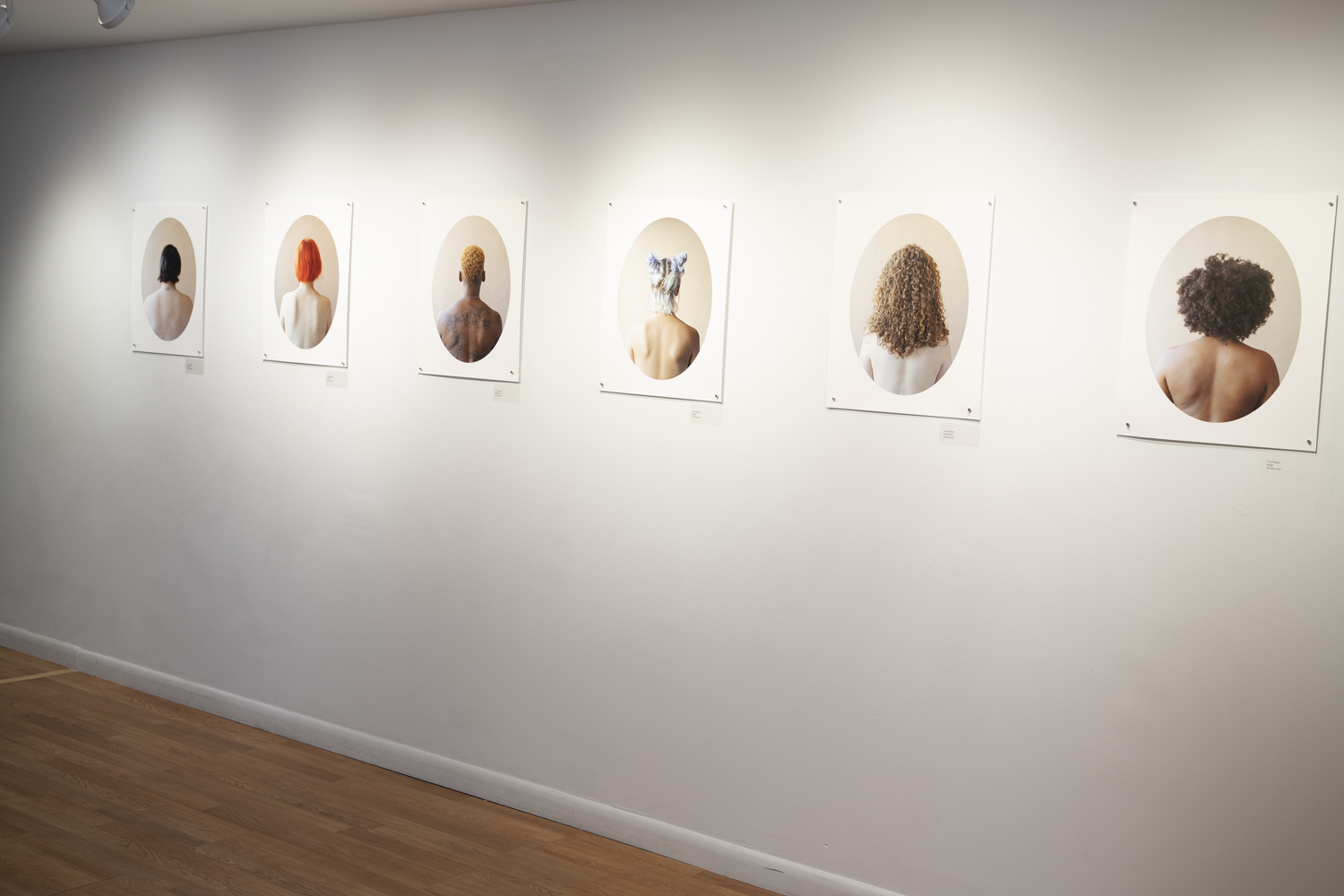 The title of Inyang Essien’s work translates to “hair” in Ibibio, a Nigerian language that her parents speak. Her collection, as she describes, is “heavily influenced by culture,” and each photo is representative of prominent Nigerian styles between the 60s and 90s.

“I began to look into these hairstyles and exactly what they meant,” Essien said. “Different hairstyles speak to identity … I really wanted to showcase different styles in my own way and add another element of culture.”

While some photos hold great meaning about Essien’s life and past, others are simply inspired by shapes. Every piece is placed intentionally, including the parting of the hair. Meanings behind each photo also extend to their backgrounds. For example, some use wax-based textiles, prominent in Nigeria and other African nations.

“These hairstyles aren’t just things that I’ve come up with myself, I’m still trying to pay tribute to culture,” Essien said. 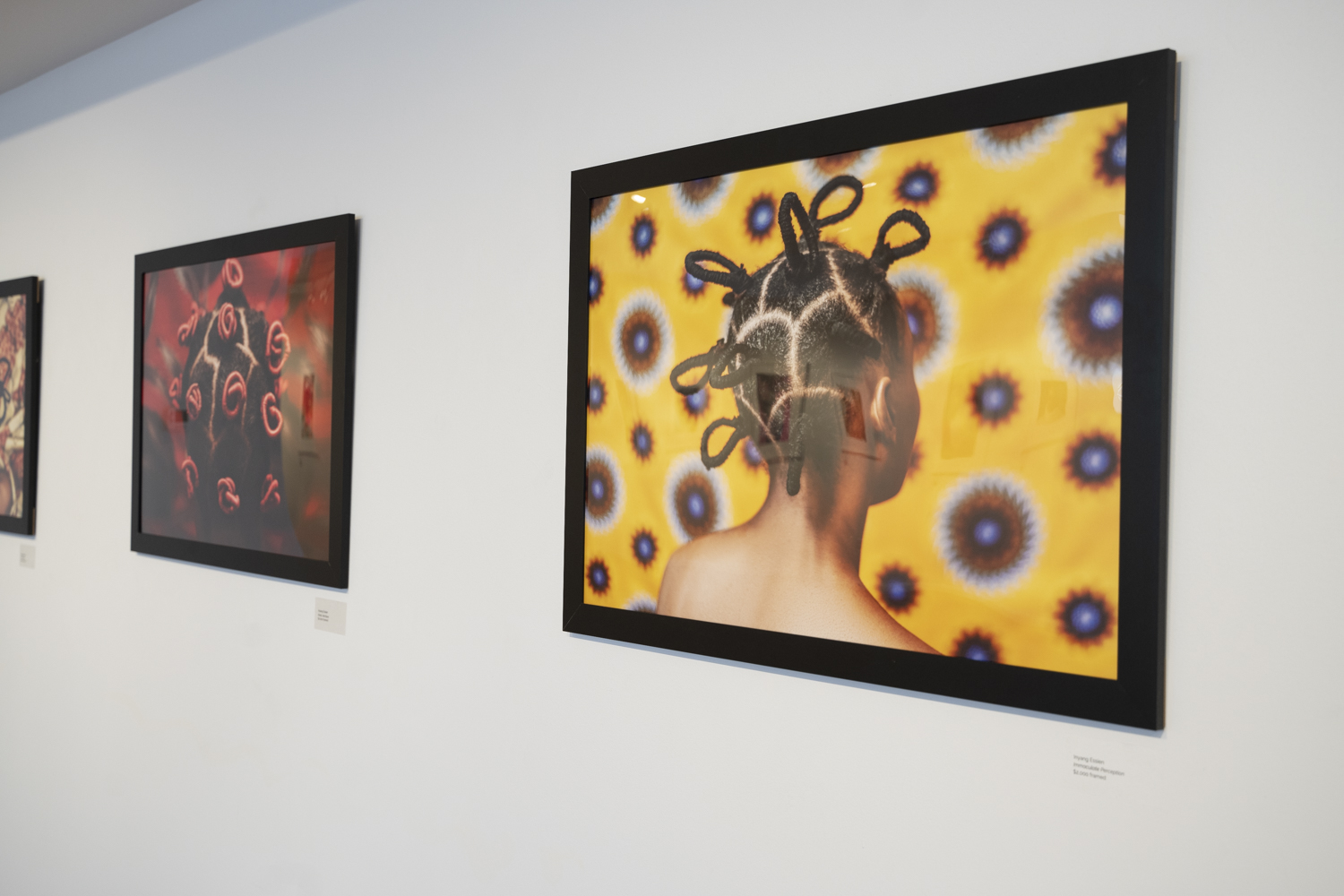 Inspiration for Nancy Grace Horton’s collection stems from a story of when she lived in Aspen, Colo. in the 80s. Her roommate at the time was expecting their parents to come to visit. As they walk in, Horton notices the woman, not much older than her, with salt and pepper hair and a great deal of confidence.

“She just became my forever role model,” Horton said. “That was sort of that point where I just felt like I was committed to just letting my hair be natural after having seen her.”

Horton aimed to highlight the attitudes towards people about their grey hair, such as how some jump through hoops to conceal their roots or stress over a few silver hairs that pop up. It also points out the differences between men and women and how women typically don’t receive the same praise that men do when it comes to growing older.

When the idea went into action, it was at the height of COVID, so Horton struggled to find subjects. Through a Facebook post, she gathered 50 people who were interested in participating.

“Women have really responded and have wanted to tell stories and the stories are devastating and they’re funny and empowering and so they’re covering such a vast experience of what women have experienced becoming grey.” 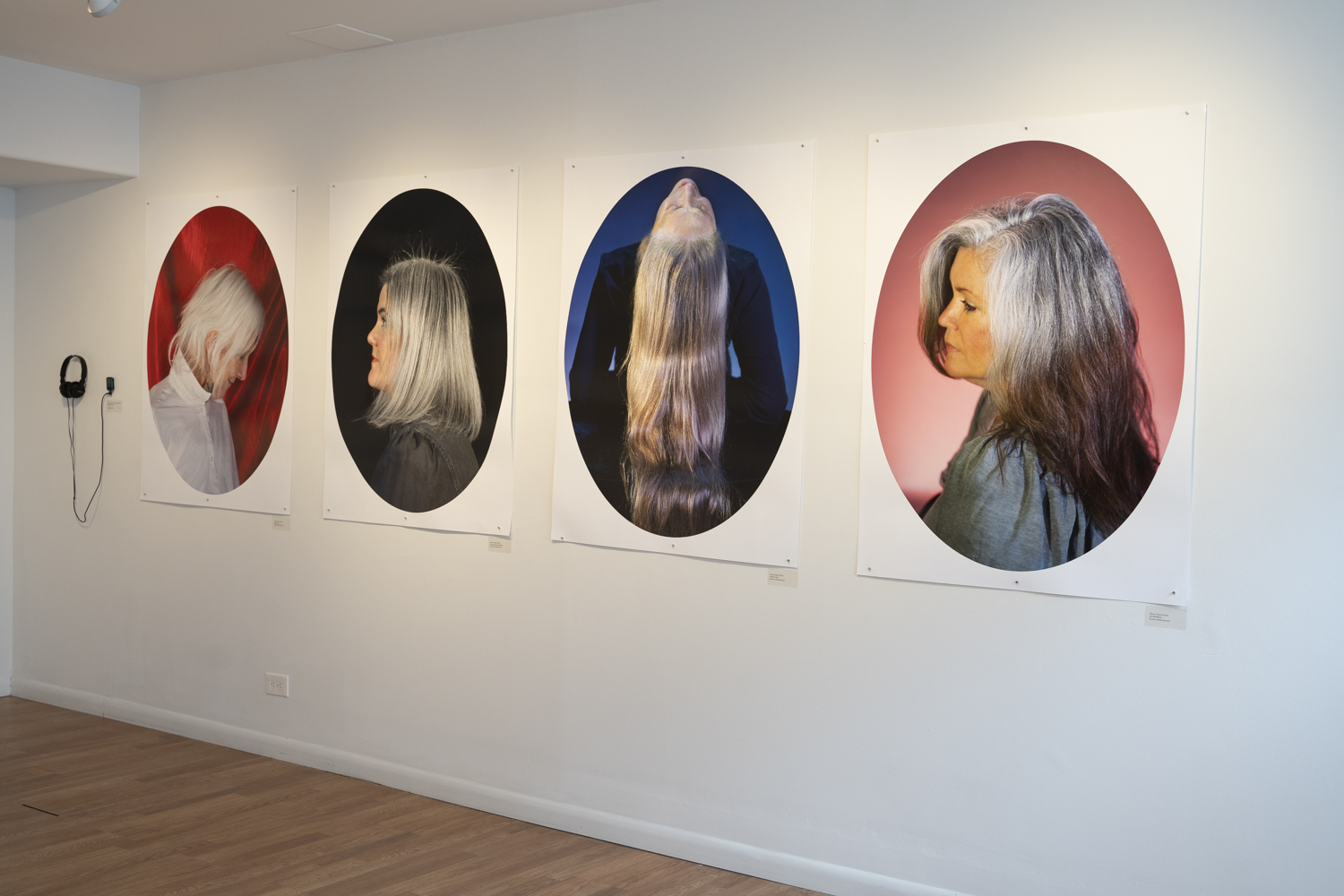 The Haircut or… Learning to Let Go by DM Witman

DM Witman’s piece is unlike the others, as it was communicated as a video. The idea was brewing pre-pandemic and because the video was created solo, Witman was able to carry out the project in full force.

In many cultures, there is an idea that cutting hair is an expression of grief, so Witman’s interpretation was cutting her hair as a method of dealing with ecological grief.

“My hope was just that maybe the extreme of going to this action of cutting and then shaving, perhaps someone else might be freed a little bit,” Witman said. “To recognize if they’re struggling with something, that it’s okay. Grief is natural, it’s part of life.” 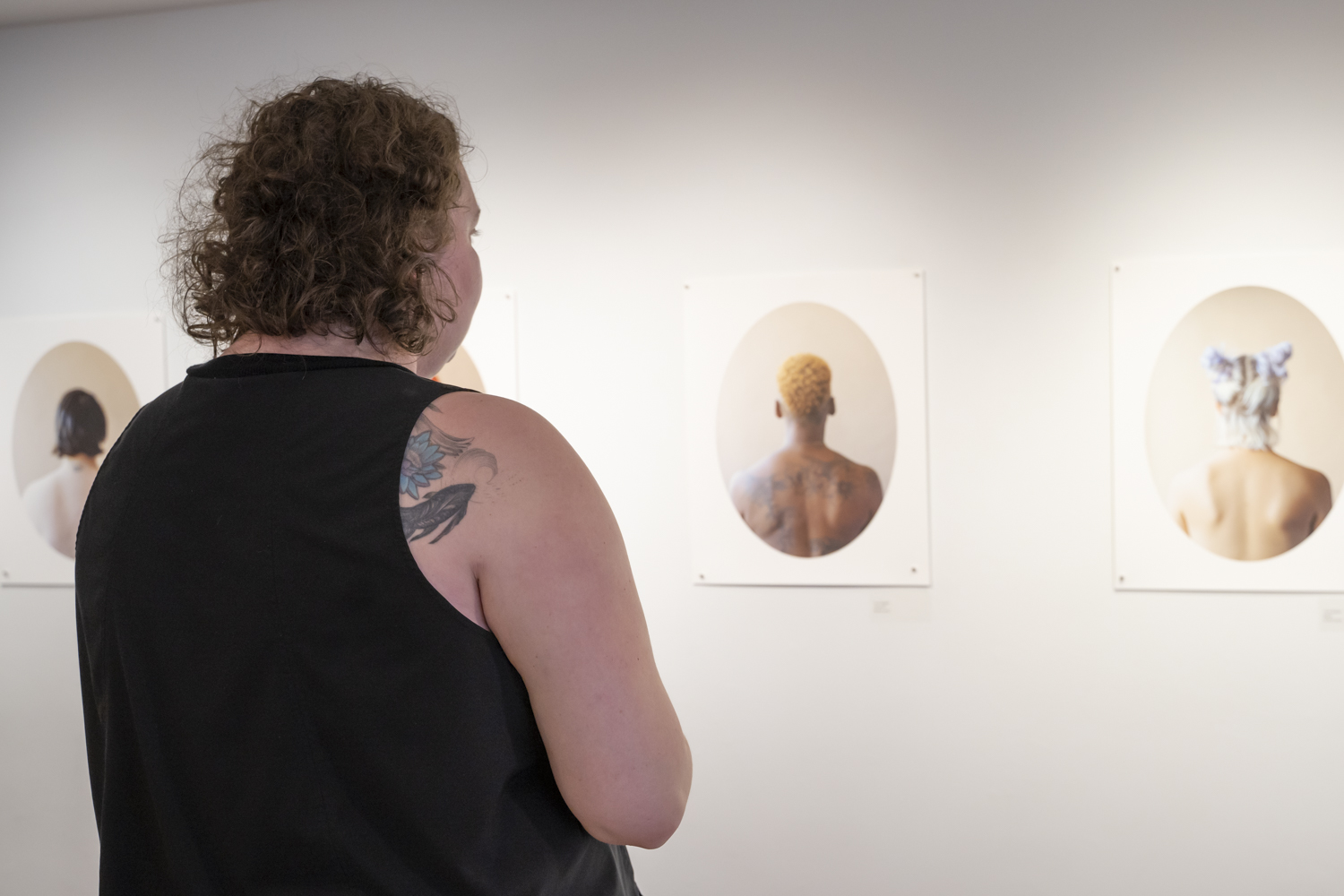 Culture of Hair expresses the multitude of ways hair can hold meaning or be interpreted in society. The artists in the exhibit come together to show all different aspects of individuals’ relationships with their hair and how it represents their unique identity.

The exhibition opened on May 12 and will run through June 25, at 1070 Bannock Street in the Golden Triangle Creative District.