Ben Roy Is Taking Over Comedy Works This Sunday, And You Should Be Worried

If there’s one thing comedian Ben Roy is known for, it’s keeping his crowds on their toes.

“I’ve always loved if the crowd is a little nervous that I’m going to come at them. They should worry a little bit,” he joked. “Finding somebody who looks uncomfortable and taking the show to them, it makes the whole experience so much more fun and enjoyable for everyone else there. That’s the way comedy should be seen: upclose, personal, intimate.”

A legend in the Denver Comedy Scene, Roy will be returning to the stage that gave him his start this Sunday, recording his first hour-long special with 800 Pound Gorilla Records at Comedy Works Downtown. 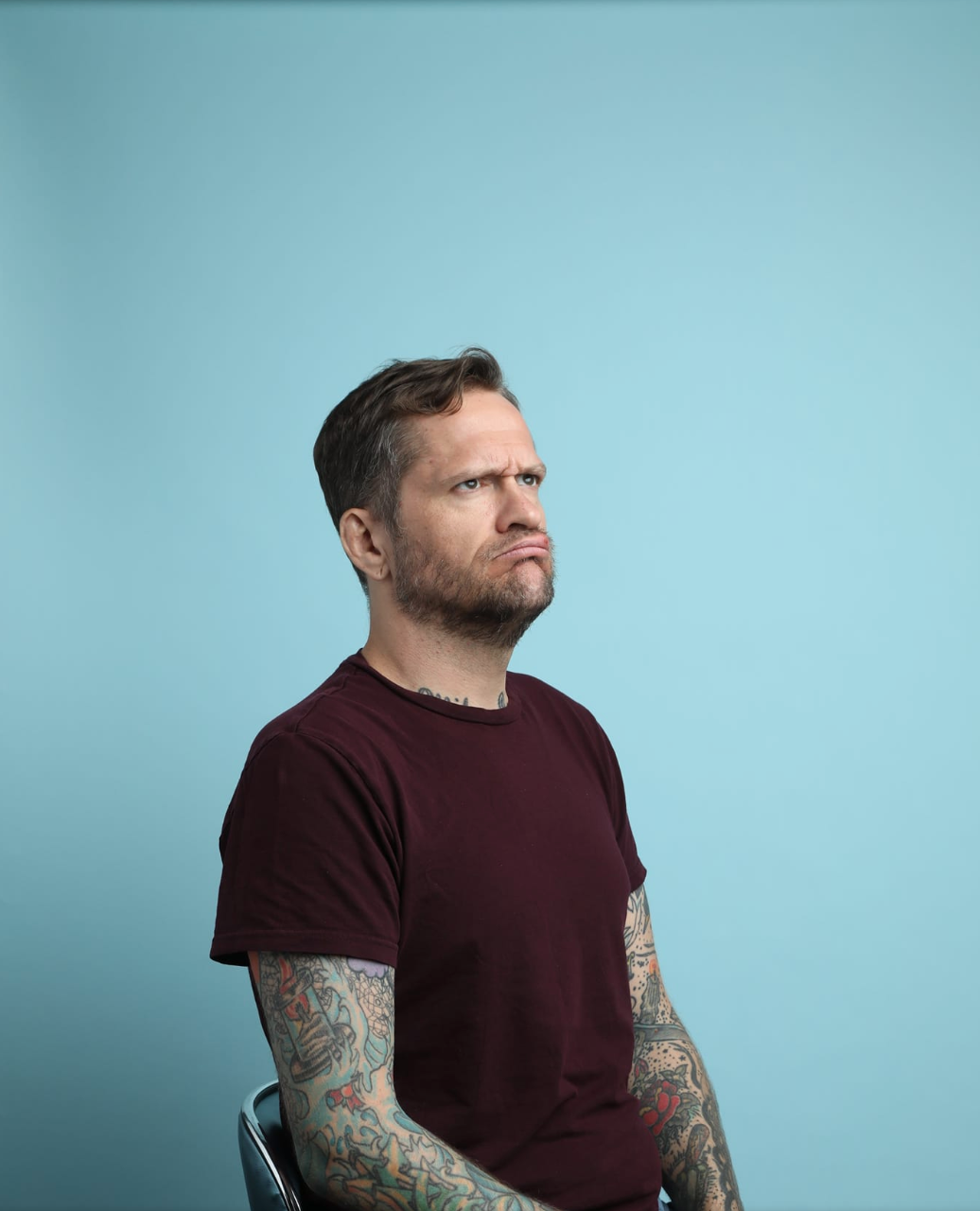 Originally a Maine-based musician, Ben Roy made the move out to Colorado in 1999, following a bandmate who came for vacation and never went back.

“I came to visit him and was immediately like I’m never leaving,” Roy said. “I like the people, I like the landscape. I had never seen mountains. I’d never even been out west before. I kind of fell in love with the whole vibe out here. I like Coloradans, they’re so much more laid back.”

Pursuing a career as a musician, stand-up had never been on Roy’s radar. Aside from the occasional comedy show and a Bill Cosby record, he was never particularly enamored by the comedy scene.

“I never once thought of being a stand-up comic. I actually went to a couple of stand-up shows, and really didn’t think anything of it. I actually thought it was kind of cheesy,” he said. 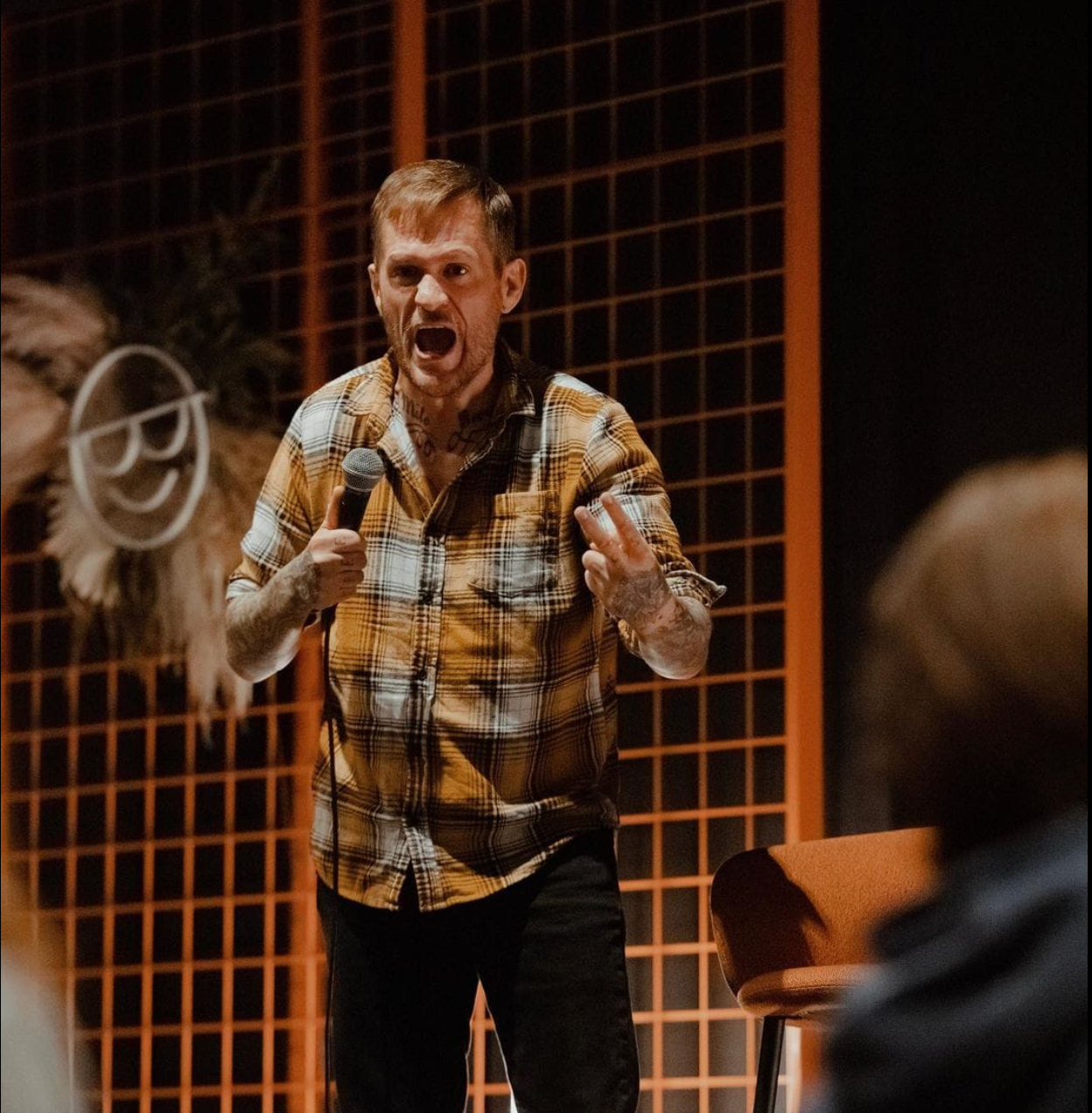 Roy’s transition to comedy can be credited to his wife, whom he met on a trip home to Maine in 2001. Moving out to Colorado with him, she got her first job as door staff at, as fate would have it, Comedy Works Downtown.

“That just put me in the sphere of everybody that worked there. I fell in love with it,” he said. “Once I started hanging out at Comedy Works, I got to see people like David Cross, Daniel Tosh early on, Maria Bamford. All of these kind of bigger comics that were not those sport coat-type comics…It was edgier. That was when I was like ‘oh this can be really cool.'”

Becoming friends with the Comedy Works staff, Roy was persuaded by a manager to try his hand at stand-up. Signing up for New Talent night, his music and theater background gave him the confidence needed to get up on stage. All he needed to do was craft the material.

“There are two types of people who do their first stand-up set,” Roy explained. “There’s the first type who try it and the minute they get up there they immediately think ‘I made the biggest mistake of my life.’ Then there’s that second group who kind of bombs and it’s definitely terrifying, but they just get bit by it. They want to figure out the puzzle of how to make a large group of people laugh consistently. I think I fell into that one…I immediately was like ‘how do I get really good at this.’”

Roy took inspiration from his fellow Denver comics, performing alongside local talent like Josh Blue, Chuck Roy and Lewis Johnson. He credits his success to the Denver Comedy scene, a small but mighty community that allowed him a crash course in mastering his craft.

“We all started [in Denver] with three major clubs — there was always talent coming into town. We all got to open for and get to know comics coming in. We got to see a lot of it, and actually get on stage,” Roy said. “It’s a funny first place. But over anything, it’s ‘Are you funny? Can you do a lot of time?’ Because there’s more stage time, not just in how often you can get on stage, but the amount of time you can do. Denver makes very strong comedians.” 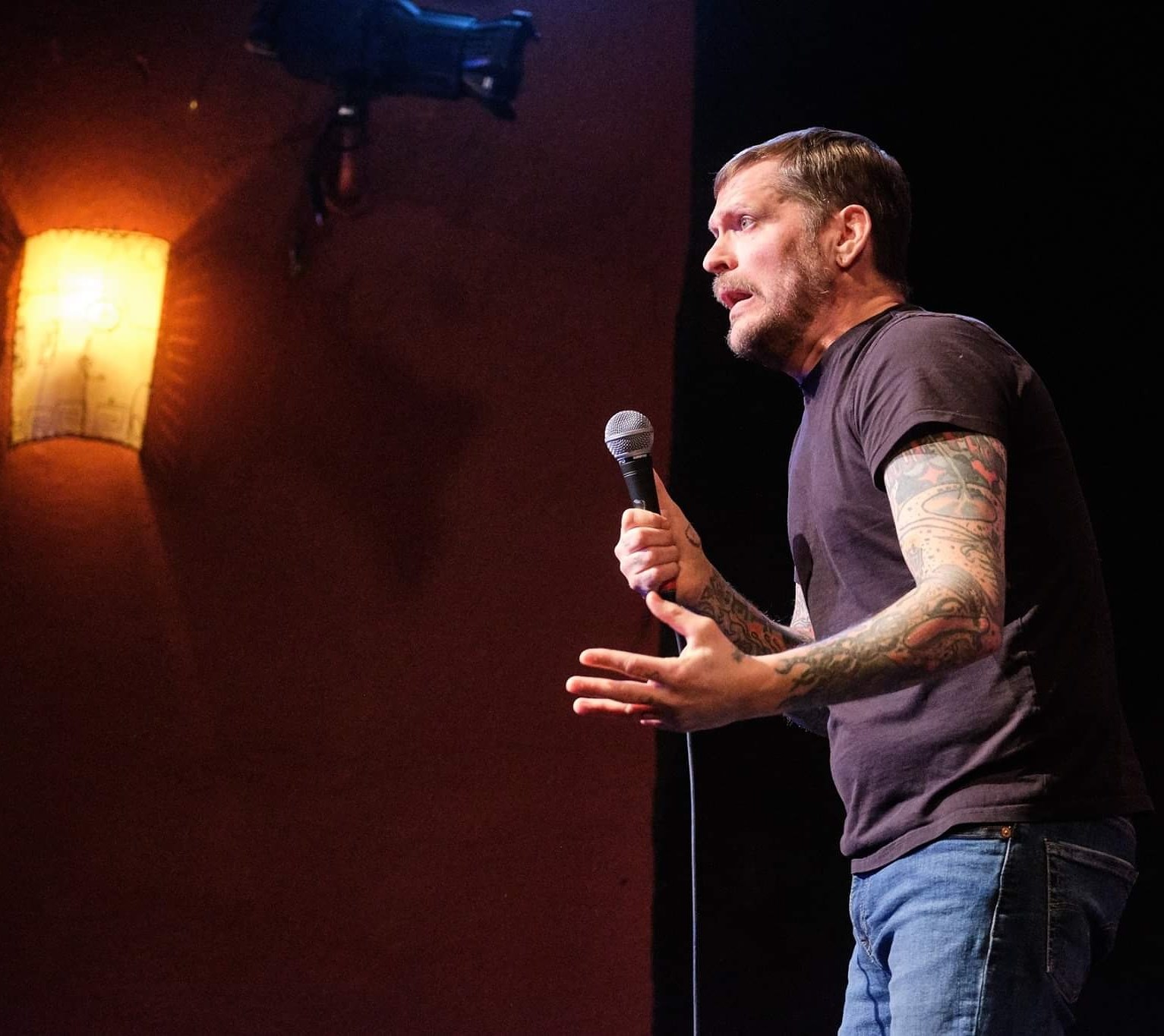 Still performing in bands, Roy took a short hiatus from stand-up due to his battles with addiction.

“I was an alcoholic. I was getting into trouble, I was getting drunk on stage, it just didn’t bring out good things in my personality,” he said. “At that time, I was struggling with a lot of stuff personally. If you are a damaged ego and a damaged person, and you get a little bit of adulation from a large group of people, you just become worse.”

It wasn’t until he got sober in 2010 that Roy began to see stand-up as a career. Sobriety allowed him to fully get bit by the comedy bug, and unlock an entirely new side of his on-stage persona.

“I was very angry when I first started because I was very angry in general. When I got back on stage, I tried doing the same old song and dance of ‘angry,’ but I just wasn’t as mad. I was more anxious and nervous than I had expected to be. When you quit drinking and doing drugs, you don’t feel better instantly, you feel worse. Everything you were trying to cover up is now just roaring in your ears. It was insecurity, but it didn’t come out as anger without alcohol. It came out goofy. I had to start being more myself, talking more vulnerably about things. I’m more of an emotional pinwheel, I kind of just oscillate between crying and feeling passionate and laughing like a jackal. It got me to become more honest and raw about things,” he said. 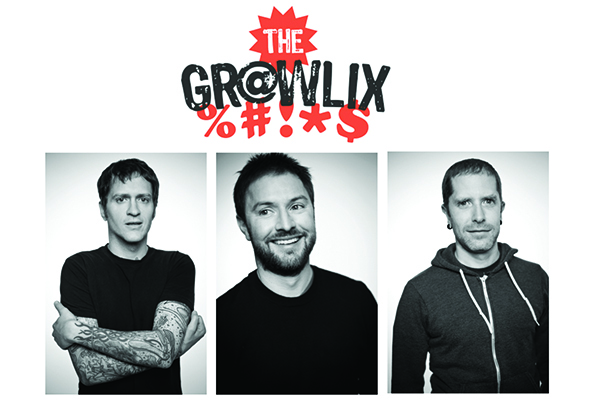 It was around this time that Roy connected with comedians Adam Cayton-Holland and Andrew Overdahl. The trio would go on to form the infamous Denver comedy trio The Grawlix, as well as create and star in TruTV’s Those Who Can’t.

“The only reason I came back to doing stand-up regularly was because of Adam and Andrew,” said Roy. “For the three of us being so different, it just worked out because we all work really hard…I don’t get sick of them. They are genuinely my friends, we’ve always had a very democratic way of doing things.”

In addition to The Grawlix’s’ success, Roy’s comedy career has allowed him to perform on HBO, Comedy Central, and MTV, as well as being named one of Variety’s Top 10 Comics to Watch in 2015. With three comedy albums already released, Sunday’s show will be a live recording of his first one-hour special.

“It feels more scary, more nerve-wracking in a way, even though the stakes are totally the same. It feels different when you know people can actually see you,” said Roy. 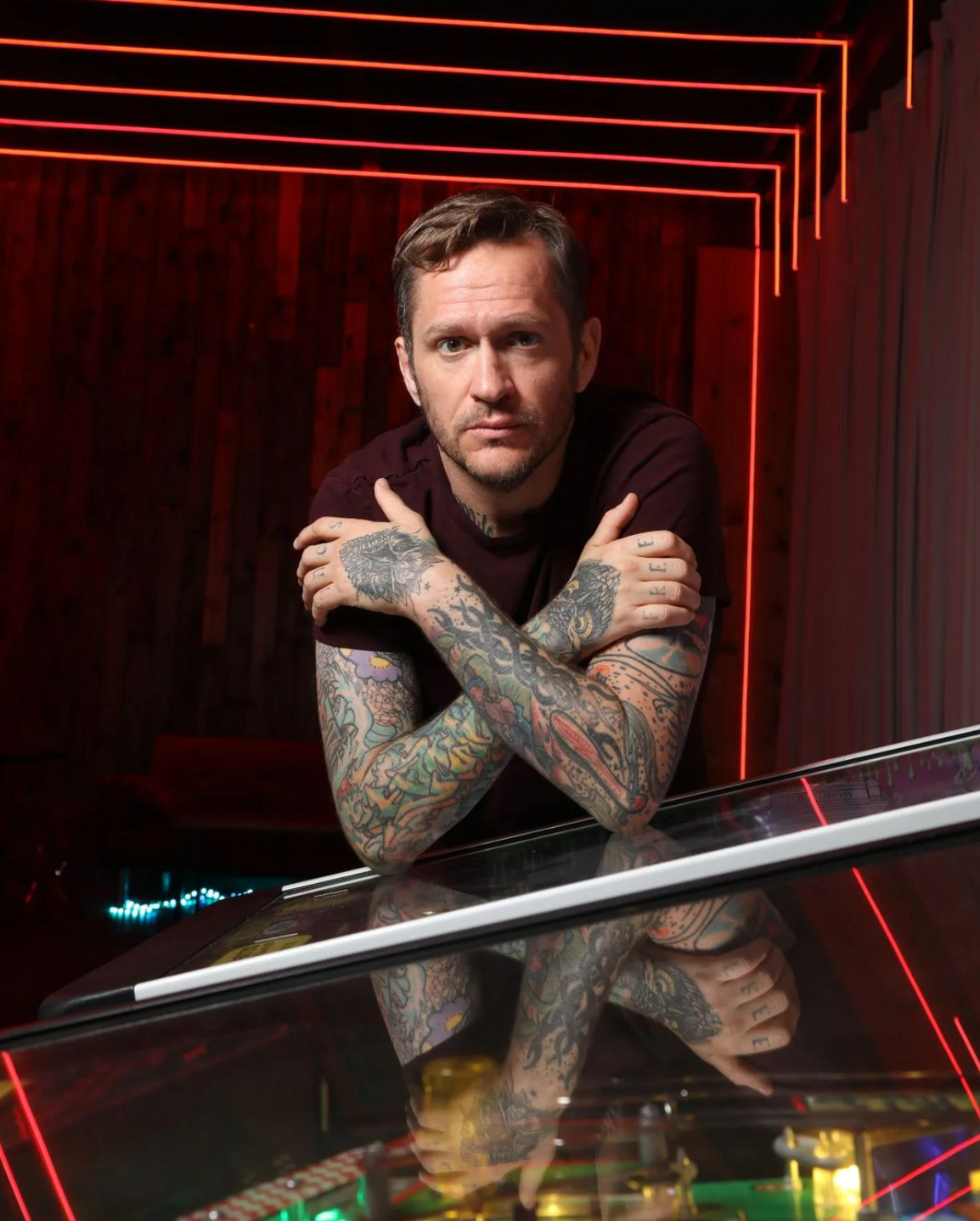 Like his other specials, this show will be a passionately honest and real take on the world around us. Tackling topics like COVID, vaccines and even just general happiness, Roy sees his work not just as comedic relief, but as a means of sparking discussion.

“In this one, I’m kind of talking about loneliness. God, it sounds depressing when I say it like that. But it is fun!” Roy said. “There’s a theme about loneliness and everything that’s transpired recently. How it’s shaping everything…I think the world is heavy, and it’s not letting up. Comedy shows are a great way to think about and process things in a very low stake environment. Have some of your ideas challenged… Comedy is the avenue to talk about those things, to start thinking about them.” 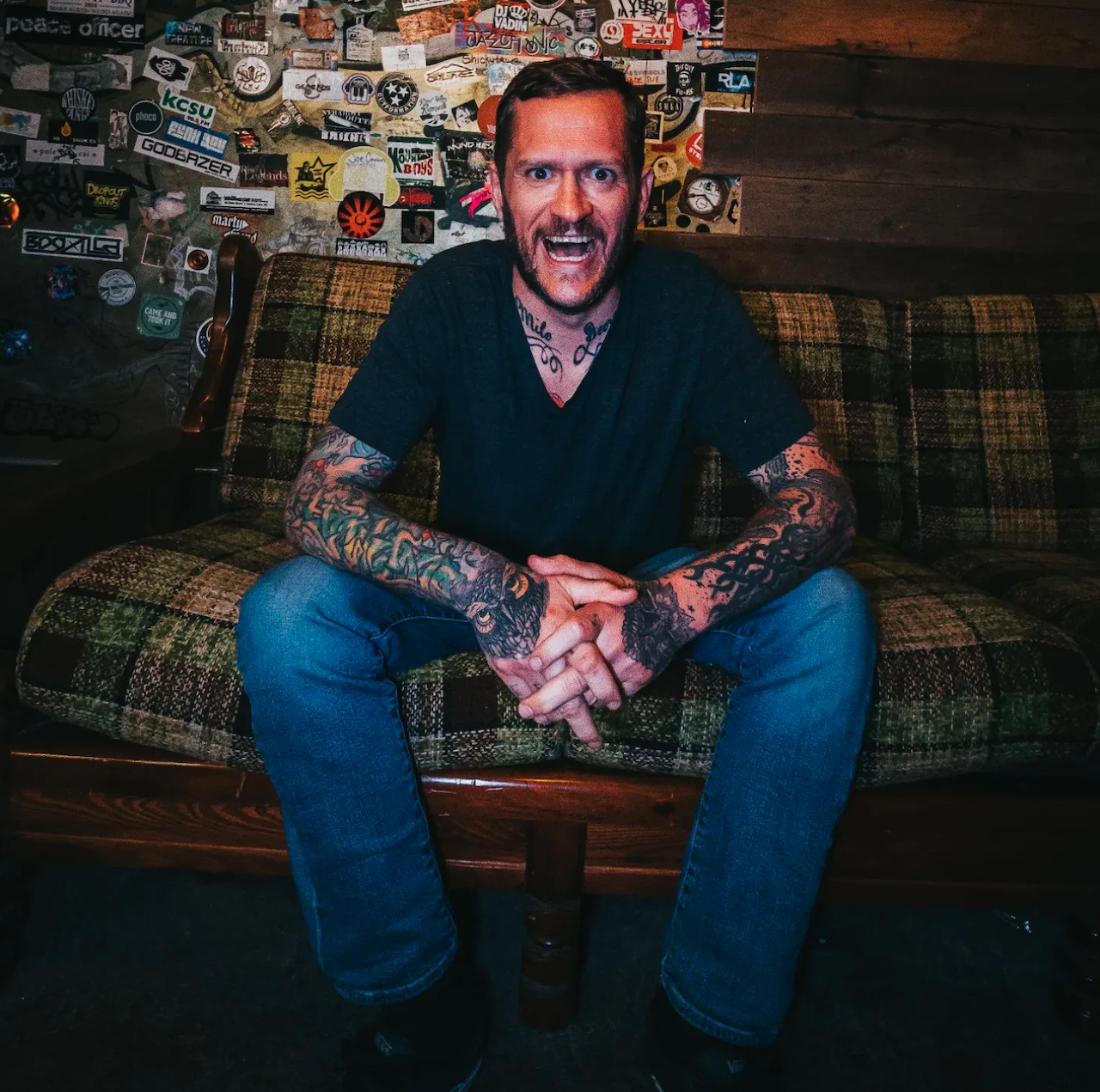 The special will be filmed on the same stage Roy got his start, commemorative of the strides he’s taken, both personally and professionally, since that first New Talent night. When asked if he even considered anywhere else for the filming, Roy gave a stern, flat-out no.

“I’m definitely in your face at times. I tend to meddle into the crowd a little bit so it’s the perfect spot, it’s intimate,” said Roy. “A lot of specials you watch now, they are performing on stages in these massive theaters. They are forgetting that’s not where a majority of comedy lives. Comedy lives in these indie rooms, these small comedy clubs, cramped little spaces. To me, that’s where stand-up should be seen — in places where the comic is close to you. It’s a totally different experience going to a club and being part of this intimate gathering. It will feel more like a classic comedy show.”