Show You Should Know – Fontaines D.C. Brings A Post-Punk Trinity To Denver

A lot has changed for Fontaines D.C. since the release of their 2019 debut album. In three short years, the Irish-born quintet has grown from a little-known post-punk outfit to a Grammy-nominated tour de force with a laundry list of accolades adorning their resume. Along with surviving the pandemic, they’ve packed London’s Alexandra Palace with 10,000 screaming fans, made appearances for live performances on popular news shows like CBS Saturday Morning, spent a couple of evenings with Jimmy Fallon and moved away from their beloved Dublin — a choice which they harken back to on their recently released album, Skinty Fia. Currently, Fontaines D.C. is checking another box off their bucket list with a North American Tour, which will see the punk rockers stop in Denver to take over The Ogden Theatre on Monday night.

Fontaines D.C. launched themselves into the forefront of the modern punk scene with the release of their 2019 debut album, Dogrel — a highly reviewed release that landed the group comfortably in the company of noteworthy contemporary punk bands like Idles. Applauded by critics as a “perfect debut,” the 11-track release strips punk to its roots and puts the focus on calculated and intelligent nuance.

Vocalist Grian Chatten captivates with the explosive opener “Big,” on which he satirically spits in the face of modernity’s preference towards commodification. Declaring “I’m going to be big!” he begins to build a character whose downfall will be aspirational celebrity. Driving each song forward with rhythm, they trade classic, counterculture punk cries for disdain towards the lack of opportunity in their hometown, lamenting “doesn’t matter what you are, get yourself a good car, get out of here,” on the penultimate song, “Boys in the Better Land.” The song hints toward’s Hollywood and America’s obsession with making celebrity a legitimate career. But those opinions seem to fall away on the final track of the album, “Dublin City Sky.” Indulging in both sides of the coin throughout the album, Fontaines D.C. are at war with themselves, and their resulting debut echoed with the triumph of the battle’s final victor.

Following the highly-praised release of Dogrel, Fontaines D.C.’s sophomore album seemed destined to live up to its namesake: A Hero’s Death. Opening with the telling “I Don’t Belong,” it seems that even the Dubliners feel out of place with their newfound celebrity, pushing back against the cheerful viewpoint on celebrity they touted on their debut. Chatten croons, “I don’t wanna belong to anyone,” dismissing the expectations and embracing the loneliness of this newfound solitude.

But the band trudges triumphantly on. Cheerfully chugging through 11 tracks, A Hero’s Death walks the tightrope, balancing comedy and tragedy. Dripping with jet black humor, the pessimism of A Hero’s Death is obscured by upbeat and frenzied music, summoning forth visions of an apocalyptic horror house. But midway through the album, the title track, “A Hero’s Death,” boldly declares “life ain’t always empty.” The chorus quickly becomes a perseverant rallying cry, adding an optimistic voice to the album that declares Fontaines D.C. has more to say and commanding audiences to listen, making it apparent that the success of Dogrel was far from a one-off.

And just in case anyone had any doubts of that fact, Fontaines D.C. released Skinty Fia earlier this year — a 10-track release that puts the Irish punks at the center of the post-punk revival they’ve championed. With a variety of influences and homages to their roots making appearances throughout the album, Skinty Fia takes a bolder direction than Fontaines D.C.’s prior releases, showing a newfound level of maturity without sacrificing any of the band’s prior youthful spark. But despite these nuanced changes, there are plenty of things for old fans to love. Despite their relocation to London, the group hasn’t yet relinquished its yearning for home: Skinty Fia drips with thoughtful and nostalgic lyrics for Dublin.

Though they’ve made their homesickness public knowledge, Fontaines D.C. shows no signs of abandoning their new lives for their pre-Dogrel histories at home. In fact, they’re returning to what they’ve dubbed “the better land,” along with fellow Irish rockers Just Mustard. That tour is already well underway, and when it ends, Fontaines D.C. will return to their side of the pond. With their steady rise to the top showing no signs of slowing down, their upcoming show at The Ogden may be Denver’s last chance to see the punk rockers up close and personal before their trajectory leads to mainstream success that will see them selling tickets to much larger venues.

Fontaines D.C.’s North American Tour will see the band stop in Denver for a headlining show at the Ogden on Monday, May 9. Tickets are available via AXS. 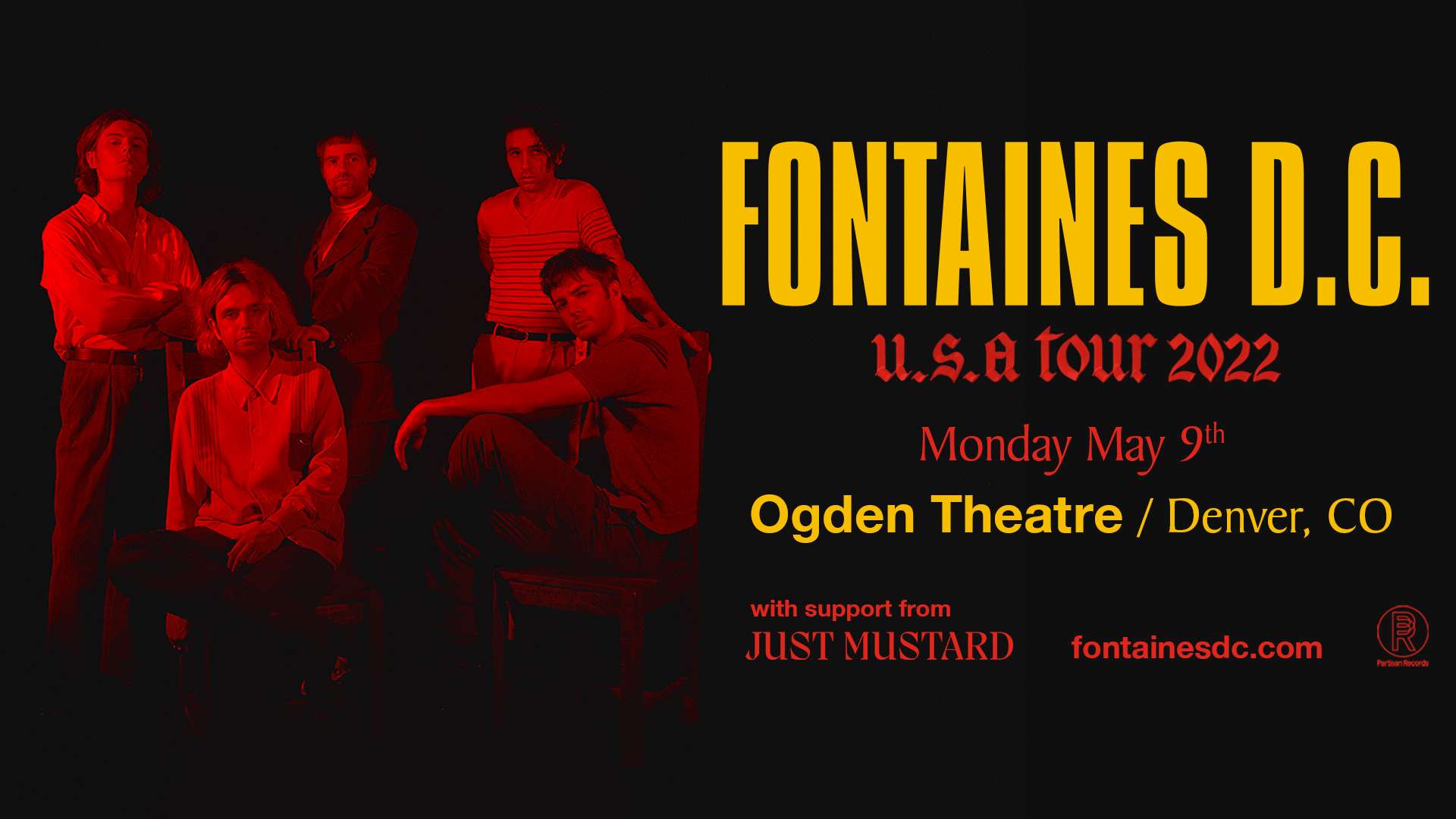