Arguing that any rap-active tour holds as much artistic depth as Freddie Gibbs, MIKE and redveil would be (at best) barely debatable and (realistically) pointless. Three emcees whose geographical origins, musical style and stage presence could not be more different converged at Boulder Theater on Friday night for an exhibition of their one clear similarity: talent — and tons of it. Everything about them oozes quality, down to their art gallery of formulated merchandise tucked behind the concert floor under the venue’s faded pink ceiling. It’s hard to pin down what era of time Boulder Theater exists best in — its mid-late ’70s vintage color pattern juxtaposes the bizarre floral murals on either side of the auditorium. But when redveil took the stage, the theater morphed from an art-deco triumph of days past into a playground. 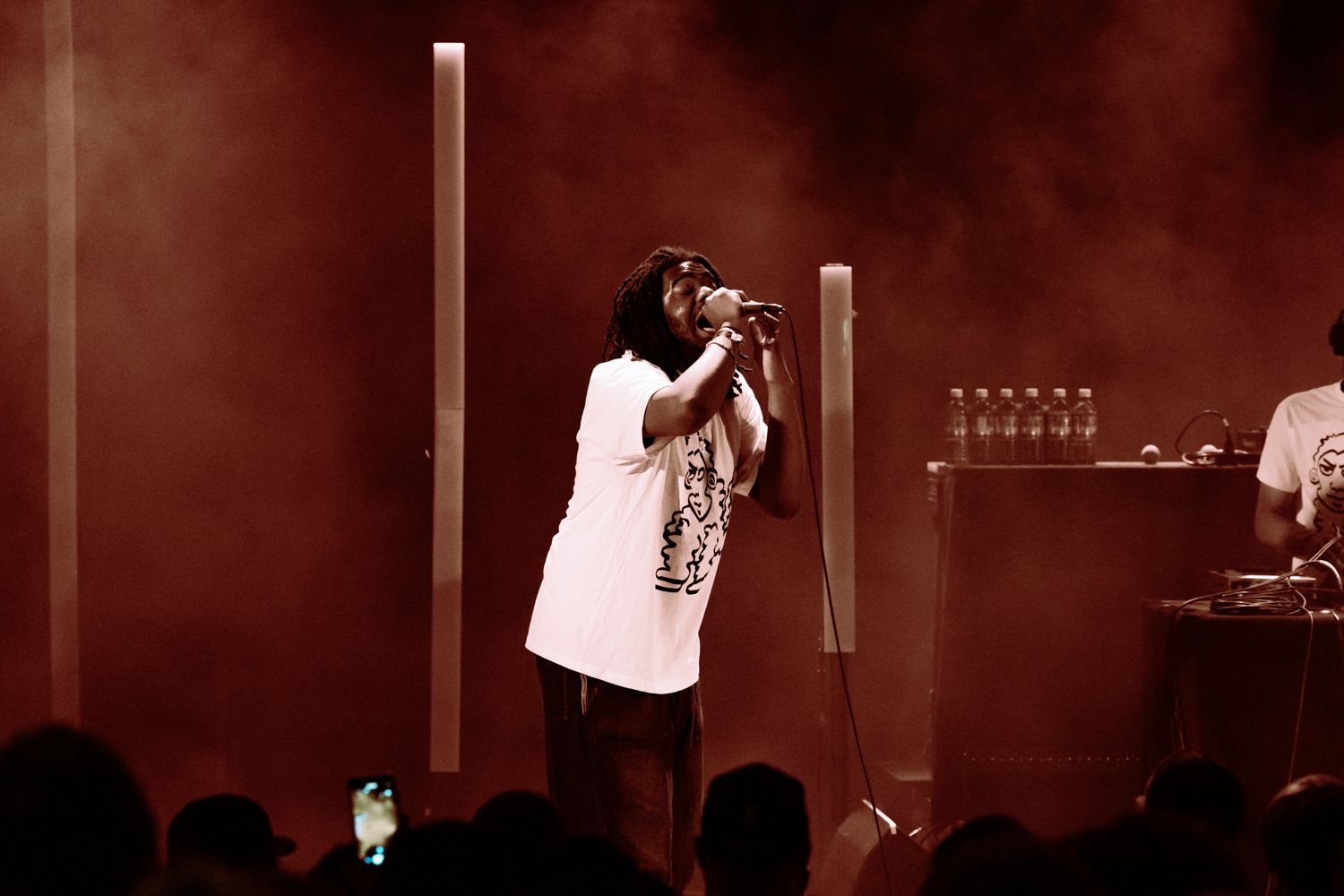 The crowd — already large for a first opener — jumped at the chance to go crazy during his opening track, “Clench.” It’s a steadfast intro piece: high octane and appeasing with a strong cadence. Shortly thereafter was “Campbell.” The first track on his debut album succeeds best during the hook — a magnificent sample of Rayfield Reid’s “Treat You Right.” It’s worth noting that redveil — a Prince George County product — produces all of his own beats. Even more noteworthy is his age. The one-man-army turned 18 on April 20, a day on which he subsequently released his second studio album, learn 2 swim. He burned through most of the songs from his 9-day-old follow-up project, then capped things off with “Weight,” a speaker-shaker that’s both easy to bounce to and his biggest hit, as well as a golden display of his lyrical ability. 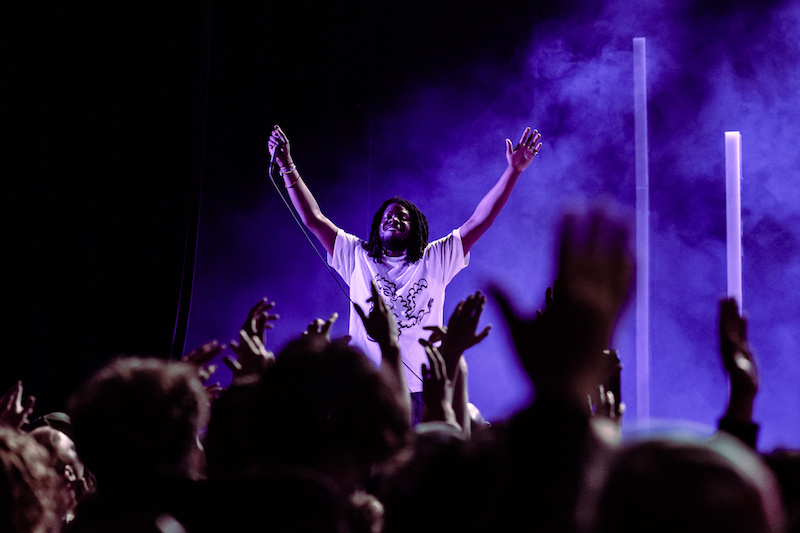 MIKE, the next act, hailed from the same family of introspective wordsmiths as Earl Sweatshirt. No artist holds the same body language as MIKE during live sets. Although most of his records are deeply personal, slow in tempo and melancholic, MIKE goofily bobs his upper body with a giddy smile on his face. The same went for his show in August at UMS. It’s obvious he’s eternally grateful for the in-person support he receives. The NYC artist told the crowd to give a hand for themselves over and over, between sparse, jagged songs like “Crystal Ball,” “Aww (Zaza),” and the uplifting “no, no.” “Evil Eye” brought everything together — MIKE rapped his popular intro off Disco! Under a thick cloud of blood-red stage lights. Before closing his set and introducing the night’s main event, he had the gallery hold up “hand hearts” — perhaps a reminder to love oneself, love the person to your left and right and love the big guy on stage saying you are loved. 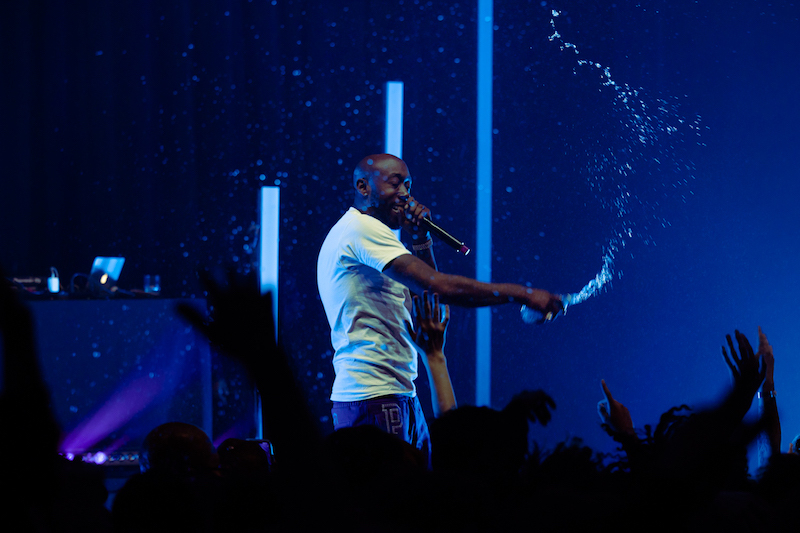 The man of the night took the stage, bearing a tool belt of labels and renowned history. Freddie Gibbs is a cult hero due to his successful albums Piñata and Bandana — two certified classics in collaboration with Madlib. He’s a beacon of drug rap — Fetti and Alfredo cemented him as such. He’s a smooth talker and an even smoother walker. Freddie made that obvious. He’s a native of Gary, Indiana — a gloomy, rough-around-the-edges neighbor of Chicago, but a proud resident of sunny Los Angeles. Gibbs is unfiltered and unapologetic, cool as ice, oozing with confidence and unafraid to put all of those traits on full display for the fans in attendance. He’s also a true comedic character, and this was made immediately known to those who weren’t aware as he strutted out for his set, belting “Return of the Mack” by Mark Morrison. Gibbs had the crowd in a frenzy by the time he transitioned to “1985,” a slick, sweeping record that relates Michael Jordan’s rookie-year Bull’s team — dubbed the “cocaine circus” — to a lifestyle he once (or possibly currently) lived. The “FREDDIE, FREDDIE, FREDDIE” chants were deafening. He didn’t wave his arms or dance during them. He stood with his hands clasped and soaked them up. “Thuggin,” a transcendent staple of modern rap music, was performed a cappella for the first and third verses. Its brilliant instrumentals cut the two mic-only sermons down the middle. 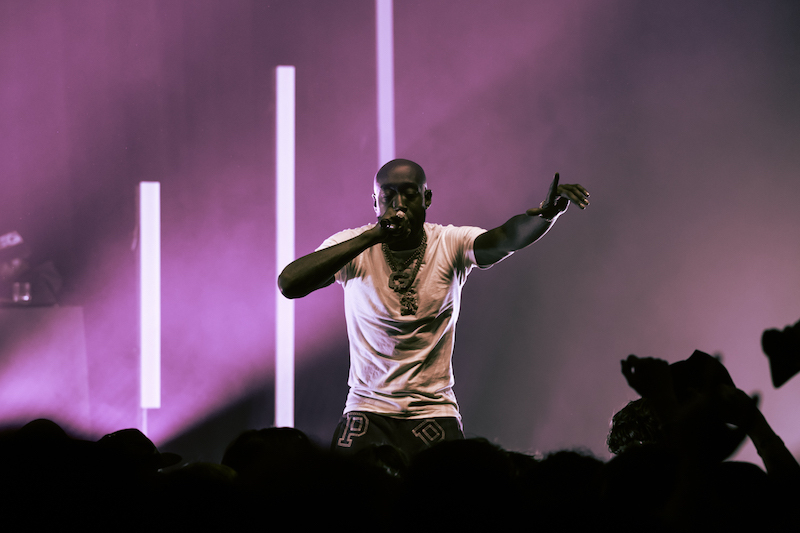 Throughout his show, Gibbs repeatedly told the crowd he was going to “test them” with the next song — looking for the true fans. This was pointless. It’s not a test. Every person at Boulder Theater knew every square inch of his catalog since Midwestgangstaboxframecadillacmuzik. The loudest the audience got was for the unforgettable chorus on “Crime Pays.” His library is so good, that it became difficult to separate one gem from the next, and then, just like that, he bode farewell and disappeared into the gallows of Boulder Theater. It was an abrupt ending to a dazzling show, and as a sea of fans filed out and into downtown Boulder, the feeling of satisfaction was ever-present and visible.