From sweet to sour, Olivia Rodrigo gave a tasteful performance to a sold-out show at Mission Ballroom last night. Inspired by teen heartbreak, high school and pop-punk, the starlet offered fans every reason to scream their heartbreak out. Although “The Sour Tour” would be the first tour for the 19-year-old pop star, she owned the stage like a veteran performer. Rodrigo gave it her all during the second sold-out night at Mission Ballroom, proving that this was just the beginning of things to come. 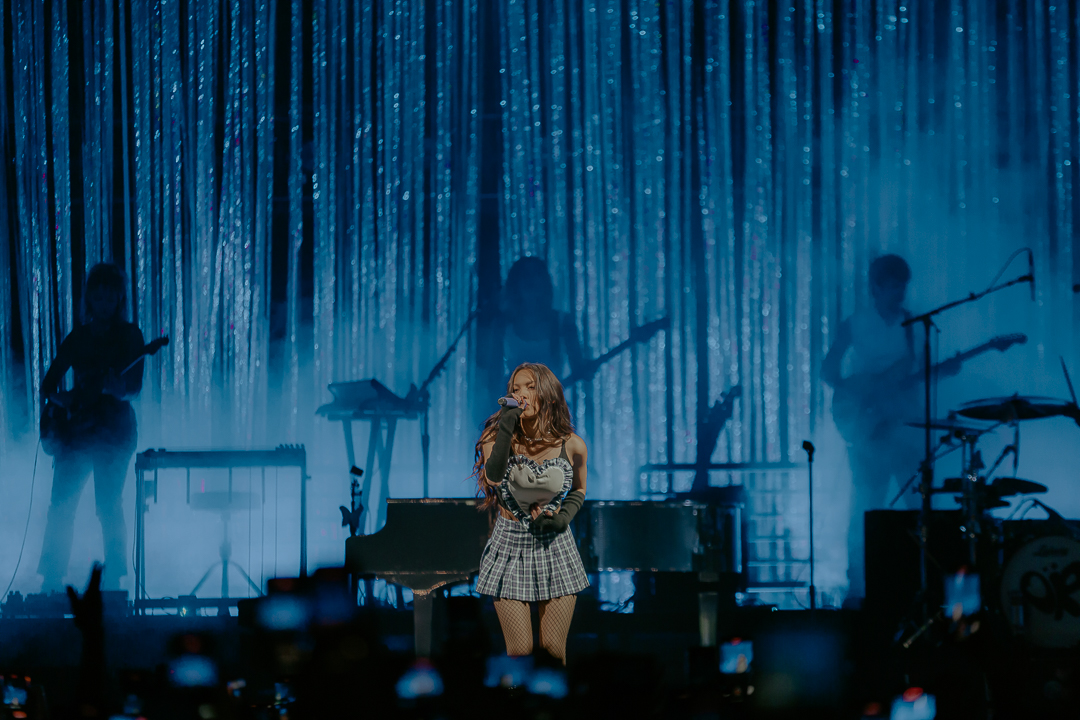 To open the show, Gracie Abrams performed a slew of heartbreak anthems with catchy hooks and rhythmic basslines. Fans gathered themselves from the strong winds outside and sang along to almost every song from the 45-minute set. Abrams shined as she interacted with the crowd, grabbing fan regalia and even taking a polaroid picture mid-song while maintaining perfect pitch. Instead of shying away from the melancholic lyrics, fans leaned into it by turning on the light of their phone cameras, shining them in the air and swaying back and forth. The versatile set featured sing-along anthems and stripped-back guitar, ending with dramatic strobe lighting. Before leaving the stage, Abrams expressed her love for her fans and for Olivia Rodrigo stating, “I feel so lucky to be with all of you tonight and I’m grateful for Olivia for having me be a tiny fraction of this tour.”

During intermission, the crowd was served a platter of Rodrigo’s musical inspirations from the likes of Fiona Apple to Charli XCX and ended with One Direction’s “Olivia” where fans were delighted to sing along knowing they’d be that much closer to the main event. In a timely manner, the opening sequence to “brutal” began. The curtain dropped and Rodrigo stepped into one of the biggest cheers Mission Ballroom has ever heard. Teens, tweens, moms and everybody in between raged into a fit of angst shouting the lyrics to “brutal” and then to “jealousy, jealousy” with extreme passion and fury. While feelings of insecurity, inadequacy and heartbreak can lead to sadness, Olivia Rodrigo turned these feelings into a rage to ignite the show. Fans were more than happy to assist by enthusiastically singing along so loudly that Rodrigo, at times, became hard to hear through the thousands of screams in attendance. Before drifting into the next section of the show, Rodrigo expressed gratitude to her fans stating, “Thank you from the bottom of my heart! It really means so much to me that you bought tickets, drove all this way and waited in line. Thank you so much.” 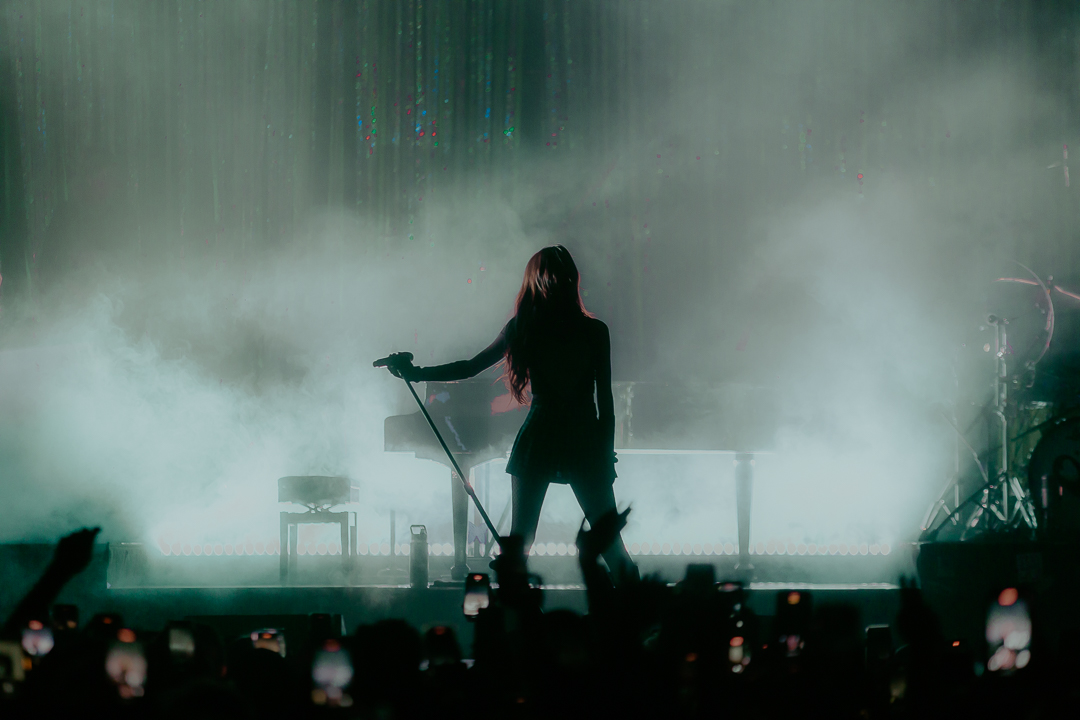 While in the driver’s seat, the singer-songwriter took the crowd down a gear to perform the hit “driver’s license” on the piano, commanding the room’s attention for a heartfelt performance. She reminisced about the song’s inspiration explaining that it’s about crying in the car while driving around the suburbs listening to Gracie Abrams’ music. A full-circle moment for the starlet. From one inspiration to the next, she performed a cover of Avril Lavigne’s 2002 hit, “Complicated.” Even though the crowd appeared to be young, they were fluent in the pop-punk covers of the night.

The following act of the performance saw Rodrigo standing in front of the curtain with nothing but a guitar and mic stand. Fans witnessed Rodrigo in a new light where she was able to showcase her songwriting and vocal abilities with the songs, “hope ur ok,” “enough for you” and “happier.” The tender songs soared through the ballroom as fans swayed and lit up the room. Halfway through the set, Rodrigo proved her versatility as an artist by performing at high voltage while also employing the ability to tug at heartstrings through a simple melody and guitar. However, the softness wouldn’t last as she upped the ante by performing another cover. This time she sang “Seether” by the band Veruca Salt, expressing how she learned about the song from her mother. Following the adrenaline rush, she hopped on top of the piano, not to play the keys but to perform her hit “deja vu” in a dramatic fashion. 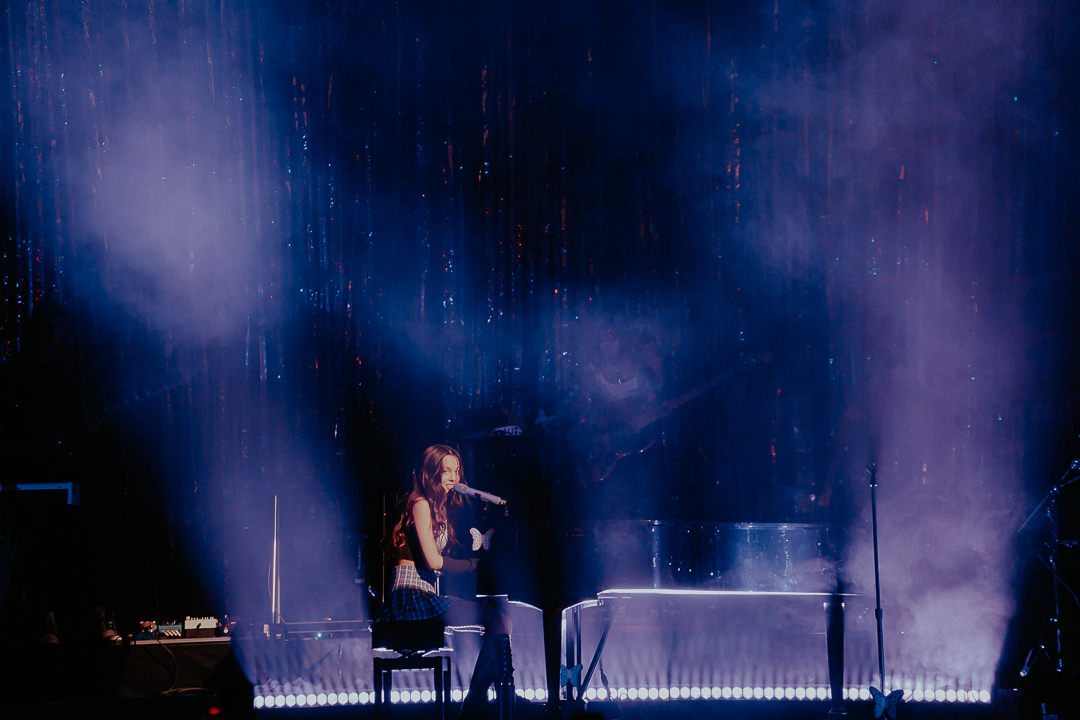 Fans were engaged every second throughout the performance. Every lyric was sung, shouted and screamed, creating an ethereal experience for all those in attendance. It was impossible to feel alone knowing thousands of other fans related to the same melodies and stories performed by the Grammy winner. Even during the most melancholic moments of the night, the crowd felt united knowing that for the hour, things would be alright. To end the show, Rodrigo took fans where it all began with the energetic “good 4 u.” A disco ball lit up the ballroom until the chorus hit and confetti exploded into the sky. Fans jumped for joy and grabbed at the paper falling to their feet. Olivia Rodrigo thanked the crowd and hit the ground running for the next stop on “The Sour Tour.” Fans continued to grab at confetti with song titles written on them, including “hope ur ok,” leaving fans with a positive message, because honestly? It’s brutal out here.

All Photography By Brandon Johnson.