From start to finish, Dua Lipa performed an electric set at Denver’s Ball Arena. In full glamour, the pop star performed a range of tracks inspired by the ’80s, disco and nightlife, giving fans every reason to dance the night away. While Dua’s most recent album was released two years ago during the beginning of the pandemic, “The Future Nostalgia Tour” felt as fresh as ever. Both elements of future and nostalgia came together full circle as fans took their dance moves from quarantine zoom parties to a packed Ball Arena Tuesday night.

Before Dua shined on stage, fans entered the arena greeted by the vocal embellishments of Caroline Polachek. The indie, avant-pop artist showcased a diverse musical palette for all to enjoy while performing in a smokey daze and colorful backlighting. Although not known for her dance floor beats, Polachek pumped up the crowd with the song “Bunny Is A Rider,” skipping around the stage and exchanging dance moves with fans. The singer put the audience in a trance with her ethereal presence and songs from her Pang album. She even gave fans a glimpse into the future by performing unreleased tracks. Closer to the end of the set, Polachek transformed into a rockstar as she sang “Ocean of Tears,” headbanging to the beat of the drum. Fans stood in awe at the transformation and finished their time with Caroline by singing along to “So Hot You’re Hurting My Feelings” — which trended on Tik Tok earlier this year. 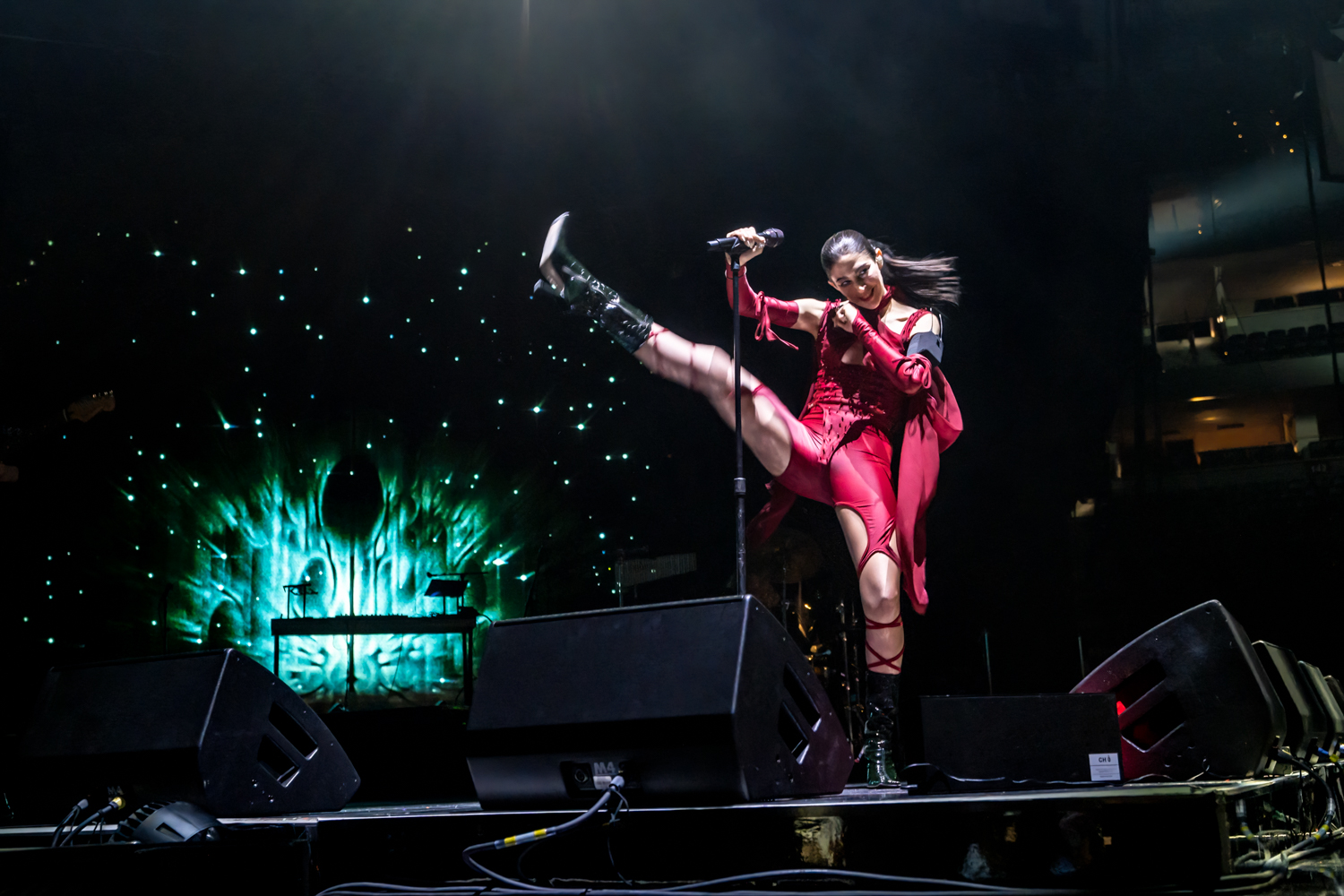 While Caroline greeted fans with vocal embellishments, Megan Thee Stallion energized the crowd with a set full of hip-hop beats, body positivity and twerking. The presence of the Grammy-Award-winning artist could be felt from outside of the arena. She pumped adrenaline into the arena by performing “Freak Nasty” and “Megan’s Piano” while fans bounced along with the Houston-born star. Next in the set, Megan evoked nostalgia by performing the hit “Savage” which brought fans back to the start of the pandemic and the rise of TikTok when “For You” pages were flooded with people dancing to the song. Megan closed her performance with a note on body positivity, asking the crowd to “make some noise if you love your body.” The arena erupted while Megan began the intro to her song “Body.” The energetic set was met with astonishment as the star twerked and bounced to every song effortlessly. Fans adored every minute of it, hyping up the rapper and feeding into the high energy. Megan sashayed off stage as she exclaimed, “If you don’t know about me, ask your boo about me.”

Following the two dynamic performers, Dua Lipa entered center stage in a neon green bodysuit, ready to get physical. Without a warm-up or proper stretching, Dua Lipa gave the packed Ball Arena a workout during her song “Physical.” Fans shouted along with hands in the air, “Lets! Get! Physical!” as a self-fulfilling prophecy for what was to come. The high-intensity introduction continued with a strut down the catwalk by the pop star before gliding into a soulful section of the show with “Cool” and “Pretty Please.” After the crowd caught their breath from “Be The One,” Dua Lipa asked,” Denver, how the fuck are you feeling tonight? Let me hear you make some noise!” 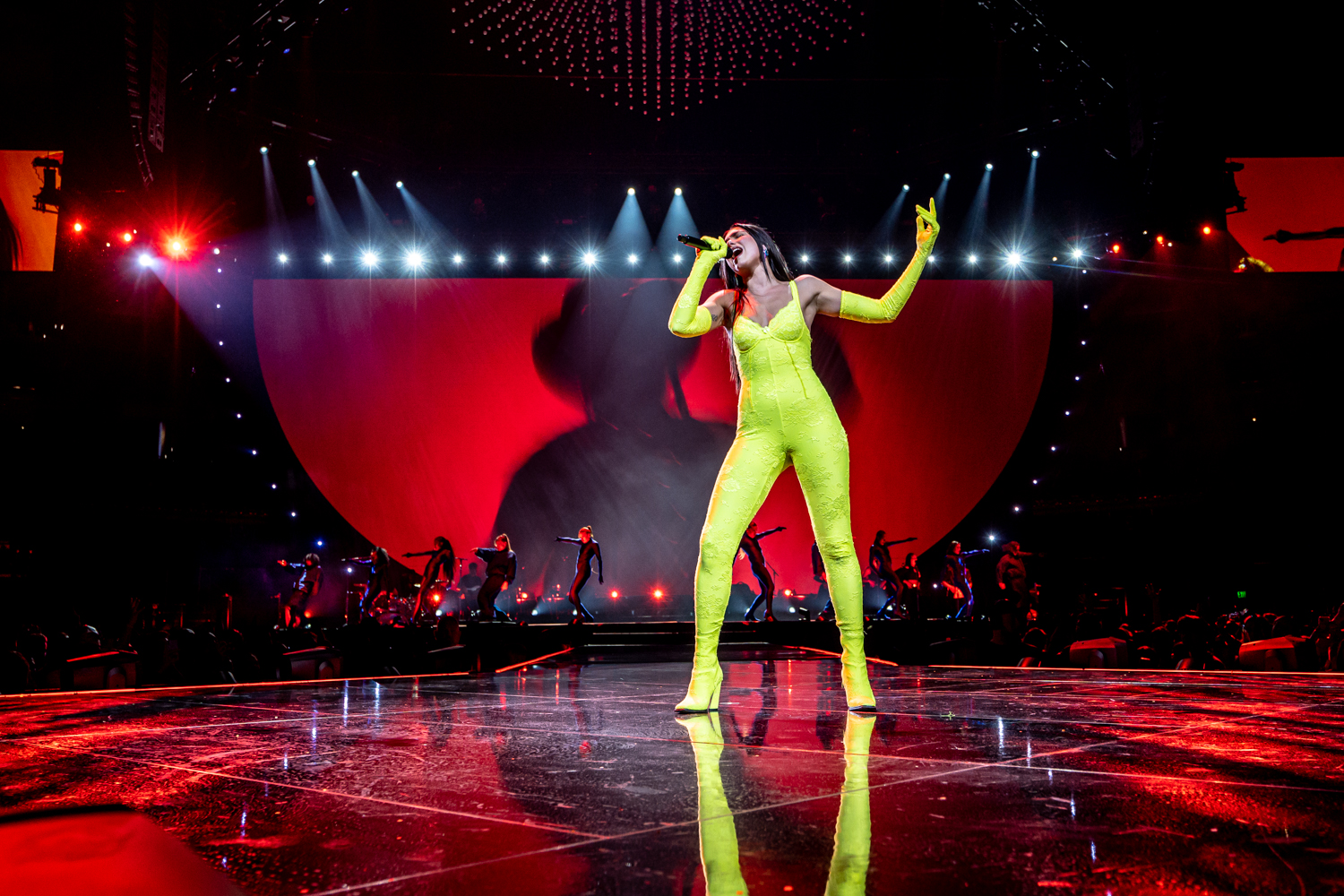 Following a lobster attack that was portrayed through a comic book scene on the big screen, the opening drum pattern to her latest single “Sweetest Pie” featuring Megan Thee Stallion began. Denver was in for a treat — this was the live performance debut of the single. Dua shined on the main stage while Megan twerked it out on the catwalk. The duo put fans in a frenzy as they screamed and applauded at the delightful performance. Unfortunately, the song ended and Megan left the stage. However, the energy and excitement carried through with “Fever,” where Dua provided a contemporary dance routine to dazzle the crowd.

Continuing the dance party, Dua took it up a notch by appearing at the end of the catwalk with a dance crew. The outfit change from a bodysuit and heels into athleisure and sneakers was indicative that things were about to get sweaty. The Club Future Nostalgia portion of the show took fans to a club scene filled with glitter, balloons, disco balls and irresistible dance floor beats. “One Kiss” kicked started the deep club energy while “Electricity” sparked the crowd with movement. Nothing could have warned fans for “Hallucinate” as the entire arena jumped with joy to the glittering scene. Dua gave the crowd a rest by performing “Cold Heart” featuring Elton John on screen. Fans savored the moment by turning on the flash on their phone, waving it in the air and swaying together in unison. 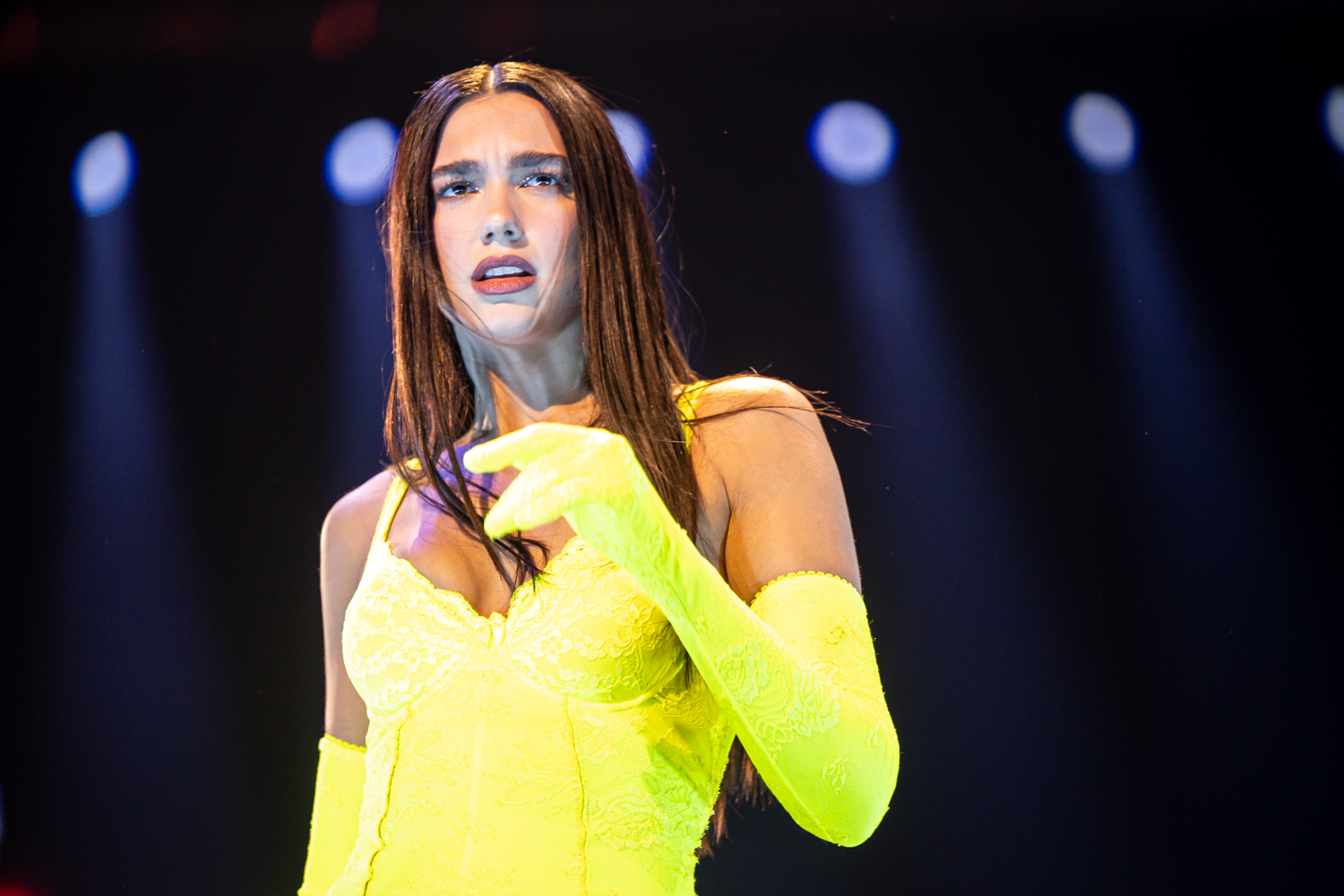 During the last section of the show, Dua performed “Levitating” while literally levitating on a lifted platform wearing a black and glittery bodysuit with heels. The popstar gave Denver one last reason to dance by performing “Don’t Start Now” — the song that started the era back in 2019. For many fans, the album Future Nostalgia was a reprieve during the start of the pandemic. In uncertain times, it was certain that the songs performed during the set could lift spirits and boost moods. “The Future Nostalgia Tour” brought the last two years full circle — from quarantine zoom parties to arena concerts. What Dua Lipa proved is looking back can project one forward. After an energetic night full of exciting emotions, the show closed with Dua Lipa expressing gratitude, “I love you all!” and ending with “I’m Dua Lipa, goodnight!” as if the thousands of screaming fans didn’t know who she was.