In 2021, 1.2 million people crossed over the U.S./Mexico border. This number fails to account for those who died on their journey.

Each year, hundreds of migrants lose their lives attempting to cross the border, including a record 650-plus migrant deaths in 2021. To cross the border, refugees have to trek through the desert, an unrelenting landscape not suitable for almost any form of life. People die of starvation, dehydration, heat exhaustion and animal attacks during journeys that can take months.

An original Curious Theatre Co. Production, REFUGE celebrated its world premiere on March 5. Co-created by Satya Jnani Chavez and Andrew Rosendorf, the play follows three people and two animals on their individual fights for survival and safety in Southern Texas, each living in the shadow migrant deaths occurring just miles away. 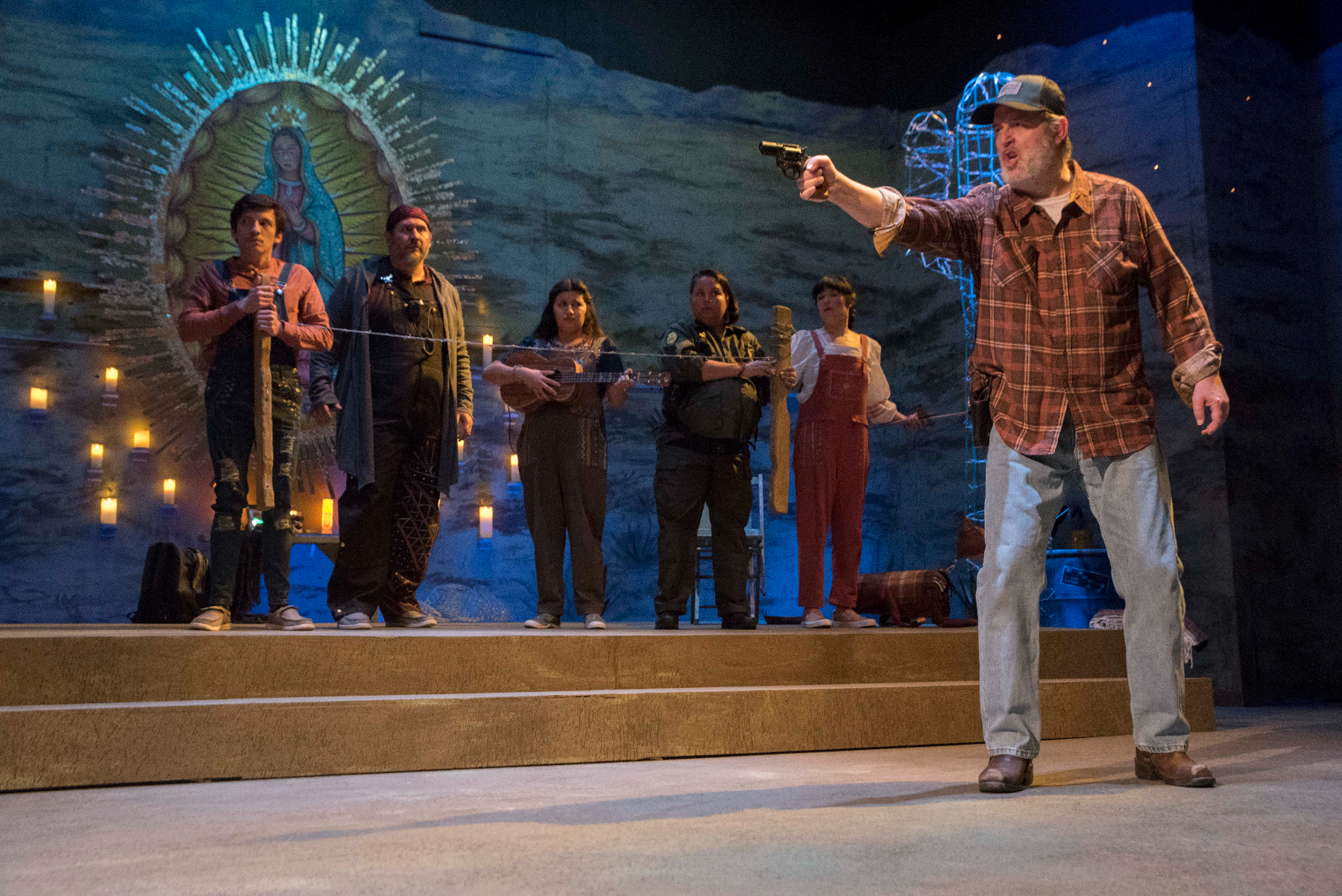 The story opens 70 miles north of the U.S./Mexico border near Desolation, Texas. An unnamed girl (Satya Jnani-Chavez) stumbles through the dark, her bare feet about to collapse underneath her. She happens upon a woman and baby who died of dehydration. After laying under the brutal sun for several days, their bodies are partly mummified. The girl looks saddened but needs to keep walking to avoid a similar fate. She takes the woman’s ill-fitting shoes.

Several hours later, the girl wanders onto Eden Ranch, hallucinating. Frank (Erik Sandvold), a man in his 70s, owns the ranch. Immigrants who cross the border frequently arrive on Frank’s ranch by design. His late daughter, Sarah, posted signs in the desert directing folks to follow the big dipper over a decade ago. When she was alive, she offered migrants food, water and help to arrange their next steps. Frank doesn’t realize the signs are still there and has become resentful towards people he views as trespassers. However, after realizing the person passed out on his ranch is a teenage girl, he’s reminded of his daughter and resolves to help her. 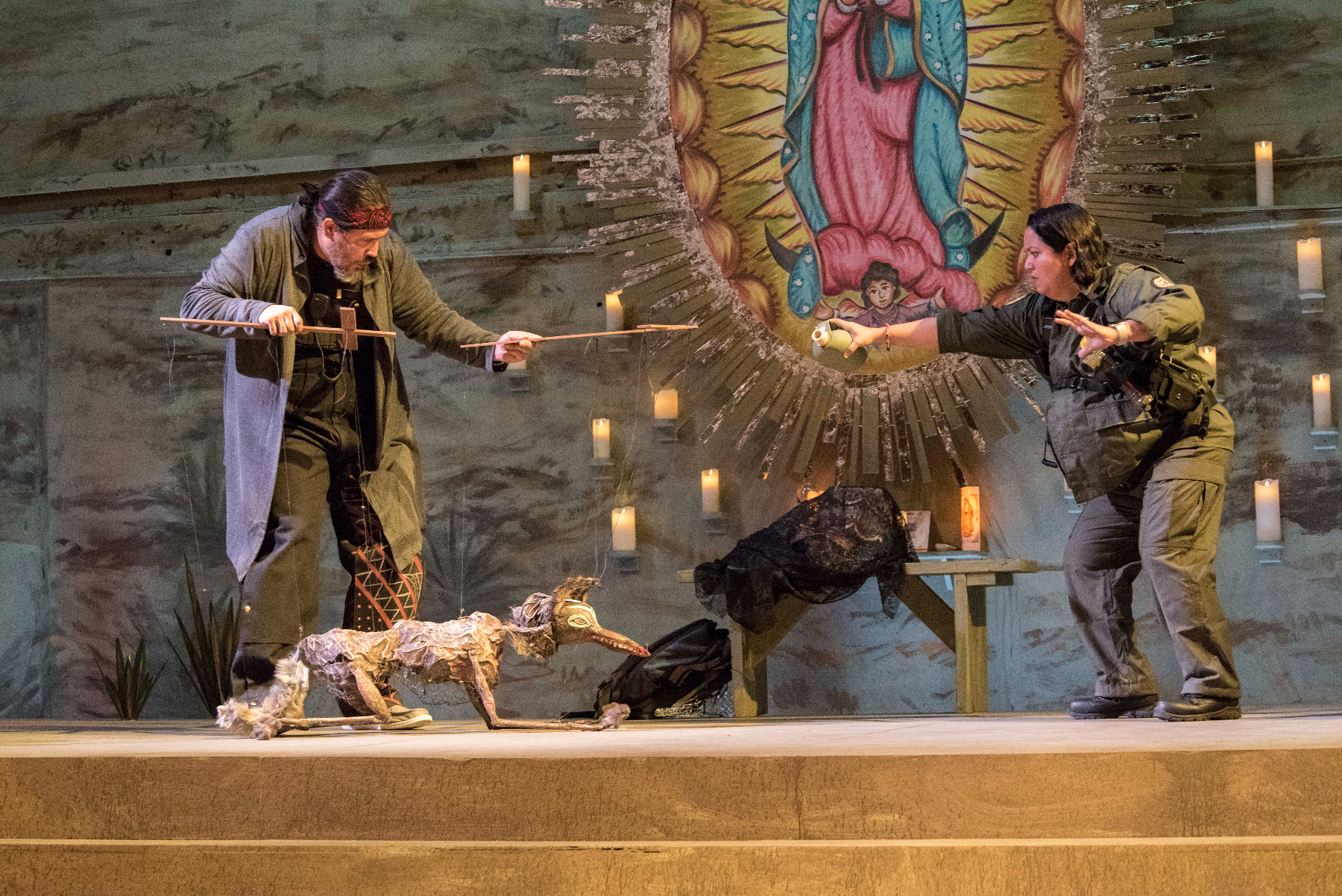 Meanwhile, Martina (GerRee Hinshaw), a Mexican-American U.S. Border Patrol agent surveys the desert for trespassing migrants. She stumbles upon the slightly mummified woman and begins to inspect her body, only to discover the mummified newborn in her arms. Martina is eight and a half months pregnant, and the scene leaves her stunned. Upset she found the woman and her baby too late, she laments, “Sorry [God] didn’t give you both a miracle, watch over you. Your home doesn’t want you, we don’t want you. Stuck nowhere in limbo, like my whole life in this country.”

While the girl fighting to avoid deportation serves as the story’s main protagonist, she carries with her everyone who didn’t make it this far. She initially traveled as part of a group of 40 people. Upon learning this, Martina returns to the area to look for more migrants, only to find 34 of them have already died in the desert.

Over the next 24 hours, the girl, Frank and Martina become entangled over everyone’s sheer will to create a safe life for themselves in the United States.

REFUGE thrives on a level of magical realism that demands the audience’s suspension of disbelief. Most emblematic of this is the production’s two supporting characters: Wolf and Steph. Both animals are puppets designed by Adolfo Romero. Wolf (Sam Gilstrap) lives malnourished in the desert without a pack. Steph (Lisa Horia-Garcia), Frank’s ranch dog, is at odds with Wolf. Wolf lives in hunger and feat and Steph is safe on the ranch — a central conflict that represents the struggle between the girl and Frank. 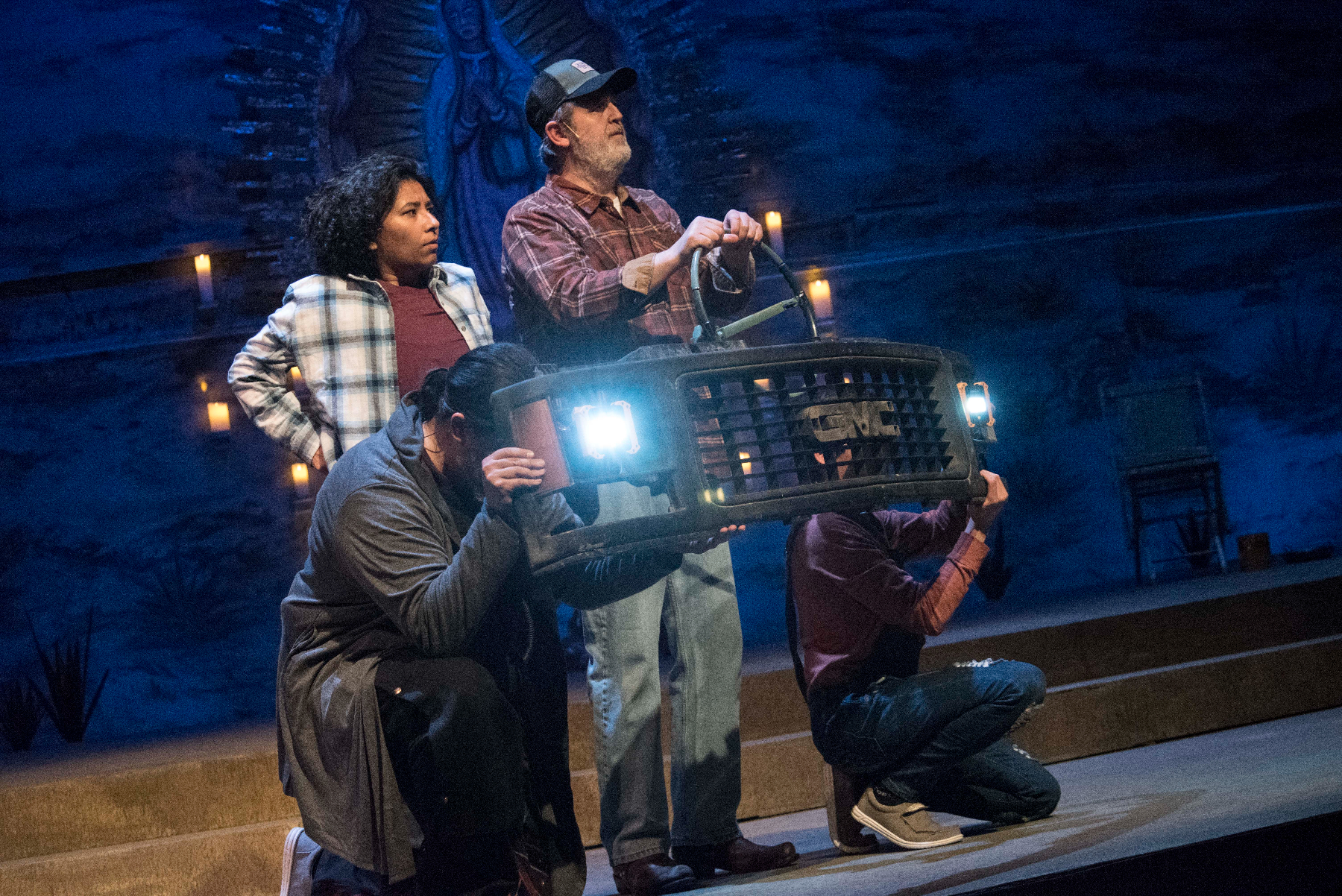 Perhaps the wisest character, Wolf speaks to the inherent struggles that come with living along and crossing through the southern Texas border. Wolf manages to survive in the harsh desert against all odds, but he is always starving. He also symbolizes the modern-day horror of an exodus through the desert, creating a visceral experience for the audience. He reminds the audience more than once, “It’s hard for anything to grow out here, live out here the way the desert, the brush wants it. We are all illegal here.”

Mari Meza-Burgos, the play’s trans creator, deftly wove English and Spanish throughout the production’s script and music to provide rich texture and preserve context and tone. Audience members unfamiliar with one of the languages can still follow the story through setting, body language and the actors’ performances.

REFUGE is a breathtaking story. With layered artist collaboration, it showcases the impact of bilingual storytelling pouring from every corner of the production.

REFUGE runs through April 9 at Curious Theatre Co. You can find tickets on its website.