Three Saints Revival Leaves Patrons Dreaming About Their Next Visit

The transition from Hearth & Dram to Three Saints Revival at Hotel Indigo in North Union Station is like day and night. The former was a classic steakhouse featuring dark lighting and business attire, leaving a slight sense of intimidation. At Three Saints Revival — the new Mediterranean wine and tapas concept by restauranteur Robert Thompson — curtains are drawn to allow natural light to expose the shades of purple and orange that decorate the room. However, it does have a nod to the night with Thompson mentioning an absinthe dream state as the inspiration for its aesthetics. The whimsical nature of Alice in Wonderland comes alive upon the entrance as the color palate could be mistaken for the fur of the Cheshire Cat. The theme is unlike most found in Denver — a main goal of the Three Saints team. As one of the city’s newest restaurants, it emulates the idea of new, fresh and exciting.

“We wanted to cater to the community and our surrounding area rather than stick to the typical steakhouse found in a hotel,” said Thompson. “We feel like this encapsulates a revitalized need that the city had, hence the name.” 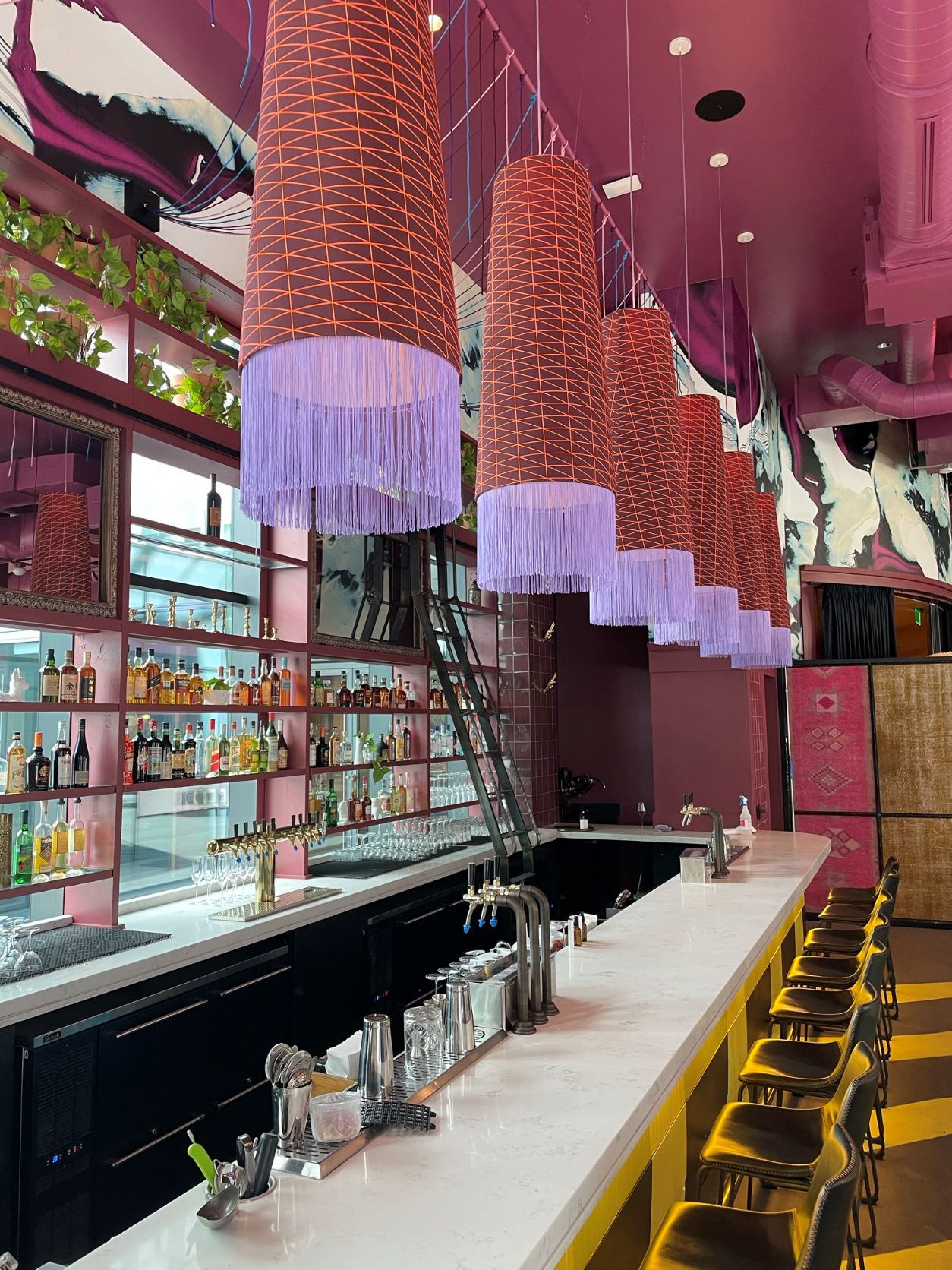 It looks straight out of a fantasy, yet it is truly rooted in dreams with little accents to build out that thought, with wallpaper that highlights common dream themes like losing teeth, being naked and snakes. Beneath the bar to hold a purse or a jacket are golden men that appear to be flying, another common dream. Then the small server station in the middle of the room has the iconic shape of an everyday house, yet another aspect associated with dreams. It’s the thoughtful details that give subtle hints on what their intentions are.

A sense of reality is lost when stepping into the bathroom and mirrors transcend angles as if they were Salvador Dali paintings. The light fixtures have a white airiness about them synonymous with clouds. As they effectively accomplish their theme, it’s anything but a mere themed bar with an artfully and thoroughly crafted food and beverage program.

“The name and representation of revival signify what we hope this restaurant does for many people,” Thompson said. “It brings back their love of getting together over a great meal. Something that we all have longed for these past couple of years.” 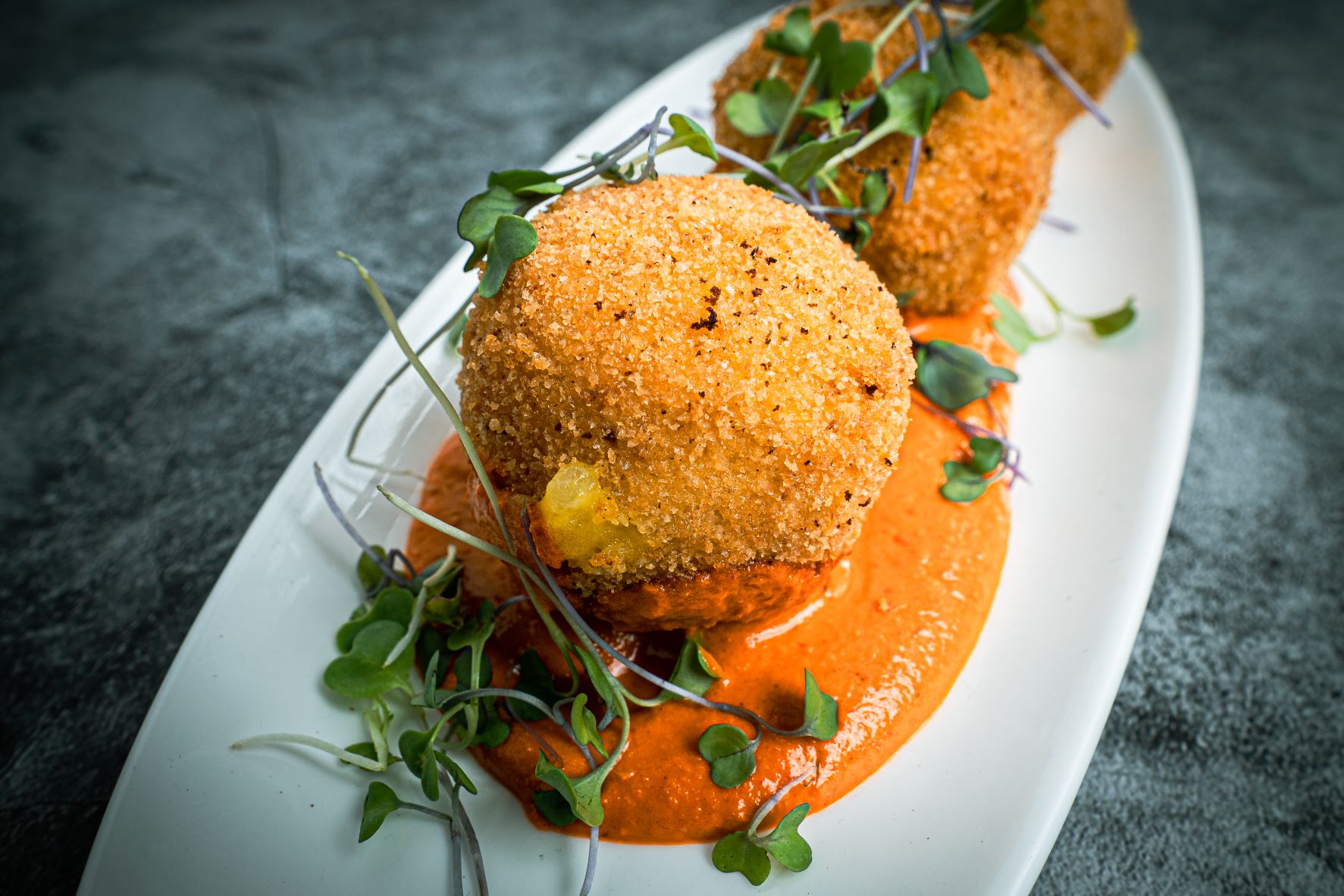 The atmosphere takes patrons outside of Denver and the menu is no different. With the culinary director’s ties to the Mediterranean, the tapas format and fresh flavors bring that style of dining to life. Chef John Broening’s upbringing began in the Soviet Union but his travels led him to the vibrant life of those living on the coast of Greece and the shores of Italy. While Broening has ties to this part of the world, it was a joint idea from the entire team.

The tapas theme pulls on the shared community-style dining that is often seen at steakhouses where there’s one large dish and supplementary sides that make their way around the table. They forgo mashed potatoes and instead bring out Potato Croquettas ($9) with a saffron-infused center to glow as each crispy exterior seal breaks open. The creamy interior releases like lava and combines with the roasted red pepper and Calabrian chili sauce.

The balance the Three Saints Revival team achieved in designing the space carries through in combining flavors. The Orange & Olive ($9) offers the tart orange a salty touch of Kalamata olives, a bite from the red onion, sweetness in the blood orange essence and earthiness from the mint. Rather than succumbing to the traditional pork chop and plain applesauce, the Pork a La Plancha ($17) includes a fatty pork belly so tender that the caramelized crust holds it all together. The thinly shingled apple escabeche cuts through the richness with acidity.

The memory of Hearth & Dram’s steak lives on with the New York Steak with Salsa Verde ($19). This simple dish features rows of steak with a ruby center. Paired over the top is a herbaceous blend similar to a chimichurri of sorts reiterating the brightness that marks the menu.

Previous patrons will recall the divisive railing separating the bar scene from the rest of the restaurant space. The railing removal creates an open floor plan encouraging the mingling of the cocktail and food programs. The wine menu is not the only pairings at work. Nine thoughtfully crafted cocktails currently make up the menu. Rather than pouring out a simple red or white wine, cocktails have the allure of presentation. In the case of Three Saints, the drinks menu showcases three components: flavor, presentation and theatrics. While not intentionally for the show, spraying a mist of rose water atop Pan’s Cave ($12) accentuates the floral notes of lavender syrup to the forefront. Though, the black perfume bottle spraying the mist is a nice touch. 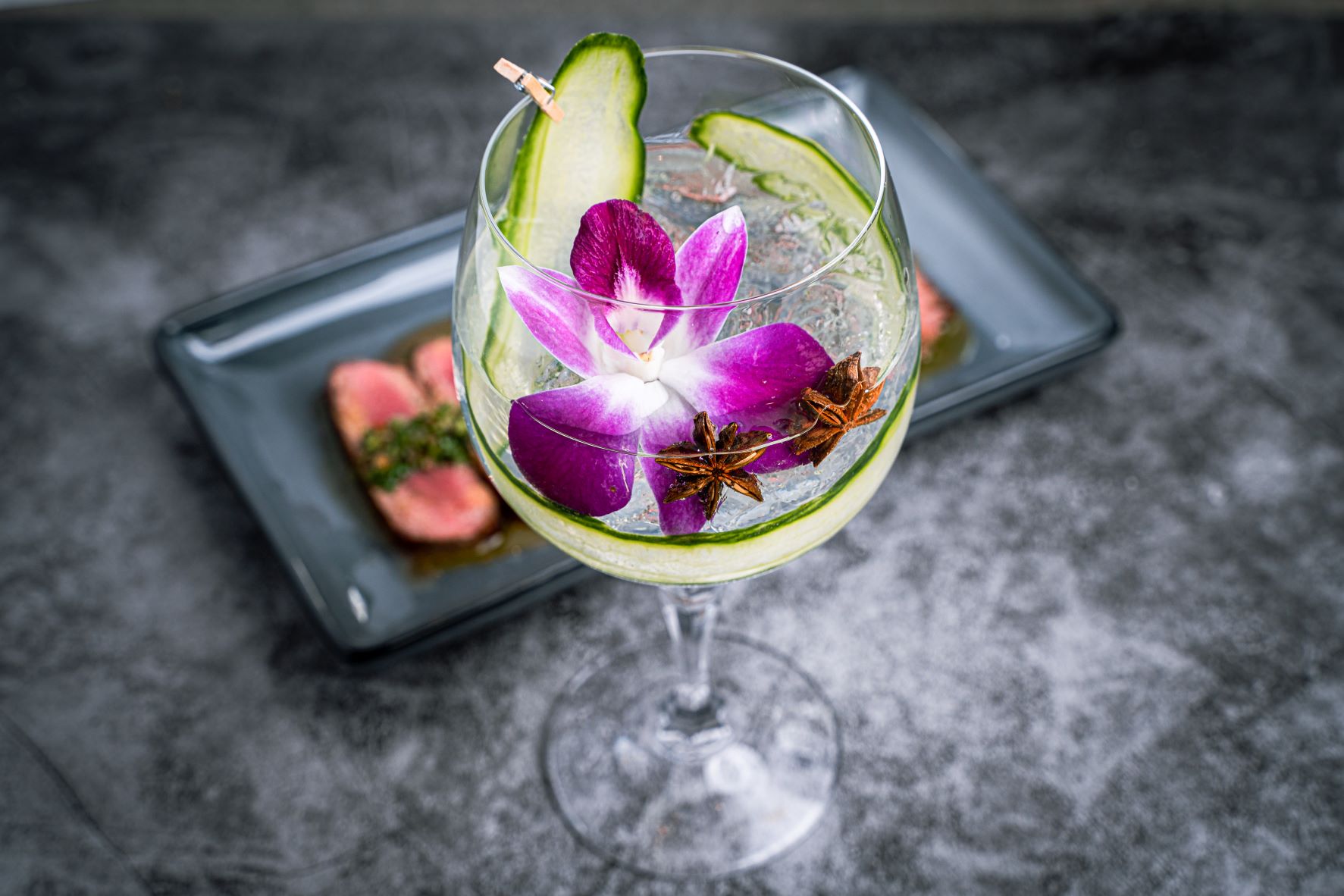 Chef Broening and mixologist Patrick Williams trekked to an authentic Mediterranean market in Parker scouring for ingredients to build out their parts of the restaurants. The Mediterranean Gin & Tonic arrives in a colossal glass, almost like an unfinished crystal ball. The accents of cucumber, an edible orchard and the aromatics of star anise bolster this traditional cocktail. Folks dining here won’t be wishing for well drinks, instead they’ll dream of Williams’ fluffy aquafaba in the Blood & Sand ($12) cocktail. It makes for a unique way to achieve the same silky egg white foam but instead uses the liquid in chickpea cans.

Even with such an elevated cocktail menu, their wine list receives the same level of attention. Rather than listing difficult to pronounce names alongside faraway places, visual learners can rejoice to see a map making each bottle’s homeland feel closer. Patrons tour the Mediterranean via plate and bottle without the hassle of a plane.

Three Saints Revival could easily change its name to four when thinking about another pivotal piece that diversifies this space. Yasmin Lozada-Hissom leaves a lasting impression as her desserts are often the final treat of the night. With six James Beard nominees to her name, this sweet treat is anything but an afterthought. Instead of starting with bread and olive oil, folks find the fruity qualities in olive oil with Lozada-Hissom’s Olive Oil Citrus Cake ($10). An ode to budino comes from the Chocolate-Salted Caramel ($10). The rich mousse-like cream on the bottom has dark chocolate notes and is enriched by the salt in the caramel topping.

The roaring sounds of the colors, flavor profiles and energy found by patrons unmistakably defines the space. It emulates the ’20s with libations, lavish lifestyles and a sense of unity between all it touches.