Rodeo Drive holds weight in California; the same goes for Wall Street in New York and the Las Vegas Strip. Colfax Avenue holds that resonance in Denver Metro Area, but Ulster Street put their name on the map as well. In part this was due to the help of Carolyn Nugent and Alen Ramos transforming their quaint white house sitting at the end of a quiet cul-de-sac into a French patisserie. These transplants kept on pace with the likes of New York, San Francisco and Chicago’s baking empires, which inspired their pop-up to continue even in the leisure lifestyle of suburbia. After capturing the community with airy Berliner doughnuts and mystifying bakes, their goods have a new home in Parker at an official storefront. Their space grew and so did the team as they tackle this long-awaited business.

The pandemic transformed everyday neighbors into artisans as people began baking out of their home kitchen, but in the case of Nugent and Ramos, they did the reverse. Their days of worldly travel with pit stops at three Michelin-starred restaurants being their playground for creating confections ended abruptly. But they had one last suitcase to pack as the final leg of their journey brought them to the Parker suburb of Denver.

The full family moves into Poulette as it welcomes Christina Hanks and Jacob Frajio to return to the team after a short break within their 11-year baking endeavor. Hanks and Frajio arrived for the building of Poulette and have the opportunity to impart their baking prowess to the community. Hanks specializes in the cake and pastry part of Poulette’s all-encompassing bakery, while Frajio is needed for his bread skills. Together, they offer bread, breakfast pastries and desserts ready to devour — saving patrons a car ride from having to head to three different places to get the same high-quality confections. 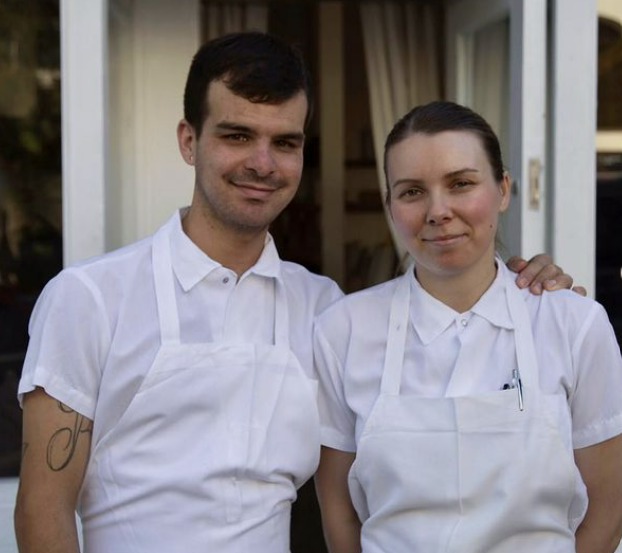 Hanks and Frajio return to bake alongside Nugent and Ramos to build on the past 10 years of their baking journey. Photo courtesy of Carolyn Nugent.

“In our big team, [Hanks and Frajio] were always standouts. We ran in the same circle. We traveled, learned and grew for 10 years. They belong here at Poulette just as much as Alen and I do. They are Poulette,” said Nugent. 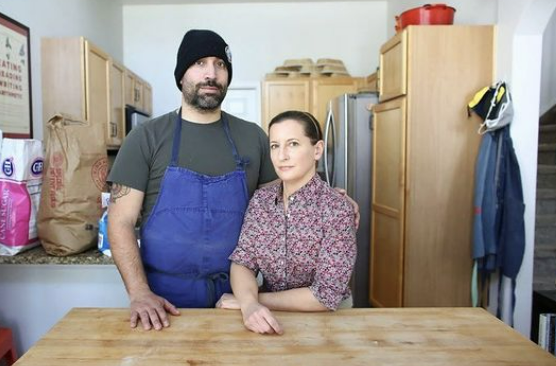 It’s been a little over a year since their first pastry pre-order pick up appeared like a lemonade stand outside their home. Since the beginning, their astounding talent showed through with the Apple Fritter ($5) with apple chunks large enough to be mistaken for bits of dough. Rather than a cinnamon roll, they featured salted caramel pecan sticky buns. The beautiful rise in the yeasted roll was ever-present instead of solely the sugary center being the most valuable piece. The salted caramel coats the entire top making each bite a golden nugget. They dipped into the savory side as well with chorizo, poblano and cheddar Scones ($4.75) — a clear tribute to the west with smoke poblanos and spiced chorizo making the mix. Breaking into one exposes each flaky layer similar to a pie crust, shortbread or taking apart a Pilsbury biscuit stack layer by layer. 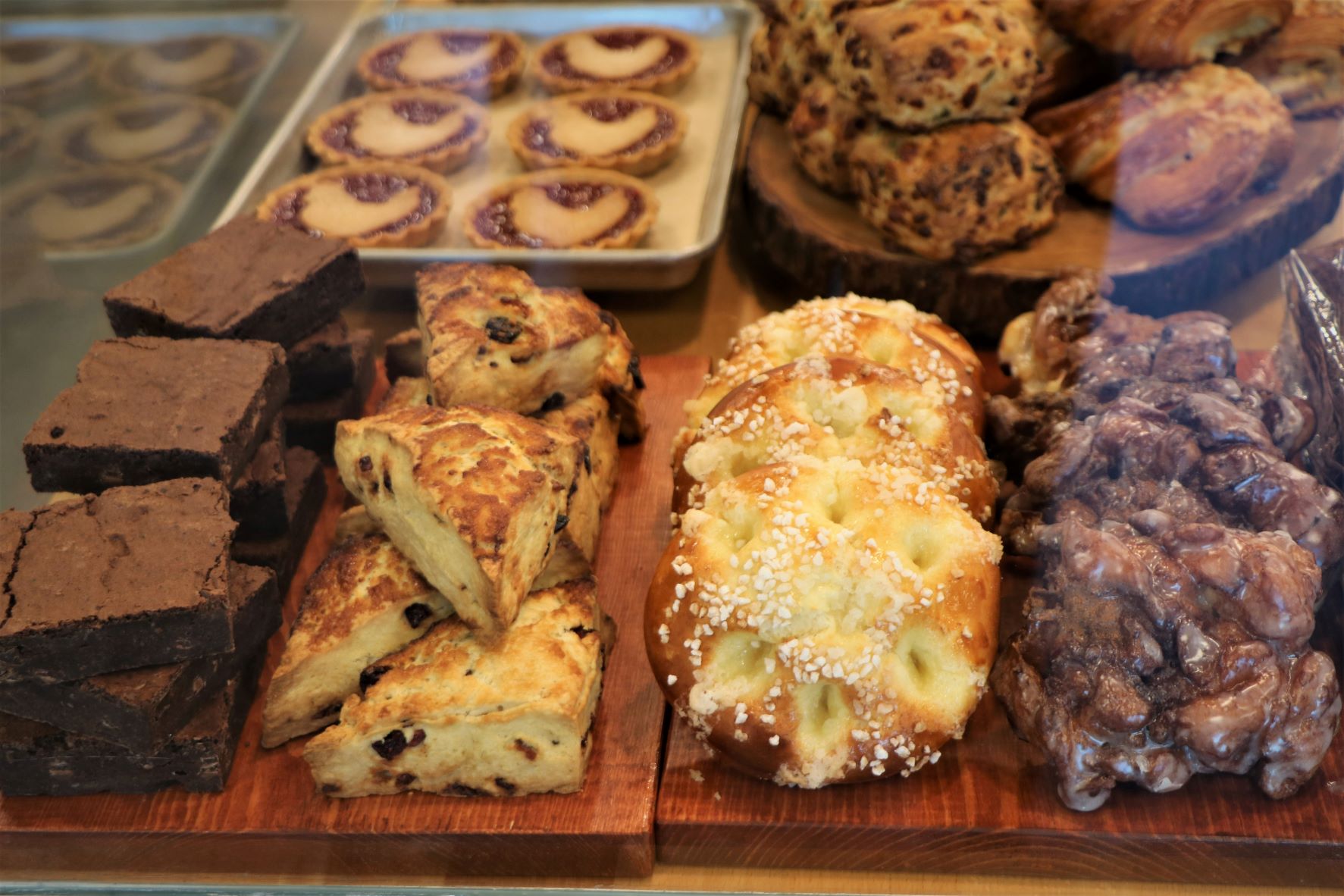 This new endeavor marks Nugent and Ramos’ quest to continue making their personal mark on the pastry scene of Denver, instead of continuing to produce the dreams of another. Their ability to break from the molded curriculum that fostered rigidity in recipes and bakes now takes the form of specialty offerings and constant menu changes. The Nutella stuffed Berliner defined their decadent menu and is set to return soon. But, they left room for sugar encrusted pate choux and a s’more crafted by hand with a surprise of smoked sea salt caramel waiting to be released from the center.

“Parker and Denver have gotten to know us, but I am thrilled to introduce them to the works of both Christina and Jacob,” said Nugent.

Their relatively quick transition demonstrates the demand their baked goods have. Even on the outskirts of Denver proper, their Parker location line still strings out the door prior to the 8 a.m. opening. Selling out is inevitable. This rush brings excitement into the eyes of the entire team. While the eight hands kneading, baking and creating on-site are what we see, Nugent and Ramos acknowledge the bonds within the industry that cemented their stay here.

“Our bakeries are community rather than competition. The way I see it is the more bakeries the better. We all do things a bit different and together we add so much richness to the town,” says Ramos.

Even Penelope Wong of Yuan Wonton raved about each box she treated herself to, which held weight as a leading female chef in the Denver food scene. Caroline Glover of Annette is a longtime colleague that provided space for pick-ups and a mind for collaborations. With a permanent shop in place, fans await a highly requested collaboration among this famous friend group. 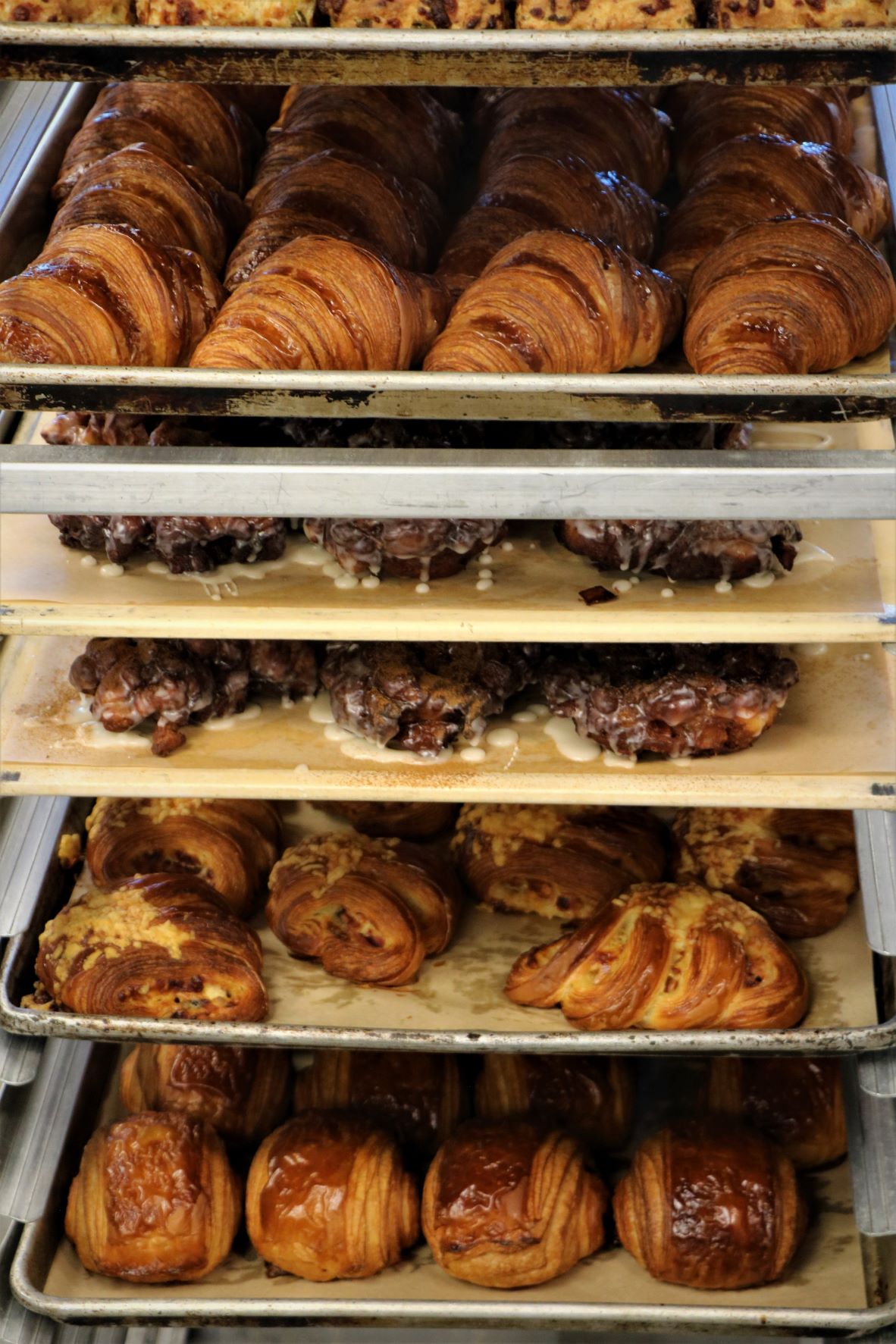 Pastries ready for restocking as the cases start to clear. Photo by Haley Paez.

Although this isn’t their official house, they define their time and dedication to perfecting the space as similar to homeowners. They wanted more than just the pastries to be homemade. The refurbished counter received the same delicate touch as laminating each layer of dough to ensure concentric circles of butter make the rich and flaky. Croissants range from plain ($4.75) and chocolate ($5.50) to almond ($6.50). It’s the encapsulating smells that draw people into a sense of nostalgia like pie sitting out on the window sill.

They instill that sense of authenticity early on with each excited patron that patiently waits to order. With their doors open, the team finally relishes in having that face-to-face connection with each individual they serve.

“We live to bake, but we don’t bake for us. Everything we do is to add to our community,” says Nugent. The giddiness to get to know the neighborhood more could be heard in Nugent’s voice with every word. 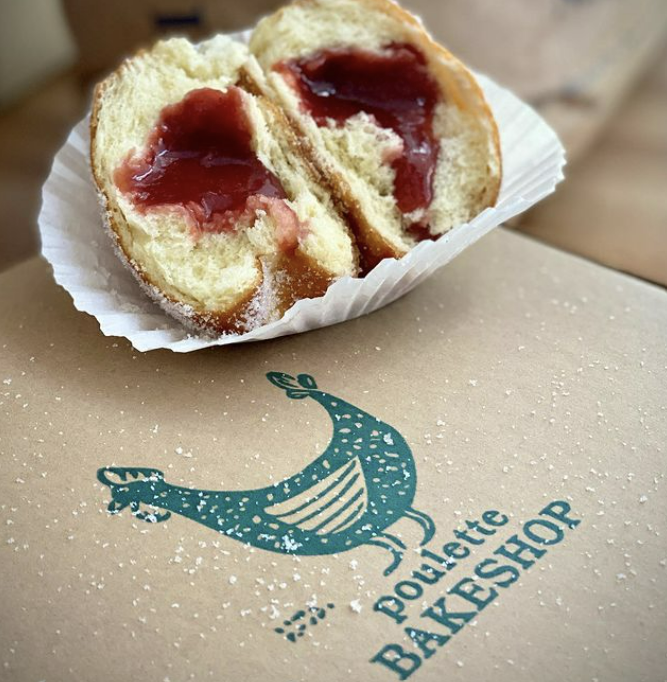 A box ready to be devoured. Photo courtesy of Carolyn Nugent.

Rest assured the community feels the same way to be graced with such a multifaceted spot. One order encompasses what could require multiple store runs. They hold experience across the board thus buying a baguette for sandwiches, a croissant for a morning coffee’s soulmate and a weightless angel food cake can all be found in one box. Their experimenting is far from over which brings cakes and unique French bakes on the horizon. Each surprise offering attains the same sold-out signs as their now-iconic items.

Patrons know to trust Poulette bakery, and newcomers are quick to understand as it roots the whole operation together.

Home is where the heart is — likely both can be found at Poulette. 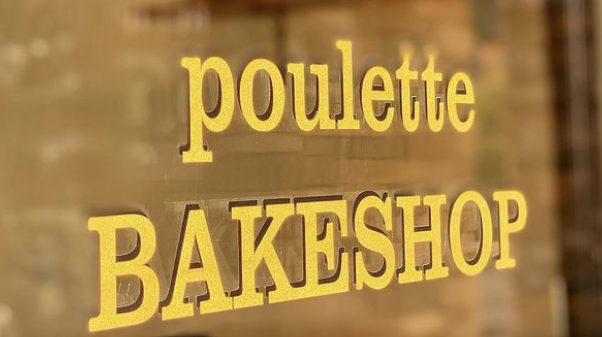 Folks can stop by and meet the team Thursday through Saturday from 8 a.m. to 12 p.m.. The lines begin before 8 a.m., so true fans opt for pre-order securing their pastries at any arrival time during their open hours. Preordering takes place on their website.