Jake Riederer’s lasting experiences in the restaurant industry undoubtedly shaped his goals for his newest endeavor — a sandwich shop that cultivated a menu described by far more than fusion. As many have, Riederer saw all the ranks that go with getting invested in the culinary lifestyle. He bussed tables as a boy, hiding among the dishes loading up the sink pit and charming customers for that extra cash tip. Riederer found comfort working out front or in the kitchen as both sides felt like his house.

OPEN had a temporary stint in American Bonded for its beginnings but now finds residency within the historic Goosetown Tavern, first welcoming in the surrounding community of City Park since 1998. Open searched for permanent home and found it on October 1. Alongside the spray-painted mezcal sign now sits the forever glowing graffiti OPEN sign, signaling their relationship is cemented. It melds with Riederer’s concept of showcasing the creations of chefs that are imprinting their own mark on the history of the Denver food scene.

READ: ‘OPEN’ in RiNo Serves Up Six Sandwiches Made By Some Of Denver’s Best Chefs 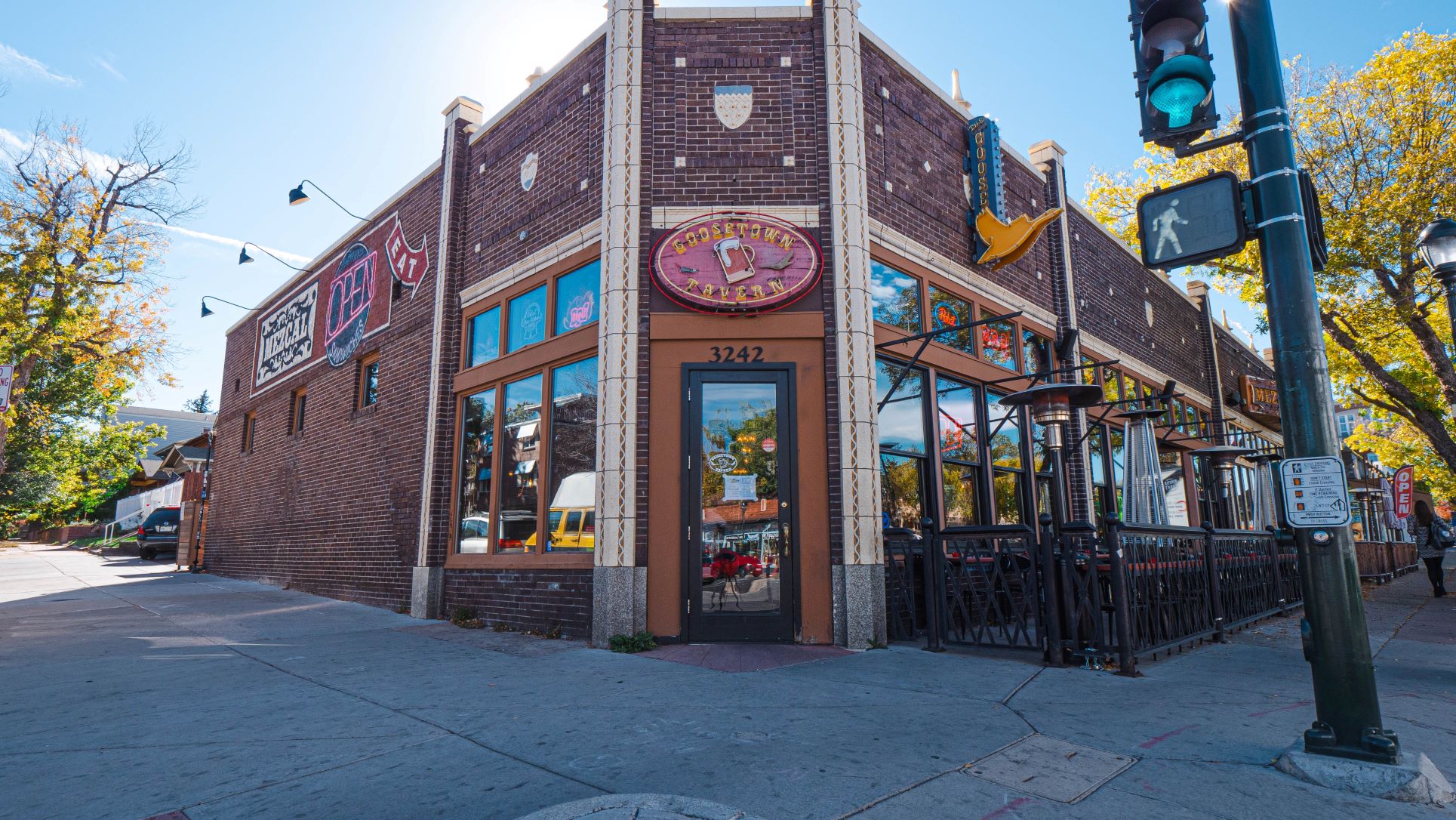 Open sits inside Goosetown on Colfax. Photo by Corey O’Flanagan.

“The first thing everyone learns in the restaurant industry is ‘don’t open a restaurant.’ It’s a grueling game. For me, it’s the industry that I found purpose and passion in, so here we are,” said Riederer.

He settled in corralling his calling among management and left the cooking to the chefs. He’ll be the first one to say he won’t be the one wearing a chef’s hat.

Nevertheless, he finds his voice in the storytelling and unity that draws chefs to the industry. Rather than having ingredients come together to harmonize into a story, he cultivated that in the construction of his restaurant concept — OPEN. The amorphous term eloquently describes the inclusivity of those enjoying a meal here and what they get from it. 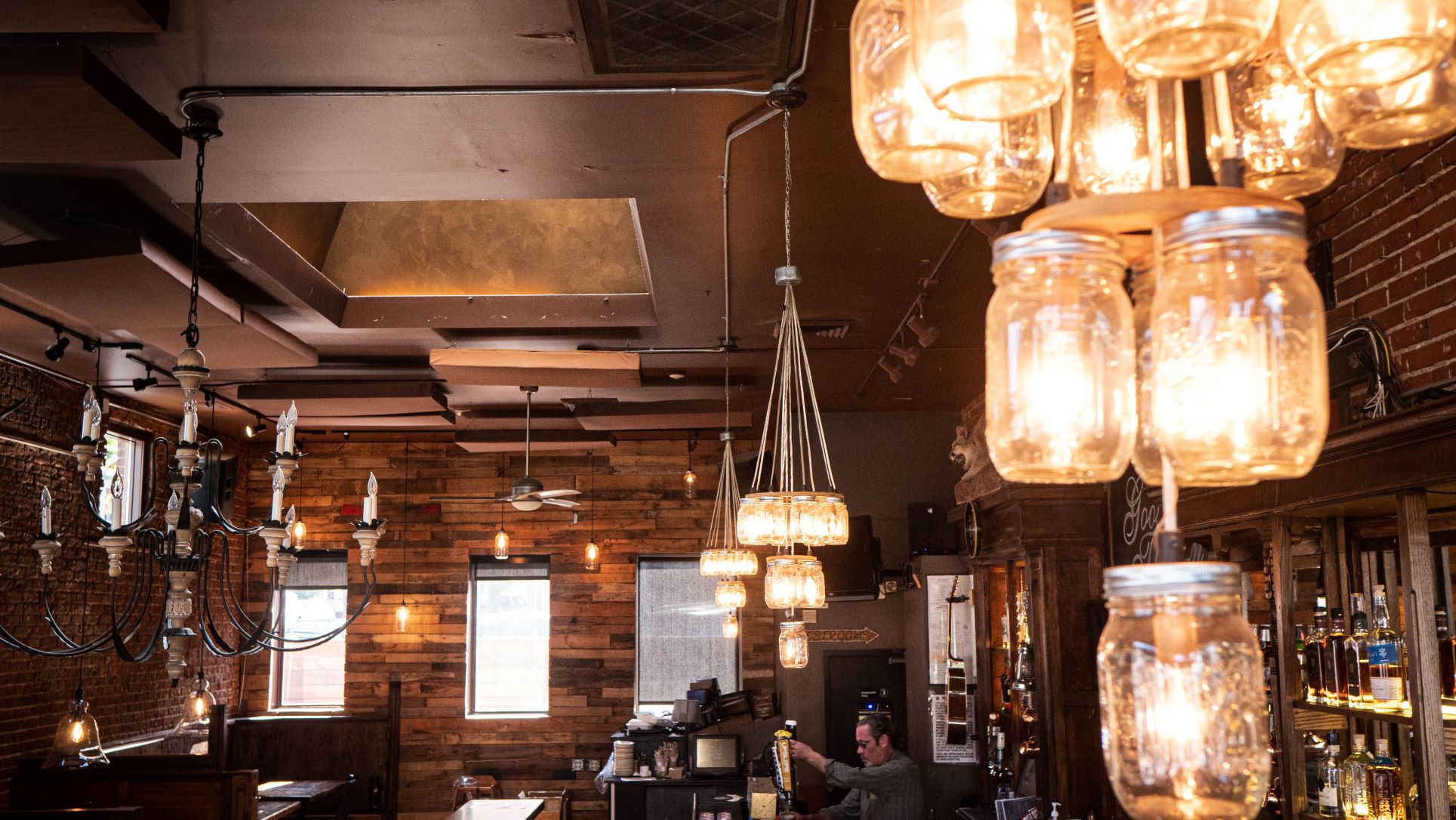 You won’t find a deli at this sandwich spot. Photo by Corey O’Flanagan.

“Everyone should feel like they belong here whether they dine at the most exclusive restaurants or they’re just hungry and stumble in,” said Riederer.

One glance at the menu and the idea of a typical sandwich shop saturated by deli meats and suspect tuna salad won’t be found. It’s clear that the comforts of peanut butter and jelly spilling out of Wonder bread will remain in the homes of those surrounding. While nostalgic, they are replaced but some of Denver’s upper echelon of chefs making their acclaimed flavors come alive among the simple pleasure of sliced bread. The collaborative chefs came together with Riederer’s team to educate them enough to ensure their mini-masterpiece is far beyond a typical settled-for lunch.

Some of Riederer’s friends featured include chefs from the Cherry Creeks beloved sushi spot Matsuhisa, Osaka Ramen where slurping noodles is a common sound, the essence of Denver’s Chinatown through Hop Alley and the newly added queen of dumplings roaming Denver, Yuan Wonton, as of now. Much like the name, there are always openings for expansion by welcoming more chefs to implement themselves through sandwiches. Riederer plans to rotate more visions within his restaurant as his time there ticks on. Even in such a small line kitchen, the execution of intricate sandwiches remains. 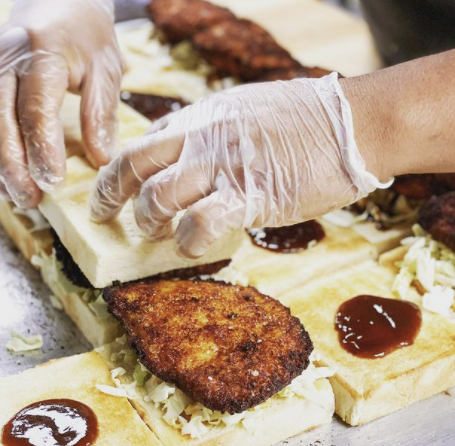 Chef Toru Watanabe forgoes his sushi blade and raw preparation for a fried delicacy. Fried chicken sandwiches enthrall most Americans. However, in Asian cooking the flakiness of panko-breaded pork cutlets reign supreme. The shreds of cabbage can be thought of as the slaw and the creamy element is provided by Japanese mustard. The pepperiness and heat similar to horseradish resonate with a nod to the well-known Nashville hot chicken. 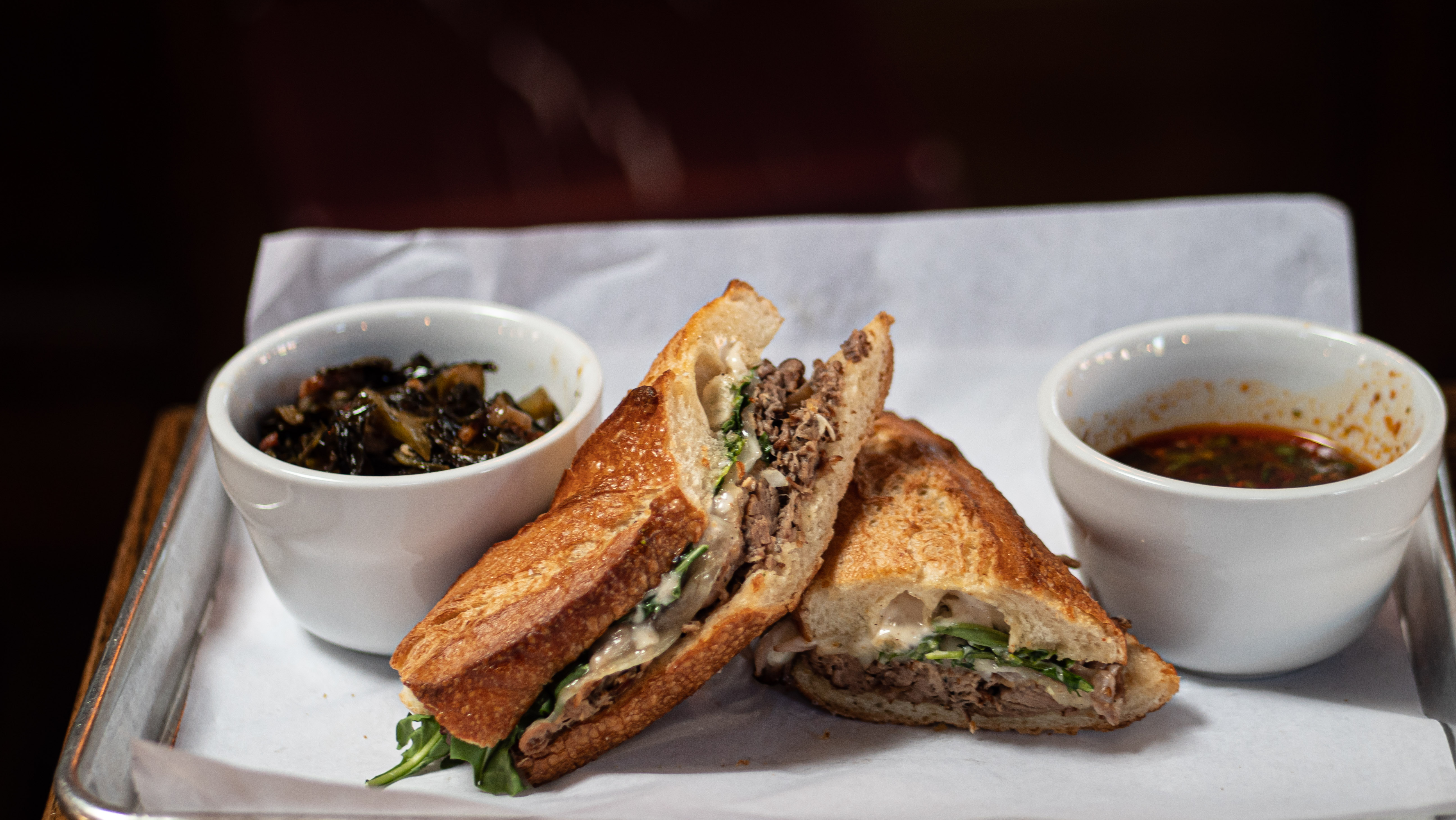 It appears as though chef Tommy Lee pivoted from his connections with Chinese cuisine for the French dip.  Rather Sichuan flavors convert into an unconventional sandwich form. Peppercorns saturate every thin slice of braised beef and are finished with coats of provolone. The balance comes from aromatics like scallions and cilantro. The crust on the baguette luckily soaks up the Sichuan juices provided as a side to dip. 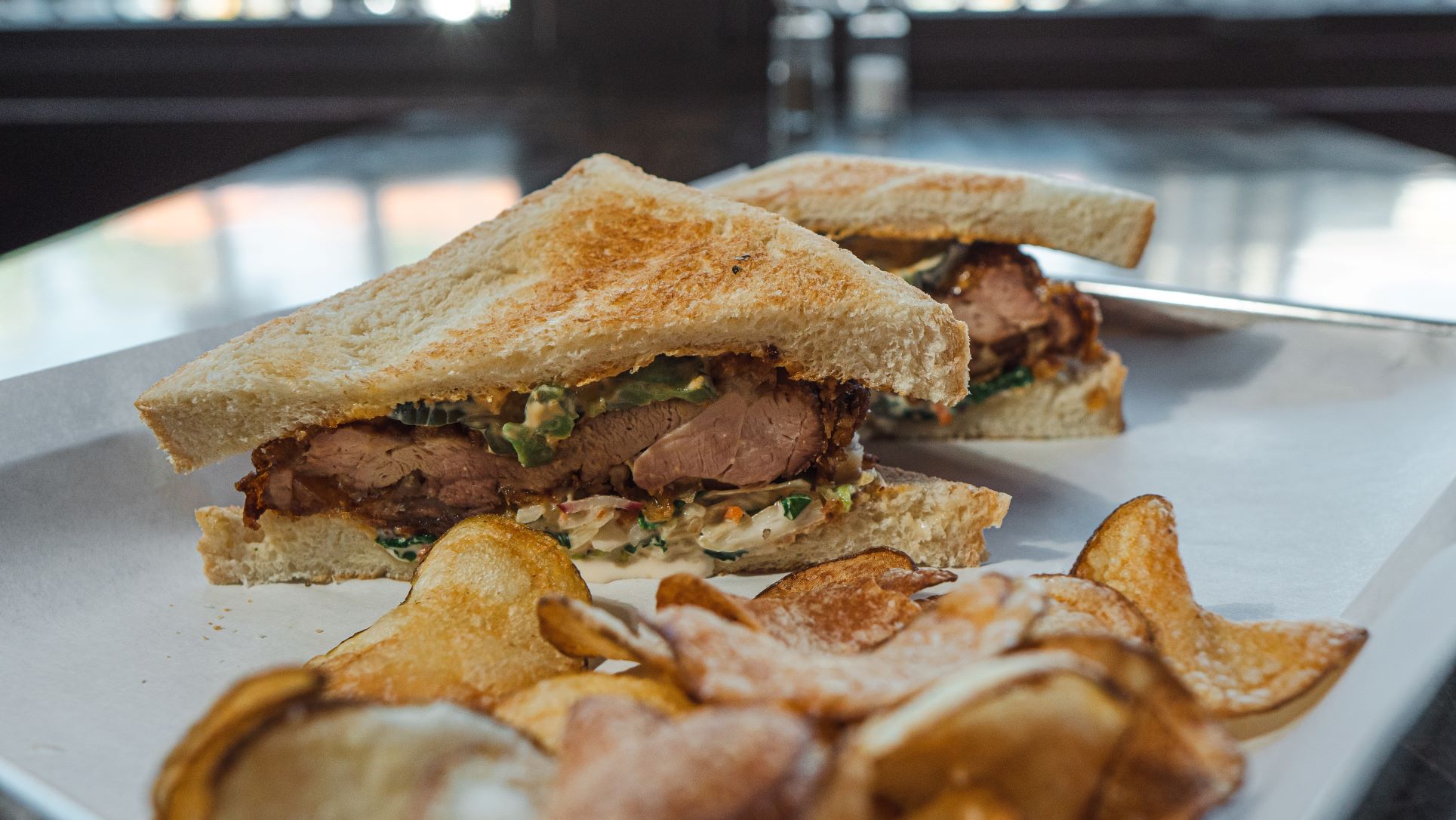 Osaka Ramen implies the menu’s focused on broths and endless chains of noodles. However, attendees crunch instead of slurp as a must-order is chicken kara-age. Therefore, Jeff Osaka stuffs his sandwich with these fried chicken thigh delicacies. The key is ditching a flour dredge and opting for one that creates a thin crispy shell-like rice flour or potato starch. Slaw adds to this load with color and slightly marinated pickles honor its crunch in every bite. 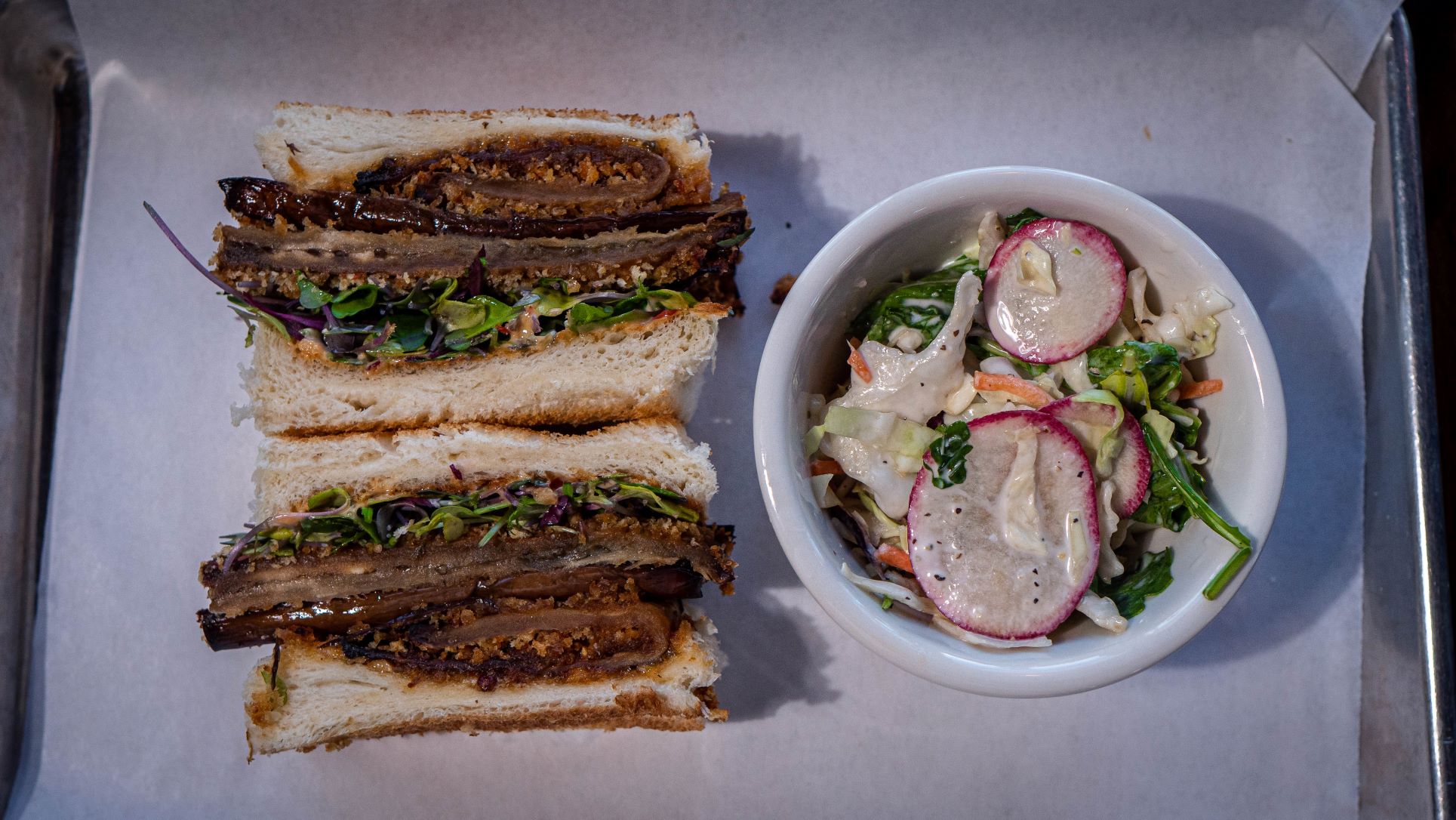 Most people experience eggplant through a parmesan coating and surrounded by spaghetti. Penelope Wong can do no wrong when it comes to experimenting with food as she does it regularly with surprise specials on each pop-up menu. Therefore, instead of transforming her iconic chili oil dumplings into a sandwich, she utilized another staple from her pantry the underappreciated eggplant. It receives a similar pampering as the pork katsusando.

Three out of the four sandwiches are woefully incomplete without the plush white bread. This bread leaves easily in wonder but that’s not the brand, instead, it’s known as Shokupan — Japanese milk bread. Its popularity touches most cities with artisan Japanese bakeries carrying it — requiring them to ship it in constantly. Now they partner with a hole-in-the-wall spot in Broomfield, The Enchanted Oven.

There’s no short of surprises that came after opening these doors.  The on a whim decision continues to come to fruition. But it doesn’t feel like that at all. So is this unlikely crew the family everyone thinks a should be restaurant should be?

“We are a well-oiled machine. Families are dysfunctional, think of your own,” Riederer says with a slight laugh. “We are a team. We dive in together and execute great work and that’s what I want it to be.”