Review – “The Lifespan of a Fact” Negotiates Authenticity vs. Accuracy

Known for their thought-provoking commentary on societal issues, Curious Theatre Company started their 24th season with a remarkable question: What are the standards for a fact? Truth, or accuracy? As it turns out, those ideas are not interchangeable.

The Lifespan of a Fact made its regional debut at Curious Theatre Company on September 18, 2021. The stage play is loosely based on a book with the same title. Accordingly, the book is loosely based on real events. In 2002, Levi Presley, a teenage boy from Las Vegas, jumped 1,149 feet from the observation deck of the Stratosphere Hotel.

Real-life essayist John D’Agata, a Las Vegas resident, wrote a heart-wrenching investigation of Presley’s death and its larger connection to Vegas’ consistent ranking as the most suicidal city in the U.S. In real life and fiction, D’Agata is not known for prioritizing accuracy in his work. Meanwhile, Jim Fingal, a real-life editorial fact-checker, was assigned to fact-check the piece. It caused an enormous rift between the two spanning seven years. The story finally went to publication in Believer Magazine in 2010. In 2012, they published a book about their relationship, titled The Lifespan of a Fact. In 2018, an adapted stage play premiered on Broadway. 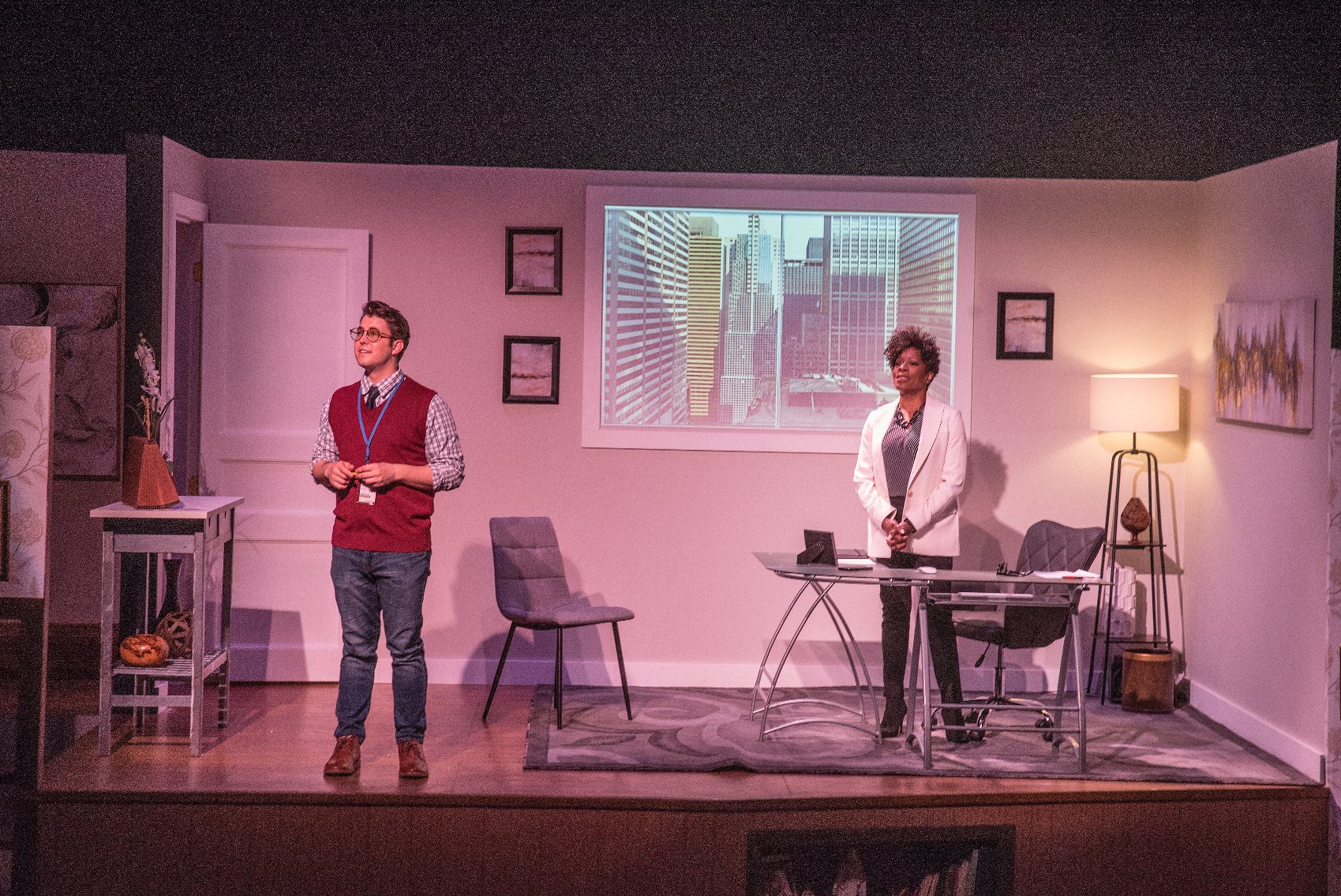 Emily is smitten with the story and asks Jim to give fact-checking “a good faith effort.” Jim dives into the assignment and finds a host of inaccuracies. He reaches out to John to resolve the discrepancies, an effort met with the writer’s immediate refusal to alter the piece.

John D’Agata (William Hahn) enters roughly 30 minutes in with a striking stage presence. With a tall and lanky frame, Hahn has no trouble taking up space. His energy reverberates throughout the whole production. It deepens the intensity of his central struggle with Jim, who is hyper-focused on precision. John takes a less aggressive approach to fact-checking in favor of style and authenticity.

At one point, John remarks “I take liberties with things that deepen the central truth of the piece.” To a degree, John’s right: Certain liberties strengthen a narrative; others damage the integrity and credibility of a piece. John takes both types of liberties, the most serious of which is lying about another teen suicide. On the same day Presley jumped from the Stratosphere Hotel, Lorenza Ortiz, a teenage girl from Las Vegas, also jumped off a building. But John wrote she hanged herself to keep with “the rhythm” of the piece.

Emily takes a hard stance here; she’s uncomfortable with the blatant erasure of Ortiz’s story and potential legal repercussions. It takes more than one conversation to convince John this detail constitutes a lie. It’s a lie that, if published, threatens the credibility of the story and magazine. Referring to journalism, Emily reminds John, “The entire enterprise depends on trust.” 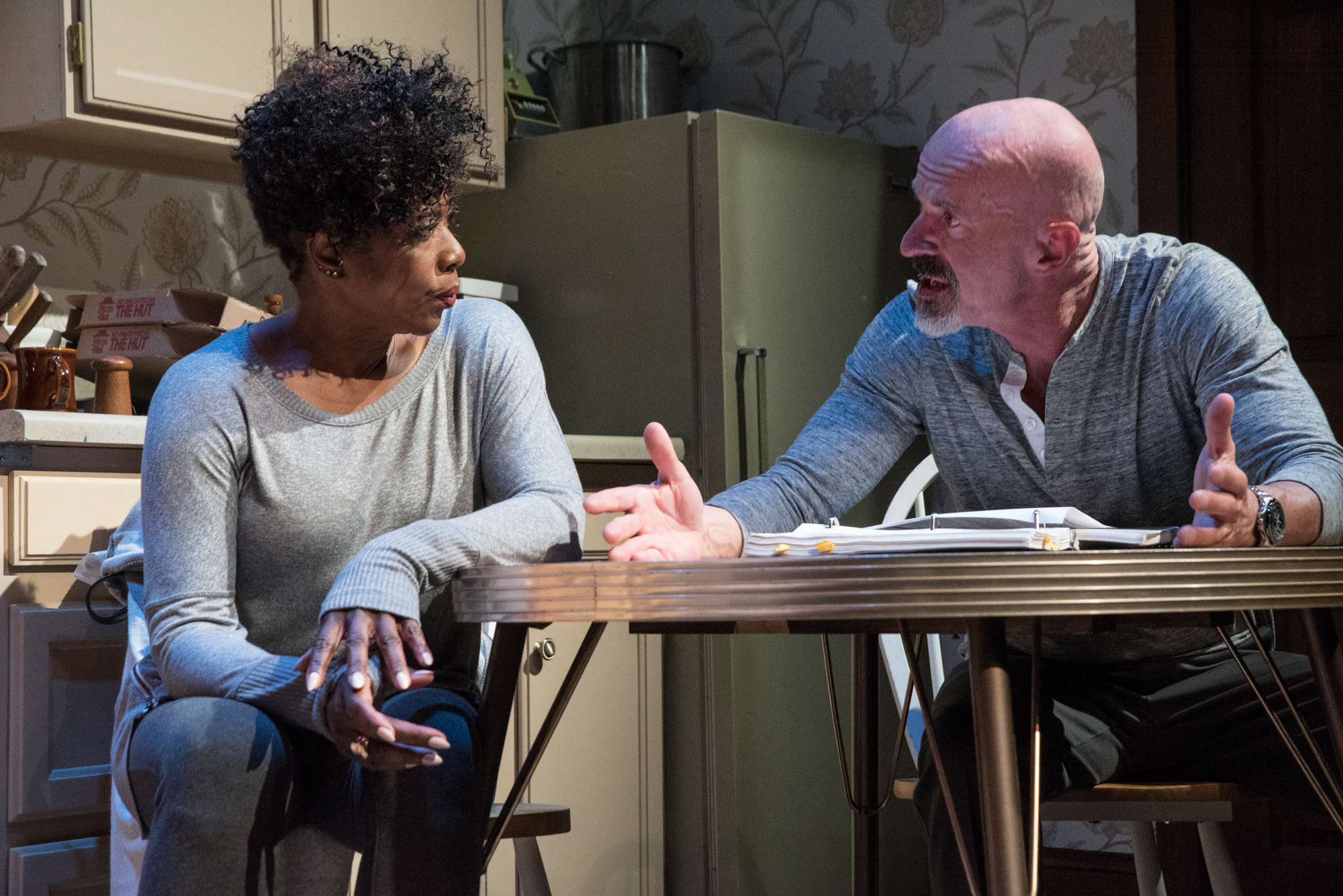 Meanwhile, Jim falls into an obsessive fact-checking rabbit hole — exaggerated to entertain the audience. Less than 36 hours from publication, Jim flies out to Las Vegas to sort things out with John in person. Here, his fixation reaches its peak.

In John’s living room, an unhinged Jim notes the story claims the moon was half full on the night of the incident. Only 16% of the moon was actually visible. While the audience cackled at Jim’s commitment to moon charts, they also began to uncover some of the fundamental questions raised by the play. What facts need to be precise, and who makes that judgment? What is the difference between a minor descriptive detail and an important fact?

Emily suggests the difference lies in statements with consequences. No one cares if the moon was really half full on a given night, but they will certainly care about false reporting of another teen suicide. Put another way: Information that informs how people see the world must be correct. In an era of fake news and widespread misinformation, it feels more important than ever to maintain standards for what types of information need to be accurate. Unable to grasp this grey area at first, Jim remains steadfast in his frustrations. Exasperated, he says to Emily, “I don’t have a codebook that tells me what matters and what doesn’t.” Emily replies, “There is no codebook, it’s called judgment.” 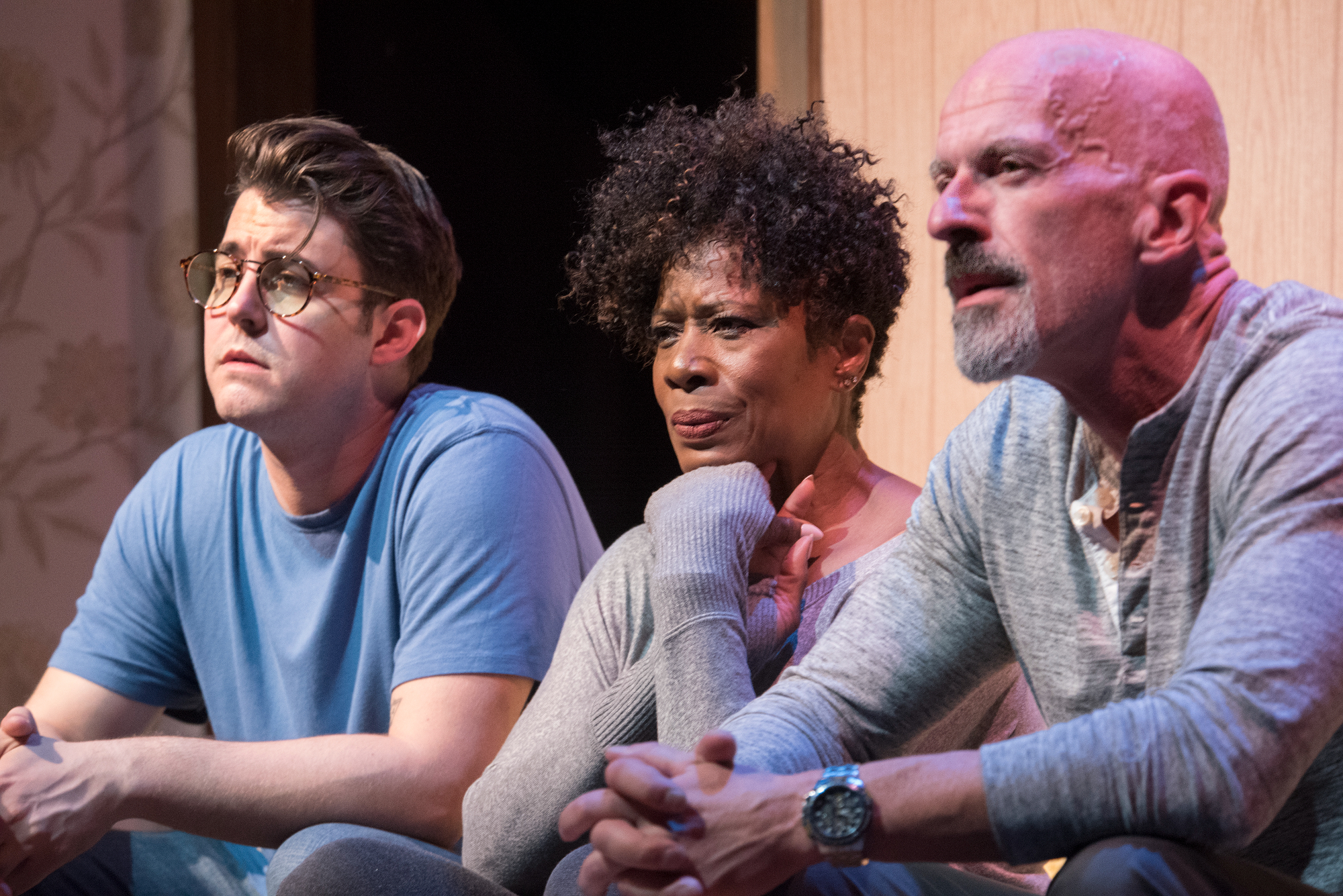 The company’s production team added depth with costumes and blocking. Emily, who represents the nuanced judgment of information, wears grey for the climax and falling action. Her ensemble is a nod to the grey area most storytelling falls into.

Throughout the play, Jim and John are each other’s foil, often standing at opposite ends of the room. Each represents one extreme, while Emily stands or sits in the middle, trying to negotiate and find a middle ground. The blocking is simple, clever and effective. It highlights polarity between the two men and illuminates Emily as the play’s center of gravity.

The Lifespan of a Fact is a smart portrayal of the conversations surrounding truth, accuracy and judgment in storytelling. With sharp dialogue and heartfelt characters, the play tugs at some of our deepest fears surrounding the world we live in: How do we know what’s real? How can we trust media to present us with accurate information? Can we negotiate facts?

The Lifespan of a Fact runs through October 16. You can find a full list of productions in Curious Theatre Company’s 24th season here.