Greenwich Village in New York has its roots in Bohemian culture. It has been home to artists, musicians and misfits who propagated alternative lifestyles and progressive attitudes. History was made there and the Manhattan neighborhood still holds on to the original character and community identity despite the rising cost of living. Delores Tronco’s newest restaurant — The Greenwich — pays homage to its namesake neighborhood through its warm hospitality, vibrant energy and spirit of inclusivity in the heart of RiNo. 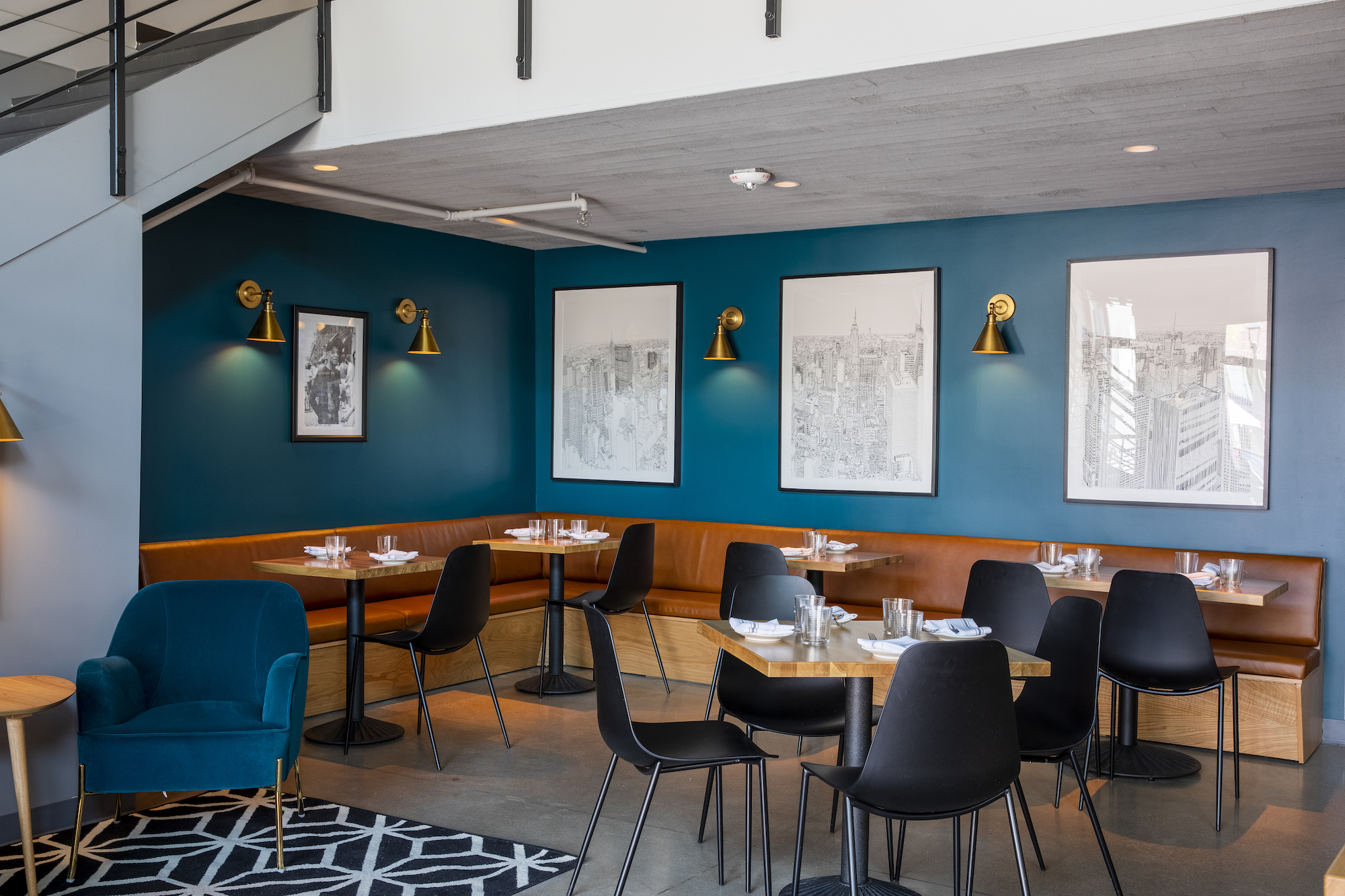 Tronco emerged into the Denver restaurant scene in 2014 with the opening of her first restaurant — Work & Class — alongside Dana Rodriguez and Tony Maciag. She worked in the restaurant industry for years leading up to the opening and it was a huge success. “At the time RiNo wasn’t the way it is now. There was a feeling of ‘what if?’ What if we’ve gone through all this work and no one shows up?” said Tronco. “Well, people did show up. A lot of people.” Work & Class became a cornerstone of RiNo and contributed to the development of Larimer Street to make it what it is today.

After three years there, though, Tronco was ready for a challenge. Her father was originally from New York and throughout her life had always compared restaurants to those back in the city. “I was at a crossroads in my career and New York had been calling. I wanted to challenge myself to get out of my comfort zone and open a restaurant there,” said Tronco. After working as a server at several restaurants, going to wine school and talking to anybody who would listen about her idea, she opened The Banty Rooster in December 2019. “In the way New York does, it will humble you. It will bring anybody to their knees but it’s also an amazing place full of opportunity,” Tronco said. The Banty Rooster saw great success at the beginning, but at the epicenter of the pandemic, it could not survive. 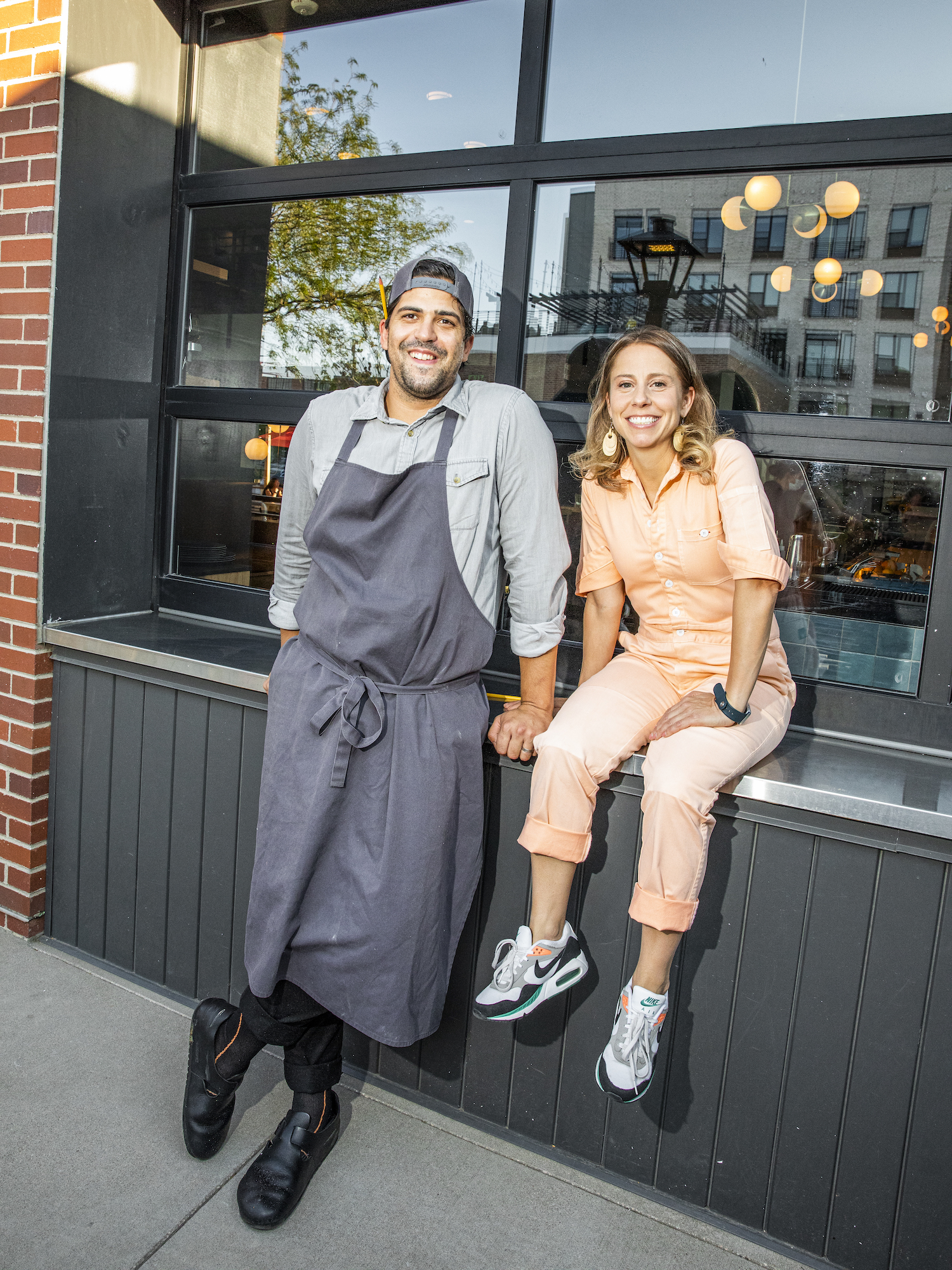 Tronco decided to come back to Denver and open another concept. She knew she wanted to be on Larimer Street and when Julep shut its doors, she knew it was the perfect opportunity. “As I started to think about what the new restaurant would be, I knew it needed to be the inverse of the Banty Rooster. The Banty Rooster was a tribute to the Southwest and my time spent in Colorado and New Mexico. The Greenwich is bringing my slice of Greenwich Village to Denver,” Tronco explained.

The Greenwich was designed to make you feel at ease. Its menu is elevated yet unpretentious, its design is distinguished yet comfortable. “The last couple years have been so awful for so many people — especially those in the restaurant industry. People always talk about how I’ve been so resilient throughout this. But I don’t want to be resilient anymore. I don’t want to have to be tough, I want to exhale and have some joy. The Greenwich is about that,” she said.

The interior was designed 100% by Tronco and features a mix of deep and teal blues paired with white oak wood accents, everglade green, black and cognac finishes along with a bounty of artwork. Much of the artwork — including the murals outside — is an ode to the well-known photographer and Tronco’s friend, Ricky Powell. Powell played an integral part in documenting pop culture in the city and his street photography is particularly lauded. “He noticed one of his pieces in The Banty Rooster and ended up coming into the restaurant a lot. We became great friends,” said Tronco. Unfortunately, Powell passed away earlier this year and much of Tronco’s inspiration for The Greenwich pays homage to his life. You’ll find his photographs throughout the restaurant depicting various scenes from the streets of New York. 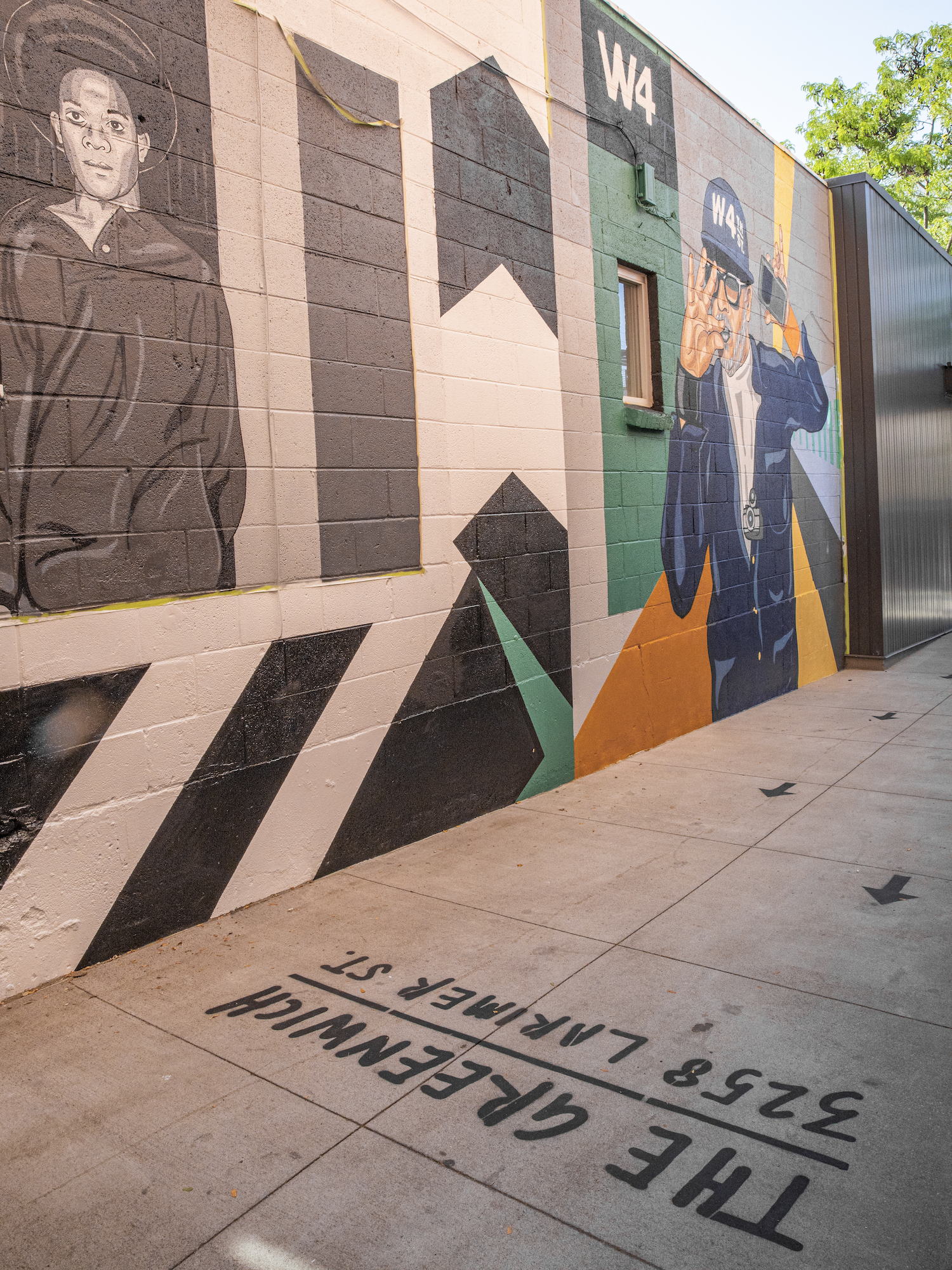 With executive chef Justin Freeman — formerly of New York City’s Upland, Harlow, Nobu and Seamore’s — at the helm of the kitchen, The Greenwich brings an approachable, family-style menu to the table that’s influenced by New American and Mediterranean cuisine. Freeman’s focus is on seasonal vegetables, locally sourced meat and pizza “pies.” Every item on the menu incorporates something unique to put an interesting twist on classic dishes. The menu begins with starters that include roasted clams with scape butter, lemon and sourdough, snapper crudo with ginger-lime vinaigrette and crispy rice pearls and house-made bread with garlic scape butter that Tronco jokes should be its own food group — upon reflection it absolutely should.

The pizzas are presented as an appetizer rather than the main course and include a margherita pie with fresh mozzarella and basil; a mortadella pie with pistachio pesto, burrata and fennel pollen; a pepper pie with peperonata, anchovy and crescenza and a white pie with fresh mozzarella, provolone, seasoned ricotta and house made hot sauce. The pies are a unique take on wood-fired pizza and definitely worth ordering. 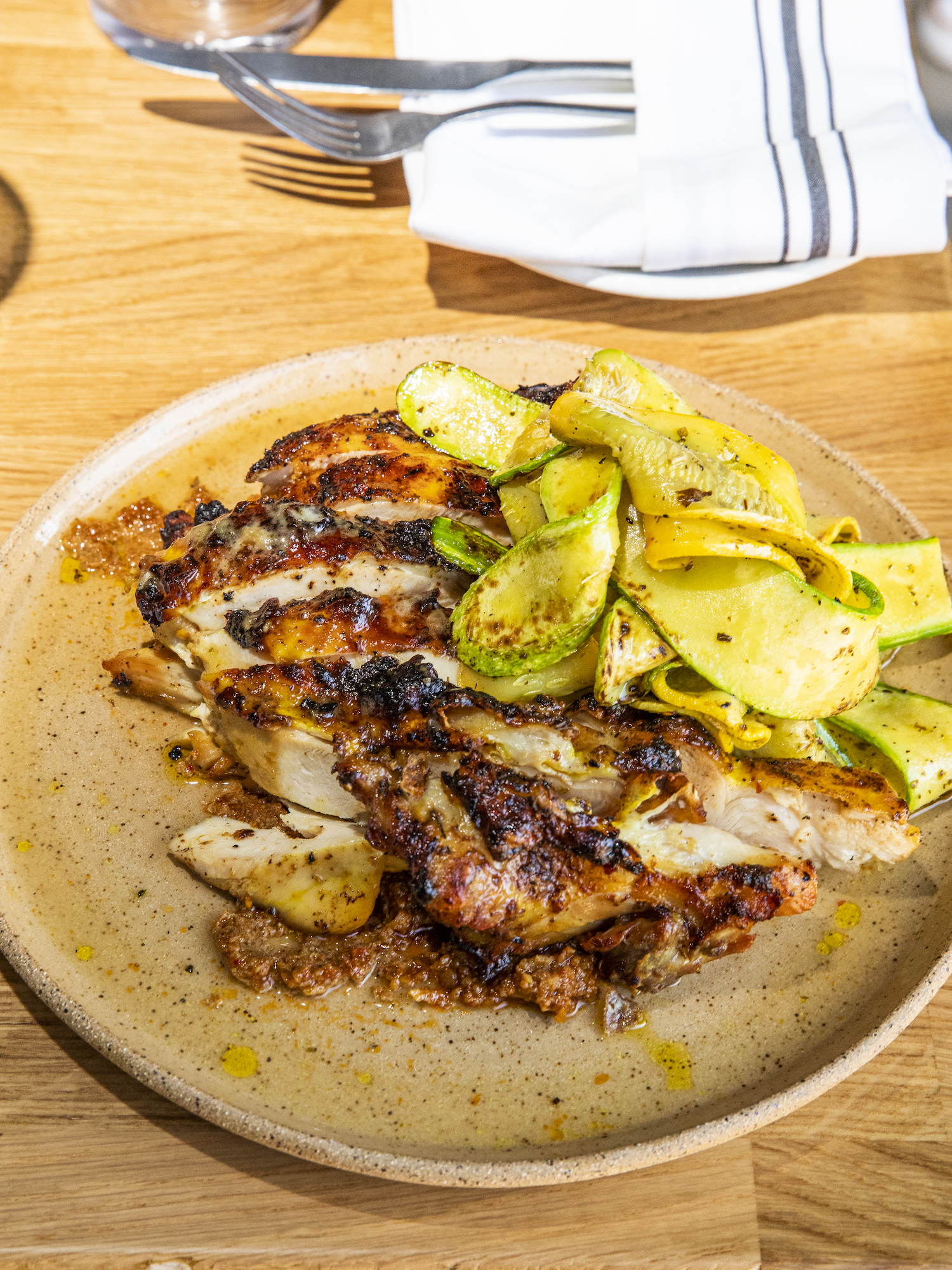 The main dishes may sound traditional at first glance but Freeman does an incredible job at making the ordinary extraordinary by incorporating different flavors into dishes that are usually seen as “safe.” The lemon roasted chicken is perfectly cooked and juicy and the addition of chile lime pepita makes it pop. The pork cutlet is an enormous portion of pork served with creamed corn chermoula and pea shoots to bring fresh flavors to a traditionally heavy dish. The swordfish incorporates stewed beans — something we don’t normally see paired with fish here in Denver.  The Greenwich also offers an extensive in-house bread program that churns out a variety of specialty loaves and pastries — you definitely don’t want to miss out on the bread.

The cocktail list is inspired by — you guessed it — New York. Drinks like Autumn in New York with bourbon, ginger, apple and fall spices; South Street Seaport with St. George dry rye gin, peppercorn, lemon, egg white and olive oil; and The Bowery with tequila, honey-ginger, lemon and nutmeg grace the menu. The extensive, exciting wine list features varieties from France, Spain, Italy, Chile, Argentina and Oregon that are noteworthy and affordable.

If you’re looking for a place to “let your hair down,” and enjoy a truly delicious meal, head to The Greenwich. It’s a little slice of New York right here in the heart of RiNo.