Buckle up kids, it’s cuffing season. That’s right, the days are getting shorter, the weather is getting colder and people are frantically swiping right in the search to find that special someone to stop Aunt Linda from asking them why they’re still single at the family Christmas party.

But how exactly do we know our dating profiles are up to par? That’s where comedians Hannah Jones and Alec Flynn come in. 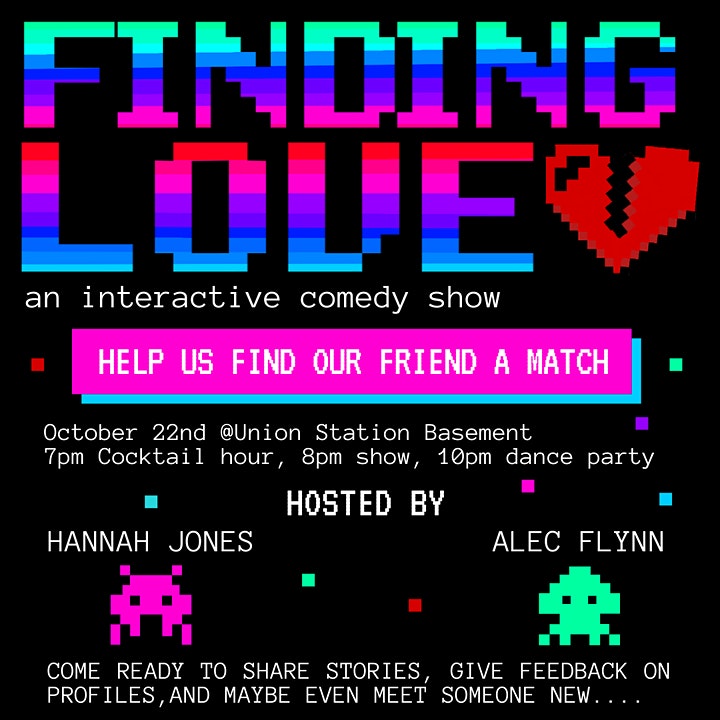 This Friday, join the two comedians as they host Finding Love — an interactive comedy show that explores the dating app scene in Denver. Both “hilariously single,” Jones and Flynn will spend the night dissecting their own dating profiles and that of other Denver comedians in an effort to find the answer to the age-old question: What the hell are people looking for?

Held in the basement of Union Station, the night will start with a cocktail hour, offering all us singles the perfect opportunity for a meet-cute at a comedy show. The show starts at 8 p.m., kicking off a night of stand-up comedy and dating advice — because who better to dish it than two single people? And don’t worry, if you didn’t find the one at cocktail hour, the night will end with a dance party after the show.

Hosts Hannah Jones and Alec Flynn are two Denver comedy favorites. Flynn, host of Sunday Funday at Improper City, is a regular at shows around the city, as well as host of his solo podcast Transplants. Jones, along with her stand-up, is the host of Uncorked! Comedy Night at The Infinite Monkey Theorem. Together, the two co-host the podcast Finding Love, and both recently made their first appearances at the infamous High Plains Comedy Festival.

Join the comedy duo this Friday night at Union Station for a night full of laughs as they search for love. Tickets to the event are $10, but the dating insights you’ll receive are priceless.

Finding Love is an interactive comedy show hosted by comedians Alec Flynn and Hannah Jones. The event will be held on October 22 in the basement of Union Station. Instructions will be sent out beforehand to find the venue. Cocktail hour will begin at 7 p.m., with the show starting at 8. Tickets can be purchased here.