The idea behind Deeply Rooted Music School was planted in the head of former teachers, Joel Zigman and Sam Goodman two years before the building had its official opening this past Saturday. The school in Arvada— off of Wadsworth and 66th Avenue is all about music.  Zigman and Goodman — both of whom are involved in the local music scene and trained with classical backgrounds — wanted to focus on student-led experiences in the instructor setting as opposed to performance-based ones. 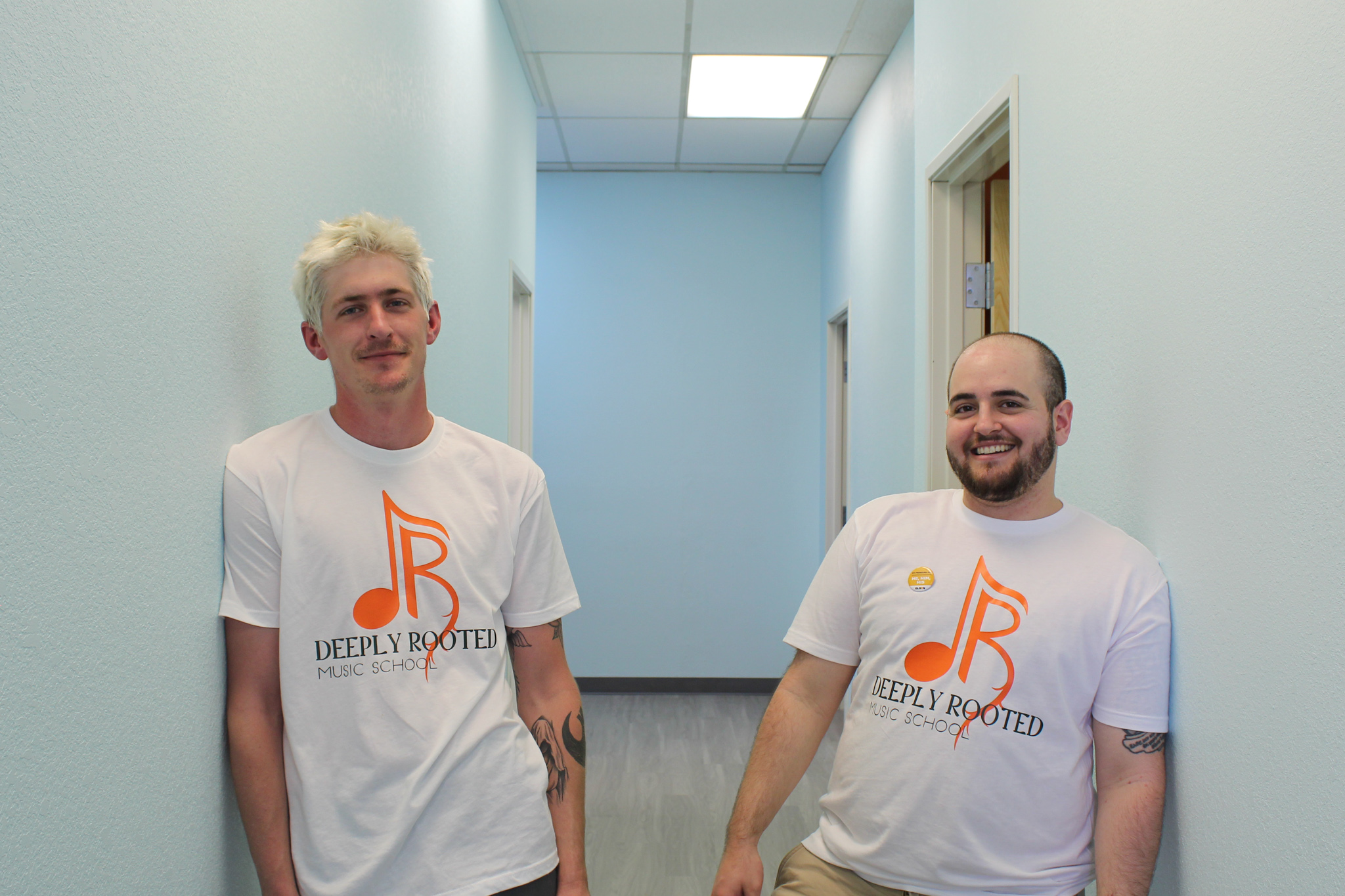 The two instructors taught at neighboring elementary schools and later met after being introduced by their district’s Music Curriculum Coordinator. Having shared similar philosophies and ideas for their learning environments the two became friends and business partners. 303 Magazine stopped by Deeply Rooted Music School with the two founders in their studio (still under construction) days before its opening to find out what differentiates them from classes taught in schools.

“I think the biggest [difference] is that it’s not just based off of playing somebody else’s music. Growing up as a classical violinist, all I learned how to do was play Bach and play Beethoven. I think an easy way to access kids is to have them doing more composing and creating,” stated Goodman.

Feeling held back in the confines of the district’s rigid syllabus plans, the two teachers left the traditional setting and decided to start their own music school for all experience levels and ages. 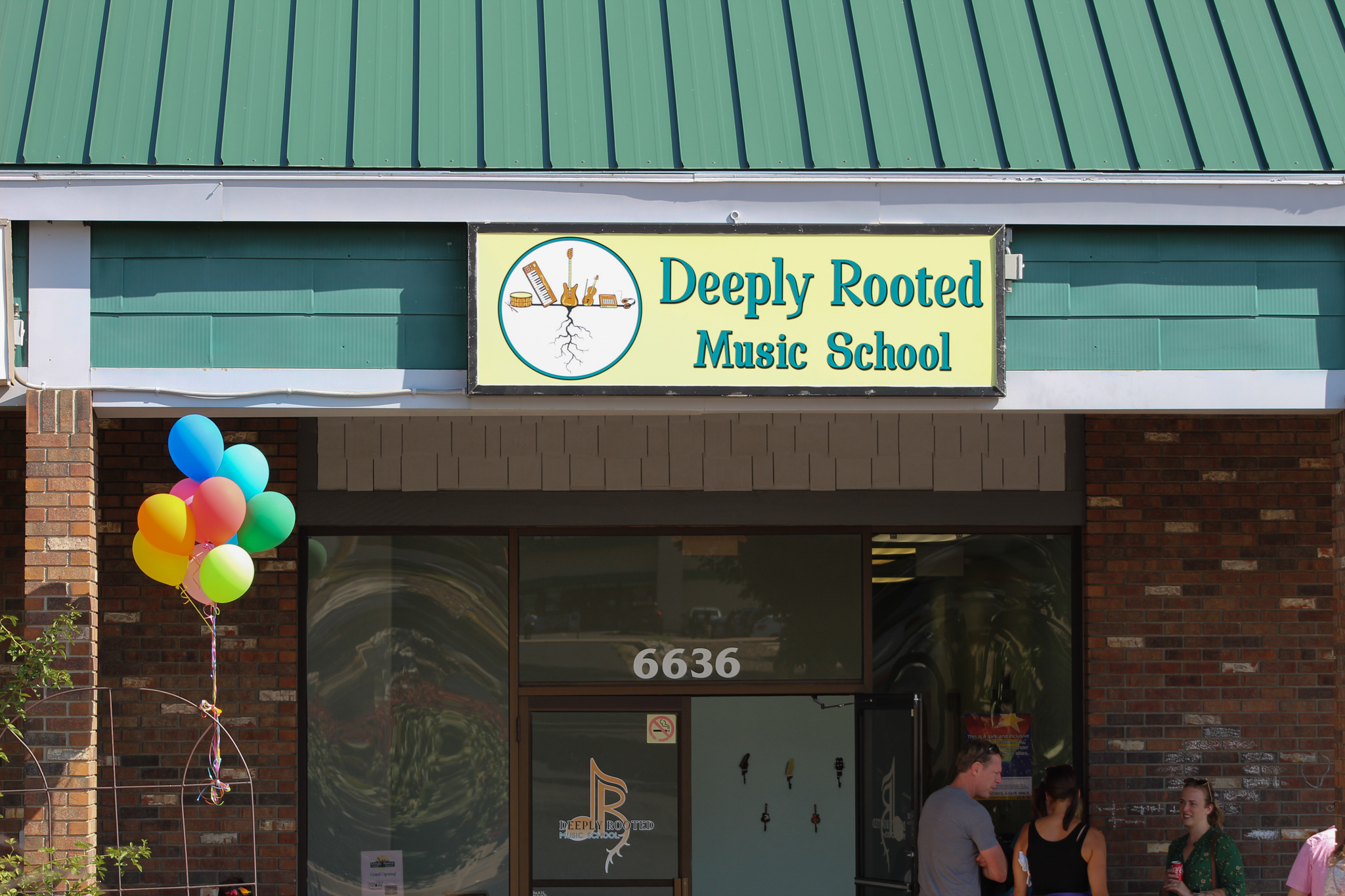 The school has six rooms including the lobby: Three are for individual lessons. One serves as a live room to collaborate and play in groups. And the last is a recording room, for students to familiarize themselves with the audio equipment used to edit their music once it’s written.

“I was not in that world at all with music technology,” Goodman explains. “I was strictly a violinist and elementary music teacher. In college, I took a music tech class and that was a whole aspect of it I didn’t know existed. I really wish I learned that when I was 12. I think I would have had a greater passion for music if I had done that. ” 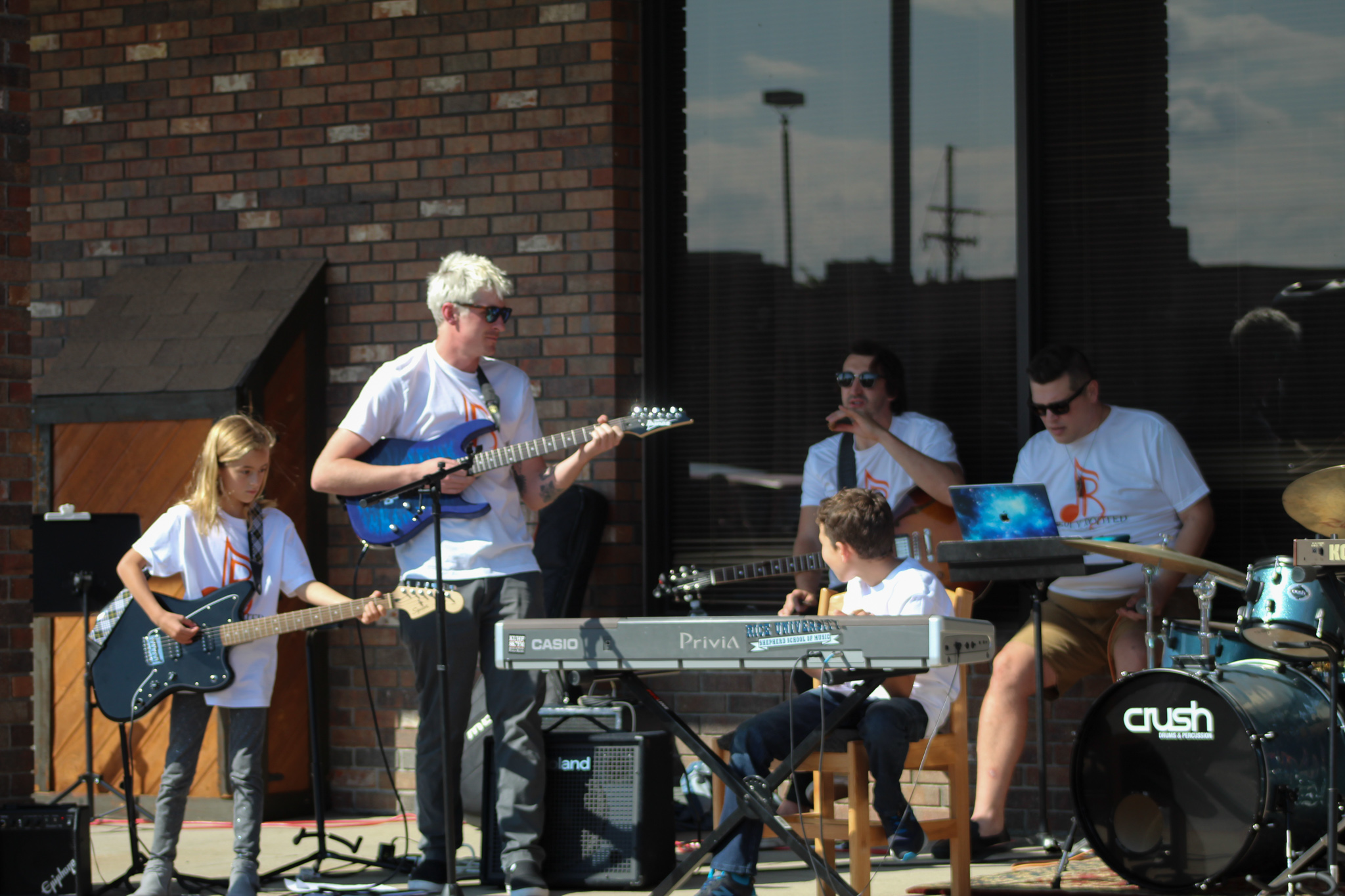 While giving their tour, they explained how crucial it was for their space to be inclusive and safe to any potential student that walked through their door. “I’m a transgender human being,” stated Zigman, “and the district was a difficult place to work. So when Sam and I started talking again, we had the same philosophy of what we wanted it to be. We wanted to create a place where our students and ourselves could be whoever we wanted to be — loud and proud.” Zigman shared his frustration in the suggestion to not share stories and lessons as an instructor. Lessons that he feels are a vital element to understanding music. He explained the unavoidable conflict between district policy and principles of music-making. With strict policies and lesson plans, there was no room for creativity or recognition of the individual.

Deeply Rooted Music’s goals came as a way to change the rigid and stale environment that schools often provide, while their philosophy encourages curiosity as a guiding principle in their teaching and, “an individualized curriculum for each student, including offering services for students with special needs and accommodations,  recognizing the contributions of historically marginalized groups such as LGBTQ individuals and people of color.” 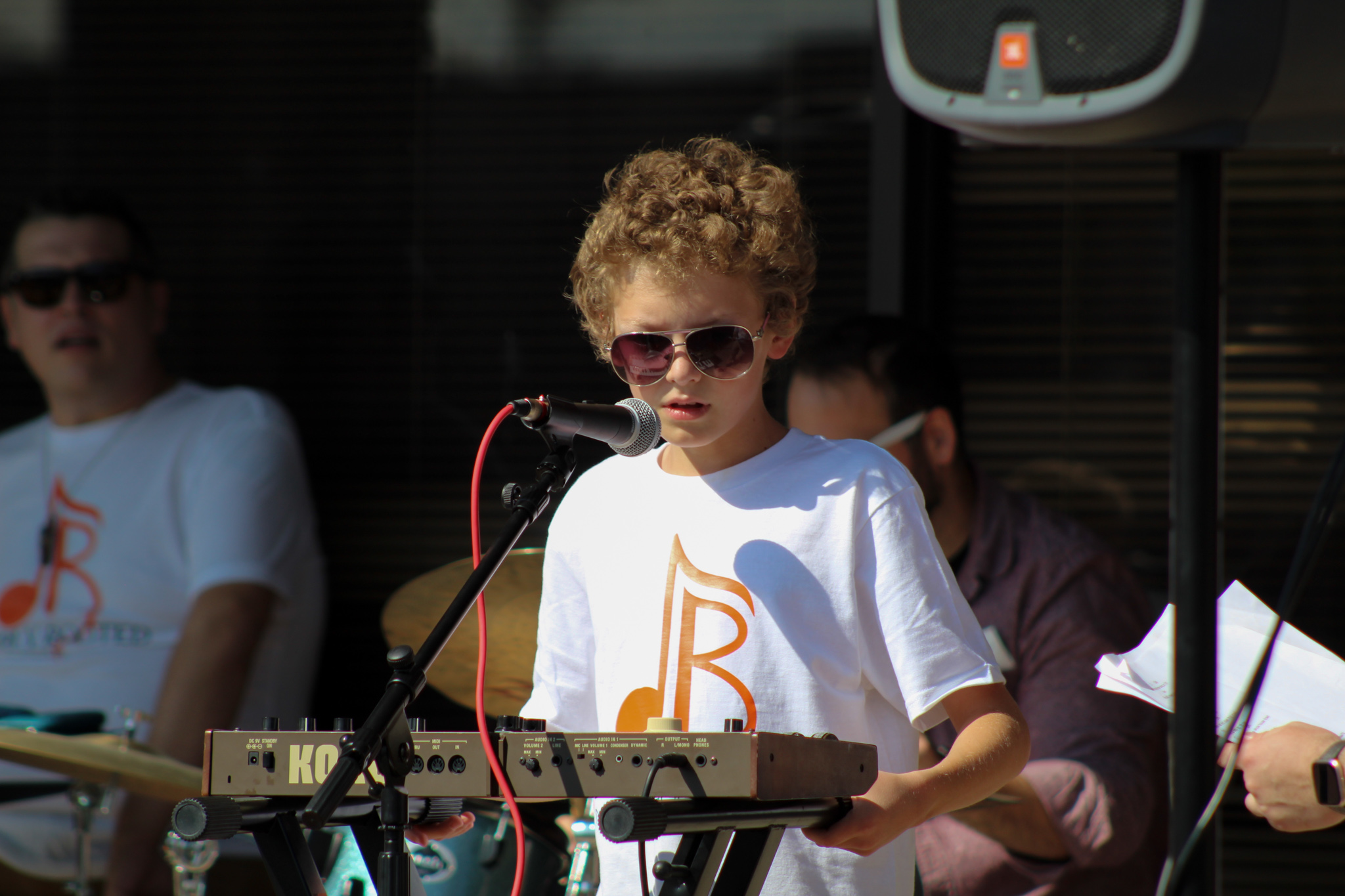 With instructors from diverse musical backgrounds, Deeply Rooted Music School offers a variety of lessons for all types of instruments and music genres including early childhood and workshops. Despite the nationwide isolation protocols in 2020, the timing worked to the school’s advantage. Had they opened the school when they originally desired, they would have had to close it soon after. Like many other instructors, the pair turned to online lessons and teaching to continue their work. However, with a hands-on subject that uses instruments, video calls aren’t as effective as in-person teaching. 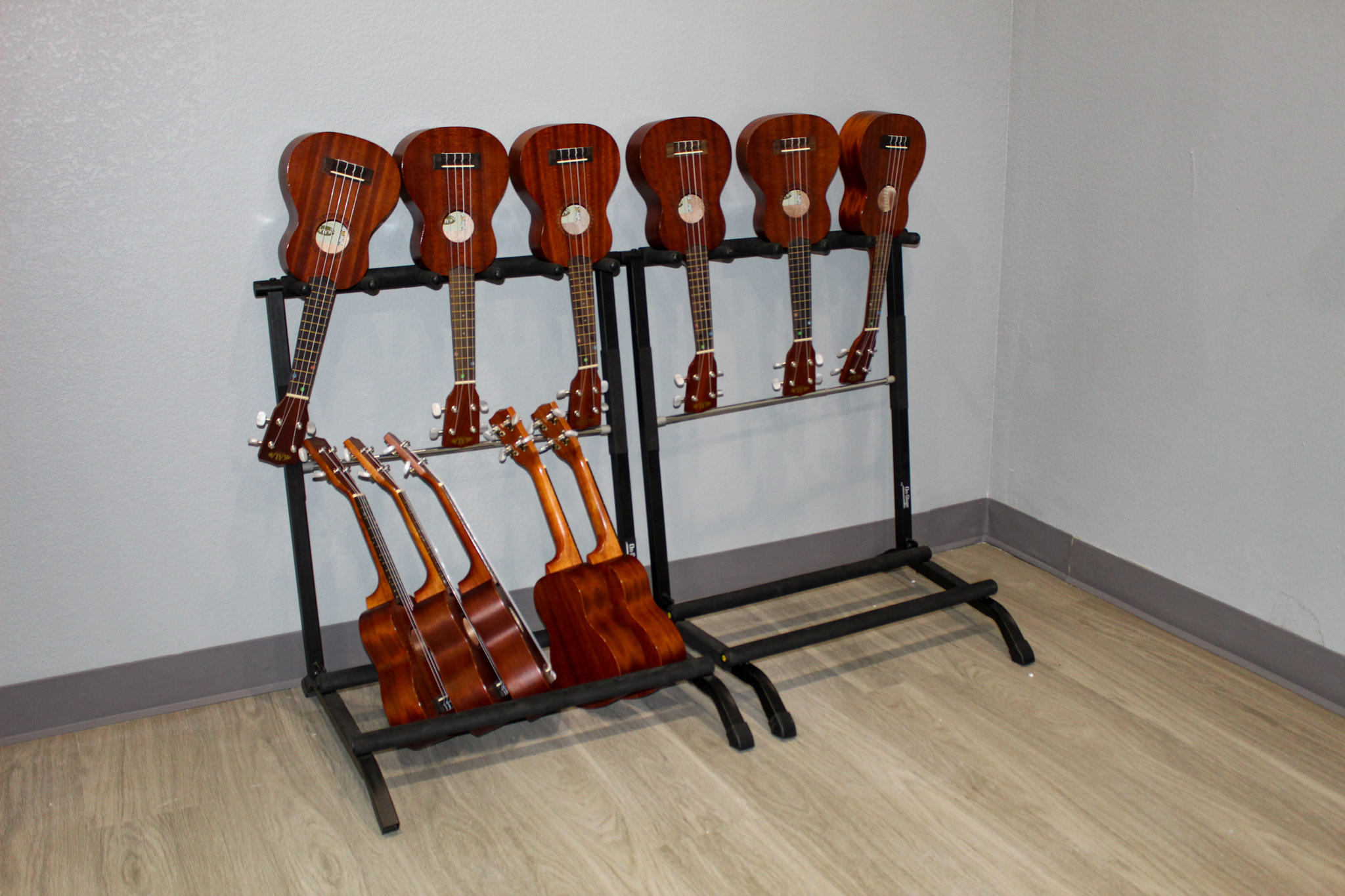 Ukuleles sit on a rack in the corner of the room.

Luckily, the fruits of their labor paid off— the two educators having taught privately and worked tirelessly to create the school, enrolled a handful of students before their building was even open. Thanks to the support of their family, friends and students the school is on the right track to increase the number of classes they offer. Although there are still obstacles that lie ahead of the two founders, the future looks lush for Deeply Rooted Music School and its students.